Fonio is the latest ancient grain to take the food scene by storm. Unlike other passing trends, however, this tiny gluten-free superfood has real staying power. This guide to fonio will give you its historic overview, plus lot of tips on how to buy and cook it, easy ways to use it, and links to recipes. 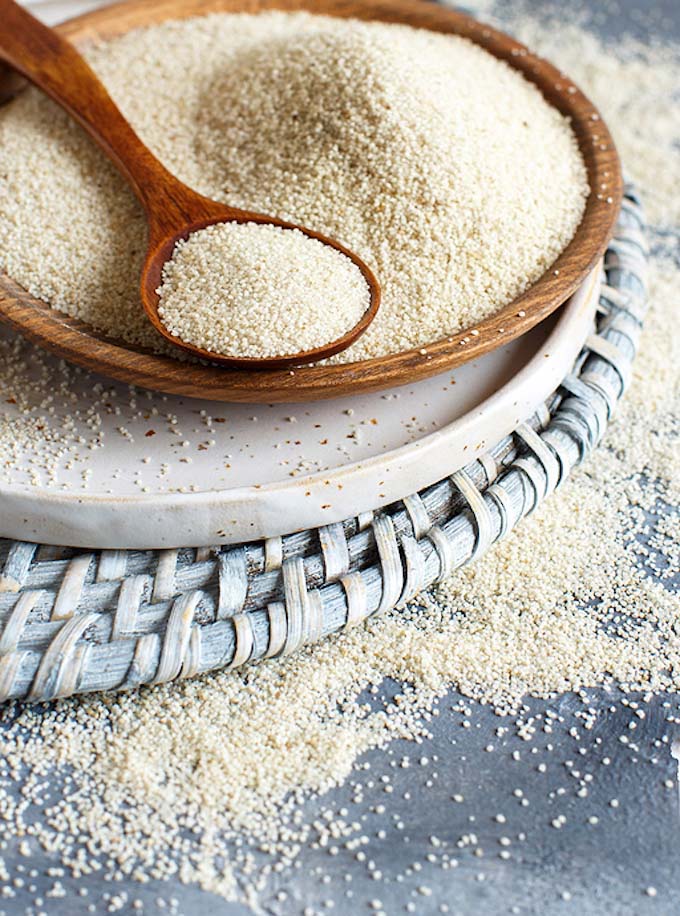 You may not have spotted it in grocery or natural food stores yet as it’s been slow to catch on in North America, but fonio is slowly making inroads and is readily available online. Appearing on menus across the globe, diners are eating it up and demanding a second serving.

What is Fonio and Where Did it Come From?

Though it’s regarded as a grain for simplicity’s sake, there are two types of fonio which are forms of millet, more accurately defined as cultivated grasses. Another example of this is teff, often used as the flour for injera, or Ethiopian fermented flatbread.

Grown primarily in North Africa, fonio has been a staple food in that region for millennia. It thrives in the harsh, arid conditions where few other crops could survive.

White fonio (digitaria exilis) is the variety most commonly seen outside of where it grows, nicknamed “hungry rice” by Europeans for its incredibly nutritious properties and ability to sustain populations otherwise on the brink of starvation.

Black fonio (digitaria iburua) has very similar properties, aside from the color, of course, and is grown primarily in Nigeria, Togo, and Benin.

To those who grew up in Senegal, Burkina Faso, Mali, and Togo in particular, fonio is much more meaningful than a mere food item. Fonio has always been treasured, often served at times of celebration. Survival often depends on this humble seed, so it’s especially popular for nourishing new mothers and growing children. 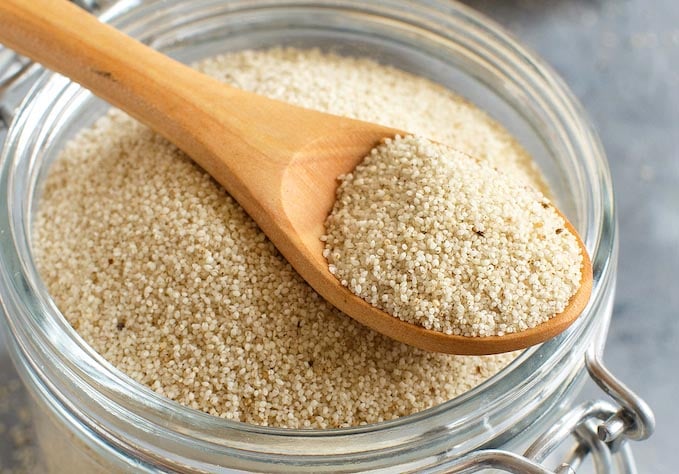 How to Buy and Store Fonio

Fonio is still a relative rarity in mainstream markets. You might have some luck combing through the aisles of packaged dry grains in health food markets, but your best bet is to search online.  Prices generally range from $12 to 20 per pound. One of the major packagers, Yolélé, has a great store locator.

Although it’s very inexpensive to grow, the harvesting process is incredibly labor-intensive. After being cut with sickles, the sheaves must be dried, threshed, washed, and then husked, traditionally all by hand. The more recent invention of the fonio-husking machine has simplified the process considerably, but this modern invention remains out of reach for rural farmers.

Most fonio found outside of Africa is carefully sourced to prevent depriving local communities of this live-saving crop. Packages are priced at a premium to provide fair wages to workers, to lift these families and their neighborhoods out of poverty. Seek out brands that aren’t necessarily the cheapest but promise the greatest percentages of sales will go back to the source.

Kept in a relatively cool, dark, and dry place in an airtight container, fonio is shelf-stable and will keep well for 1 to 2 years.

How to Cook Fonio

Fonio is similar to couscous in appearance and preparation. It cooks very quickly with little effort, so it’s an excellent side dish to boost many types of meals.

The basic ratio of water to fonio is 4 to 1; for example, 1 cup of water to every ¼ cup of fonio. Bring water to a boil in a saucepan, turn off the heat, and stir in the fonio. Cover and let rest for about 10 minutes, until the liquid has been absorbed. If any water remains unabsorbed, cook over very low heat for another 2 to 3 minutes. Fluff with a fork and it’s ready to serve.

As is, the flavor is earthy and subtly nutty, which makes it incredibly versatile, complementing a wide range of dishes and cuisines. To improve the flavor, toss with a splash of oil and a pinch of salt. You can swap it in for many other similar cooked grains at this point, such as quinoa, sorghum, rice, barley, and more.

Fonio can be cooked with a slightly greater proportion of water to create a breakfast porridge, best served with a touch of maple syrup and a pinch of cinnamon.

One of the original superfoods, fonio is a nutritional powerhouse. Especially high in fiber, it’s very satisfying and helps maintain healthy digestion.

Fonio is also an excellent source of B vitamins, including thiamine, riboflavin, and niacin, in addition to iron, copper, zinc, and magnesium, which can otherwise be difficult to source in its native lands. Believe it or not, fonio has the highest calcium content of all whole grains, which makes it a good choice for vegans and others who don’t consume dairy.

Fonio is gluten-free, providing an excellent alternative to couscous, which is wheat-based. Here is a complete nutrition profile of fonio. 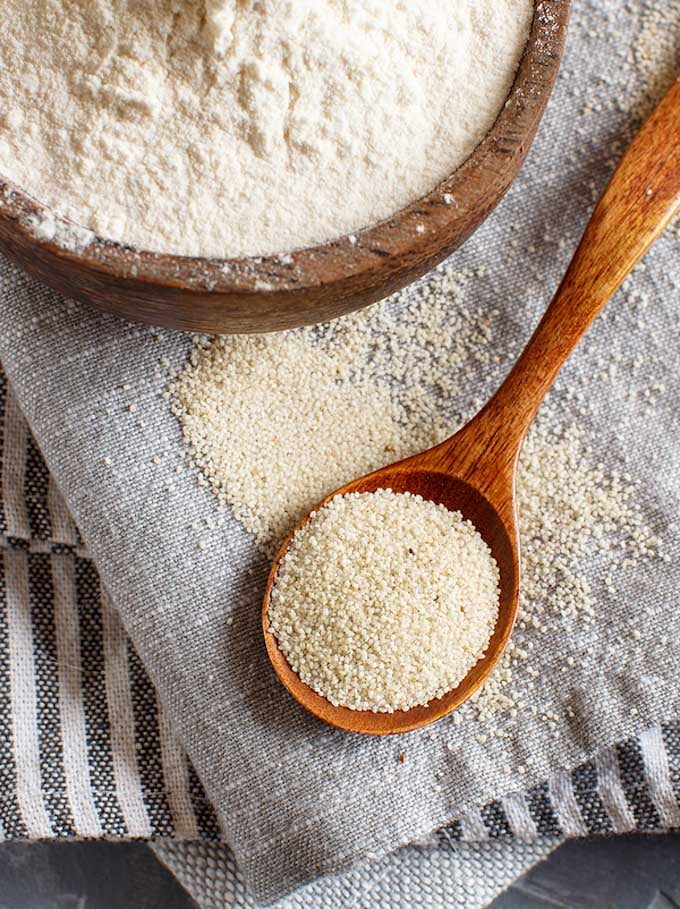 Fonio is sometimes milled into a soft flour

Salads: Once cooked and cooled, chilled fonio is a great addition to leafy salads, or used as the salad base itself. Tossed with dressing, it keeps well at room temperature, so it’s an excellent dish to take to lunch, work, or on a picnic.

Hot breakfast cereal: Cook fonio with additional water or plant-based milk to make a creamy oatmeal replacement with a delightfully nutty taste. Sweet as desired and try topping with fresh or dried fruits, toasted nuts or seeds, or any of your favorite accompaniments

Pilaf: Use vegetable or mushroom stock instead of water to create a savory side dish. Use herbs and spices that you would typically pair with your favorite rice preparation. Sautee a bit of onion and garlic in olive oil first to layer in the flavor.

Grain bowls: Move over, brown rice; fonio is fantastic as the foundation of any Buddha bowl. Either warm or chilled, top the cooked fonio with an assortment of greens, beans, vegetables, and sauce. Don’t forget the avocado on top!

Quicker “cheese grits”: Cook with extra vegetable stock and a touch of vegan cheese for a delightful twist on the traditional southern staple. Fried okra, vegan sausage, or simple beans are all great ideas for toppings. If you make the “grits” in advance and let them cool in a loaf pan, the mixture will set into a firm but still soft block. It can then be sliced and grilled or pan-fried for even greater textural contrast.

Soups and stews: Add fully cooked fonio after your favorite soup is done cooking, to prevent the broth from getting cloudy or the fonio from becoming overcooked. Think of it as a whole grain minestrone, or blend it into creamy soups for a smooth, naturally thickened base.

Smoothies: If you’re having trouble getting enough fiber into your diet, try adding ¼ cup of cooked fonio into your favorite smoothie blend. This works best with more strongly flavored mixtures, like those with chocolate or spices. 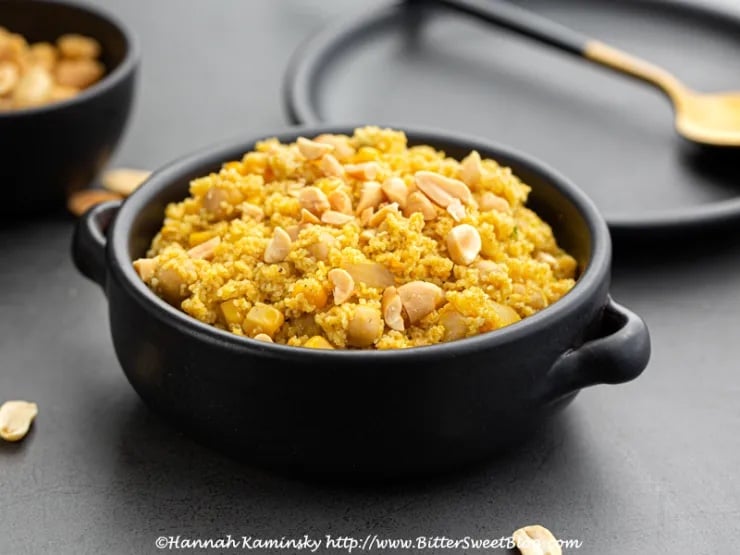 Previous Post: « 12 Vegan Cheese Brands to Look for on Your Next Shopping Trip
Next Post: Vegan Buffalo Chicken Salad »