Don’t freak out, but there’s a hot whole grain that has the culinary world buzzing. What is freekeh, you might ask; it’s a form of cracked durum wheat with a smoky flavor. This guide has tips on how to cook freekeh, with ideas on how to use it and links to recipes. 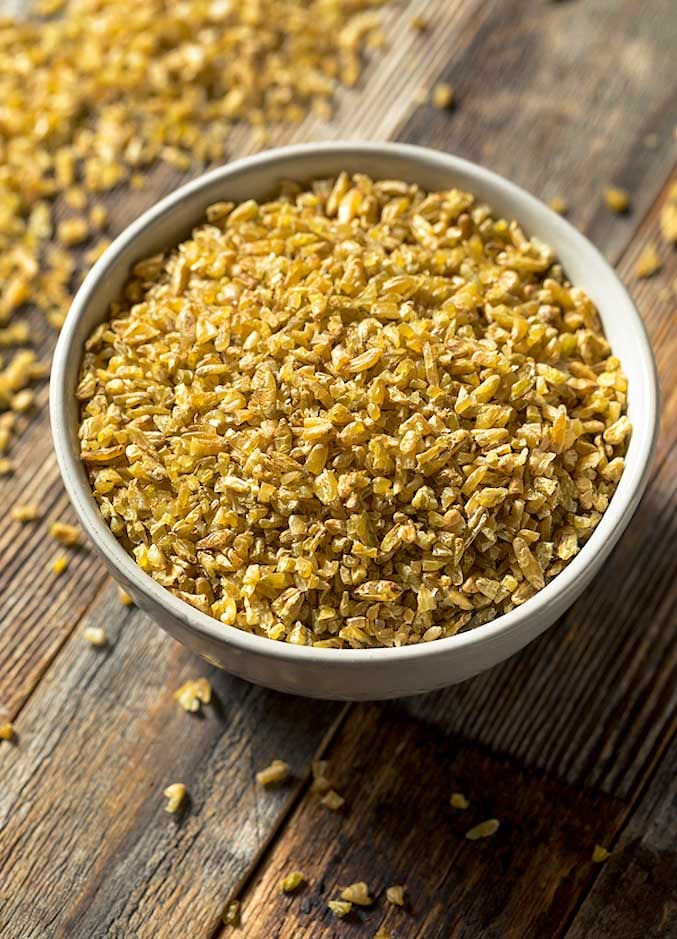 Often mentioned in the same breath as other grain heroes like quinoa, spelt, amaranth, and farro, there are still many misconceptions about this versatile ingredient. Whether you call it freekeh, frikeh, farik, or fireek, it’s always versatile and tastes great.

What is Freekeh and Where Did It Come From?

Unlike other popular whole grains, freekeh is not a wholly separate, unique strain. It’s hard durum wheat that’s been harvested early, while the grains are still tender and green. The kernels are then roasted or smoked, dried, and polished.

This process is what defined freekeh, giving it a distinctive woodsy toasted flavor and toothsome, al dente texture. The bran is partially removed to make them more easily digestible yet still retain a good amount of fiber.

The earliest records of freekeh can be traced back to approximately 2300 BCE. As legend has it, when a Middle Eastern village came under enemy attack, their crops of immature wheat caught fire during the siege.

Thrifty farmers were able to salvage most of the harvest by rubbing away the burned chaff, revealing aromatic roasted wheat kernels inside. Thus, the word “freekeh” roughly translates into “to rub” or “the rubbed one” in Arabic. Though the exact origin is disputed, freekeh has long been a staple in Jordan, Egypt, Lebanon, and Syria especially. 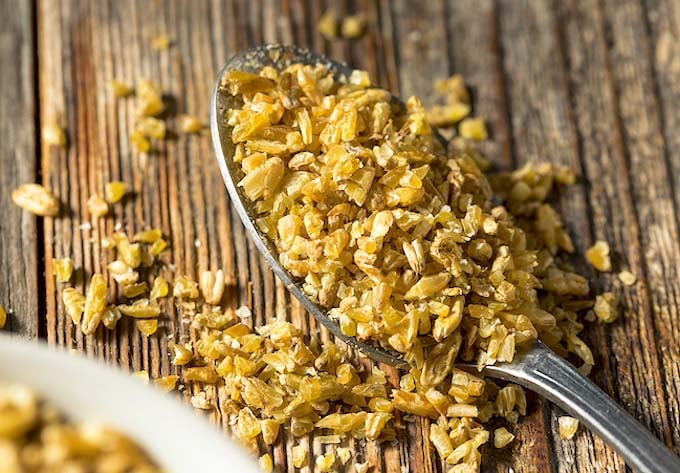 How to Buy and Store Freekeh

Cracked: Similar to the way that steel-cut oats are processed, the grains have been mechanically chopped into smaller pieces. How fine or coarse the texture is can vary greatly by the manufacturer. Since the pieces are smaller, they cook relatively quickly.

Whole: This is the whole intact wheat berry, very similar in size and shape to whole barley. The texture is smoother, chewier, and firmer, and not surprisingly, takes longer to cook.

You can find freekeh in well-stocked natural food stores and specialty markets (such as Middle Eastern) alongside the rice and other dry grains. When in doubt, search online for where to buy freekeh. Top purveyors include:

Expect to pay roughly $10 to $15 per pound. Freekeh costs somewhat more than common varieties of whole grains because production has yet to be fully modernized. More labor is involved than just standard wheat, and it’s not possible to produce in volume.

Store dry freekeh in an airtight container in a cool, dry, dark place almost indefinitely under the right conditions. 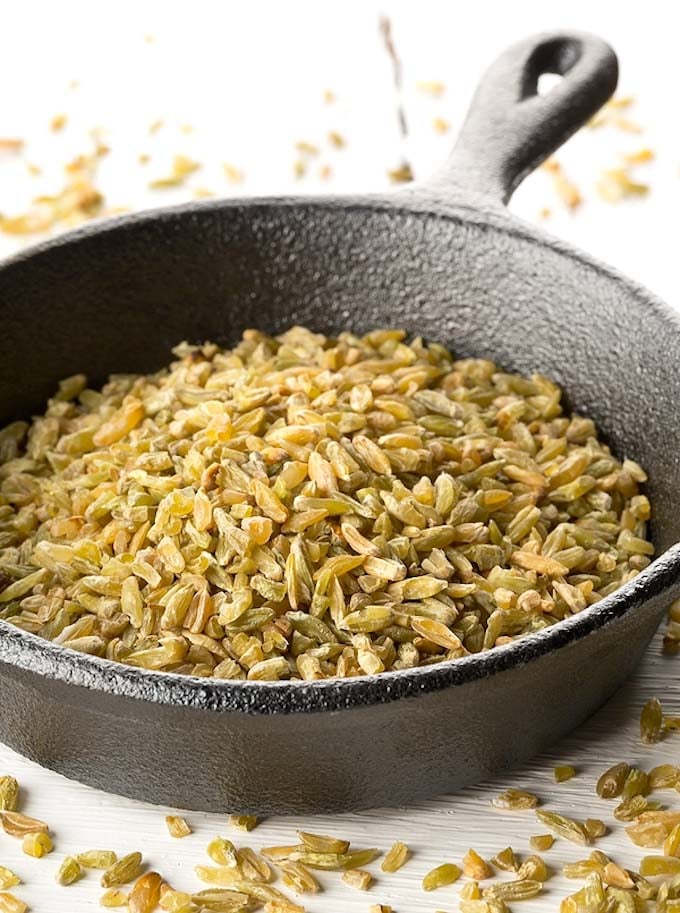 How to Cook Freekeh

Freekeh is cooked using the same method as rice or quinoa, but the amount of water to grain may vary slightly depending on the manufacturer. Always defer to the instructions on the package, but generally speaking, you’ll want to use 2 ½ cups water to 1 cup of freekeh. Bring the water to a boil, add the freekeh and simmer gently.

Cracked freekeh may be done in as little as 10 minutes, while whole freekeh could take closer to 30 to 40 minutes. Monitor the pot closely and when the liquid is mostly absorbed, turn off the heat, cover, and let steam for an additional 5 minutes.

Taste to make sure the grains are tender. If there’s still excess liquid at this point, simply drain it away. Fluff with a fork and serve hot, or chill and serve cold.

Even if you buy cracked freekeh, it’s a complete, whole grain that’s high in fiber and prebiotic starches, which enhances digestion and contributes to the feeling of fullness and satiety. Freekeh has the edge on the competition, with more fiber than either brown rice or quinoa, but fewer calories and carbs.

Because freekeh is a type of wheat, it is not gluten-free, and so, not suitable for those with that type of dietary restriction. Read a complete view of its nutrition profile and benefits. 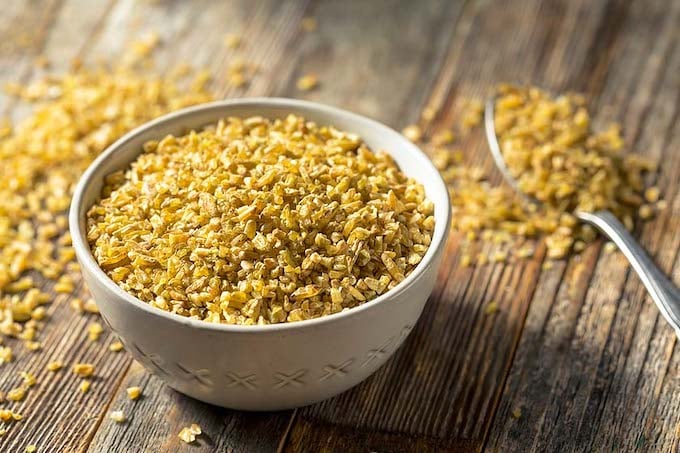 Salads: You could very easily toss a small quantity of cooked freekeh into your favorite leafy salads, though it really shines in Middle Eastern preparations. Use it in place of bulgur (another type of cracked wheat) to make tabbouleh. Since it keeps well hot, cold, or at room temperature, freekeh is a great choice for making grain salads to take on the go.

Soups: Think of barley and mushroom soup, but with whole freekeh as the featured grain instead!

Instead of kasha: Since it has a similar flavor profile to toasted buckwheat, freekeh can be a nice change of pace to use in recipes that traditionally call for kasha. Kasha with varnishkes (bowtie pasta) is one of the most popular dishes.

Granola: Make your own superfood cereal by baking cooked freekeh into your favorite granola recipe, replacing up to 1 cup of rolled oats with the cracked wheat. Enjoy it as is served with plant-based milk, made into granola bars, or sprinkled on top of vegan yogurt.

Stuffing for vegetables: Fill up bell peppers, cabbage rolls, zucchini boats, and more with cooked and seasoned freekeh before baking. The vegetables will become fork-tender and the grains will infuse even more flavor into each bite.

Risotto: Cook whole-grain freekeh just like rice to make a creamy, savory main dish. Since freekeh is a bit harder and less starchy, you may want to add a touch of cornstarch or pureed cashews for extra thickening power.

Pancakes: Toss cooked freekeh into the blender and puree with plant-based milk, sweetener, and baking powder until smooth. Ladle this simple batter onto a hot skillet or griddle for a hearty breakfast treat.