Black forbidden rice is an heirloom medium-grain rice that is native to Asia. It’s now used in a variety of cuisines around the world, thanks to its mild flavor and chewy texture. In this guide to black forbidden rice, you’ll find tips, ideas for using, and links to recipes. 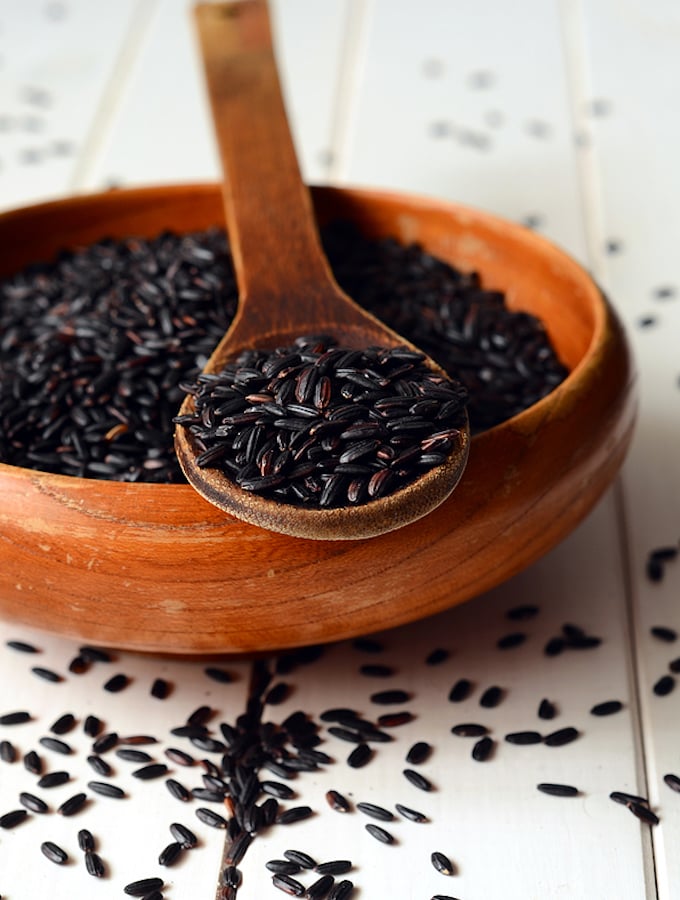 Black rice has a slightly sweet, nutty flavor and has been eaten throughout the region for thousands of years. The grain’s dark purple hues come from high levels of the antioxidant, anthocyanin which is also responsible for the deep coloration of eggplant, blueberries, and grapes.

The bran hull of black rice contains one of the highest concentrations of anthocyanin found in any food. It also contains the most fiber and protein of any other grain variety.

While many whole grains like barley, wheat, and rye include gluten, black rice is a naturally gluten-free grain that is an excellent choice for those who have celiac disease or gluten sensitivities.

The History of Black Rice

Black rice, often referred to as “forbidden rice” or “emperor’s rice,” got its name because it was originally reserved for the Chinese emperor. In ancient China, black rice was considered so valuable that it was forbidden to all but the nobility.

Black rice is significantly harder to grow than any other rice variety because it only yields about ten percent of the harvest that other rice varieties do. Due to the grain’s low yield, it is more expensive — which is why it was originally reserved for the Chinese emperor at the time it was first discovered. See a thorough history of black forbidden rice here.

Originally grown in China and Indonesia, black rice has cultivated its way all the way to parts of North America and Europe. Due to its rising appeal in Western fare, it is now grown in some parts of the southern United States as well. Today, it can be found in most well-stocked supermarkets and natural food stores. 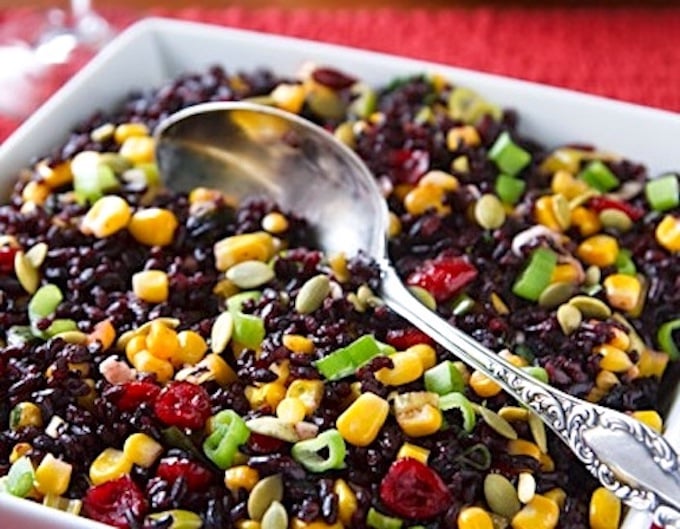 There are more than twenty varieties of black forbidden rice. The two that are most common in the United States are traditional Chinese and Japonica black rice: 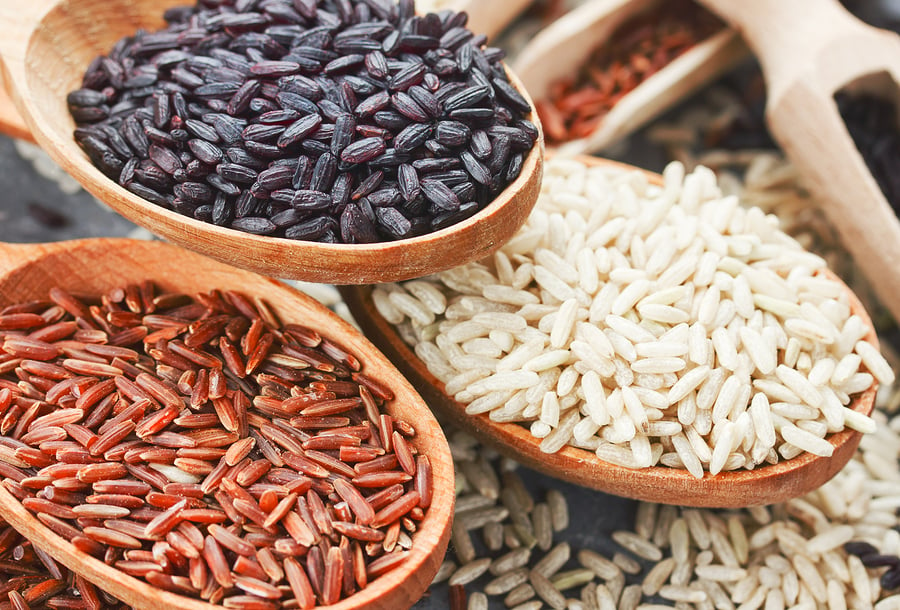 Black rice is sold as a whole grain, with the outer most layer of bran intact. Whole grains are unrefined, which means that they aren’t stripped of their nutritional value during the milling process. Therefore, the antioxidants, vitamins, minerals, and fiber content of black rice is preserved.

A ½ cup of prepared black rice contains 160 calories and 1.5 grams of fat per serving. Rich in protein and fiber, a ½ cup of forbidden rice has 4 grams of protein and 1 gram of fiber, making this grain a nutritional powerhouse. Here is more detailed information about the health benefits of black forbidden rice.

You might be able to find black rice varieties in well-stocked natural foods stores and Asian groceries, but if not, there are plenty of online sources for purchasing it. Some brands include Lotus Foods, Lundberg, Earthly Choice, and Thrive Market.

To prevent rancidity of the rice oil in the bran, unprepared rice should always be stored in a cold, dry environment. Store black forbidden rice in a dark cabinet on a shelf away from the stove, or you can even keep it in the refrigerator.

Black Rice Flour: Another black rice product is this gluten-free flour made from unpolished grains, retaining their original rice bran and hence providing additional nutrients. This flour has a subtle, nutty flavor and works best on its own to make baked goods such as cake, bread, muffins, and even pancakes.

How to Cook Black Forbidden Rice

Black forbidden rice is prepared similar to other types of rice. One difference with black rice is that it takes several minutes longer to cook than other rice varieties. Here are the basic steps:

Use 2 parts water to 1 part black rice. Combine the grain and the water in a medium saucepan.

Bring the water to a slow boil, then lower the heat and allow the rice to simmer, covered (leave the cover ajar), until the water has been absorbed, about 35 to 40 minutes. If the rice isn’t done to your liking,

Here are two variations detailing how to cook black rice:

Ways to Use Black Forbidden Rice

Swap it in: For a more intriguing presentation and a nutritional boost, simply replace white rice in recipes and dishes with black forbidden rice.

Veggie dishes and rice bowls: Combine your favorite vegetables with a generous serving of black rice for a hearty and delicious rice bowl.

As a side dish: Black forbidden rice can be served as a simple side dish just like you would normally serve any brown or white rice.

In Buddha Bowls: For a dramatic touch, use black rice in Buddha bowls. You’ll find plenty of ideas for beautiful Buddha bowls you can make without a recipe.

In burritos and wraps: A small amount of prepared black rice adds a pleasant, chewy texture to several burrito and wrap varieties.

To make sushi: Since black rice is naturally a little bit sticky, it’s perfect for making sushi at home. It will result in a dramatic presentation!

In desserts and puddings: Try using black rice to make these pineapple rice pudding cups or substitute it for Thai sticky rice in this recipe for instant pot Thai mango sticky rice.

Thanks to the bloggers who participated in this roundup for permission to reprint their photos and link to their recipes. 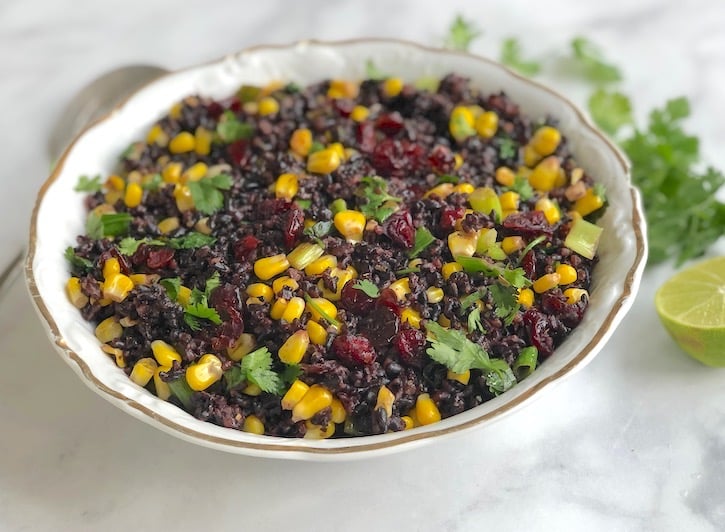 Festive Black Rice with Corn and Cranberries: This pilaf is made colorful with corn, cranberries, and herbs. It’s easy enough for everyday meals and festive enough to serve as a winter holiday side dish. 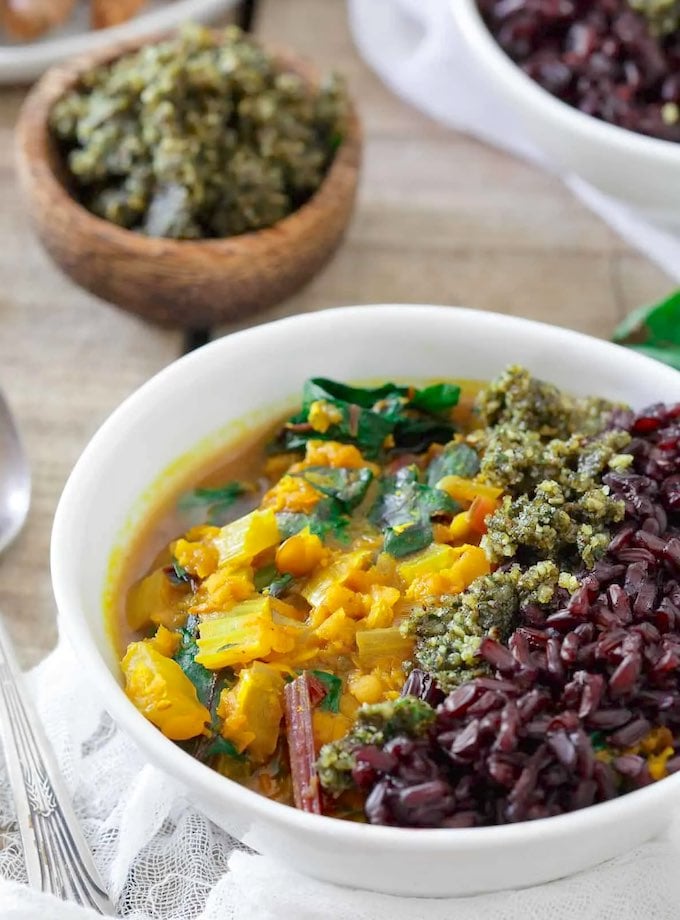 Turmeric Lentil Stew: From Running to the Kitchen, this stew is served with black rice for a hearty, health packed, comforting vegetarian meal. 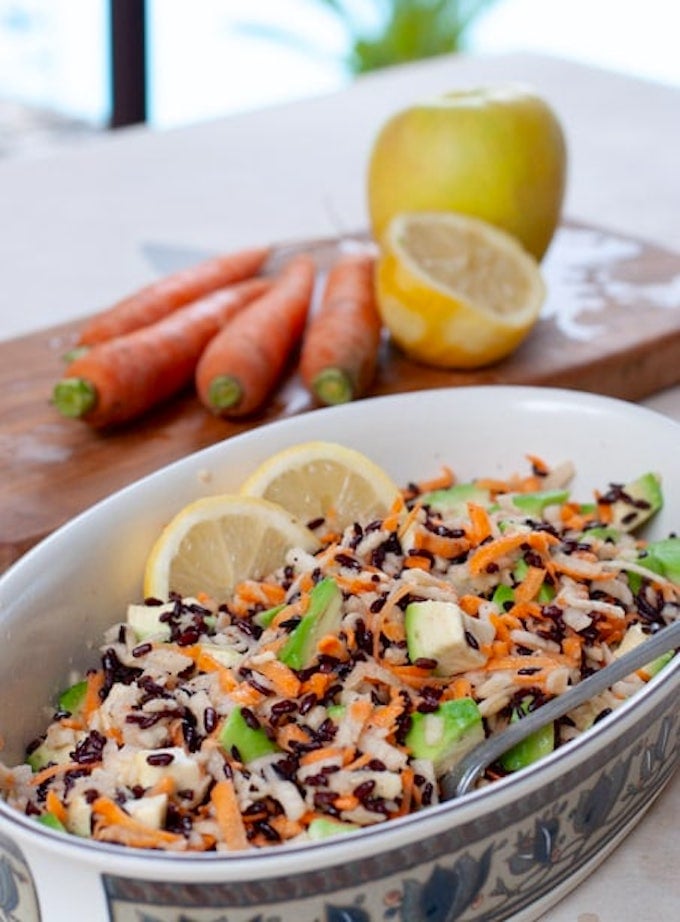 Black Rice with Apple Avocado, and Carrots: From Your Guardian Chef, This black rice recipe, not only is simple to make and fresh for the summer, it is also full of healthy vegetables and fiber. A vegan meal that can be served as main or as a side dish for a barbecue dinner. 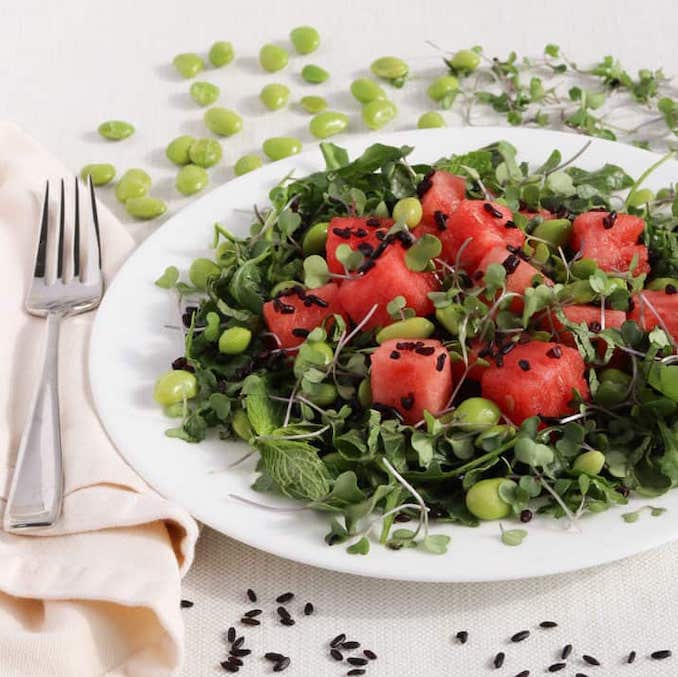 Watermelon and Forbidden Rice Salad: From Healthy Midwestern Girl, a dish that’s so satisfying and SO pretty,  just about anyone would be delighted to see it on their plate. 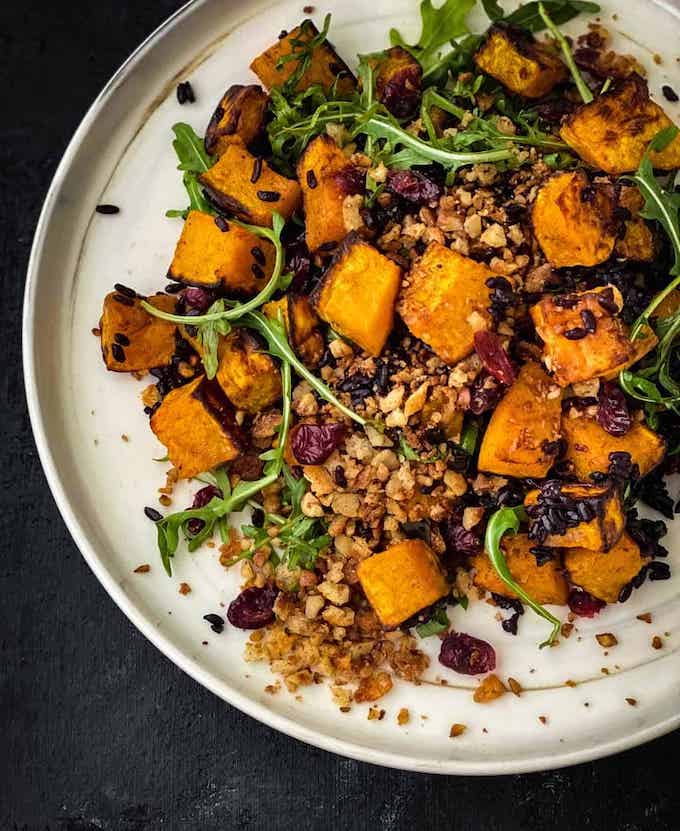 Vegan Salad with Butternut Squash and Cranberries: From The Devil Wears Salad, sweet roasted butternut squash together with dried cranberries, black rice, arugula and a crunchy toasted pecan crumb makes a delicious vegan salad recipe that will shine at all your dinner feasts. 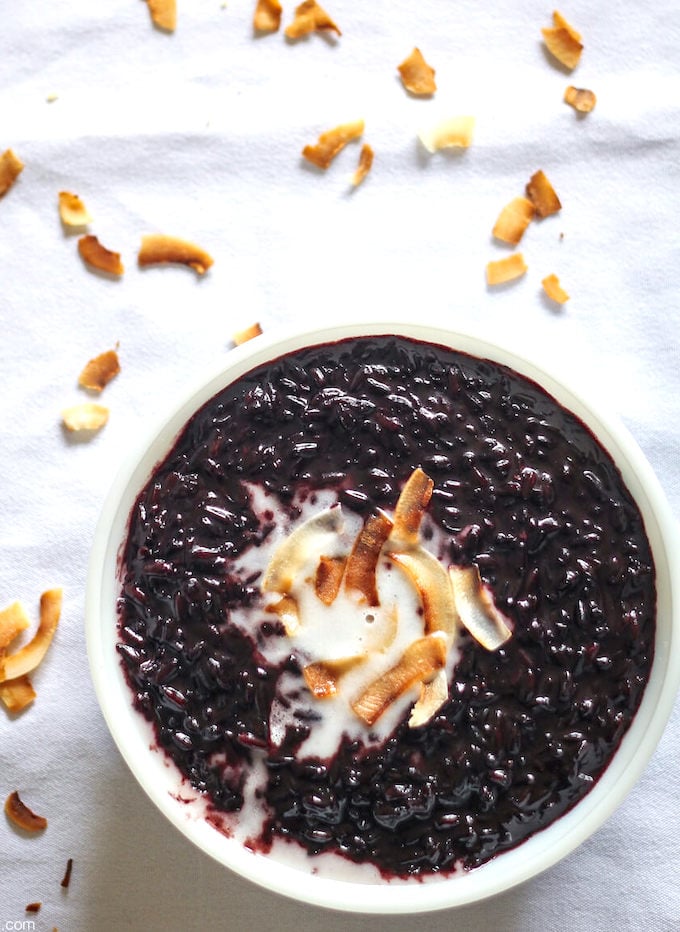 Coconut Black Rice Pudding: From Christmasphere, here’s a sweet, slightly chewy, and utterly delicious. It looks incredibly striking when served for dessert with a drizzle of coconut cream and toasted coconut flakes. 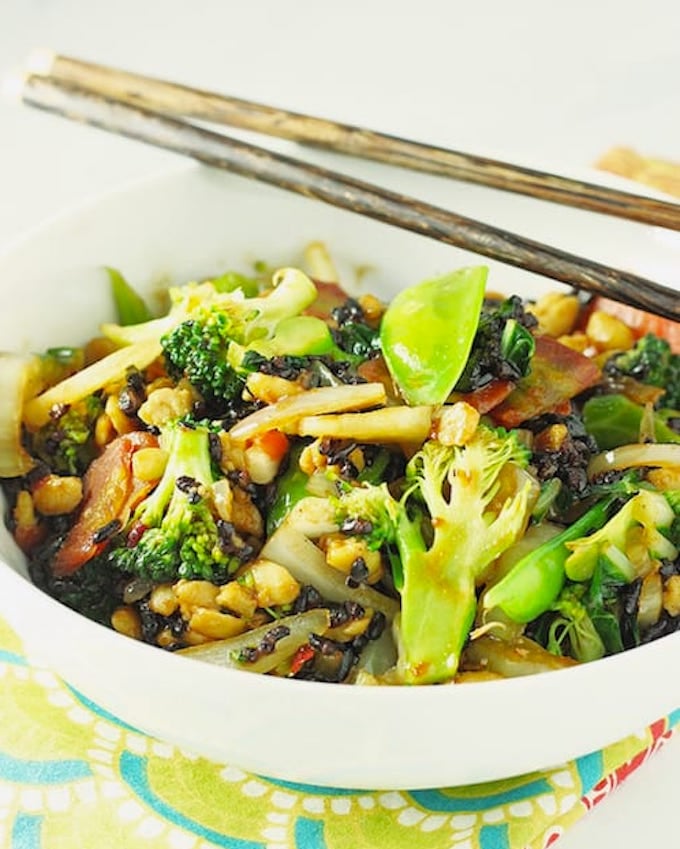 Forbidden Rice, Tempeh, and Vegetable Power Bowls: From Craving Something Healthy, these easy-to-make power bowls are packed with flavor and color. And they’re so good for you!

Here are more vegan black forbidden rice recipes from around the web:

Contributed by Anna Fiore: Anna is a 2021 graduate of SUNY-New Paltz, majoring in Communications, with a concentration in Public Relations and a minor in journalism. She is an advocate of environmental sustainability and clean eating.