Are you ready to ditch dairy and make the switch to vegan cheese? There are many more brands to choose from than there were not so long ago, and they’ve gotten better, too. Here we’ll explore a dozen popular vegan cheese brands. 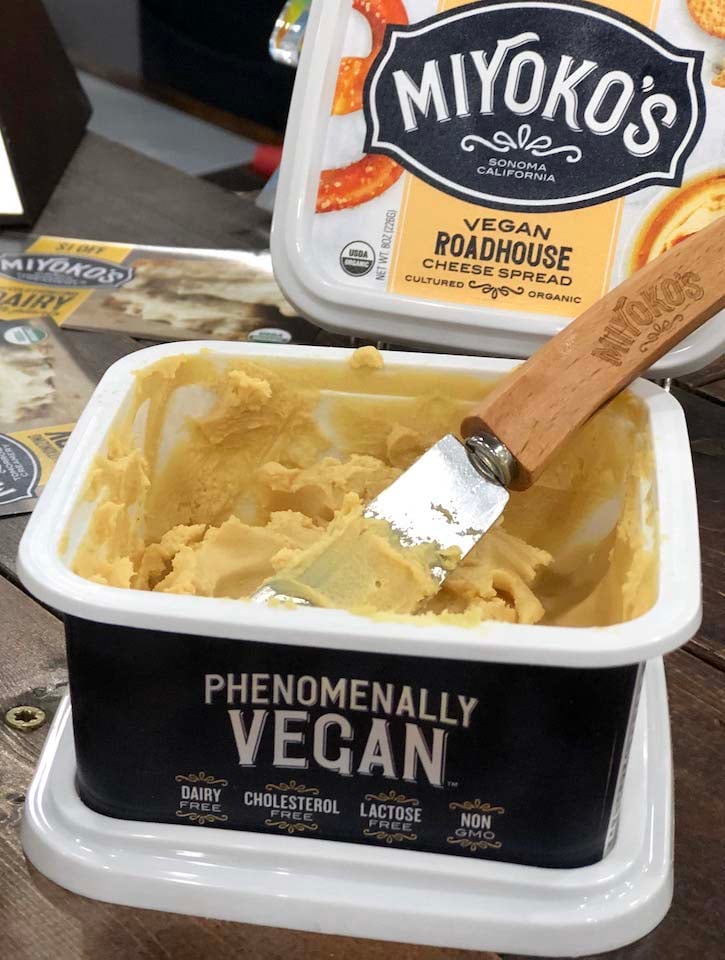 A mere decade ago, if you so much as mentioned vegan cheese to a mixed audience, the best you could hope for was polite silence. It was long cited as the sole reason that countless otherwise compassionate eaters couldn’t make the full transition to veganism: “I could never give up cheese!”

That’s no longer the case, however, as hundreds of brands worldwide are making the case, especially if you factor in the small batch artisanal plant-based cheeses are focused on local distribution.

Diverse and plentiful, just like their dairy-based counterparts, there’s a flavor and format for every cheesy craving — shreds, slices, blocks, spreads, and more. So, where should you start when you begin shopping for dairy-free cheese? Here are the twelve of the most widely available brands to look for North American supermarkets and natural foods store.

If you link though to company websites, check to see if they have a store locator to make your quest easier. Barring that, you can also explore online sources. The animals, planet earth (and very likely, your stomach) will thank you for making the switch from dairy to plants. 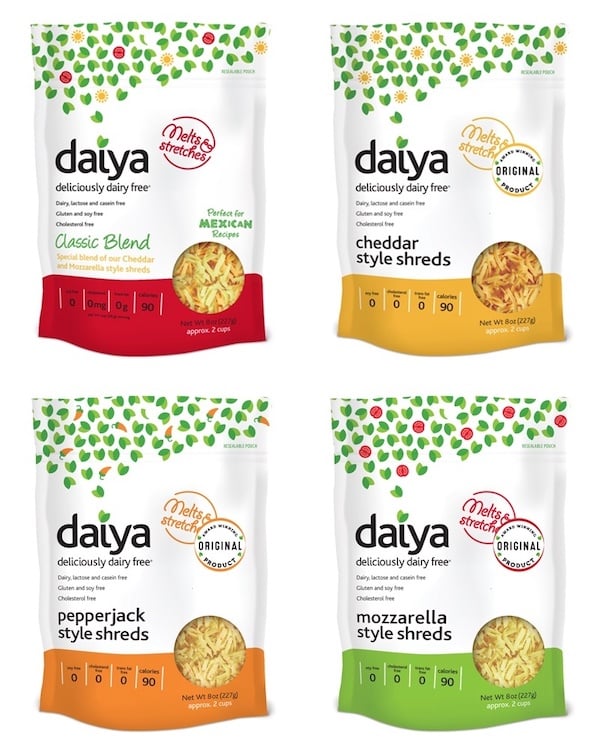 Daiya: Pronounced DAY-uh, this Canadian company was likely the first taste of cheese for dairy-free eaters since 2007. Reaching mainstream appeal long before most people even consider having an alternative option to reach wider audiences, it’s the reliable staple cheese stocked by most restaurants in North America.

The formula has changed considerably over the years, evolving and improving as the movement picked up steam, creating the most accessible, meltable option around.

Made primarily from coconut oil and tapioca flour, they’re notably nut-free and gluten-free for mass appeal. Sold in almost all grocery stores nationwide, these shreds, slices, and blocks will never let you down. Daiya also provides the cheesy component in many other vegan products, such as Amy’s frozen mac and cheez and Gardein’s breakfast bowls. 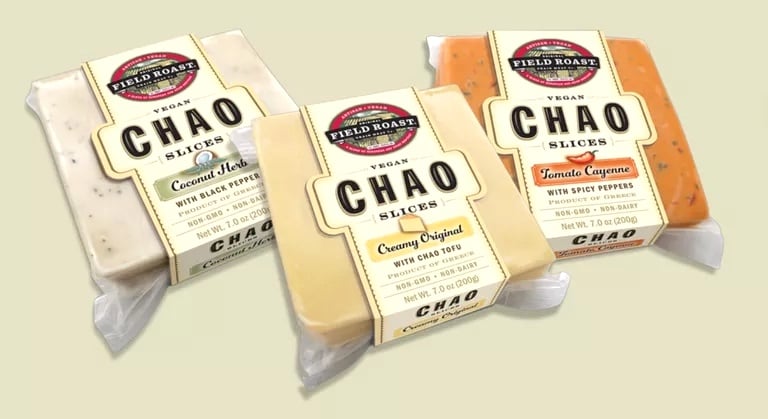 Field Roast Chao: Though best known for their meatless roasts, sausages, and other seitan specialties, Field Roast has expanded into the world of dairy-free cheese with its unique Chao Creamery line. Sold as shreds, slices, block, and even prepared, frozen mac and cheese, it blends coconut oil and starches with fermented tofu for a distinctly sharp, funky, and savory flavor.

The options vary from mild to wild, with traditional cheddar tastes or unmatched tomato cayenne to instantly elevate any dish. In case you need more recipe inspiration, they even have a cookbook, featuring their own products of course, but also plenty of homemade options.

You can Chao down across the country and find these cheesy options in most grocery stores, in addition to Costco and Target. 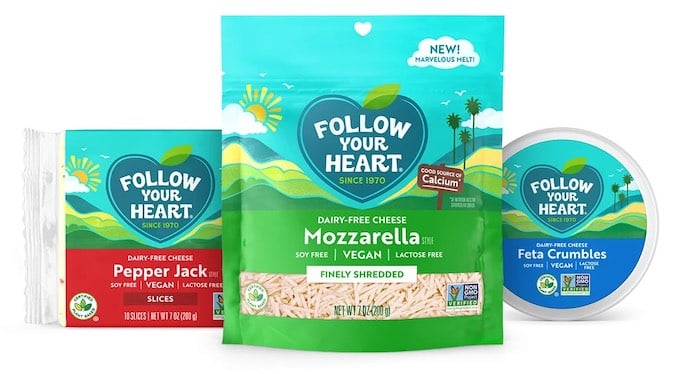 Follow Your Heart: If there’s one cheesemaker that’s been around the block and back, it must be Follow Your Heart. Founded in 1970, it began as a restaurant in Canoga Park, California. Seven years later, they began producing Vegenaise, one of the first (and still best) plant-based mayonnaise alternatives on the market.

Then came creamy dressings, egg substitutes, and just in the past decade, they began to explore the cheesy world of shreds, slices, blocks, and crumbles.

Nearly any store in the US that sells food will have at least one product from this extensive brand that’s withstood the test of time. To get the most options though, including their newest items, your best bet is to check out Whole Foods. You won’t want to miss their incredible blue cheese, for example, which is authentically funky and deeply savory. 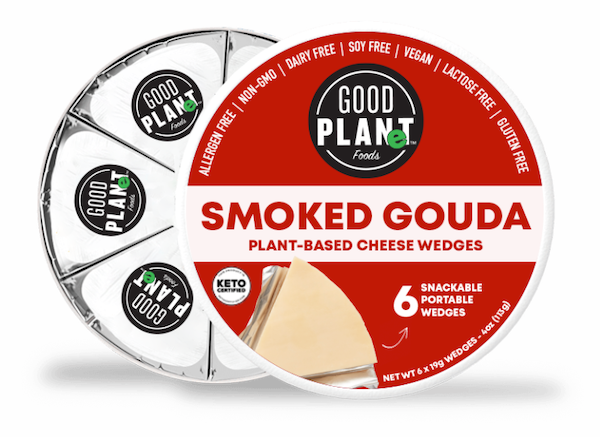 Good Planet: Although Good Planet keeps it basic with Mozzarella, Parmesan, and Cheddar shred in addition to American, Pepper Jack, Provolone, and Cheddar Slices, their latest innovation is easily their greatest. Stepping up to the plate with “snackable wedges,” these are the first direct competitors to Laughing Cow cheeses.

They’re keto certified and come with six wedges to a package, individually wrapped for on-the-go convenience. Creamy Original, Pepper Jack, and Smoked Gouda will be coming to a store near you soon. Until then, you can purchase them online through Vegan Essentials. 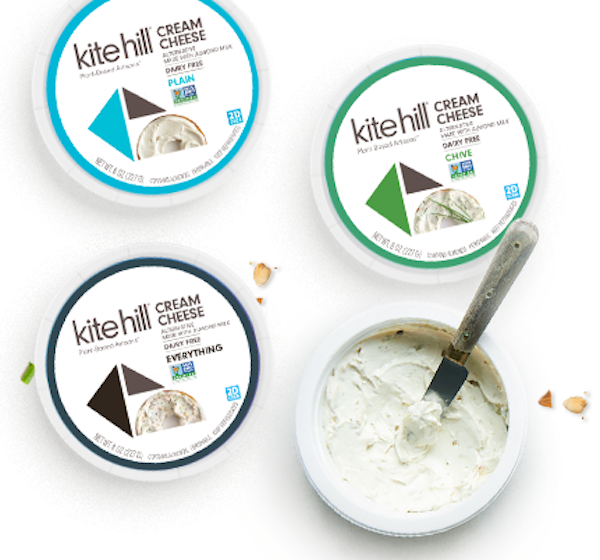 Kite Hill: California almonds are the foundation of this dairy-free empire. Kite Hill didn’t take the path of a typical cheese operation, beginning life with simple almond ricotta made from only nuts, salt, and natural cultures. Following that breakthrough hit, they developed sour cream, yogurt, butter, dips, and some of the only vegan tortellini and ravioli on the mainstream market in America today.

That award-winning dairy-free ricotta alternative is incredibly versatile. Though you wouldn’t snack on it solo, it’s indispensable in savory recipes such as lasagna, or instead of mascarpone in desserts. 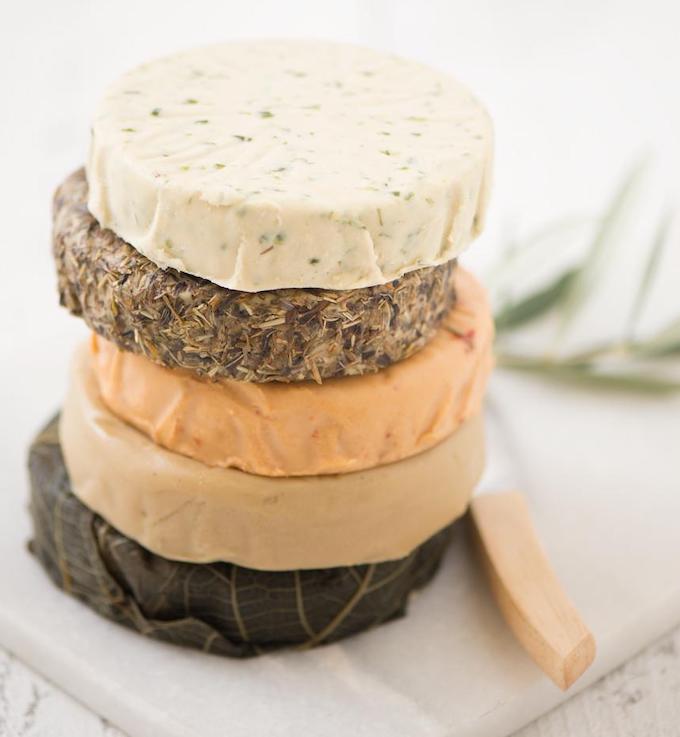 Miyoko’s Creamery: Vegan author, entrepreneur, and luminary Miyoko Schinner has built this dairy-free creamery from the ground up, on a mission to revolutionize the dairy industry. By all measures, she’s winning that battle. She’s proving that dairy-free ingredients are just as good, if not better than their traditional counterparts.

Credited with creating the category of artisan vegan cheese altogether, her cashew-based wheels are fermented with time-honored methods that put the flavors on par with the top cheesemakers across the globe. If the numerous awards don’t convince you, the taste will. This is the plant-based cheese for cheese-lovers, complete with black truffle, fig leaf-wrapped, and ash-encrusted options.

For more everyday sort of melting cheeses, there are also shredded, sliced, and blocks of oat-based cheese. The latest innovation is a liquid pizza cheese that’s ready to pour and bake. All of these and much more are available direct from the source online, or at most grocery stores, including Sprouts, Whole Foods, Target, and Walmart. 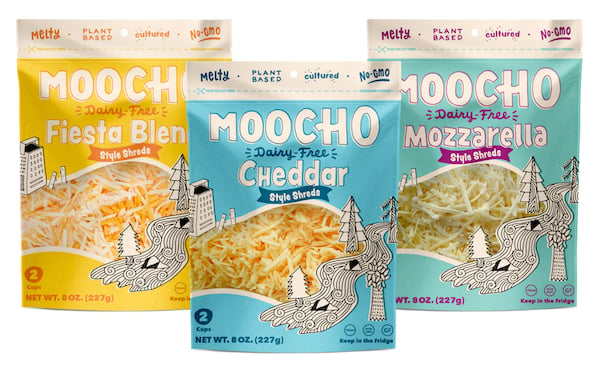 Moocho: Brought to you by the people behind Tofurky, Moocho is the upstart side project that focuses on dairy-free delights. Currently available primarily in the Midwest and Texas, particularly in H-E-B stores, they keep things simple.

You can find mozzarella, cheddar, and “fiesta” shreds, which is just a combination of the two. Stay tuned for spreads that will hit the market soon, as well as frozen cheesecakes and many other exciting treats! 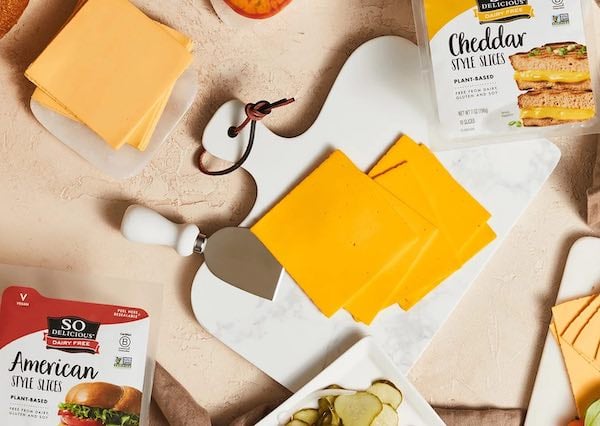 So Delicious: Once upon a time, So Delicious was known as Turtle Mountain, and they were one of the first mainstream brands to unleash vegan ice cream upon the world. While they do still proudly offer pints and frozen novelties in a wide range of flavors and different dairy-free bases, they’ve also expanded in the realm of coffee creamers, yogurts, and of course, cheeses.

Their shreds, slices, and spreads are all made with coconut oil and potato starch, so they’re safe for nearly any diet, regardless of allergies.

Treeline: Filling the void left by goat cheese, these soft, spreadable, and tangy blends have complex flavors but a simple ingredient list. Limited to cashews, herbs, spices, and probiotics, you’d be hard-pressed to find a more wholesome alternative to conventional dairy. These are perfect for gourmet cheese boards, eating with bread or crackers, or using as a dip. You can also find some aged options for a firmer yet still creamy texture.

More recently, the New York-based brand has expanded into the realm of slices and shreds, so now you can find those same high-quality ingredients as classic mozzarella, cheddar, and pepper jack. Rich and gooey, these are ideal for pizzas, nachos, grilled cheese sandwiches, and beyond.

Treeline is available in about 3,000 stores nationwide. Not all locations carry the full array of flavors, so order online if you want to fulfill a specific craving. 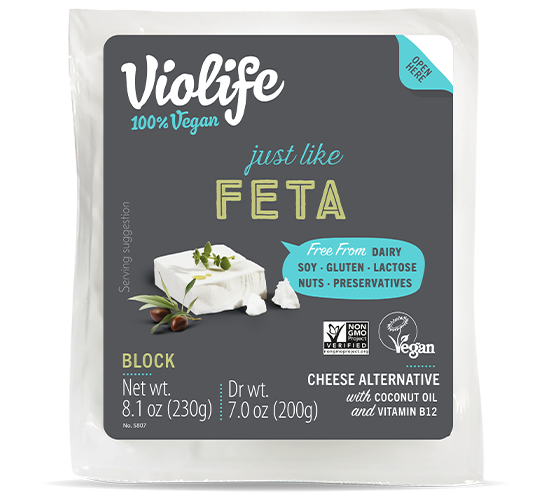 Violife: This Greek brand has taken the world by storm with its game-changing vegan cheeses that shred, melt, and taste just like those made with dairy. Heralded by some as “the pinnacle of vegan cheese,” you can expect all the everyday staples like mozzarella and cheddar done right.

What sets them apart from the pack, however, are their more specialized flavors, including Parmesan wedges that can be thinly shaved over hot pasta or cool Caesar salad, and briny feta that perfectly completes a full mezze plater.

It’s an even bigger hit in the UK, where Pizza Hut uses Violife’s shredded mozzarella to offer a vegan stuffed crust option to compassionate clientele. In the US, many smaller chains and independent restaurants have taken the hint too, making it more accessible than ever.

All the essential flavors are readily available at most grocery stores these days. Keep your eyes peeled for limited seasonal editions to celebrate summer and winter in the cheesiest way possible.> 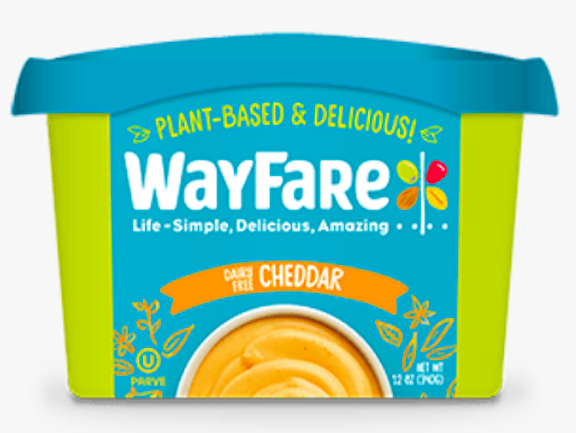 WayFare: Unless you’re lucky enough to live on the west coast, your chances of finding WayFare products at your local grocery store are slim to none. There’s still limited distribution for this burgeoning brand, which is sad considering what stunningly savory cheeses they have to offer.

Unlike other manufacturers, their focus is on spreadable, tub-based options that are ideal for turning into a sauce. The Cheddar with Jalapeños was made to be drizzled over nachos or wrapped up in burritos. Meanwhile, the plain Cheddar makes the best instant mac and cheese sauce the world has ever seen.

WayFare uses a unique base of fava beans, oats, and coconut oil for their gooey goodies. This includes cream cheese, sour cream, butter, and even ready-to-eat pudding! It’s worth placing a special order through their website to get a taste.