Eggs are an important ingredient in baking and cooking due to their distinctive leavening and binding properties. But if you no longer use them, there are plenty of vegan egg substitutes on the market and in your kitchen. This guide details the most popular brands of vegan egg alternatives as well as common kitchen staples, and the best uses for each one. 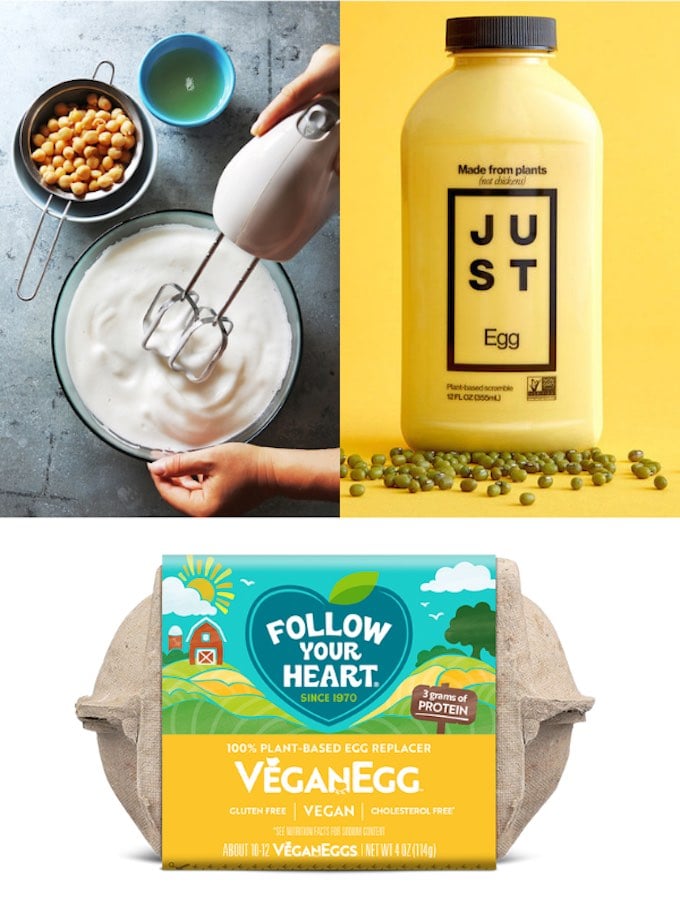 If you want to make vegan egg dishes, there are some great options for egg alternatives on the market. You can use these products to make dishes such as omelets, French toast, quiches, and more. Whether you are egg-free by choice (vegans don’t use eggs) or necessity (allergies or other health-related issues), here are a few good reasons to ditch them:

Lower cholesterol & improve heart health: Egg yolks are loaded with cholesterol, which can increase the risks of cardiovascular disease and other serious health issues such as diabetes and high blood pressure.

According to the Physicians Committee for Responsible Medicine (PCRM), “the fat and cholesterol found in eggs can harm heart health and lead to prostate cancer, colorectal cancer” and more.

Lower chance of food-borne illness: According to the FDA, eggs “may contain a bacteria called Salmonella that can cause…food poisoning” and other health problems.

Not only do these facilities blow greenhouse gases into the air and atmosphere, but they also can contaminate streams, rivers, and soil if bacteria and toxins from the manure seep into the ground.

An essential breakfast and baking staple, eggs are a common ingredient found in many dishes. Fortunately, there are several vegan egg alternatives on the market, allowing you to easily recreate the flavors you love. Plus, there is also a slew of staples you may already have in your kitchen that can be swapped in for eggs for baked goods or making scrambles.

Here are some store-bought vegan egg alternatives that will make your eggless baking and cooking easier: 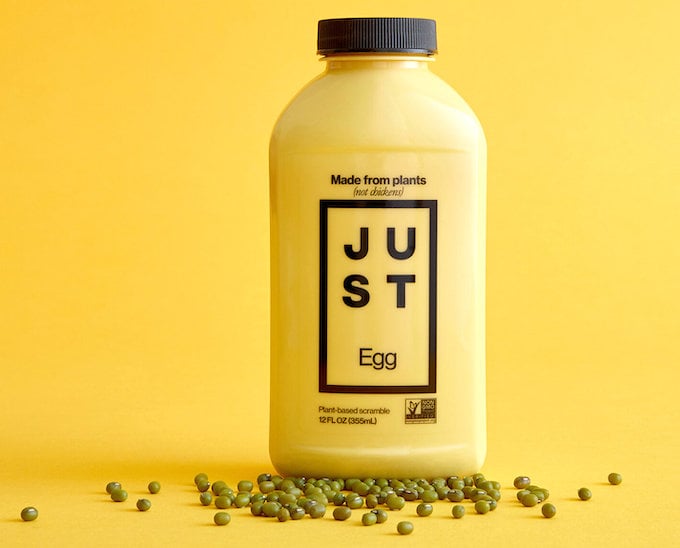 JustEgg: According to JUST, Inc. “JustEgg” is entirely free from cholesterol. This vegan egg alternative is made from plants and is packed with clean, sustainable protein. The key ingredient is mung bean: a protein-rich legume that scrambles and tastes very much like an egg. 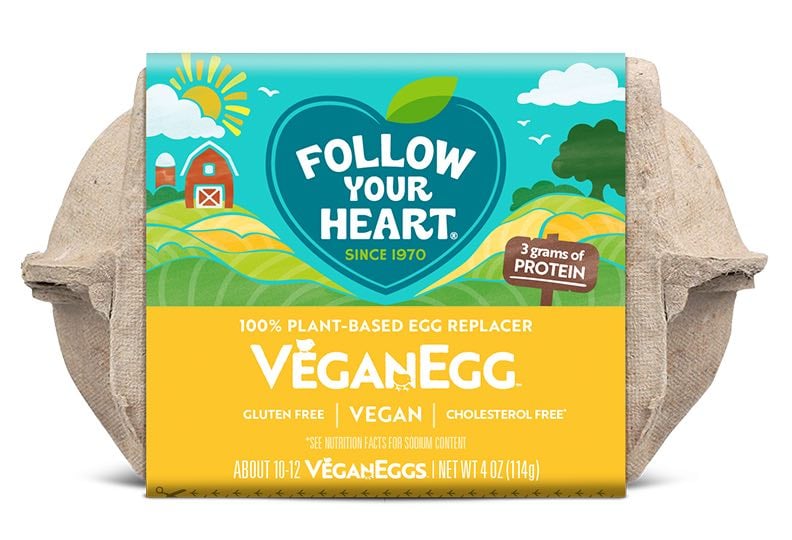 Follow Your Heart’s VeganEgg: Follow Your Heart’s “VeganEgg” is another excellent vegan egg alternative. This soymilk powder-based substitute is seasoned black salt, which is a Himalayan rock salt with a sulfur-like flavor that gives products a taste similar to that of real eggs. 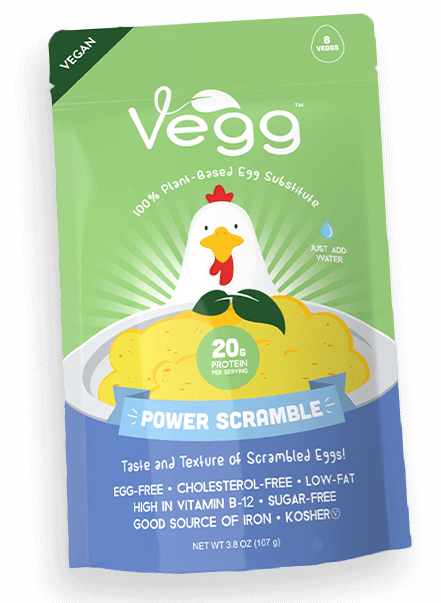 The Vegg Scramble: The Vegg Scramble is the first mass-produced vegan egg yolk product on the market. Designed to be scrambled and eaten just like a breakfast scramble, this plant-based egg alternative is also made using black salt and soy protein to give it the flavor of a real egg. The best part? Each serving provides 20 grams of protein. 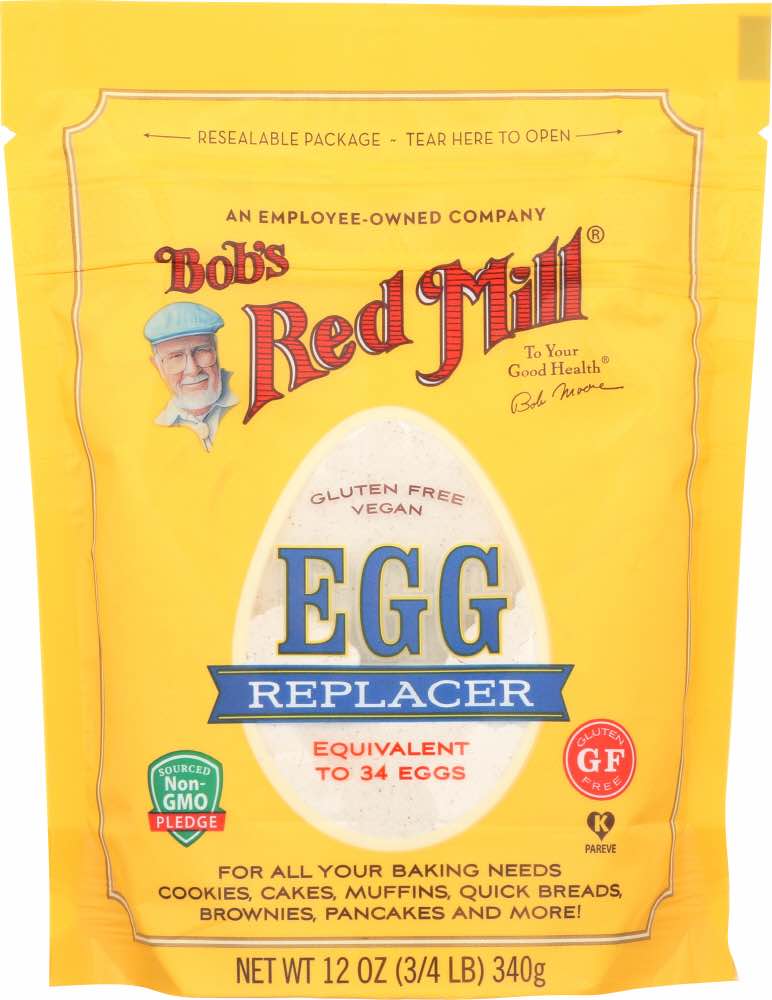 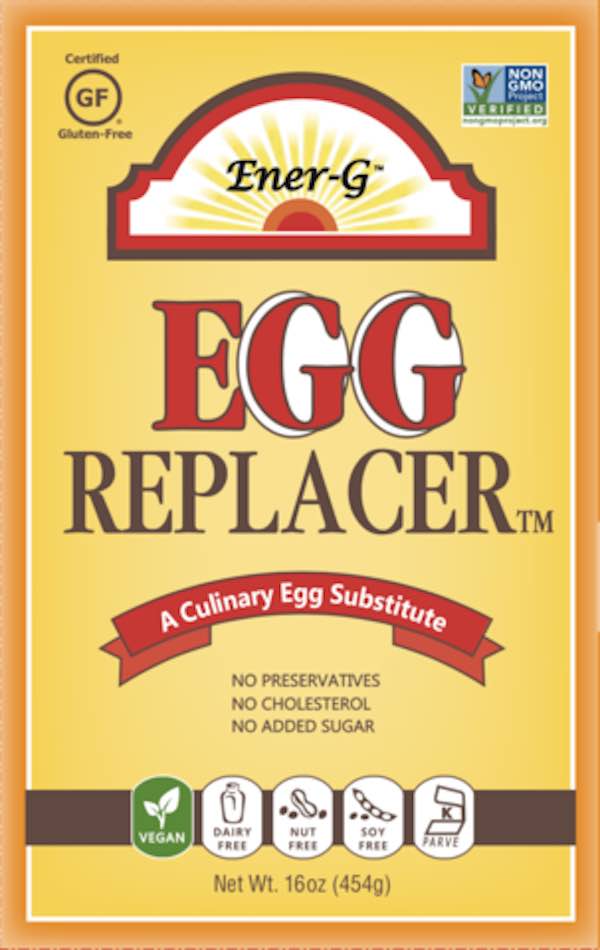 Ener-G Egg Replacer: Another long-standing vegan egg alternative, Ener-G Egg Replacer is gluten-free, dairy-free, and soy-free. Since this vegan egg substitute contains some leavening agents, it’s been found to work best for baking in things like cakes and cookies. 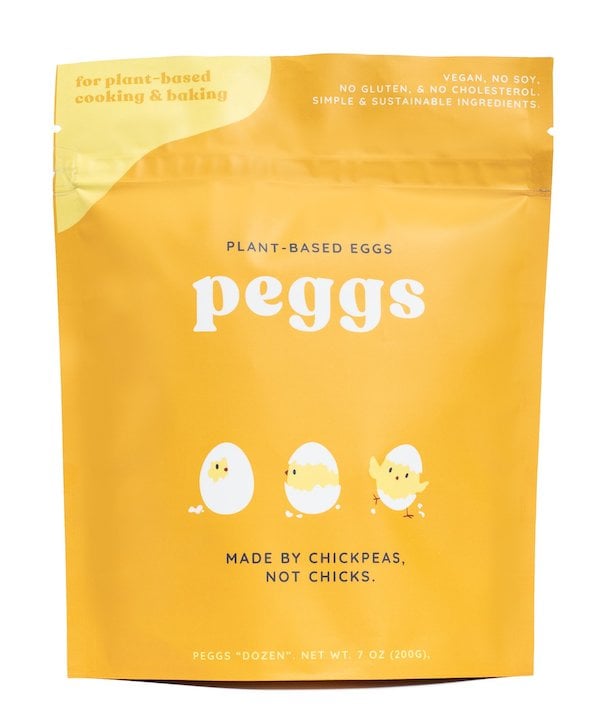 Pegg’s Plant-Based Eggs: This new vegan egg alternative was born during the pandemic and is on a mission to make food more wholesome and sustainable. That’s why it is made using chickpeas for cooking and baking. Ground chickpea flour and other emulsifiers give this vegan alternative its “eggy” texture and flavor, it tastes so much like the real thing. 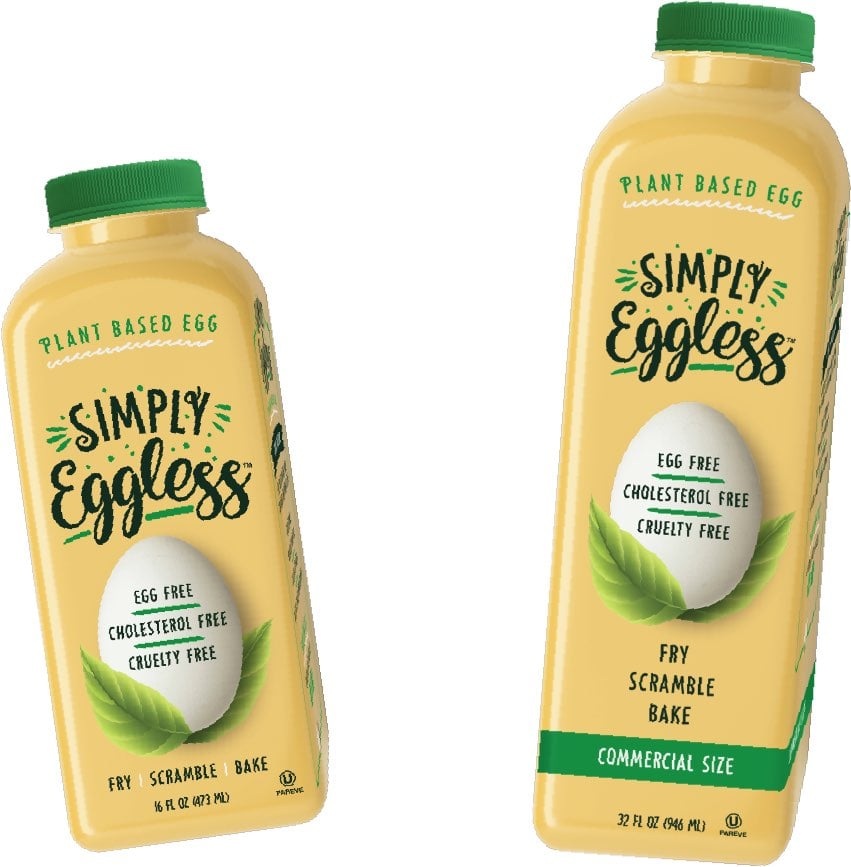 Believe it or not, you probably already have plenty of vegan egg alternatives on hand right in your kitchen. Innovative chefs and bakers have long used other ingredients in their kitchens to replace eggs. The trick to deciding which substitute to use is whether the egg in the recipe was intended to be a binder or leavening.

Applesauce: This egg substitute is an ideal fat-free alternative for baking in recipes where there is already a leavening agent at work. Intended more for binding and adding moisture, unsweetened plain applesauce works best in things like cakes, breads, muffins, and other baked goods. Use ¼ cup of unsweetened applesauce to replace one egg. 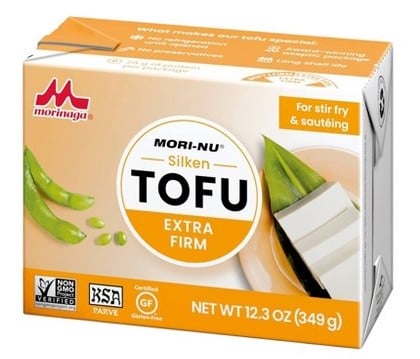 Tofu: A good source of protein and very close to the real thing, tofu can often be a surprising alternative in terms of texture and flavor. For scrambles, firm or extra-firm silken tofu are perfect, but you can also use regular tub tofu (firm rather than extra-firm is best), well-drained. Season with favorite spices or herbs, and add veggies to replicate those breakfast dishes you remember. Here are Vegetable Tofu Scrambles with Lots of Variations.

Pureed silken tofu is also great in recipes that already have a leavening agent and is often used for binding or adding moisture to dense goods such as cakes and brownies.

Avocado: Avocados are another great vegan egg alternative when the egg acts as a binding agent in the recipe. They are great for adding moisture to brownies and other baked goods, just make sure to mash them up well until they are creamy and smooth. One egg is equal to roughly ¼ cup of avocado. 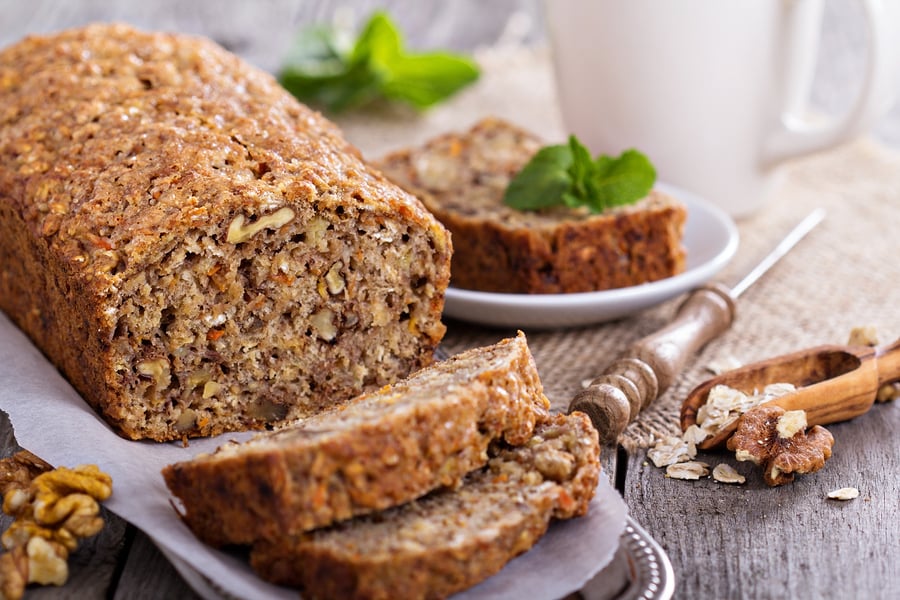 Ripe Banana: Bananas are also excellent vegan egg substitutes. They add moisture to dense products such as cakes, pancakes, and brownies while also imparting some of their sweetness. Using mashed banana, try making this easy vegan banana bread with those very ripe bananas sitting on the counter. To replace one egg, use one medium ripe banana, well mashed.

Vegan yogurt: Vegan yogurt (soy, coconut, almond, and others) is another great vegan egg alternative for many baked goods and pancakes. This ingredient works best when there is another leavening agent present in the recipe. For binding and adding moisture, you need about ¼ cup of vegan yogurt to substitute for one egg. 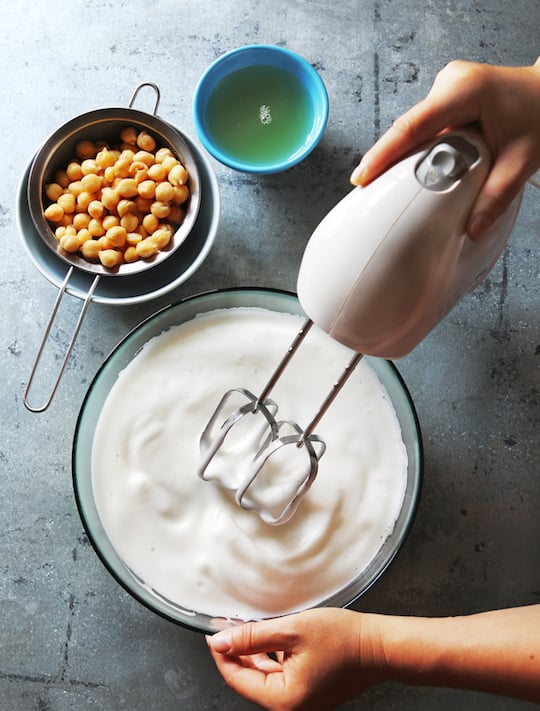 Aquafaba: Aquafaba may not sound very appetizing, but it is possibly the most amazing of all the vegan egg substitutes. Aquafaba acts as a binding agent and is excellent in cookies and other baked goods. It’s simply the liquid that comes from canned beans, with chickpeas being the most commonly and successfully used. To use aquafaba as an egg replacement in vegan recipes, use about three tablespoons of liquid to equal one egg.

Amazingly, aquafaba whips up just like egg whites to be used as meringue or in soufflés. Here is A Guide on How to Make Aquafaba, and a recipe for these quick and easy 4-Ingredient Vegan Meringues. 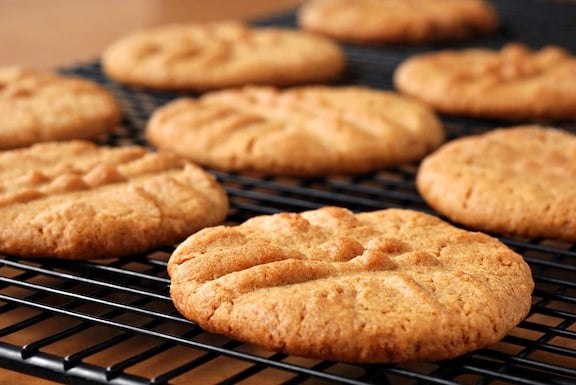 Now that you know how to replace eggs in recipes with other vegan alternatives, you can experiment to see which alternatives give you the flavor and consistency you desire in your baking and cooking. 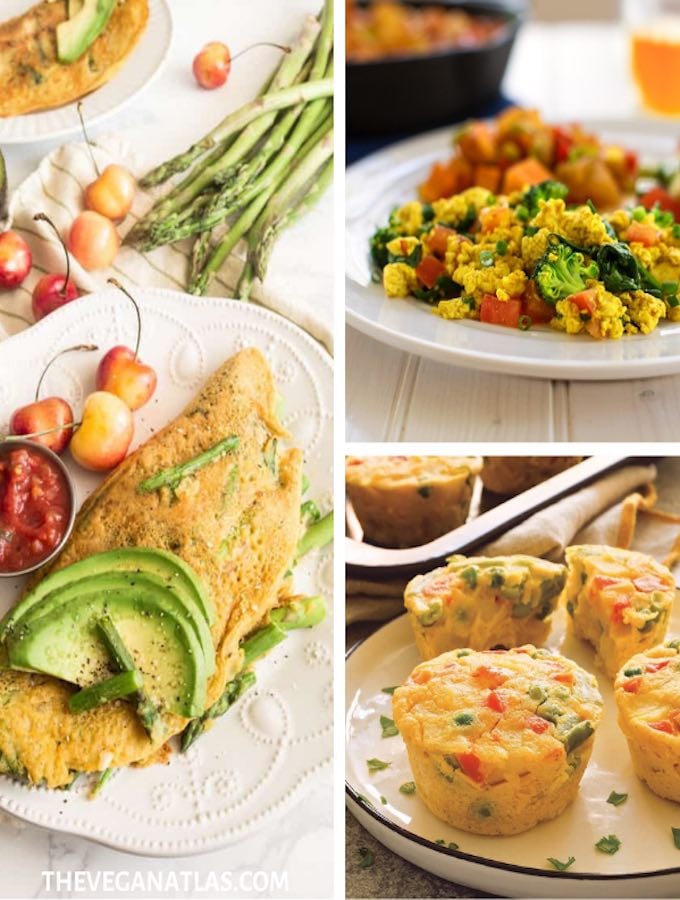 Make sure to see the recipe roundup, 37 Eggless Vegan Egg Dishes for more recipes and ideas for cooking and baking with vegan egg alternatives.

Contributed by Anna Fiore: Anna is a 2021 graduate of SUNY-New Paltz, majoring in Communications, with a concentration in Public Relations and a minor in journalism. She is an advocate of environmental sustainability and clean eating.