To call sriracha a hot sauce would be accurate, but that’s a bit of disservice to what has become a beloved kitchen staple. What is sriracha and why is it so crave-worthy? It’s certainly spicy, but not too hot to handle. This guide to sriracha may inspire you to keep a bottle on hand at all times! 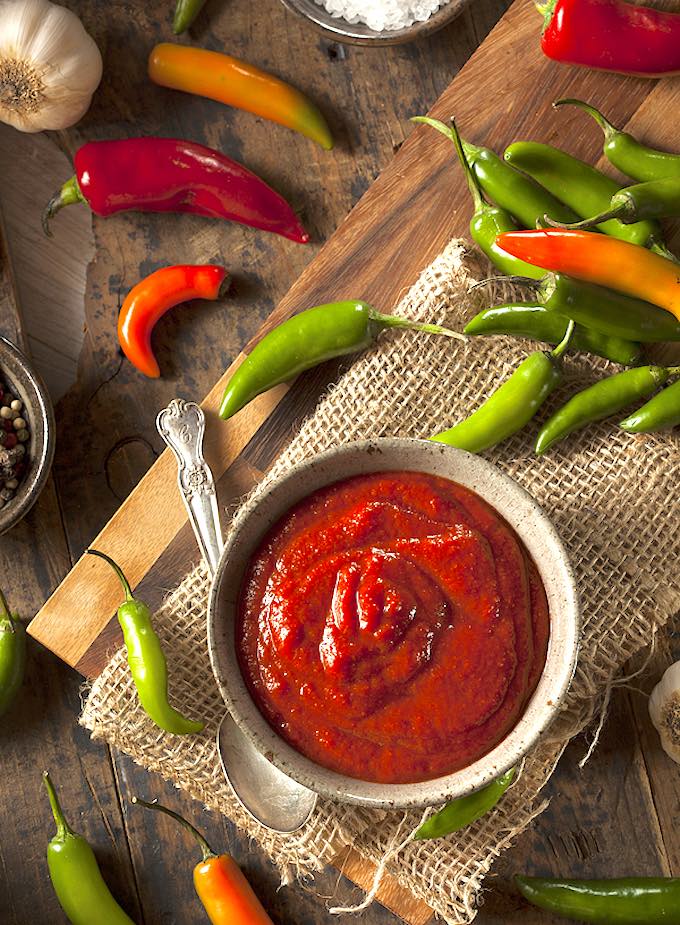 Few foods have inspired a cult following quite like sriracha. What was once an exotic import, elusive and largely unknown a mere twenty years ago is now a ubiquitous staple worldwide.

Walk into any grocery store and you’ll likely find a tidy line of those iconic red bottles with green or yellow caps. Some are emblazoned with the white printed rooster for which they were once known. That’s the reason it has come to be known as “rooster sauce.”

Crossing culinary boundaries to spice up everything from Vietnamese pho to nachos, the impact of sriracha in popular culture goes way beyond a mere condiment. Devotes even use it to dress up desserts, like vanilla ice cream or peanut brittle, for a surprisingly spicy finish.

In college dorms where pickings are slim, sriracha is there to make anything palatable. A drizzle perks up a bland meal and breathes new life into tired leftovers.

What is sriracha and where did it come from?

Though frequently associated with steaming bowls of Vietnamese noodles, sriracha was originally a Thai invention. Si Racha, a tiny seaside village, is where it all started roughly 100 years ago. It was developed as a sauce that could pair with all foods, combining notes of salty, sour, sweet, spicy, and salty all in one.

To achieve this balance of flavors, garlic, chilies, sugar, vinegar, and salt are lightly fermented before blending to a smooth consistency, slightly thinner than ketchup.

Compared with many other hot sauces, sriracha is relatively mild, which makes it a great gateway into spicy foods for the hesitant. It adds comforting warmth, a little kick where needed, without overwhelming the senses.

This is what makes it great for desserts, in the same way that salt helps to amplify sweetness; it may sound crazy, but there really is wisdom to the concept that opposites attract. 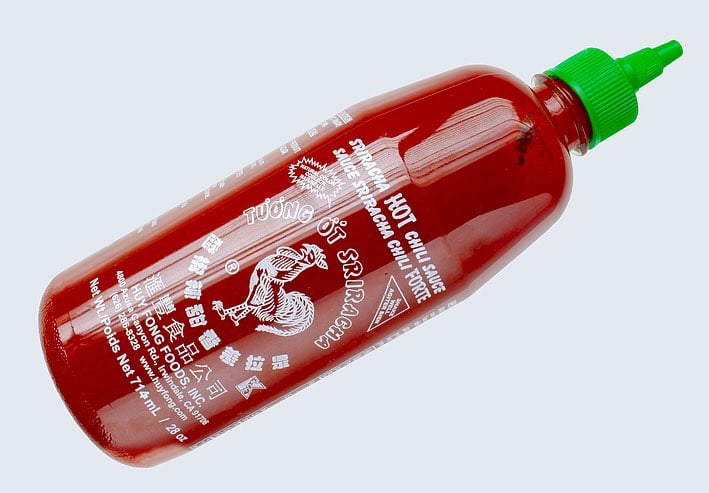 Huy Fong Foods Sriracha Hot Chili Sauce, with the familiar rooster logo, might be the most prominent of today’s brands, but it’s far from the only one.

Most brands of sriracha are vegan. The ingredients and proportions vary between brands, but few actually include animal products in the sauce.

One source of confusion is due to the major brand, Huy Fong Foods, not being able to specify the type of sugar used in it. Non-organic sugar is sometimes refined with bone char, an animal product. There’s no actual animal product in the sauce, but due to this technicality, it isn’t considered 100% vegan.

Some specialty brands might include fish sauce, honey, or as in a Trader Joe’s variety, Worcestershire sauce. So read labels carefully. Here are a few brands considered completely vegan, according to this article in Treehugger: 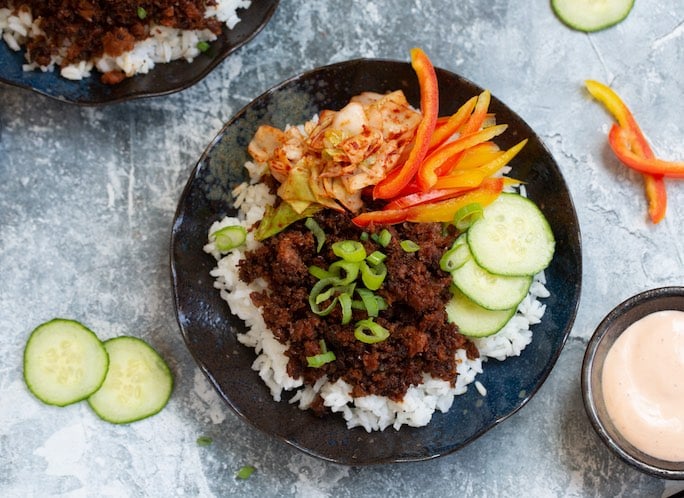 Mix up some vegan srircacha mayonnaise!

Bottled sriracha mayo usually uses conventional egg-based mayonnaise, and so it’s definitely not vegan. It’s a snap to simply mix vegan mayo and sriracha together make a creamy dynamite sauce at home instead.

We suggest starting with ½ cup and stirring in 2 teaspoons of sriracha. Stir in 1 teaspoon more at a time until you get the spicy effect you’d like.

Vegan Korean Beef-less Bowl, shown above, is even better served with a quick homemade sriracha mayo.

How to buy and store sriracha

Huy Fong Foods is the most recognizable, widespread brand in the U.S., known for its rooster emblazoned on the bottles. Other competitors are chipping away at that monopoly though, coming up with organic, sugar-free, low-sodium, or spicier options to accommodate increasingly discerning buyers.

Sriracha is generally available in well-stocked supermarkets and natural foods stores. You might even find it in gas station groceries and dollar stores! Better prices will always be found at Asian specialty stores. Once a bottle is opened, it’s best to keep refrigerated, where it essentially never spoils.

Is there a sriracha shortage?

There are reports of shortages, but they’re largely overstated. Rumors of sriracha shortages crop up regularly, sending fans into a frenzy to stockpile. There’s a kernel of truth in those headlines, as poor chili crops in recent years have strained production of sriracha and other hot sauces.

Luckily, there’s more than one sriracha on the shelf, pulling peppers from many different sources. You may need to branch out into different brands, but there will nearly always be some sriracha, ready to accommodate all your fiery cravings.

The nutritional impact of sriracha is negligible since it’s only consumed in small quantities. It won’t fulfill any of your recommended daily allowances, but it’s notably high in Vitamin C. One teaspoon has roughly 5 to 6 calories, no fat, and 1 gram of sugar. It’s naturally free of all common allergens.

Some studies show health benefits from capsaicin in chili peppers. There’s growing evidence that it can help speed up the metabolism, act as an anti-cancer agent, and fight inflammation. However, given the amount you’d need to see real effects, you’re still better off taking your supplements and enjoying your hot sauce recreationally, rather than medicinally. 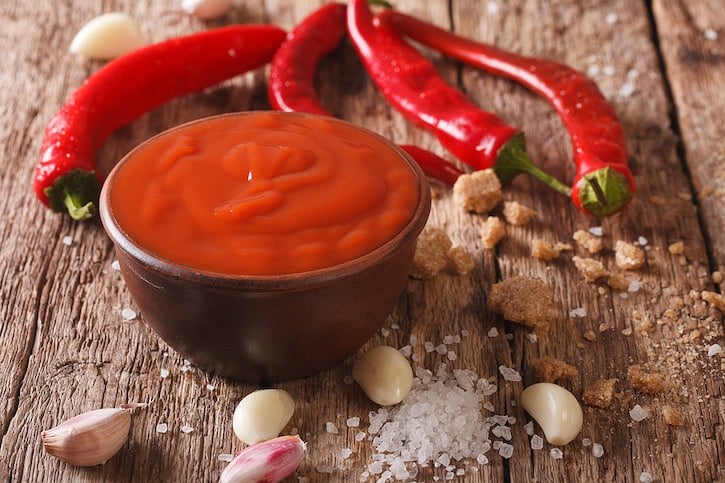 Great ways to use sriracha

Like most hot sauces, sriracha goes with pretty much any food and is an excellent addition whenever you’re craving an extra touch of heat. The convenient squeeze bottle was designed to sit on the table alongside any other condiments for diners to help themselves, adding the brilliant red sauce to taste.

If you’d like to take a DIY approach, you can even make sriracha from scratch, allowing you to control the quality and quantity of each component.

A few popular ways to use sriracha that need no recipes (or a very simple one) include the following. Simply drizzle over your food or swirl in and enjoy!

Here are a few suggestions for more creative approaches, with links to recipes: 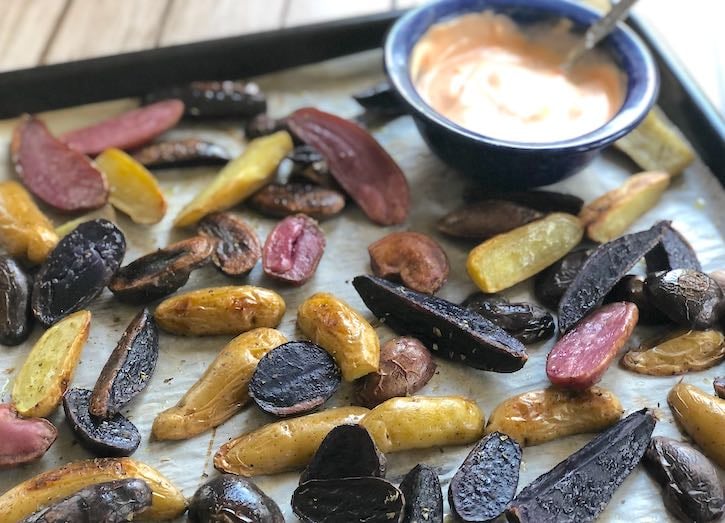 Roasted potatoes or other vegetables with sriracha mayo:  If it’s possible to make this sauce even more addictive, Roasted Fingerling Fries with Sriracha Mayonnaise is so very crave-worthy. It shines when paired with simple foods like roasted vegetables.

Spice up your sushi and plant proteins: Sriracha also does wonders when used to top sushi, mixed into plant-based “tuna” or “chicken” salad, and used as a sauce with other plant protein dishes. 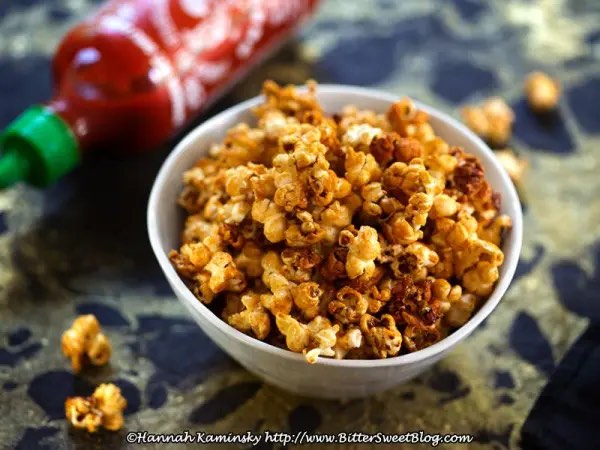 Pepped-up Popcorn: Kettle corn is known for combining sweet and salty flavors for an irresistible snack, so when you go one step further to make Sriracha Kettle Corn, you have an irresistible treat on your hands. Fluffy kernels stay crisp thanks to the lightly candied coating that won’t make your popcorn soggy as it sits.

Buffalo Sauce: Although classic buffalo sauce calls for American-made Frank’s Red Hot, sriracha is an ideal adaptation. Vegan Buffalo Sriracha Chicken Wraps use soy curls to make a grab-and-go meal that sparkles with bold flavor. You can use this sauce to drench any of your favorite wing alternatives as well, from cauliflower to plant-based nuggets. 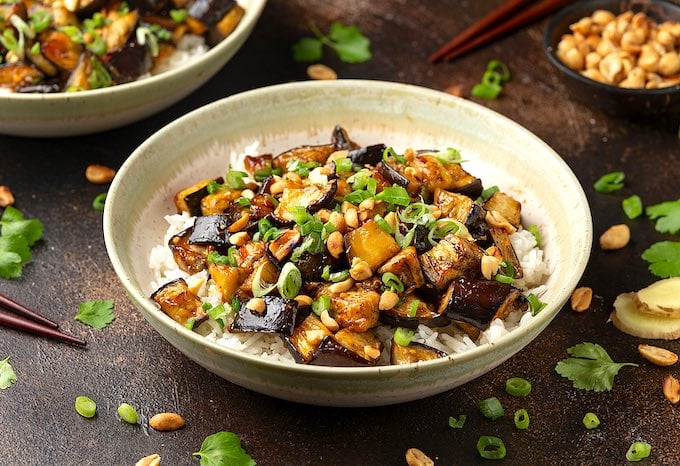 Vegetable Stir Fries: Any fresh produce combination will pair beautifully with the universal seasoning that is sriracha, but Asian-Style Garlicky and Spicy Eggplant is one of the best. Inspired by the Chinese staple, it’s an excellent stand-alone side dish or main course with the addition of cubed tofu.

Mac and cheese with a kick: Elevate the standard mac well beyond kid’s meals with a cheese sauce that has a spicy kick! Vegan Sriracha Mac & Cheese employs cauliflower to make a stunningly creamy, dairy-free cheese sauce that practically glows with a spicy bite.

A bold pot of chili: The best bubbling pots of chili use a variety of different chilies to achieve a balanced, nuanced heat, so it stands to reason that sriracha would be a brilliant addition. Easy Vegan Chili with Sriracha makes a hearty meal sure to keep you warm and content through the coldest days.