In recent decades, fresh ginger, a knobby root (or more accurately, rhizome), has made its way from being a specialty item in Asian groceries to becoming a fixture in supermarket produce sections. This guide to fresh ginger explores how to make the most of it in the home kitchen, with tips and links to recipes that highlight it. 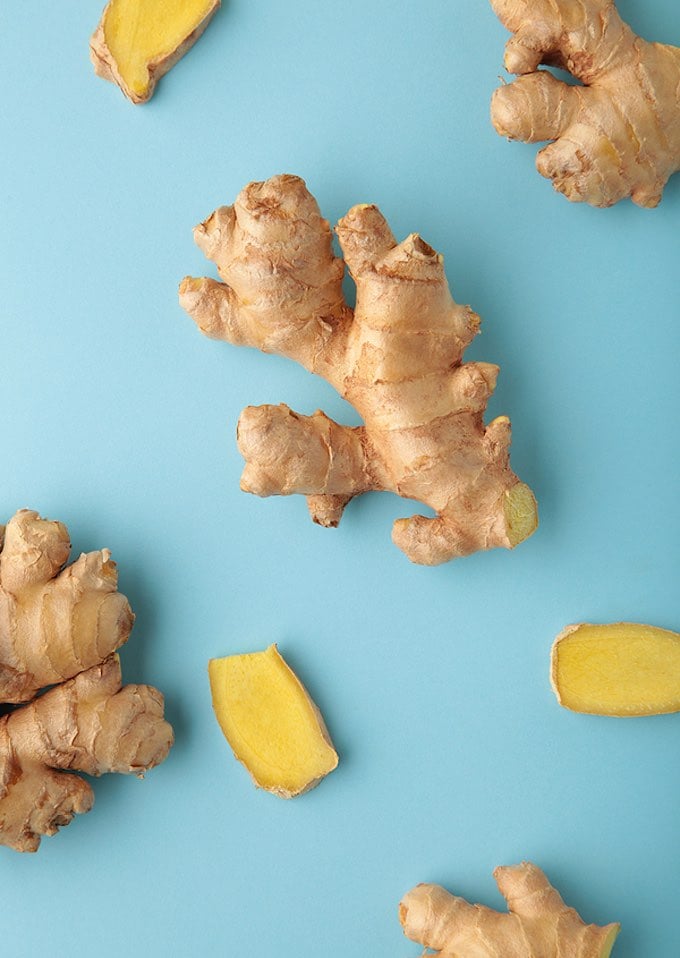 The bracing, spicy-sweet flavor and aroma of ginger are essential to many Asian cuisines, and it’s one of the most characteristic flavorings in many Indian dishes.

In its powdered spice form ginger is used in baked goods, but aficionados agree that dried ginger shouldn’t be used when fresh is called for, especially in savory dishes.

A bit of background on ginger

Ginger is the rhizome of Zingiber officinale. It has been esteemed since ancient times not only for its remarkable flavor but also for its medicinal qualities. It has long been used in Asian and European cultures for its ability to settle the stomach and relieve nausea caused by motion sickness and pregnancy.

As mentioned above, ginger is used extensively in many Asian cuisines, particularly Chinese, Japanese, and Indian. It is also favored in West African dishes, where one specialty is the bracing beverage called ginger beer. The warm, spicy flavor of ginger also enhances sauces and dressings in a unique way. 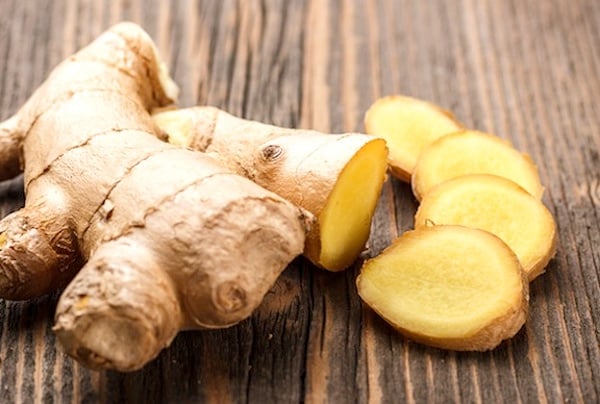 When buying fresh ginger root, it should feel quite firm, and the tan skin should look fairly smooth and taut. Avoid ginger that feels light or has wrinkly skin. It’s best to buy a small amount at a time, say, a section that fits into your palm.

Store the ginger root in a plastic bag in the crisper of your refrigerator. If you don’t anticipate using it up within a week (or two at the most), wrap it up in a paper towel to absorb moisture before placing in a plastic bag.

How to freeze fresh ginger

If you’ve bought more ginger than you can use within a reasonable time, wrap it in paper towel and place it in a snug, airtight container. Pop it in the freezer, where it will last for about 3 months. Thaw it out on the counter or in the refrigerator before using. That’s all there is to it!

One unpredictable factor in buying fresh ginger is whether it will be stringy inside. A root that was harvested when more mature will have more stringy fibers, making it more difficult to use, especially when grating is called for.

Of course, any cook would prefer ginger root that isn’t fibrous, but that’s often hard to know, as you can’t see inside. One clue would be to look at any slightly open ends, as the roots that are sold are often broken off from a larger section. Do they look shriveled and fibrous? The rest of the root might be, as well.

If you’re stuck with a stringy root, opt for mincing it with a sharp knife rather than grating it, to minimize the problem.

Another alternative for ginger that’s stringy or nearing the end of its freshness is to cut into thin slices for using in recipes where simmering is called for, such as in soups, sauces, and curries. Remove and discard the slices before serving.

When ginger is at its best, that is, moist and not stringy, adding it to a recipe grated is desirable, since its flavor will permeate the dish it’s added to readily. Use a very fine grater. There’s even a special Japanese grater made especially for this purpose.

Ginger is often peeled before using, mostly as a matter of aesthetics, but if the skin is smooth, you can leave it on. 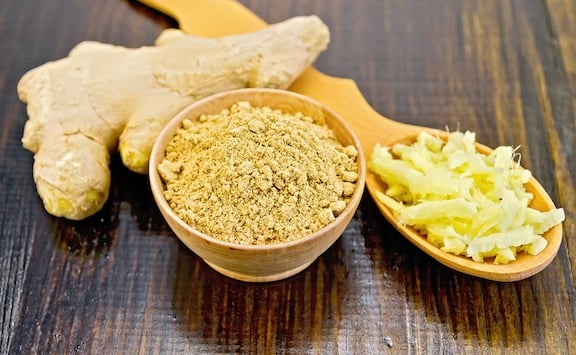 A word about ground ginger

Since this article is focused on fresh ginger, let’s just say a few words about its dried (sometimes called ground) spice derivative. This spicy-sweet, fragrant spice is most commonly used in baked goods.

Gingerbread comes to mind immediately as a common use; ground ginger is also a standard spice for pumpkin and squash pies. It’s also a pleasing enhancement for apple and pear desserts.

What about squeeze-bottle ginger?

In recent years, fresh ginger that can be squeezed from a small bottle has become widely available. It need not be refrigerated until opened and is often found shelved in or near the produce section of well-stocked supermarkets.

Purists may disagree, but I say a resounding “yes!” to squeeze-bottle ginger. It makes it so convenient to use, you don’t have to fuss with mincing or worry about stringiness. I find that having a bottle in the fridge at all times inspires me to use it much more often.

Ginger is rich in antioxidants, but it doesn’t provide a notable amount of vitamins or minerals. However, it has long been associated with other benefits. As mentioned earlier, it’s especially noted for its ability to settle the stomach and relieve nausea, gas, and bloating.

Ginger has also been used in many cultures as an aid to digestion and as an appetite restorative. Here’s more about ginger’s benefits: 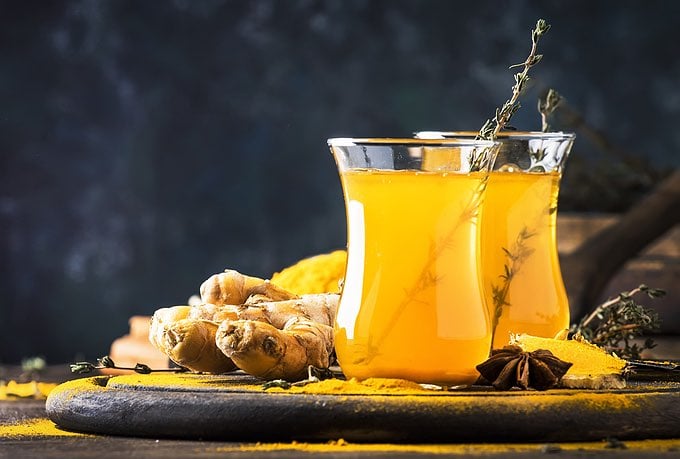 Fresh Ginger and Turmeric Tea: The classic fresh ginger and turmeric tea is bolstered by lemon and apple cider vinegar to make a bracing tonic. This is good served hot or cold. 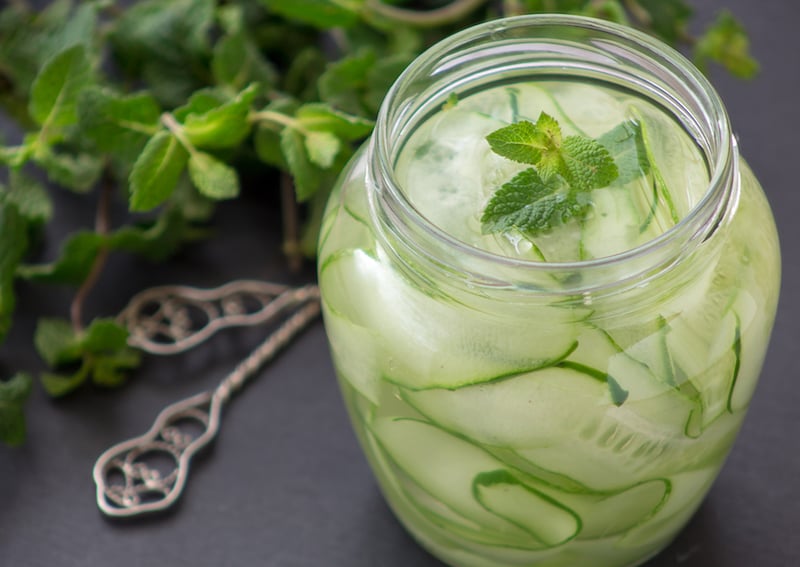 Cucumber-Ginger Lemonade: If you’re regretting a food blow-out (aka holiday meals), or just want to feel refreshed and hydrated on warm-weather days, this gingery lemonade is for you! 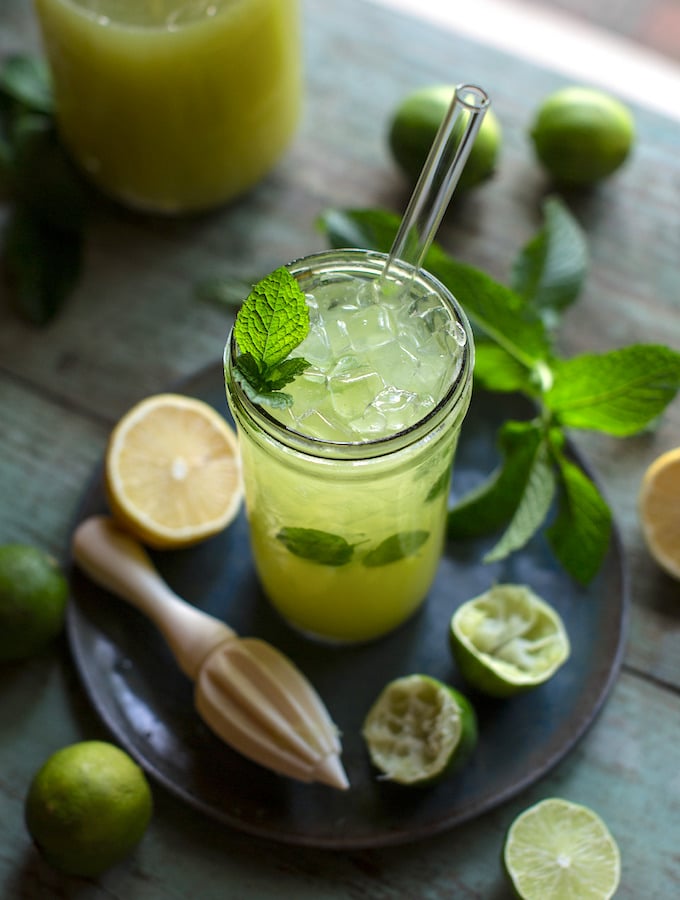 Ginger-Mint Limeade: This incredibly refreshing, gingery limeade is a creation by Timothy Pakron, AKA Mississippi Vegan. 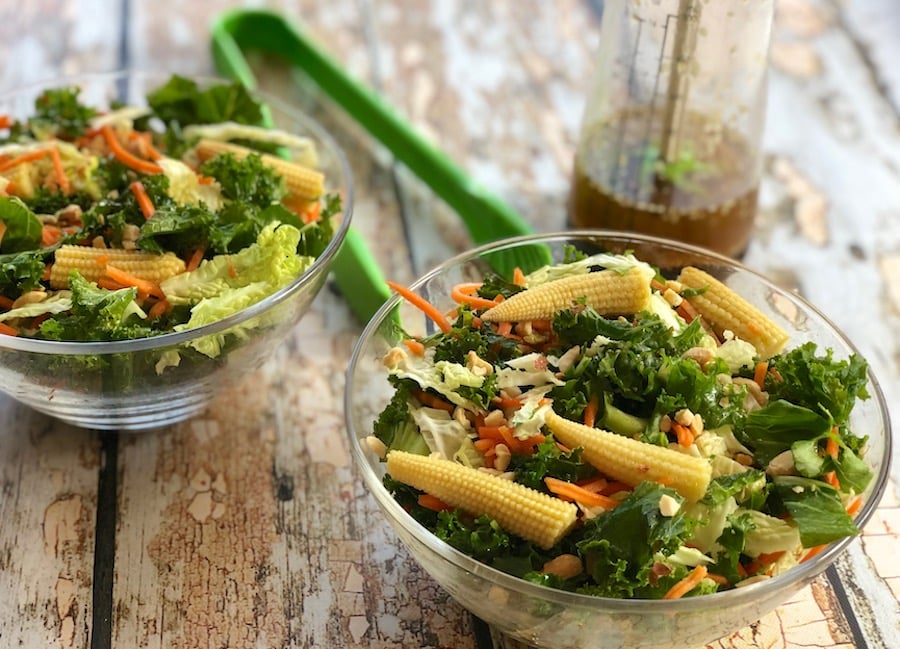 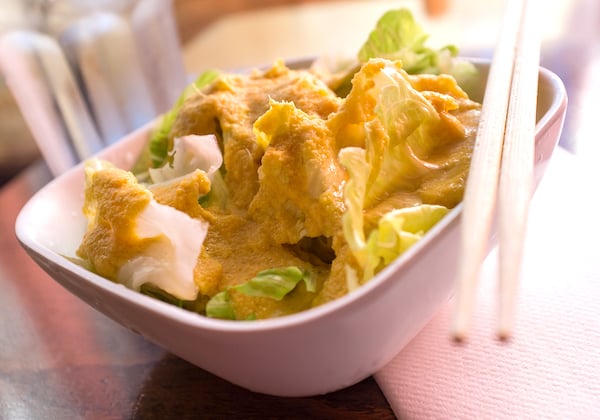 Japanese-Style Carrot-Ginger Dressing: Here’s an easy recipe for carrot-ginger dressing — just like the kind you enjoy on salads in Japanese restaurants. A simple leafy salad is a good accompaniment to Asian-style meals. 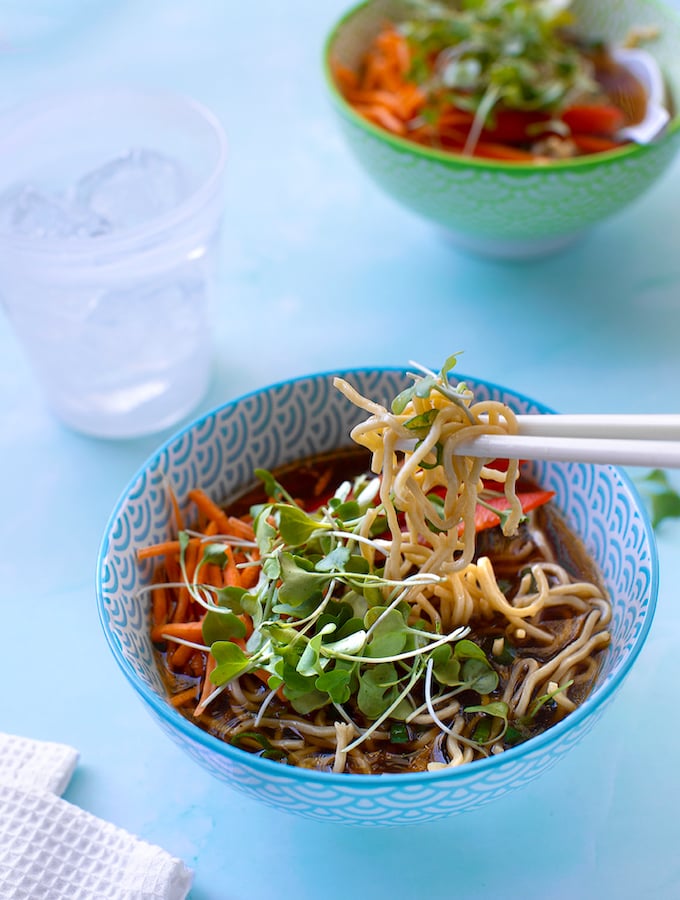 Quick Ginger-Miso Noodle Soup: In this Japanese-inspired soup, noodles are cooked in broth and are topped with crisp raw vegetables, making for a fun and offbeat presentation. 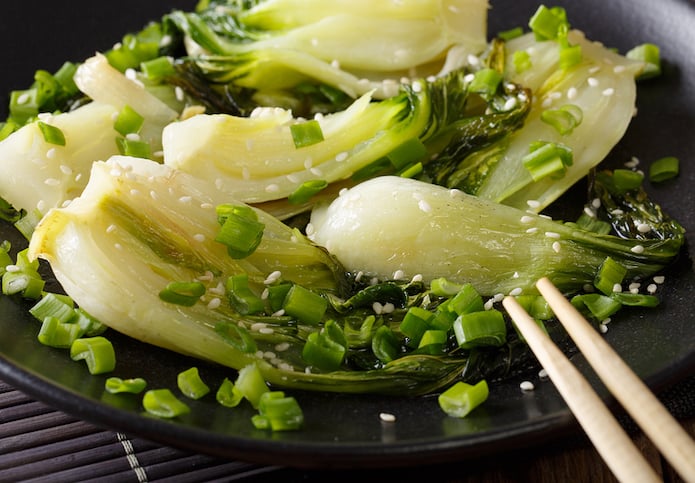 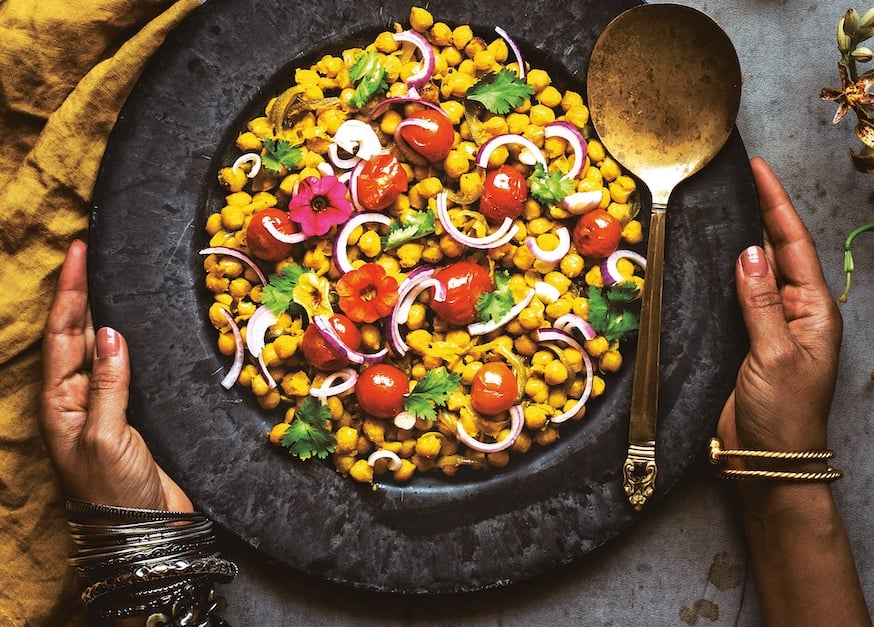 Ginger Turmeric Chickpeas with Roasted Cherry Tomatoes: This simple dish by Rakhee Yadav comes together for a delicious quick meal. 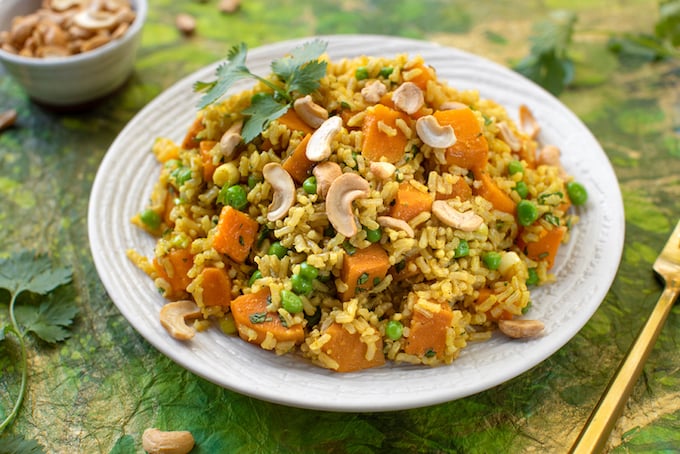 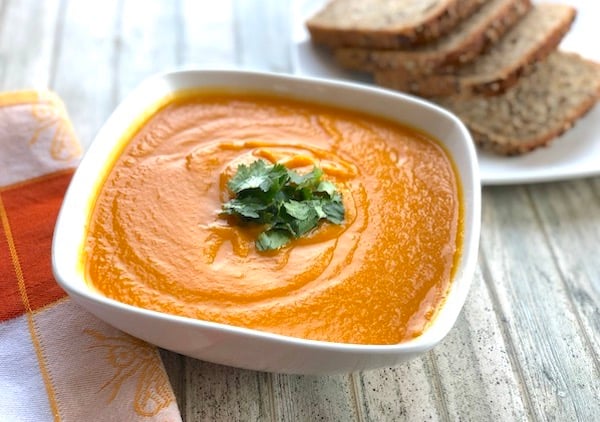 Carrot-Ginger Soup (with a parsnip variation): Classic carrot-ginger soup is made easier by using baby carrots, eliminating the need for a lot of peeling and chopping. 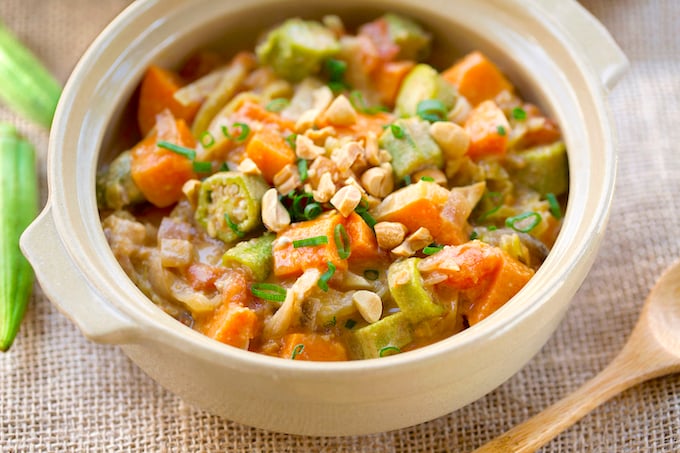 African-Inspired Peanut Stew with Sweet Potatoes and Okra: A delectable sweet potato and okra stew in a rich, gingery peanut butter base, this is a simplified version of a typical West African recipe. 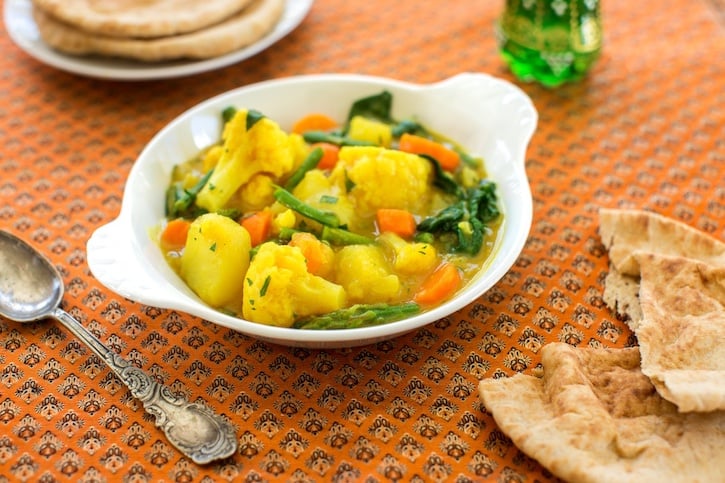 Coconut Curry Vegetable Stew: The vegetables in this curry are typical to Indian curries, and the whole dish is simplified with a fantastic shortcut — readymade Indian simmer sauce— and of course, lots of ginger. 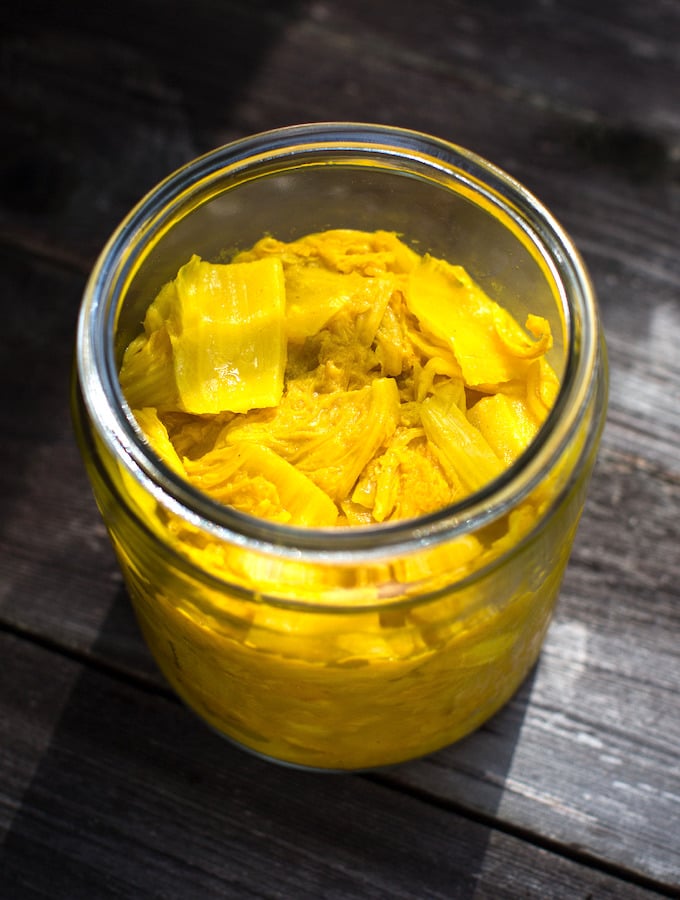 Sunshine Napa Cabbage Kimchi: This vibrant, turmeric and ginger-infused napa cabbage kimchi (excerpted from Mississippi Vegan by Timothy Pakron) is crunchy, zesty, and tangy — the perfect addition to salads, sandwiches, and wraps. It can also be tossed into fried rice or a vegetable stir-fry. 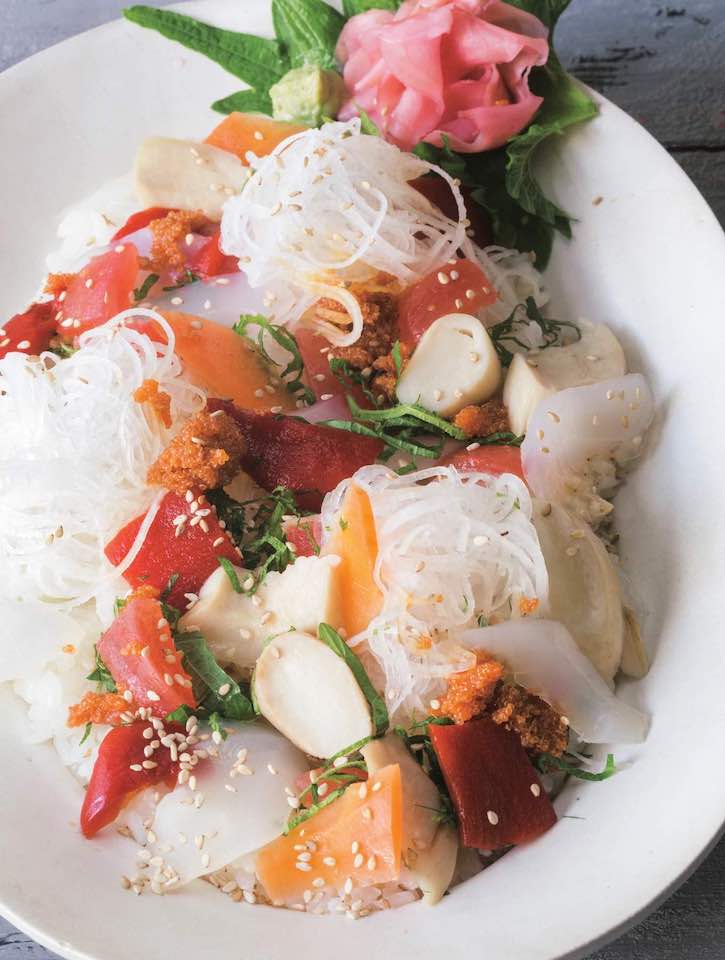 Previous Post: « Roasted Zucchini and Summer Squash
Next Post: A Guide to Carob — how to buy, use, and enjoy »