Carob, touted as a chocolate alternative, has gotten a bad rap over the years — perhaps understandably, since there’s no reason whatever to replace chocolate. Carob is its own thing entirely. This guide to carob has all you need to know about buying, using, and enjoying it. 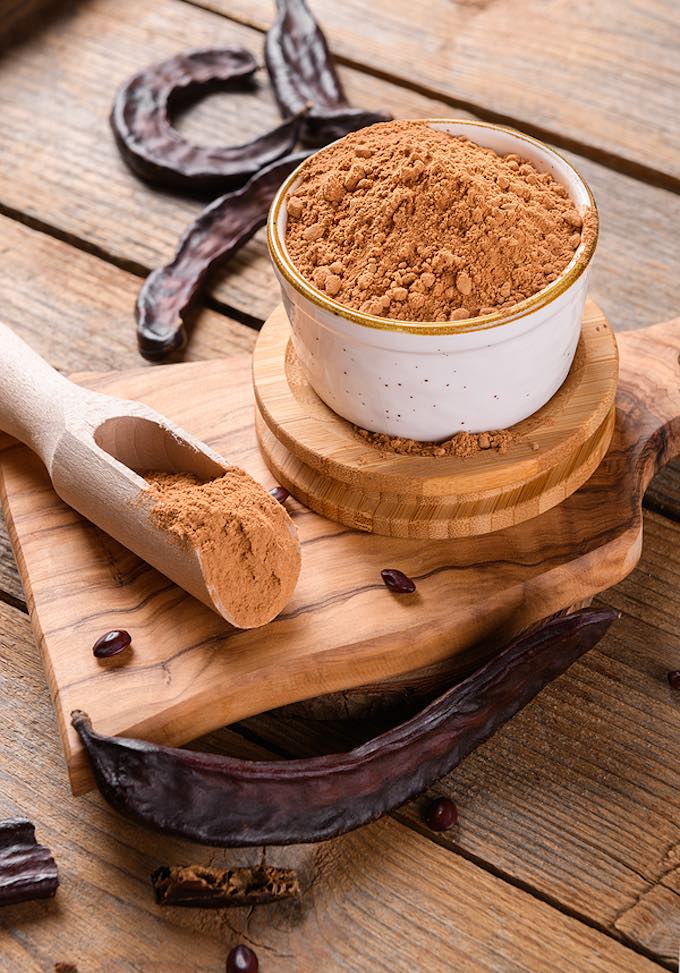 Strongly associated with the health foods movement of the 1970s, carob powder has commonly been used as a substitute for cocoa powder due to its similarity in color, texture, and cooking properties.

If only such a lofty comparison wasn’t sold to boost its profile, it might have had a fighting chance as its own uniquely flavorful and distinctive ingredient.

What is carob and where did it come from?

Carob trees first grew in Israeli and ancient Egypt thousands of years ago, even taking root in the oldest known piece of literature, “The Epic of Gilgamesh.” Critically important as a food source and form of currency, they were truly worth their weight in gold.

The word “carat” originates from the Middle Eastern practice of weighing precious gemstones against carob seeds as a measure of purity. If the gem weighed as much as one carob seed, it was then graded at 1 carat.

Carob seeds are remarkably consistent, so this was a surprisingly effective grading system given the constraints (or complete lack) of early technology.

Historical texts sometimes call it “SaintJohn’s Bread” because Saint John the Baptist is said to have survived in the wilderness by eating carob pods and wild honey. It’s not such a farfetched claim since carob is rich in essential vitamins and minerals.

The pods are occasionally referred to as “locust bean” as well. Locust bean gum, a natural thickener used in many packaged products, comes from the very same seed pods as carob. 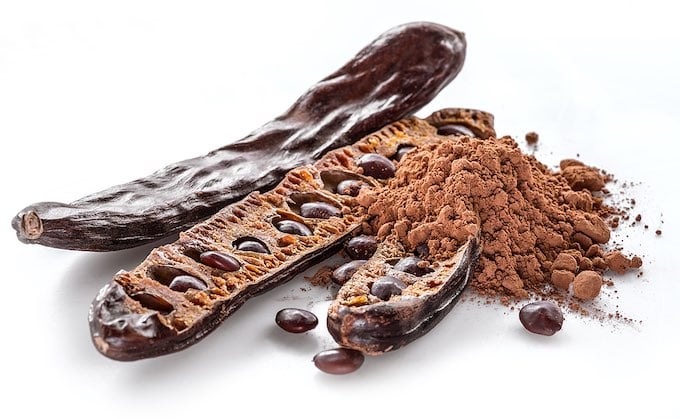 How does carob taste?

Carob is naturally sweet, with a subtly toasted, nutty flavor and hints of cereal and grain. If you’re expecting chocolate, you’ll be disappointed, but taste with an open mind (and palate) to enjoy a whole different flavor experience.

How to buy and store carob

Natural food stores are most likely to carry carob in the baking aisle nearby the cocoa powder. Though sometimes sold in bulk, you’re better off buying sealed bags, since it can otherwise sit around for years, exposed to the air and collecting dust.

Once opened, store carob powder in an airtight container in a cool, dry place. It will last for at least a year if kept free of moisture.

If local stores  don’t carry it, search online for roasted or toasted carob powder, which has a greater depth of flavor than raw. It should cost about $10 to 12 per pound for organic carob powder, on average.

Carob chips: Modeled after chocolate chips, this product is also available, but often made of less savory stuff. Hydrogenated vegetable oils take the place of cocoa butter and some also use whey powder (dairy) as a filler. Even the best options for carob chips tend to be waxy in texture, so you’re better off taking a pass, no matter how tempting they may seem. 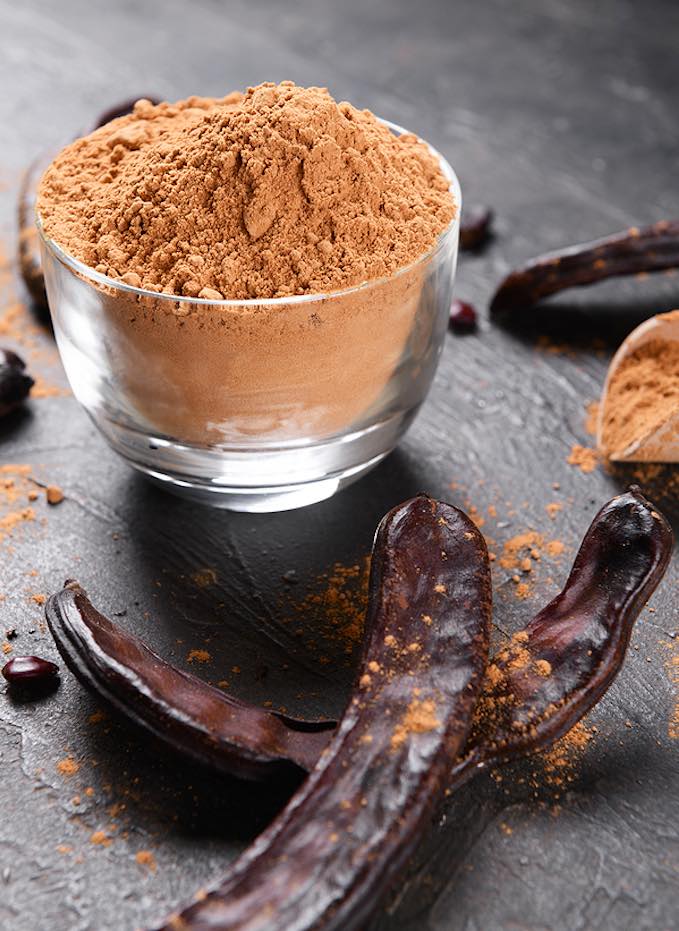 Comparisons to chocolate notwithstanding, carob has enough going for it to be appreciated for its own merits. Its reputation as being a good-for-you option isn’t overstated, even if the flavor comparisons might have been.

Carob has a negligible amount of fat, zero cholesterol, is low in calories, high in fiber, and has no caffeine or oxalic acid (the latter is a naturally occurring substance found in chocolate and other foods that inhibits the body’s absorption of calcium). This is also why carob is safe for dogs to each, while chocolate is not.

Carob contains moderate amounts of calcium and phosphorus, as well as smaller amounts of iron and some B vitamins. Here’s a complete look at the nutrition profile of carob. 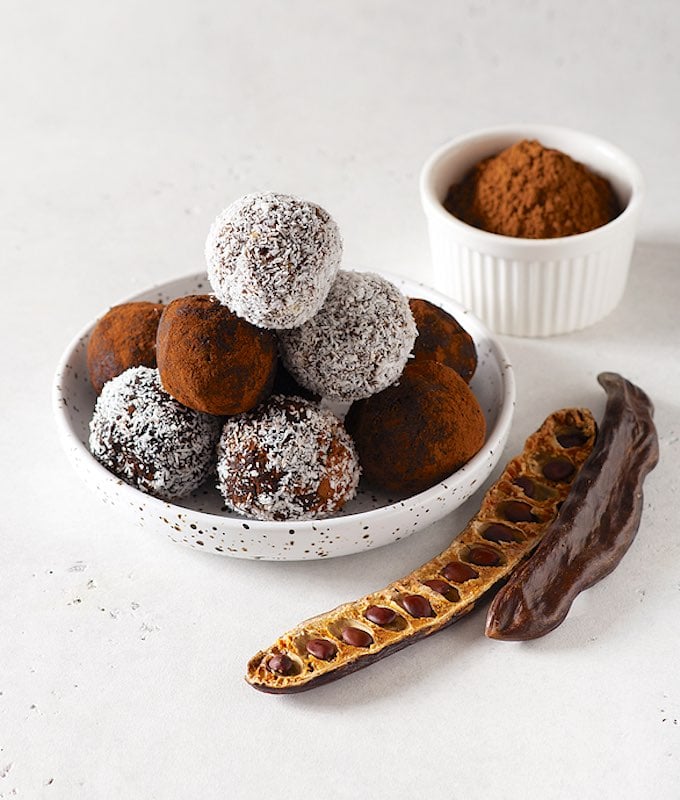 How to use carob powder in recipes

Although the flavor will be notably different, carob can be substituted in any recipe that calls for cocoa powder at a 1:1 ratio. Here are a few suggestions for its use:

Carob Brownies: When you’re craving a healthy dessert, look no further than Gluten-Free Vegan Carob Brownies, made with high-fiber oat flour and a nutrient-dense almond butter frosting. If you’d rather stick with a tried-and-true brownie recipe that calls for 1/4 to 1/3 cup cocoa powder, substitute ½ cup carob powder for a more intense flavor.

Carob Shake: For 2 servings, combine in the container of a food processor or blender 1 cup plant-based milk, 2 tablespoons carob powder, 3 or 4 ice cubes, and agave or maple syrup (or try the less common barley malt syrup, which really makes it a “malted”) to taste. Process until frothy for a delicious and refreshing drink. You could also take this opportunity to sneak in an extra serving of fresh spinach, like in this Carob Green Smoothie.

Carob energy balls: Much like you’d use cocoa powder to make energy balls, swap in carob powder for another kind of flavor profile. Here are Carob Energy Bites, made with just four ingredients.

Dog Treats: If you like to dote on your dogs, make something more special than plain biscuits, such as Woofie Pies, modeled after the chocolate and vanilla cake sandwiches typically known as whoopie pies. Dog treats are actually a good use for carob, as it’s widely accepted that chocolate isn’t good for dogs.

Hot carob drinks: Use carob powder much as you’d use cocoa powder in hot beverages made with plant-bsed milk. Try this dairy-free Warm Spiced Carob Milk.

Cereal topper: Sprinkle a teaspoon or two of carob powder over a serving of cold breakfast cereal. The same can be done for hot cereal like oatmeal, to make a warming breakfast in the winter. See this recipe for Quick Gluten-Free Carob Oats.

Dark bread enhancer: To add a rich flavor to homemade bread dough, substitute 2 to 3 tablespoons of each cup of flour with carob powder. This is especially nice in dark rye breads like this hearty Old World Black Bread.

Previous Post: « A Guide to Fresh Ginger — with tips and recipes
Next Post: Green Beans with Tomatoes and Chile Peppers (Ejotes) »