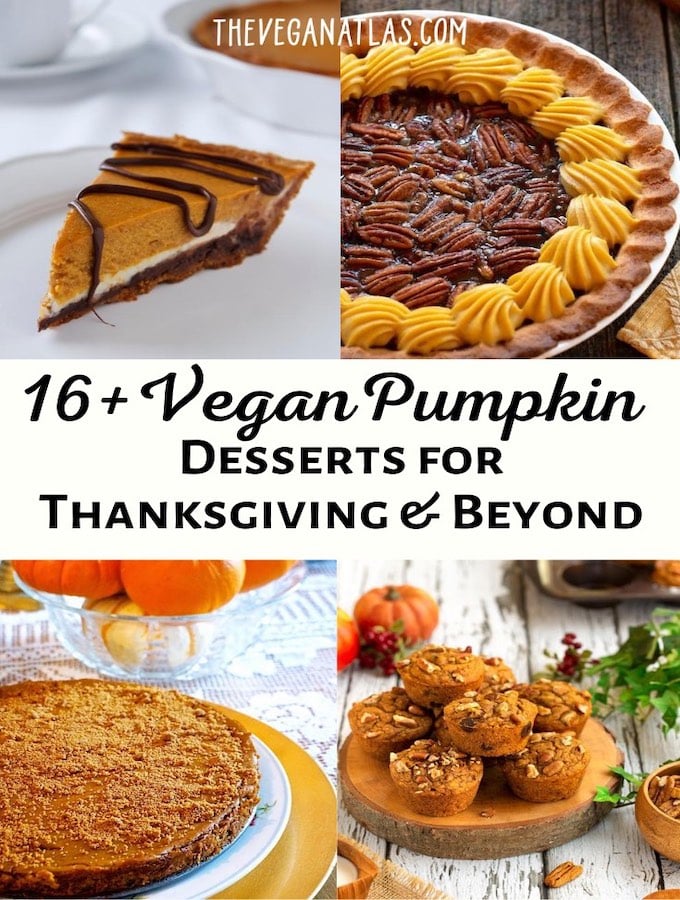 Here’s a slew of recipes for vegan pumpkin desserts, from classic pies to creative concoctions like doughnuts, brownies, a sweet dip, and more.

Thanksgiving dinner without pumpkin pie is almost unimaginable to most people, no matter what dietary bent they embrace. To that end, you’ll find a few versions (vegan, of course) of the classic dessert. And of course, you need not limit your pumpkin-y desserts to the holiday. They’re welcome — and provide guilt-free comfort — throughout the cooler months.

But we won’t stop at pumpkin pie, thanks to the creativity of the food bloggers who participated in this tasty round-up with permission for links to recipes and the use of their photos.

You can replace pumpkin with butternut squash in most recipes. See How to Cut Butternut Squash Easily — and you can apply those tips for sugar pumpkins 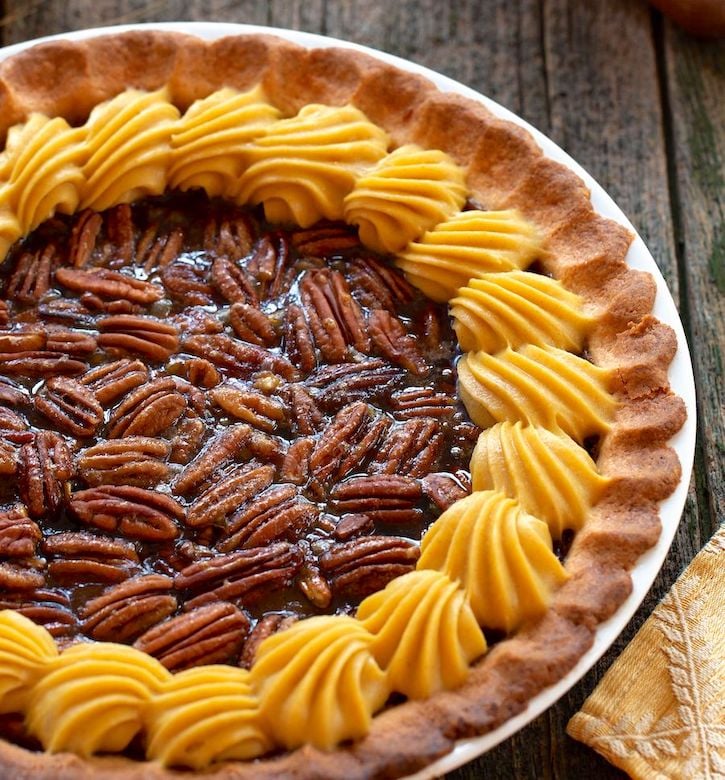 Vegan Pumpkin Pecan Pie: What to serve — pumpkin pie or pecan pie for your special holiday dessert? Now, you don’t have to choose. From BitterSweet Blog, Hannah Kaminsky’s vegan pumpkin pecan pie is as beautiful to look at as it is delectable to eat. 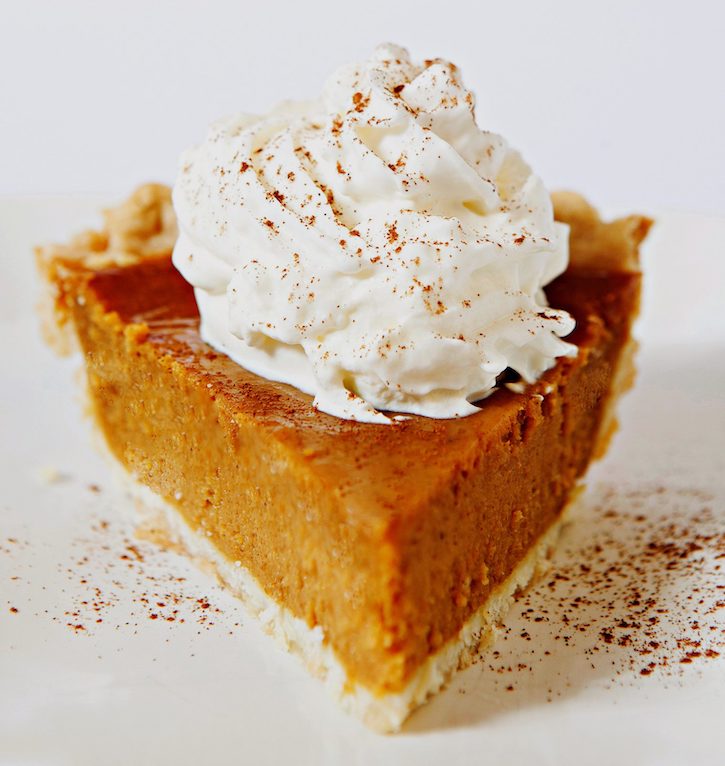 Vegan Thanksgiving Pumpkin Pie: This Wife Cooks presents the iconic, quintessential pie of Thanksgiving. Rich, creamy, and loaded with cinnamon, nutmeg, ginger, and cloves; the classic spices of the season, this easy and comforting pie continues to be a family favorite year after year. 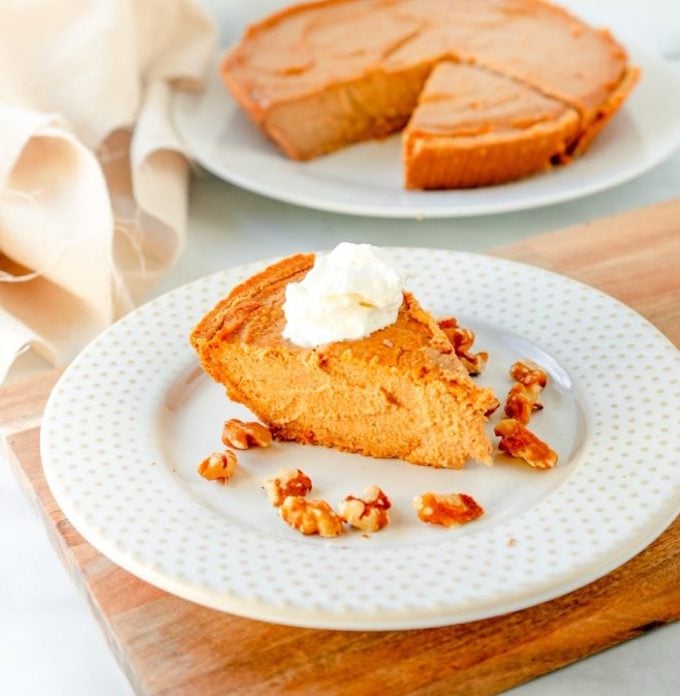 Best-Ever Vegan Pumpkin Cheesecake: From Wow, It’s Veggie?! — a pumpkin cheesecake that’s so easy to make and 100% vegan! The flavor is so perfectly creamy and it takes no time at all. 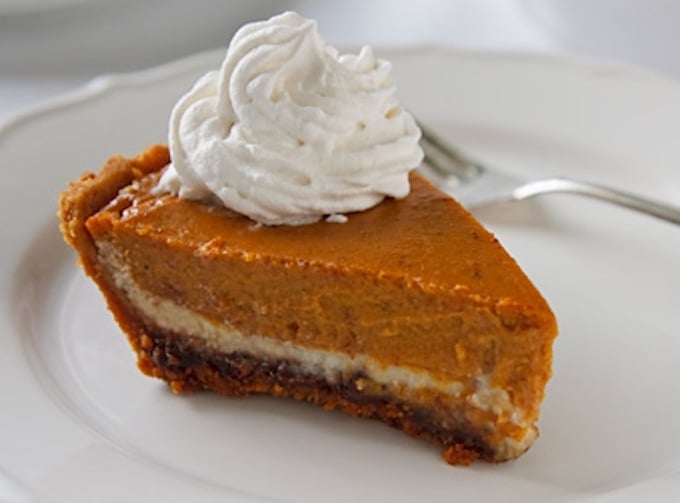 Vegan Pumpkin Cheesecake with a Hint of Chocolate: Another cheesecake in this roster of vegan pumpkin desserts, this one treats your taste buds to a subtle chocolate burst with each bite. Also shown at the top of this post with a chocolate drizzle as an alternative to vegan whipped cream, as shown here. 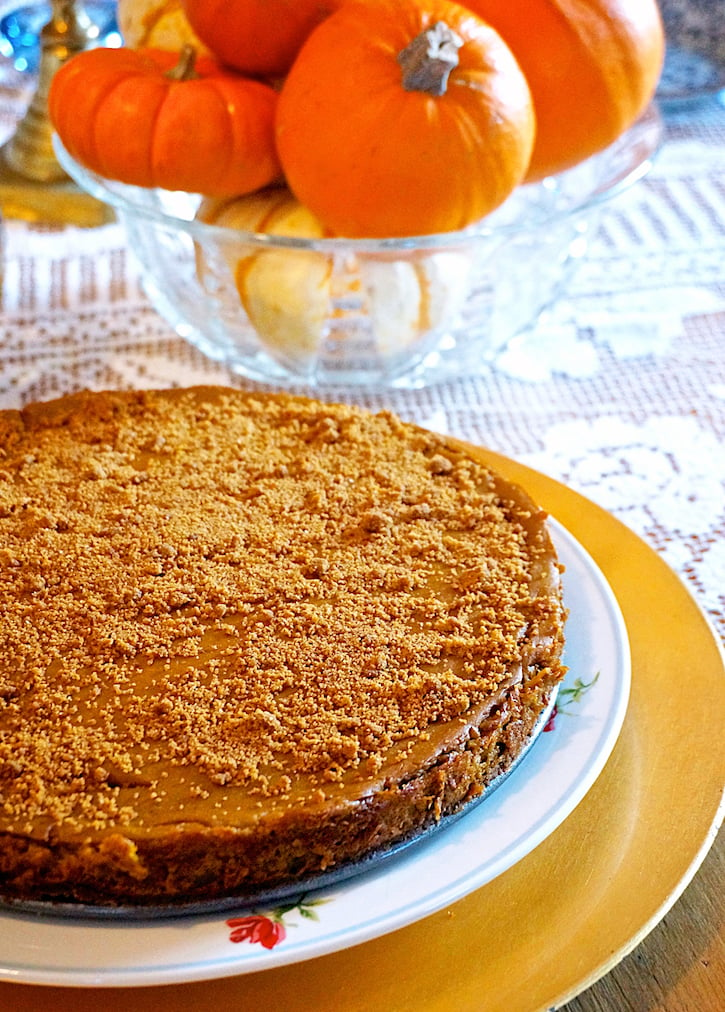 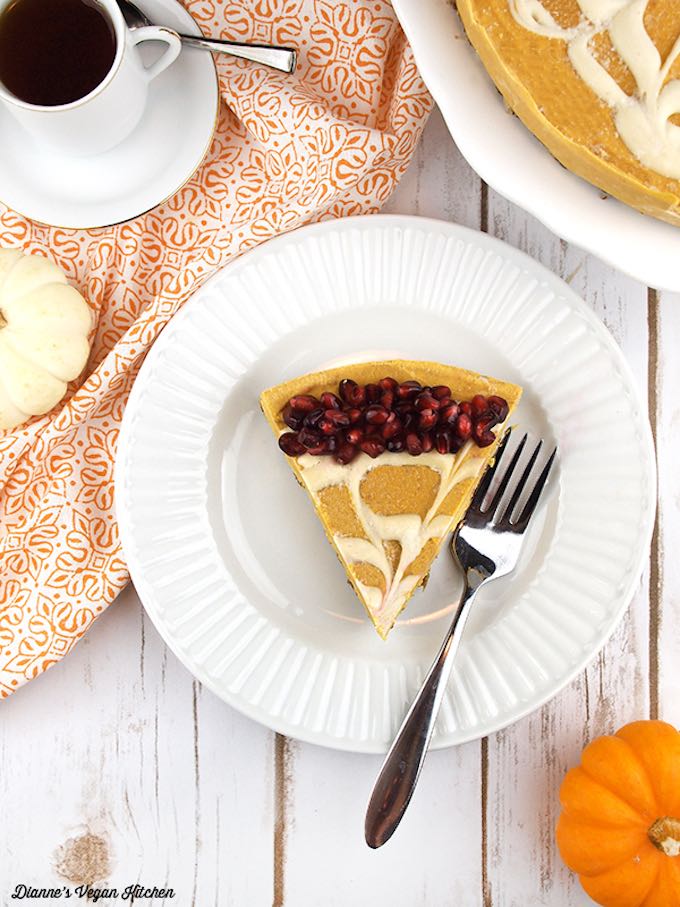 No-Bake Vegan Pumpkin Swirl Cheesecake: If by some chance your Thanksgiving celebration takes place in a warm climate, you don’t have to turn the oven on for this one. Dianne’s Vegan Kitchen says that your Thanksgiving guests will never guess that there’s no dairy is in this delicious no-bake vegan pumpkin swirl cheesecake! 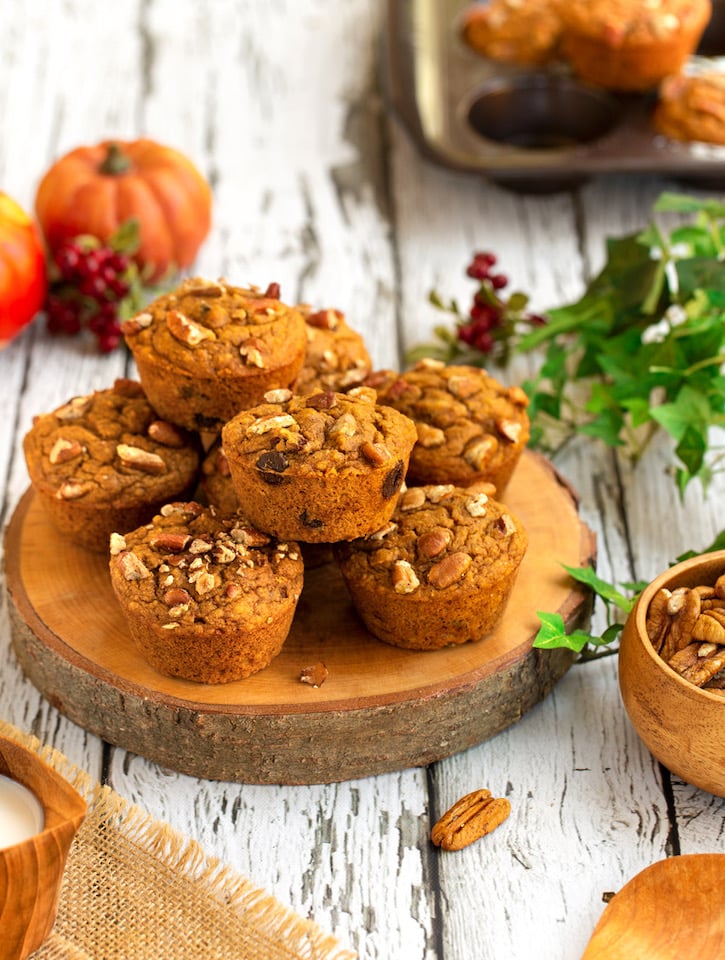 Thanksgiving Morning Chocolate, Fruit, and Nut Pumpkin and Cranberry Muffins: What better way to start the holiday than with these delectable, moist, and pumpkin-y muffins by Fran Costigan, aka “The Queeen of Vegan Desserts”? 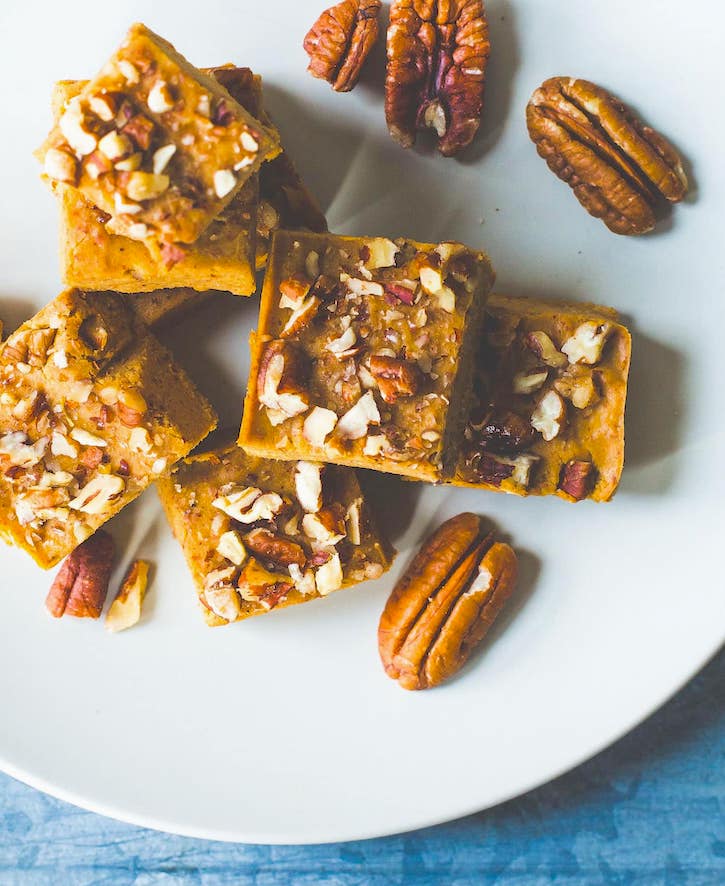 Magic Vegan Pumpkin Pie Fudge: Cut into tiny squares, this fudge is like bite-size pieces of warmly spiced pumpkin pie or pumpkin cheesecake that happens to be vegan (and refined sugar-free). From HeartBeet Kitchen, who says: “I love that it keeps in the refrigerator really well, almost better a few days after making it because the cinnamon and nutmeg get a chance to deepen.” 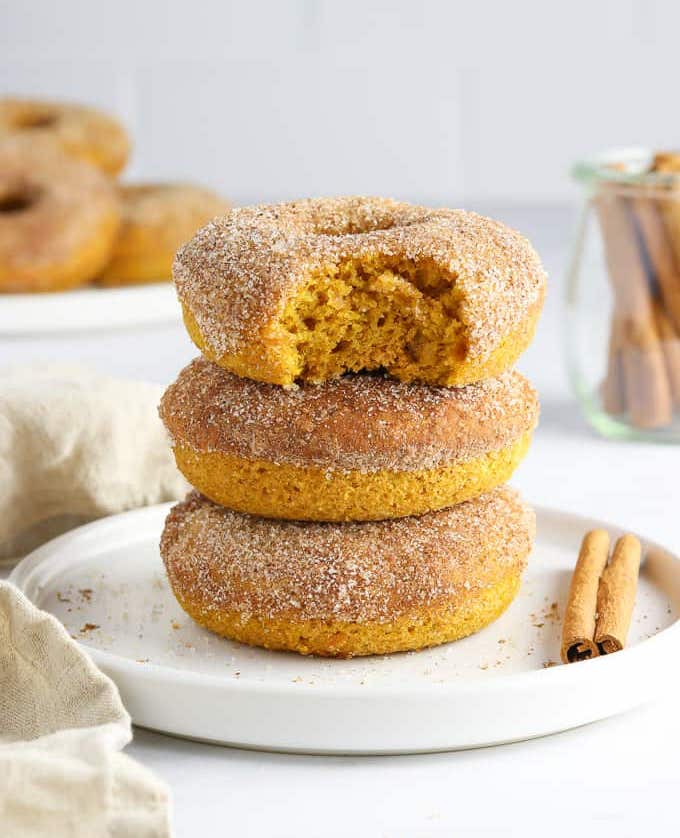 Vegan Pumpkin Donuts with Cinnamon Sugar: Vegan Huggs presents Vegan Pumpkin Donuts, the perfect way to welcome fall! They’re warm-spiced, pumpkin-y, and frosted with a cinnamon-sugar coating. The ingredient list is simple and they’ll be ready in a flash! 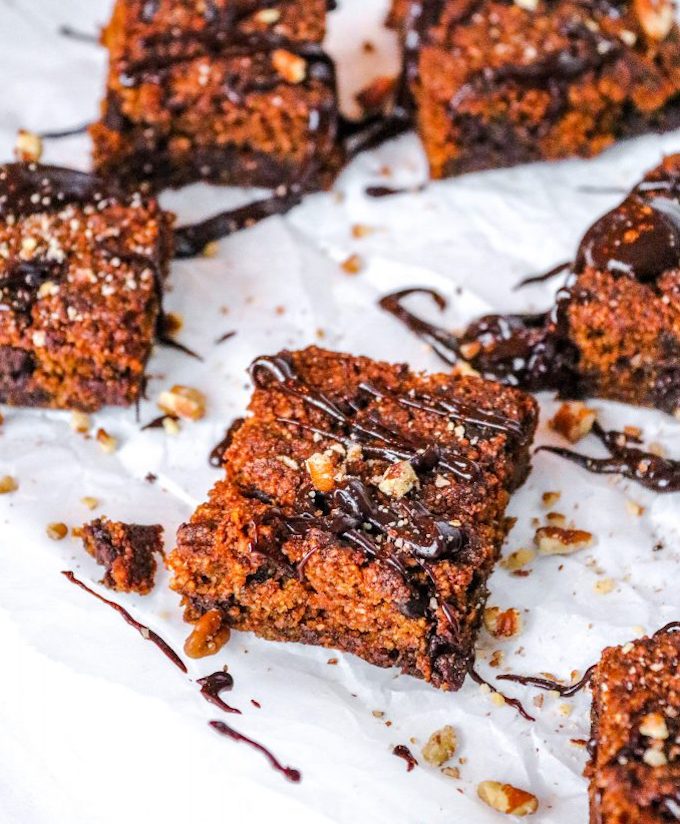 Easy Vegan Pumpkin Pie Brownies: Another luscious treat from Wow, It’s Veggie?! These vegan pumpkin brownies are so yummy and blend the best flavors from fall! It is perfect for chocolate lovers and pumpkin lovers alike! 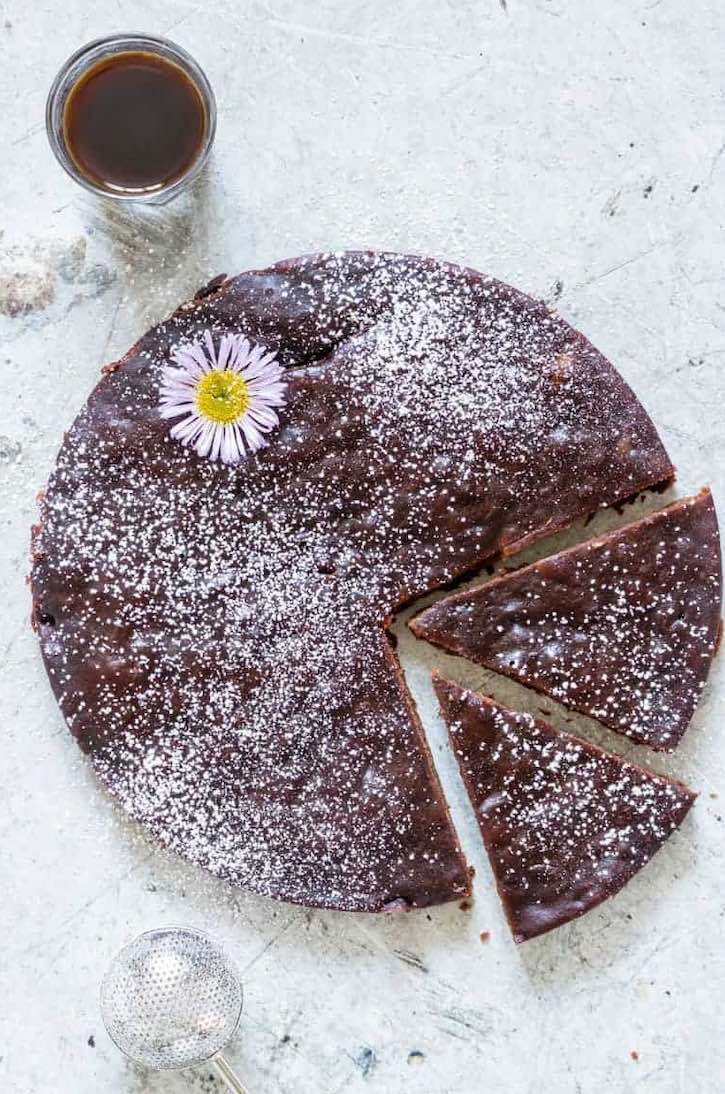 Instant Pot Pumpkin Brownies: For anyone who wants to make dessert in the Instant Pot, Recipes from a Pantry offers Instant Pot Brownies. These are fudgy, moist, and full of flavor that fully celebrates pumpkin season. 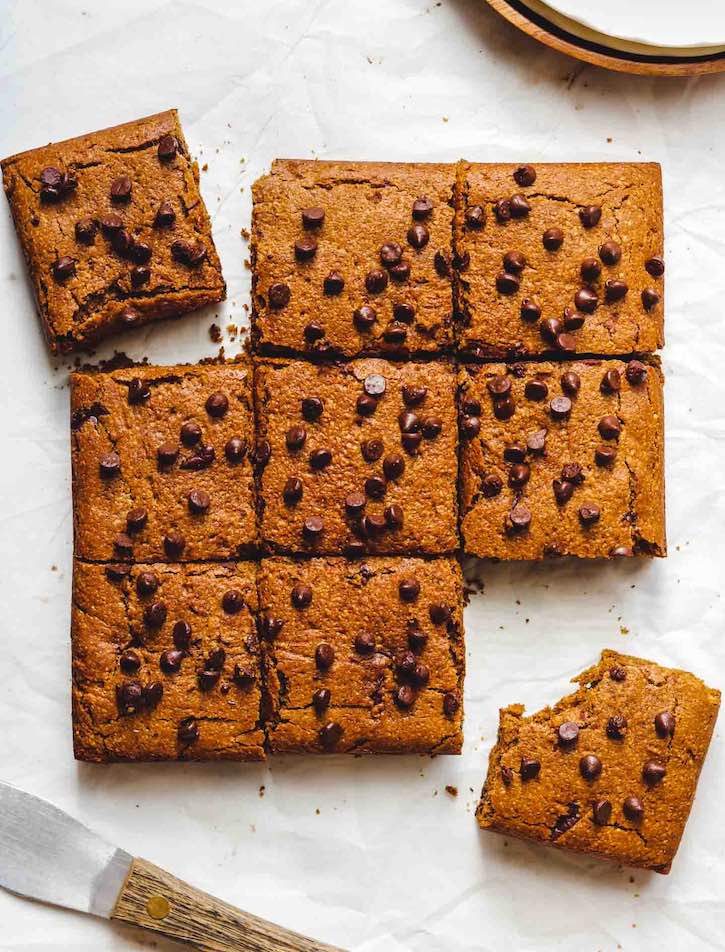 Pumpkin Pie Bites: Continuing with the gluten-free theme, these Pumpkin Pie Bites are a favorite holiday dessert of Just What We Eat. The crust is “buttery” and flaky, and the filling has the most delicious pumpkin and warm spice flavor. 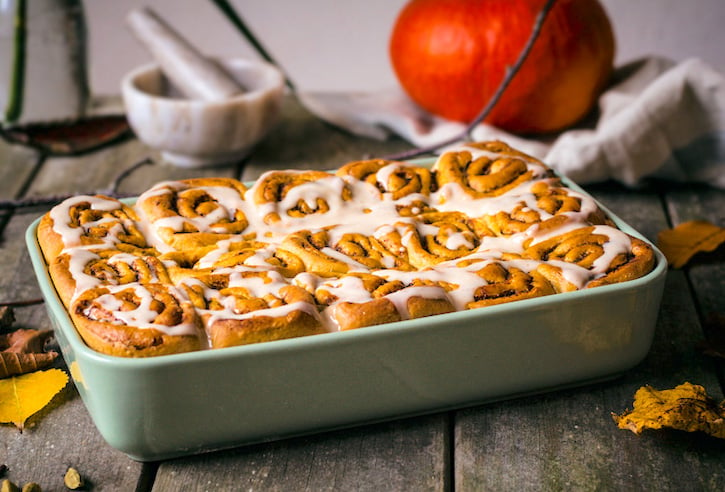 Vegan Pumpkin Cinnamon Rolls: From Occasionally Eggs, these vegan pumpkin cinnamon rolls are a perfect fall dessert, and just the thing for a weekend project as the weather starts to cool down. Total comfort food, made healthy(ish). 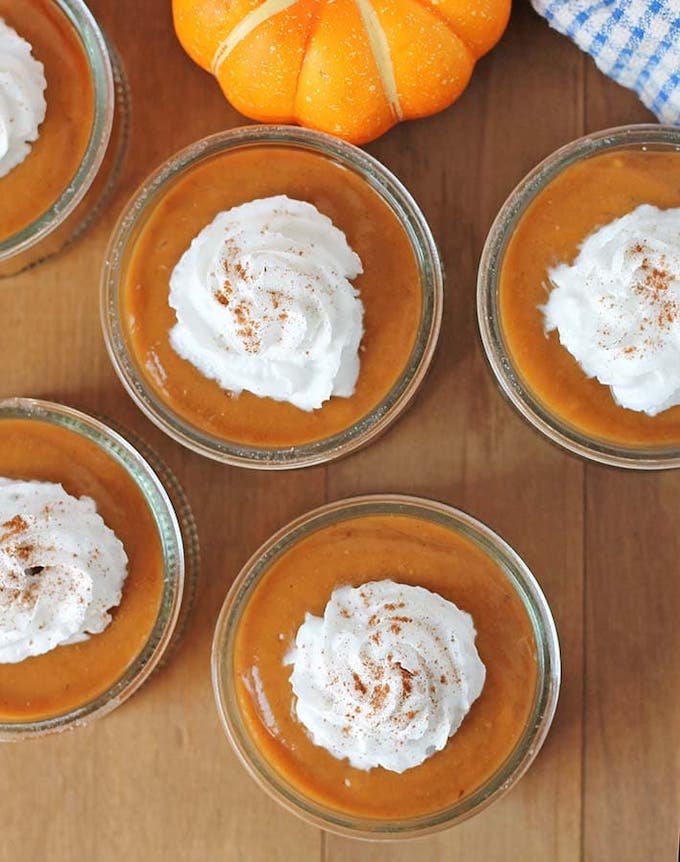 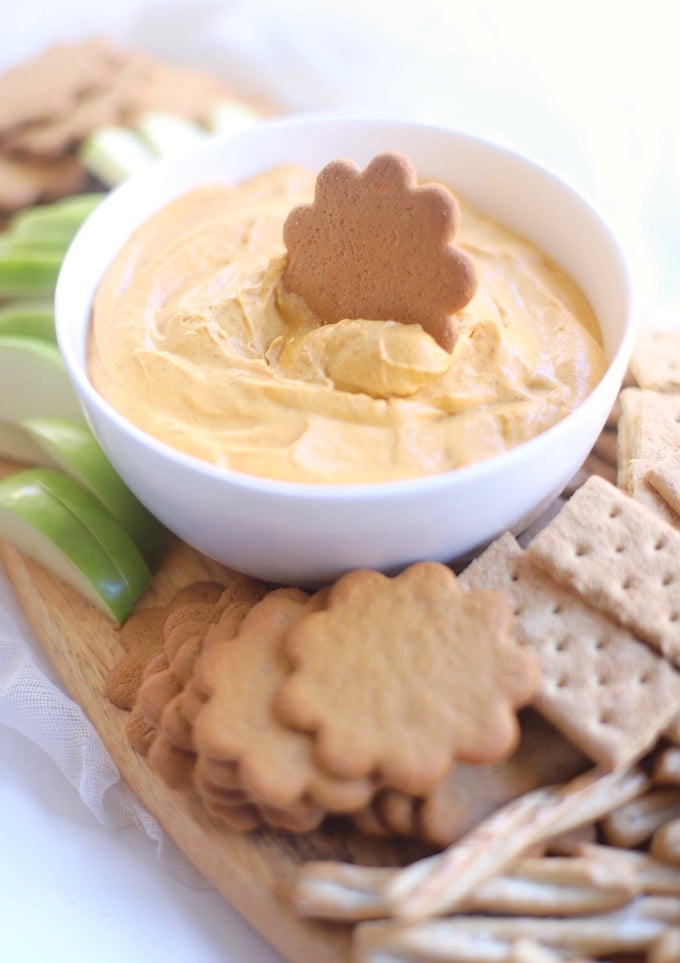