Detroit-Style Pizza is characterized by a square or rectangular crust on which the cheese goes first, keeping it extra crispy. Then comes pepperoni, and finally, a full-bodied sauce goes on top. Here’s how to make it plant-based, for a surprisingly good vegan Detroit-style pizza. 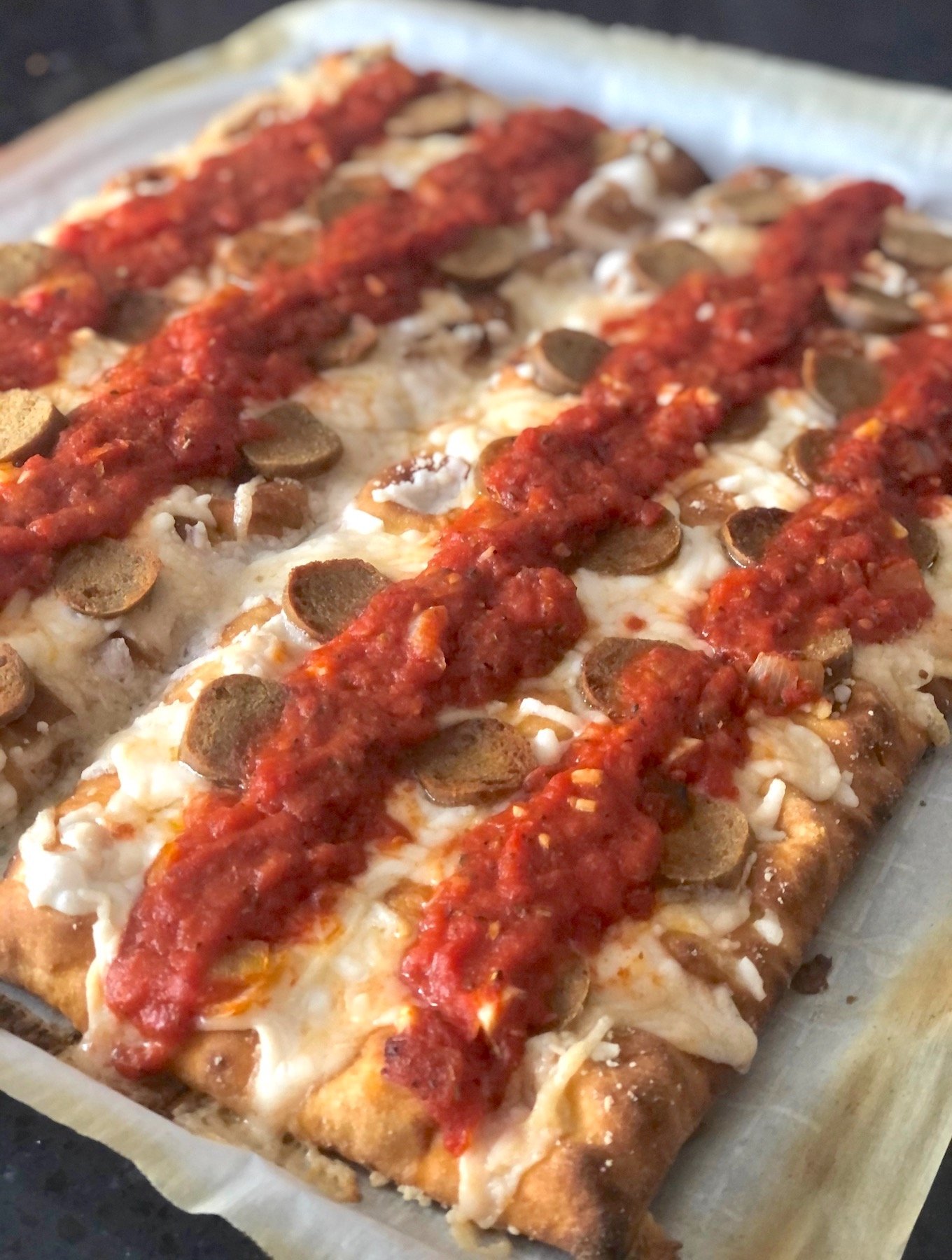 I grew up right outside Detroit, yet up until last week, I had never heard of this type of pizza. I happened to see a story about how Pizza Hut is rolling out an exhaustively tested Detroit-style pizza nationwide.

It was Buddy’s Detroit-Style Pizza (a motor city fixture for more than 75 years) that invented and popularized this take on pizza. Buddy’s has spread across Michigan, and this style of pizza has traveled all across the nation.

A vegetarian very early on in life, I wouldn’t have been into all that pepperoni, so apparently Detroit-style pizza never got on my radar. Now I know. 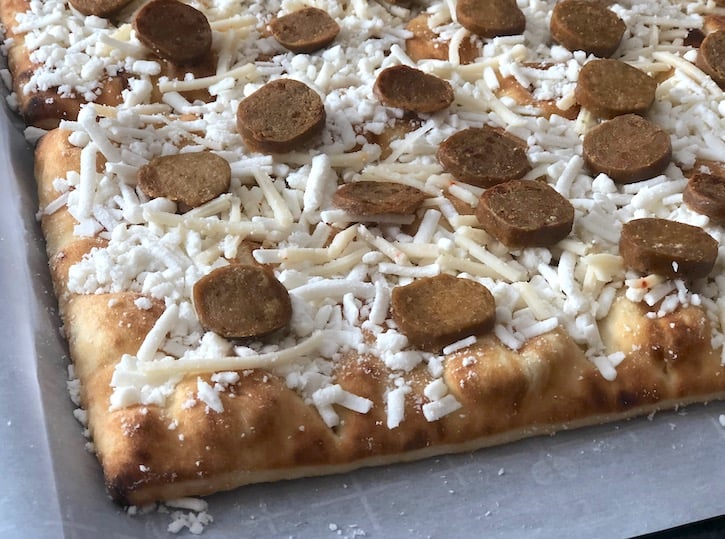 The vegan cheese goes on first, then the vegan pepperoni

The things that make the Detroit pizza unique are the square or rectangular crust and the arrangement of the toppings. The cheese goes on first (lots of cheese, sometimes Wisconsin brick cheese), coming as close to all the edges as possible.

Then comes lots of pepperoni, and finally a robust tomato sauce. The sauce is usually spread over the top in lines rather than dolloped on.

This formula isn’t hard to veganize — vegan mozzarella shreds, followed by vegan pepperoni, and finally the sauce on top. 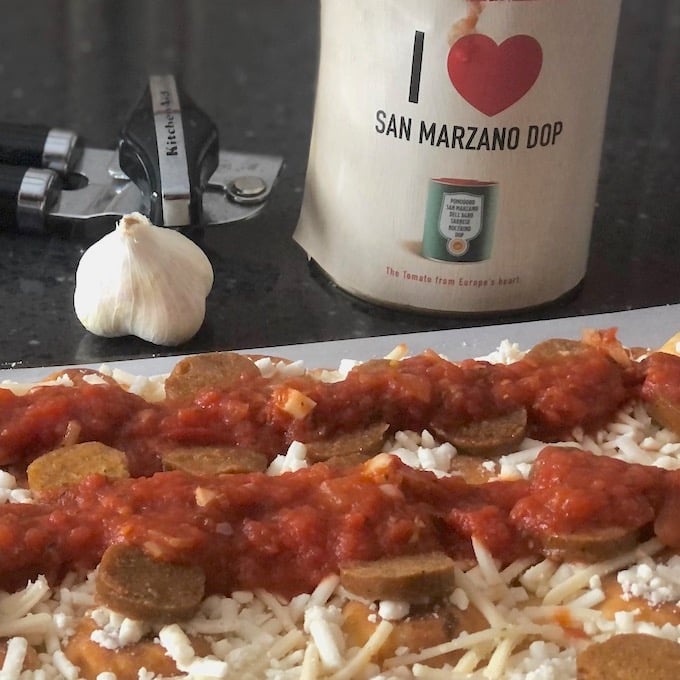 It’s kind of ingenious, actually. Putting the sauce on top helps the crust get — and stay — extra crispy. And a good, richly flavored homemade sauce is a must, because that’s what will hit your palate first.

Ideally, use the best quality crushed tomatoes you can find. I used San Marzano Dop whole canned tomatoes and coarsely pureed them.

I will allow for a prepared crust, but don’t shortcut the sauce — yes, there are good quality pizza sauces, but those are good for when the sauce goes on the bottom and doesn’t matter as much. You’ve got to make your own sauce for this kind of pizza! 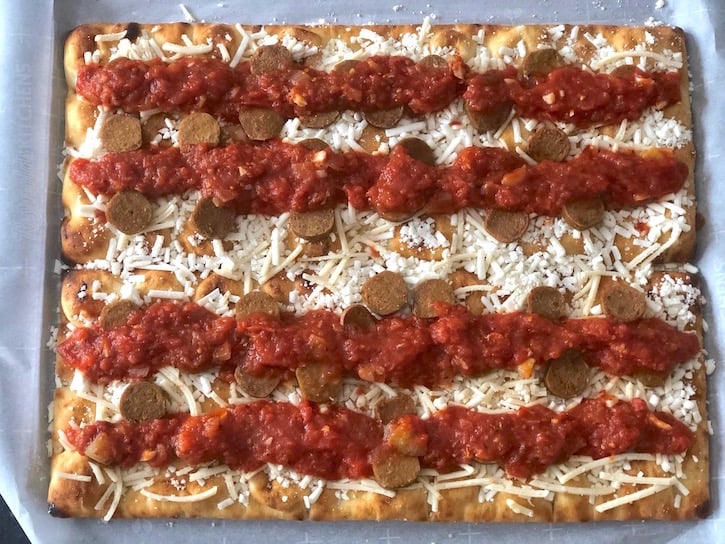 Ready to go into the oven

For this pizza, I used a ready-made rectangular crust. I really like Brooklyn Bred. Feel free to make your own crust (see this site’s recipe for Whole Wheat to Spelt Pizza Crust).

Or if you must, use a readymade round crust, but be prepared catch flak for not being Detroit enough. Hey, you’re already converting a meaty and cheesy classic, so what’s another little tweak?

For the pepperoni, you can simply use a package of vegan pepperoni, or two links of vegan sausage, very thinly sliced. Buddy’s, the originator of the Detroit-style pizza, has some veggies as optional toppings on their menu, so go ahead and use peppers, broccoli, mushrooms, onions, etc. to make this a more veg-centric pizza.

Or, if you want to keep it to the basic recipe, make sure to serve with a bountiful tossed salad to get some vegetables into the meal. 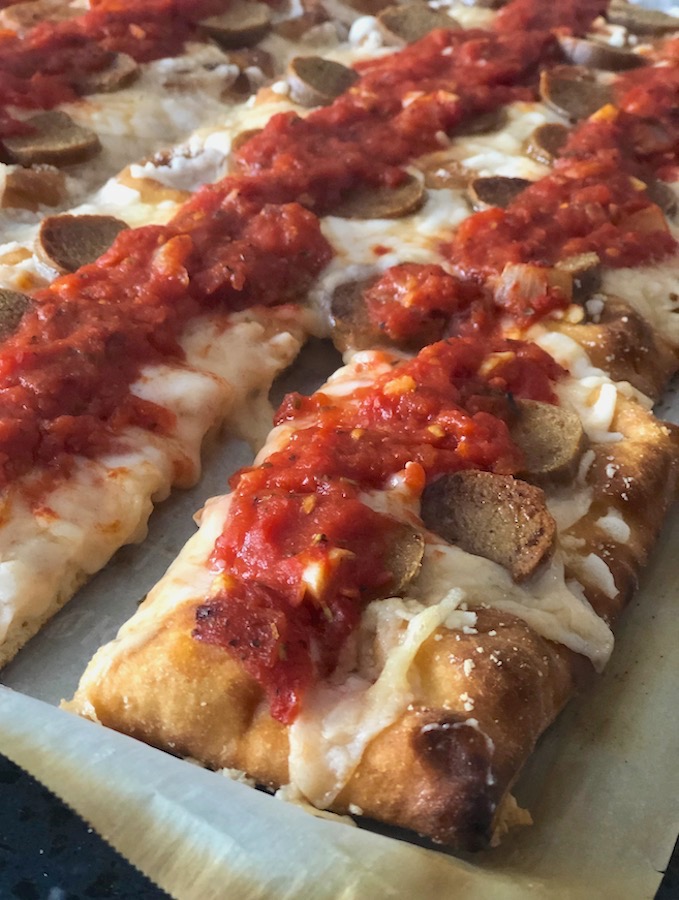 Get it while it’s hot!

Make your own crust: Here's our Whole Wheat or Spelt Pizza Crust.

Make it veggie: Add some of your favorite pizza vegetables — peppers, onions, mushrooms, broccoli, etc. Sauté first, and add with the pepperoni layer.

If you like this pizza, you may also enjoy … 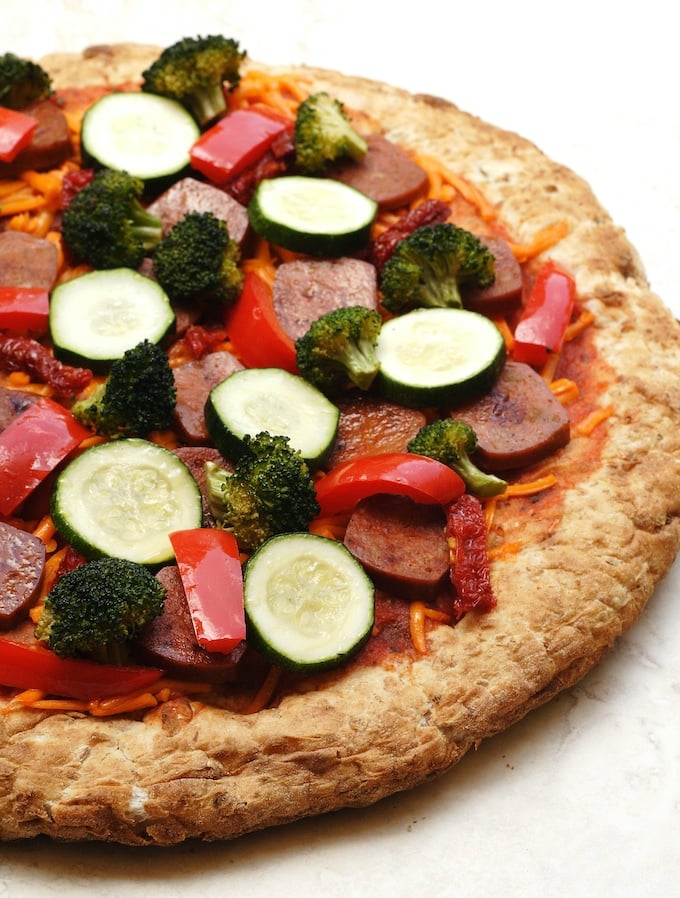 A selection of vegan pizzas