This potato and arugula salad combines three kinds of potatoes with the peppery greens for an earthy flavor with plenty of eye appeal. If you can’t find purple potatoes, simply substitute another sweet potato or two, and the salad will still be gorgeous and delicious. 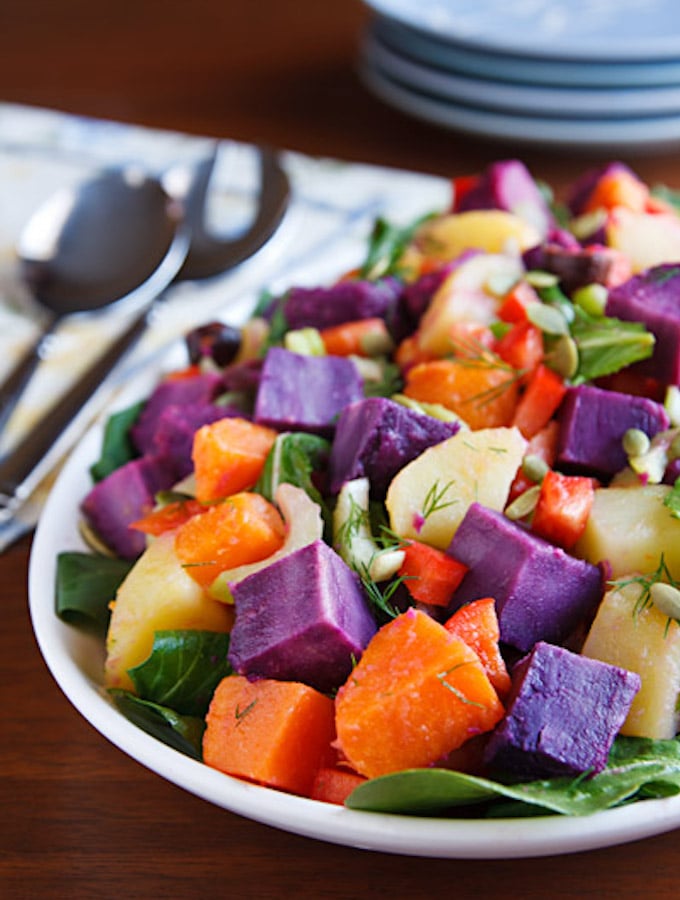 Purple potatoes have extra benefits, especially more antioxidants. This probably shouldn’t be too surprising, given their vivid color.

Varieties of purple potatoes: These include Purple Peruvian, Purple Viking, and Purple Majesty, and others. They’re not always readily available, so keep your eye out at farmer’s markets and well-stocked supermarkets and natural foods stores. Here’s more detailed info on these violet beauties:

These pretty potatoes come in a number of varieties, including Purple Peruvian, Purple Majesty, All Blue, Congo, Vitilette, and Purple Viking. Some are considered heirloom varieties, and others are conventional (despite their unconventional looks).

Occasionally, purple potatoes with less of a vivid color are referred to as blue potatoes, but with few exceptions, we’re still talking about the purple varieties. One notable exception might be the Adirondack Blue, which is, honestly, more purple than blue.

While it may be more likely to spot them at seasonal farm markets, they’re also available in well-stocked supermarkets and specialty groceries.

Though the flavor of purple potatoes isn’t dramatically different from what you’d expect from potatoes, they are a bit sweeter. And they do have a nutritional advantage: the pigment that gives them their dramatic color, Anthocyanin, is a valuable antioxidant. In fact, purple potatoes contain four times as much antioxidant than ordinary potatoes, like russets. They’re also a good source of potassium. 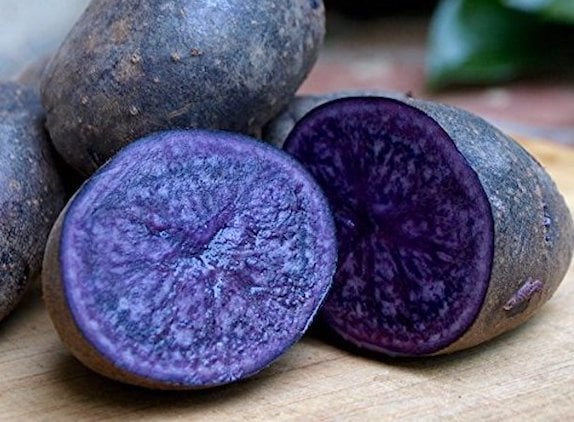 The texture of purple potatoes is waxy, like red-skinned or Yukon gold, rather than mealy or mushy, like russet. This makes them especially nice as an addition to potato salads.

While this colorful potato and arugula salad is perfect for special occasions, especially in the spring and summer, it’s easy enough to make for everyday meals. You’ll find some additional info on purple potatoes following the recipe box. 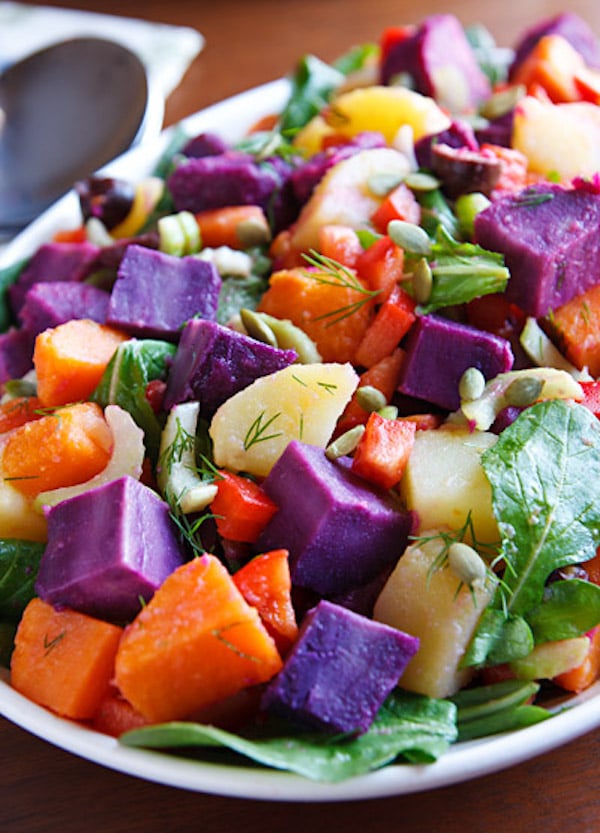 Get to know arugula: Though its flavor is more assertive, arugula is similar to spinach in the ways it can be used, and can be interchanged with it in many dishes, or it can be used to replace part of the amount of spinach called for.

Like other dark leafy greens, arugula is a nutrient dense food. It’s packed with vitamins A, C, K, and folate. As far as minerals, it’s particularly rich in calcium and potassium. It’s a good source of fiber and antioxidants. Here’s more about its nutritional profile. See lots more in this site’s Guide to Arugula, with Tips and Easy, Tasty Recipes.

You can swap the arugula out for baby spinach, watercress, or tender Asian greens like tats or mizuna.

Based on 8 servings. Nutrition data is always an estimate depending on program used to calculate and exact products used. 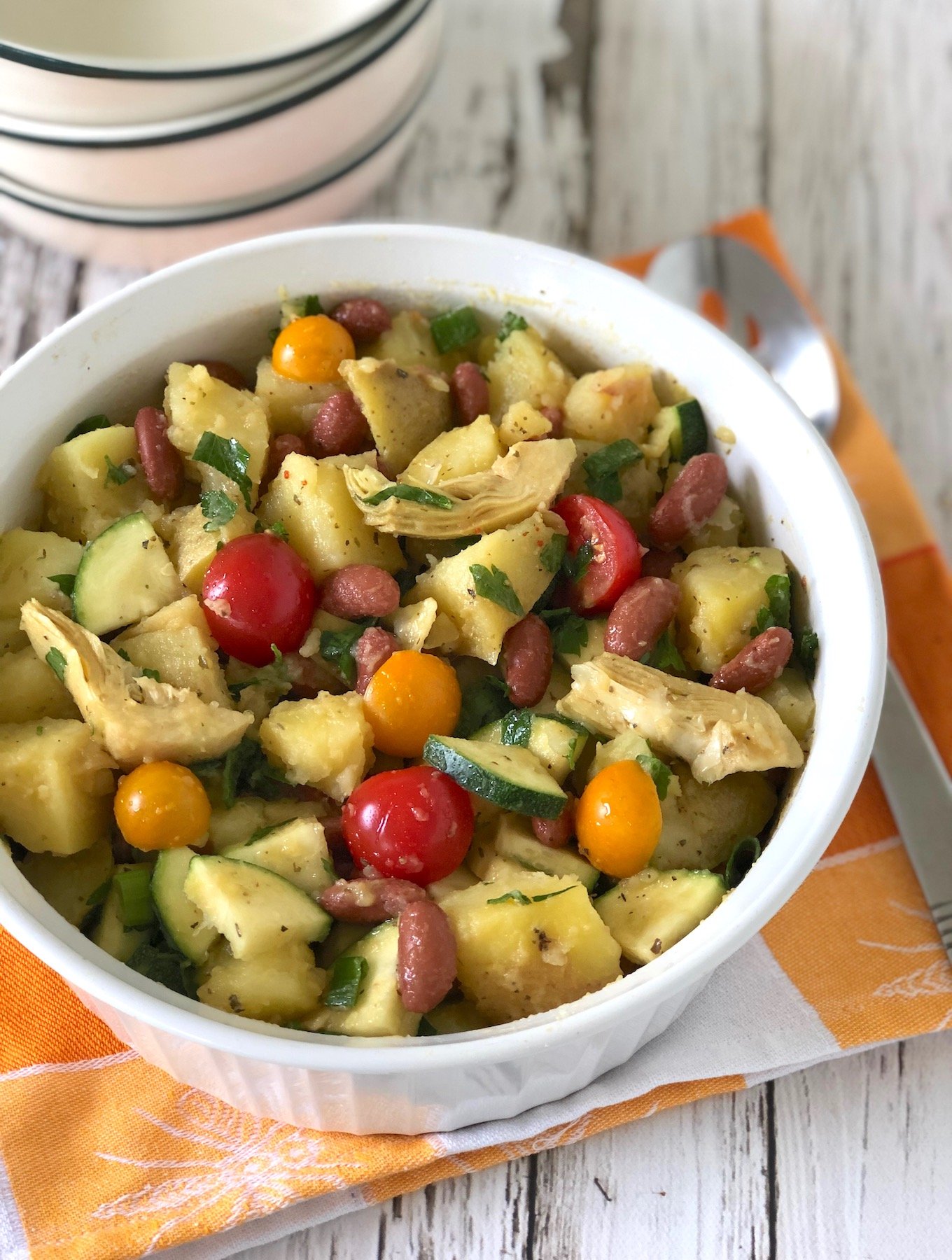