Vegan shrimp scampi is just one of a growing array of dishes you can make with today’s innovative plant-based seafood alternatives. 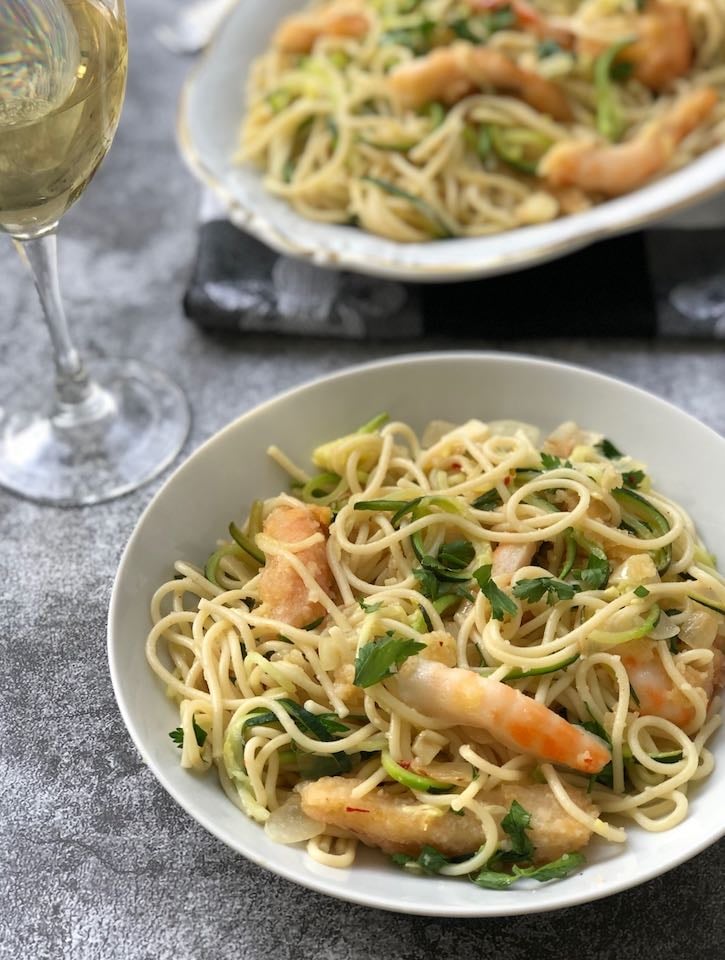 I’ve never actually had shrimp scampi, let alone vegan shrimp scampi, but it isn’t hard to figure out how to transform it into a plant-based version.

I didn’t grow up eating much fish or shellfish. Though my Jewish family wasn’t religious and didn’t keep Kosher, seafood was pretty much limited to gefilte fish, which I loathed, and lox for special occasions (see our easy vegan Carrot Lox!).

I did, on a few occasions, have shrimp before I went vegetarian, but that was such a long time ago that my memory of it is quite dim. I recall that it’s kind of rubbery, and doesn’t have much flavor.

So what motivated me to pick up a package of Sophie’s Kitchen ™ (a company that makes plant-based seafood alternatives) Coconut Breaded Shrimp, if nostalgia wasn’t involved?  Mainly, it was curiosity, and a desire to support companies that are developing products to replace those that have a catastrophic environmental and ethical footprint. More about that following the recipe box, if you’re interested. 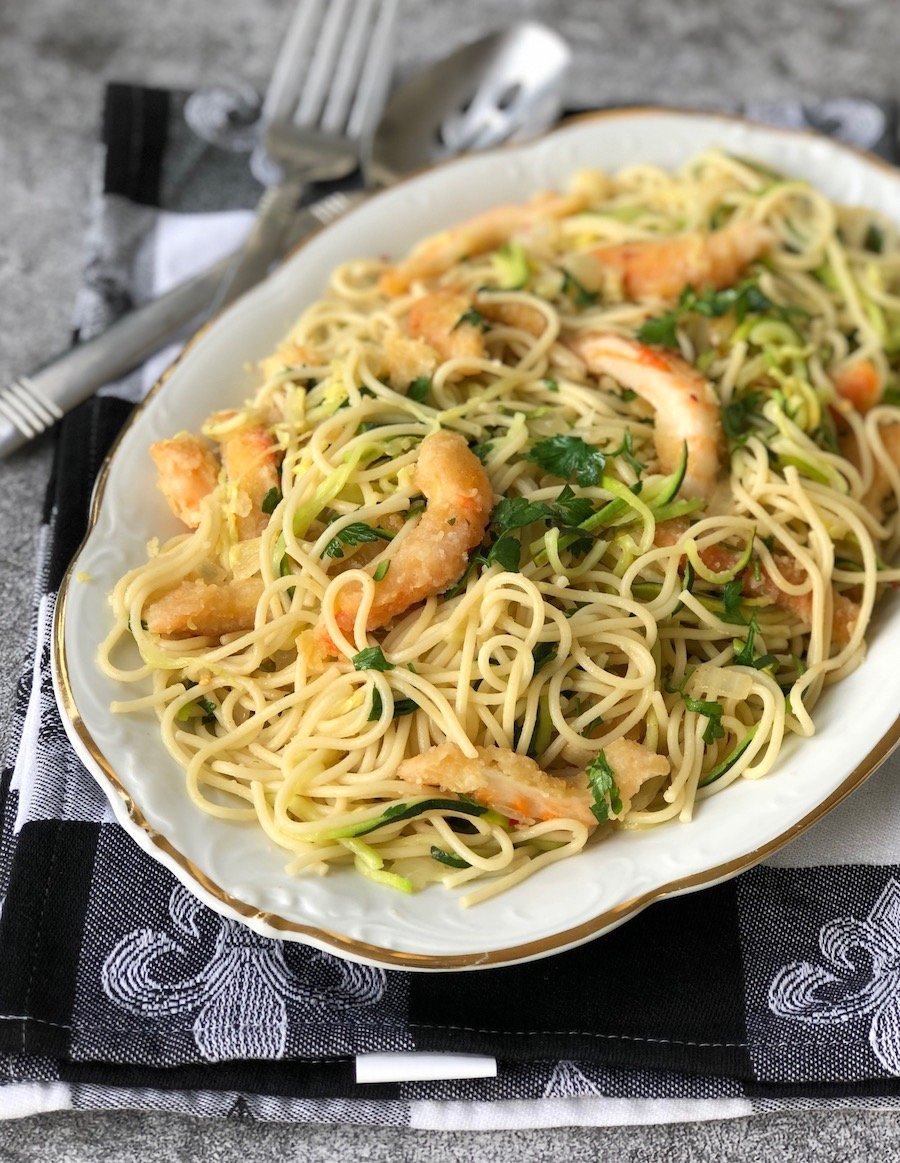 Garlicky and lemony, just as it should be: I enjoyed the garlicky and lemony flavors of this veganized shrimp scampi. Because I try to incorporate vegetables to any main dish, I also added a spiralized zucchini.

The plant-based shrimp started out breaded, but I think I jostled it too much in the preparation, causing the breading to fall off. That revealed more of the faux shrimp beneath, which for shrimp-lovers (or those who miss shrimp) could be a fun novelty.

I was a bit flabbergasted by how real it looks; though in my squeamish opinion, at least the plant-based shrimp doesn’t have those disgusting tails and legs and tentacles and whatnot. 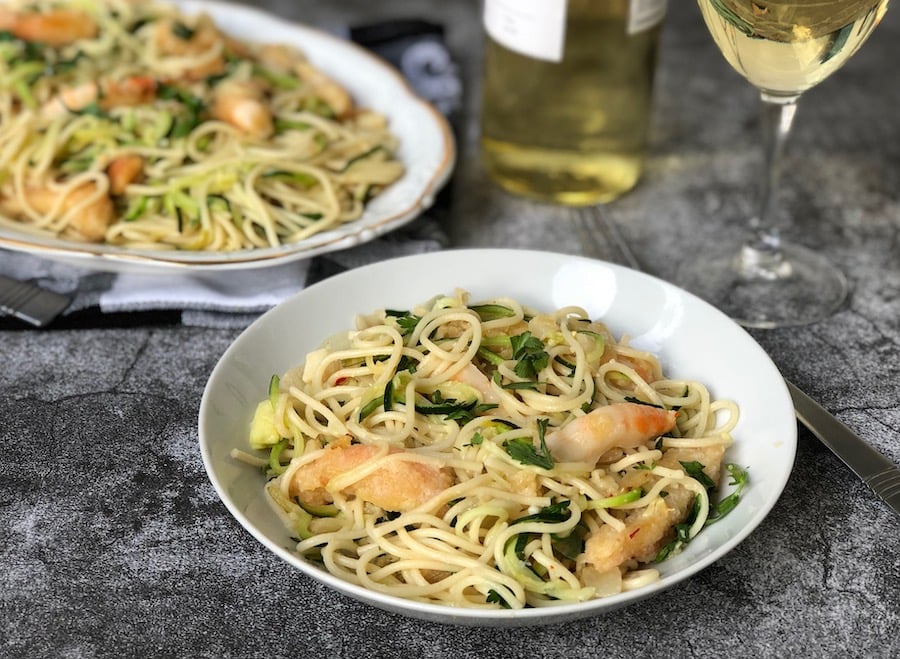 Most well-stocked supermarkets carry fresh spiraled zucchini (aka zucchini noodles) in the produce section. Or, you can just finely dice a zucchini if you prefer.

The problem with shrimp — and why you shouldn’t eat it

The shrimp industry is an epic nightmare, rife with abuses of all kinds. It destroys delicate ocean ecosystems, causes a serious amount of bycatch. That’s the term used for other sea life (which can include Dolphins, turtles, and other fish) that’s inadvertently caught — and killed — in nets used for catching small fish and shellfish like shrimp.

Then, there’s the terrible not-so-secret practice of child labor and slavery that’s an intrinsic part of the industry worldwide.

From Serious Eats: Recent reports have shown it comes at enormous cost. The same farms that make bottomless shrimp baskets possible are also responsible for the devastation of ecosystems that are important for the entire globe, and the industry as a whole is rife with human rights abuses, like slavery, child labor, and murder.

From NPR’s The Salt: Thailand is the source of one-third of all shrimp imported by the United States. American retailers (and consumers) like it in part because it is cheap. Labor abuses at Thai shrimp factories and farms that export are well-documented. As PBS reported last year, Thai labor activists have documented abuses of Myanmarese migrant workers who work in the shrimp-peeling sheds that supply shrimp to larger factories for export to the U.S. 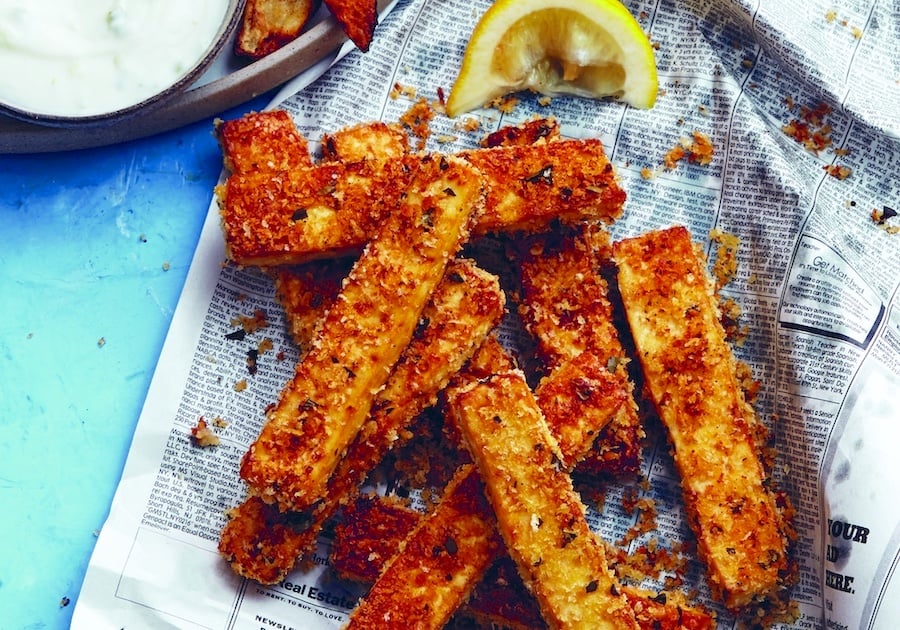