Here are 12 unusual and exotic fruits you need to try at least once in your lifetime! Some of them may not taste like the familiar apples, bananas, and oranges that we’re used to, but they’re worth seeking if you like variety. Enjoy them on their own or combined with more familiar seasonal fruits. 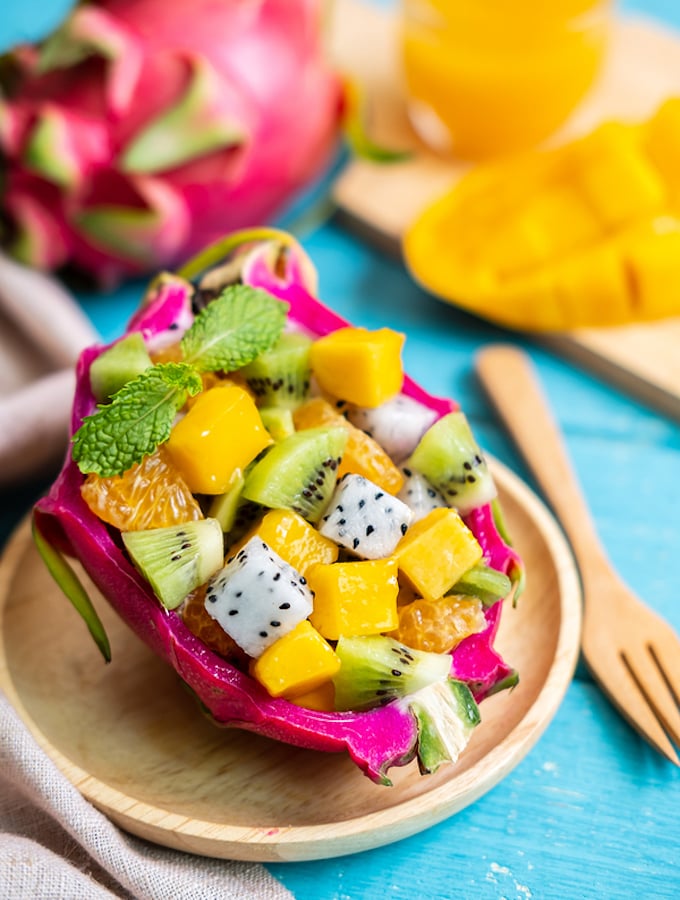 Who doesn’t enjoy eating sweet, fresh fruit? In addition to their wealth of vitamins and minerals, fruit — AKA “nature’s candy”— satisfies your sweet tooth and can aid with weight maintenance.

Though most of us enjoy the taste, most of us don’t consume nearly as much fruit as we should. According to the CDC’s Morbidity and Mortality Weekly Report (MMWR), only one in ten adults gets enough servings of fruits or vegetables.

Not eating the daily recommended amount of fruits and vegetables puts you at risk for all kinds of health issues. Plus, you’re missing out on the essential vitamins, minerals, and fiber that your body needs.

Including at least one fruit per day in your diet may seem boring or repetitive, but rest assured, it’s the total opposite. If you’ve grown weary of the usual offerings in the supermarket, consider trying some of the many exotic fruits available, some of which you may never even heard of. 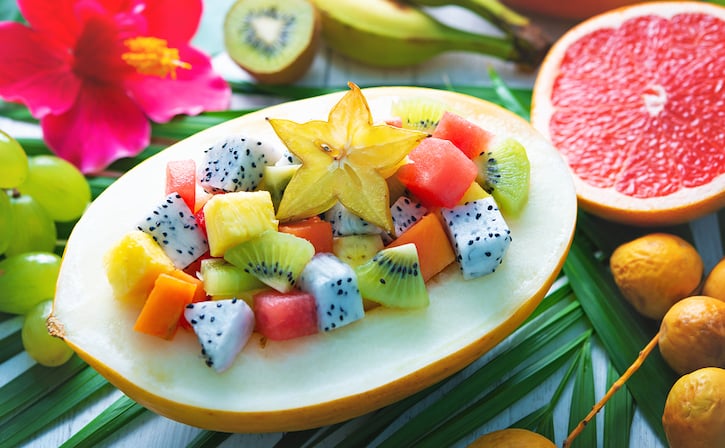 There are hundreds of varieties of tropical and exotic fruit that are rarely seen in North American markets. The following is just a small sampling. 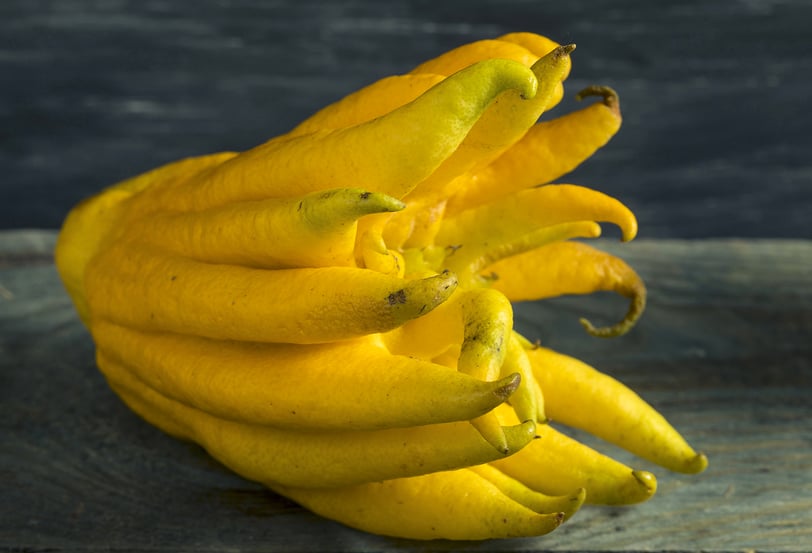 This unusually shaped yellow citron fruit has segments shaped like fingers that resemble those of a Buddha representation. Although the exact history behind this strange fruit is unclear, historians believe it was brought to China from northeastern India as a result of traveling Buddhist monks.

Buddha’s hand is mainly used in recipes for its lemony zest and peel, as most varieties of the fruit do not contain any fruit or pulp to consume. All you have to do is break off a “finger” and grate it over your favorite dishes, or incorporate it into muffins and salad dressings. It’s even possible to make hard candy with the zest.

If you don’t feel like putting your chef’s hat on, but still want to enjoy its beautiful floral aroma, you can set the fruit on your counter or as a decorative ornament in a room and enjoy the lemon and lavender scent for up to two weeks. 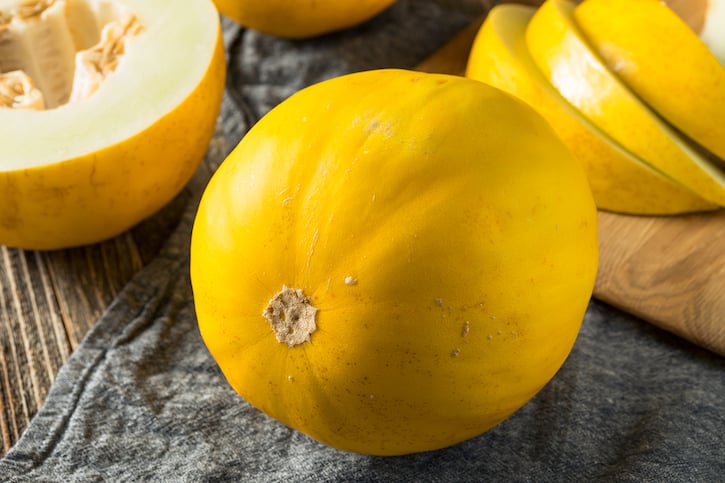 Canary melon, also known as the winter melon or San Juan canary melon, is a large, elongated, melon with pale inner flesh. Despite having a name suggesting the Canary Islands, this melon actually gets its name for its bright yellow color. It’s thought to be of Persian descent, but these days it’s common in several parts of Asia, including Japan and South Korea.

Canary melon has a distinctive sweet flavor that’s slightly tangier than honeydew, but is just as delicious. You can slice the melon and eat it as is or add it to fruit platters, salads, smoothies, and cocktails. 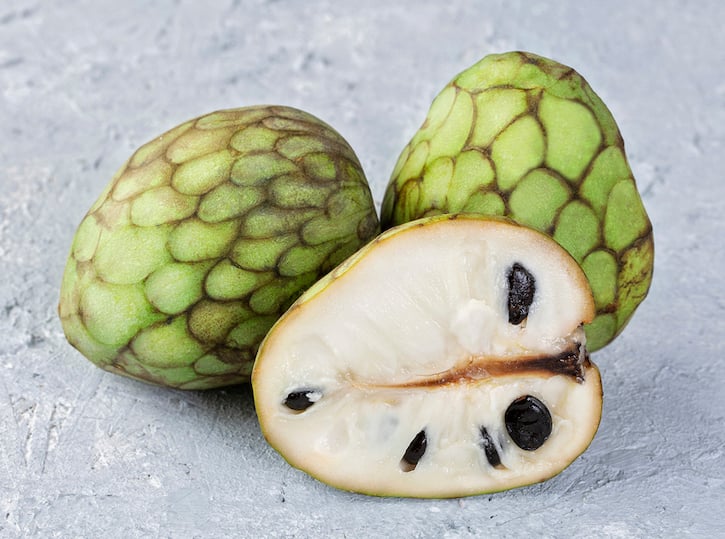 Cherimoya is a large green, heart-shaped compound fruit that can grow anywhere from ten to twenty centimeters long. It grows on the cherimoya tree, a fruit-producing tree native to Colombia, Ecuador, and Bolivia.

The fruit’s skin has a strange appearance, similar to overlapping scales or knobby warts. As if cherimoya’s exterior isn’t scary enough, consumers must be cautious with its toxic seeds. Fortunately, the large, dark brown seeds are large and rock hard, making them easy to avoid, and your teeth will let you know if you’ve encountered one!

The fruit’s taste is a sweet contrast to its intimidating characteristics. When ripe, the flesh is creamy white and has a taste that some describe as a blend of pineapple, banana, papaya, peach, and strawberry.

Mark Twain loved the taste so much that he referred to it as “the most delicious fruit known to men.” Most choose to indulge in cherimoya by chilling and eating it with a spoon, earning it the nickname “the ice cream fruit.” Find out more in this site’s Guide to Cherimoya. 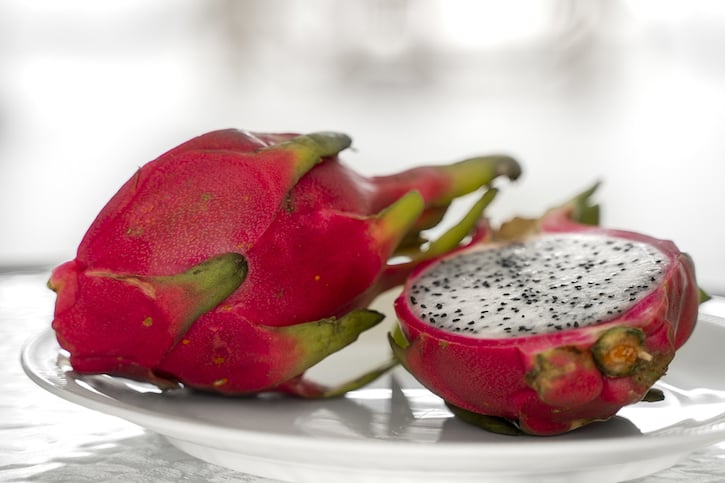 Dragon fruit, also known as pitaya, is a stunningly sweet, creamy fruit that is a type of cactus of the genus Hylocereus, in which there are only about twenty different species.

The fruit is native to warm-weather regions, such as Mexico, Guatemala, Nicaragua, Costa Rica, El Salvador, and northern South America. Now, it’s grown all over the world and is especially popular in Southeast Asian and Latin American countries.

Dragon fruit gets its name from its vibrant skin and scales that resemble a dragon. It comes in yellow and red varieties. Inside you’re likely to see black seeds and white pulp or black seeds with red pulp.

The flavor of the various colors of dragon fruit is similar, and can be described as a slightly sweet cross between a pear and kiwi. Enjoy the fruit in smoothies, desserts, or simply on its own. 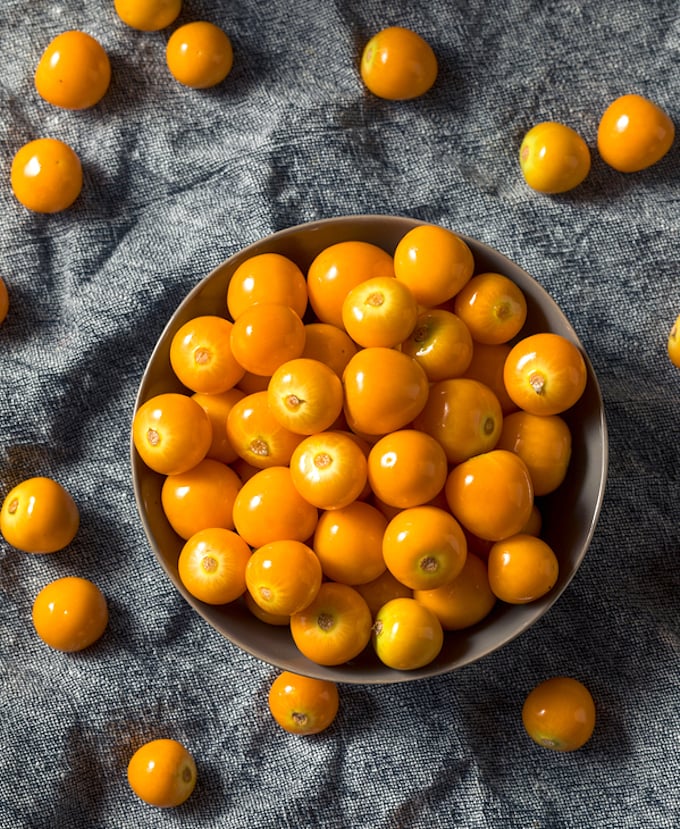 The gooseberry is grown on a small spiny bush that produces bell-shaped flowers and green, orange, or  red berries. Native to Europe, northern America, and the Caucasus, gooseberries have started to gain popularity in the United States and have even started to grow in scattered areas across North America.

Ripe gooseberries are reddish-purple and have a sweet taste that’s perfect for jams or berry sauce. Unripe berries are green and are more tangy and sour, making them ideal for desserts such as pies and fruit tarts. Somewhere in the middle are orange gooseberries.

If you’re looking to add more fiber to your diet, this is the fruit for you. 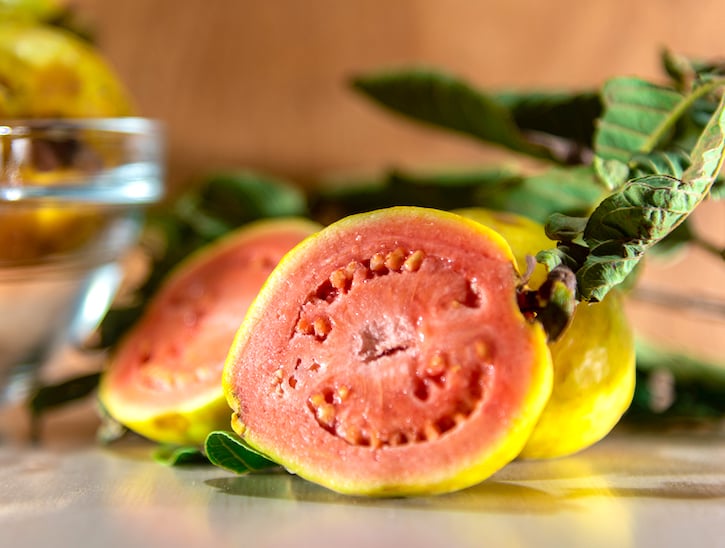 This tropical fruit is oval-shaped with light green skin, beautiful vibrant pink flesh, and edible seeds. It’s native to Mexico, the Caribbean, South America, and Central America, but can now be found in warm-climate countries, including some parts of the United States.

Currently, India is the biggest producer of guava, responsible for some 40 percent of the world’s total.

Guava has a dense texture and strong flavor that can be described as a cross between strawberry, pear, and grapefruit. You can simply slice and eat it as is, or you can add it to sauces, pastries, drinks, or jams.

In addition to its delicious taste, the fruit can also act as a great thirst quencher and has even been deemed a super-fruit for its numerous health benefits. 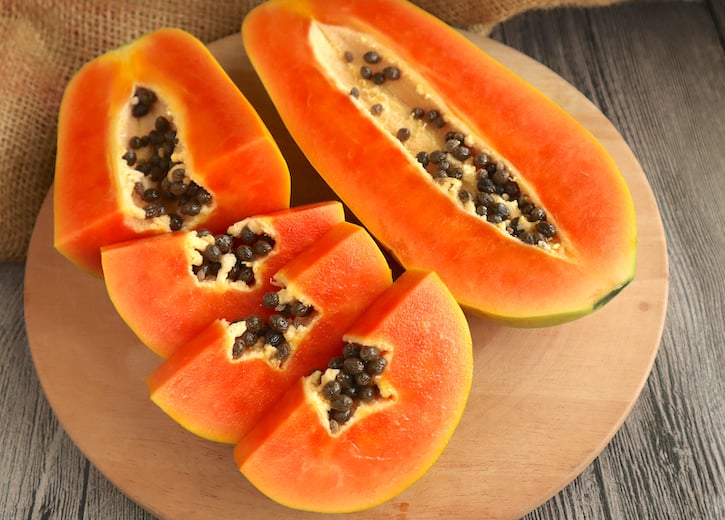 Papaya is a large, amber-color berry that can grow anywhere from fifteen to forty-five centimeters long. It’s native to Mexico and northern South America, but has now become naturalized across multiple tropical and subtropical regions throughout the world.

Papaya is special for many reasons, one being that it contains an enzyme called papain which has been used for thousands of years to aid with digestion. You’ll know when the papaya is ready to eat when it’s plump and has a yellowish-orange color. That’s when it’s at its sweetest, with a flavor similar to melon.

Enjoy papaya in shakes, fruit salads, or simply cut up. If you’re interested in trying unripe papaya, cook it before eating, as the unripe fruit is high in naturally occurring latex, which isn’t ideal for consumption. See more in our guide to papaya. 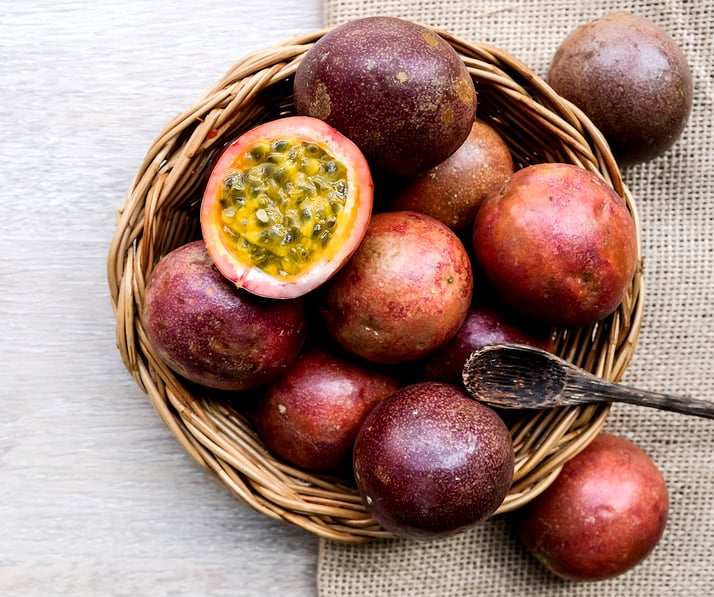 Passion fruit is grown on a tropical vine called the Passiflora. The fruit only grows in warm climates, such as South America, Australia, South Africa, and India, so if you find yourself traveling to any of these locations, make sure to keep an eye out for it.

This fruit has a hard purple skin and soft golden-color pulp with lots of seeds. You can cut it in half and use a spoon to scoop out the pulp and seeds, but many people prefer to pair the fruit with something sweet or creamy, as the taste of passion fruit can be somewhat overwhelming.

Although it’s rich in Vitamin C and helps boost immunity, one thing to note about passion fruit is to avoid eating the skin, as consuming a large amount can potentially be toxic. 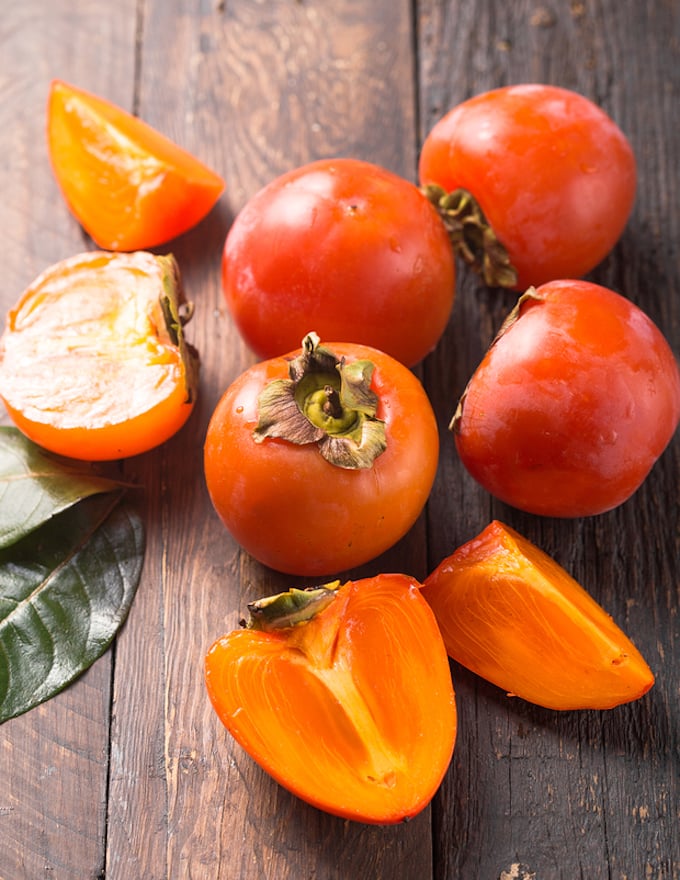 The persimmon is a vibrant orange acorn-shaped fruit that typically grows in cooler climates. It’s native to China, where it was cultivated for many centuries. Over time, it spread to Japan and Korea before it was introduced to California in the mid-1800s.

Today, there are many varieties of persimmon grown on several continents, Diospyros kaki being the most widely cultivated.

At its best, a persimmon has a sweet, mild, and rich taste that’s sometimes compared to honey. It has an apricot-like texture and slightly tougher skin than an apple. It can be used in baked goods, but f you prefer a simpler way to enjoy the fruit, you can just slice and eat it as is. Here’s more in our guide to persimmon. 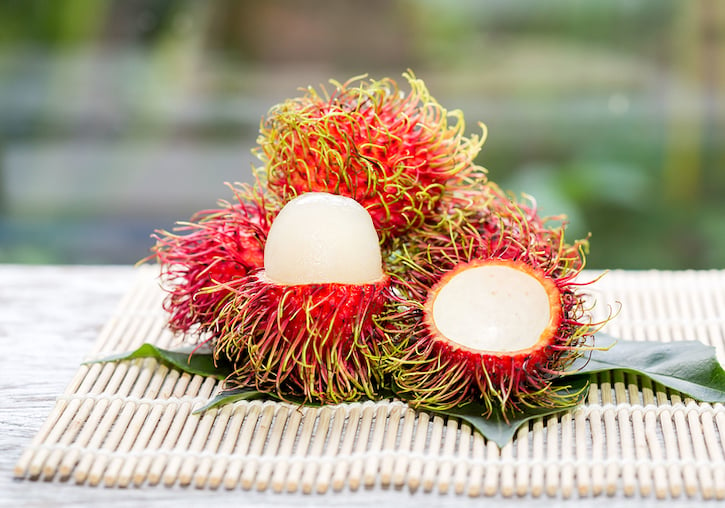 Rambutan, meaning “hair” in Malayan, is a fruit native to Southeast Asia. It earned its name for its hair-like green spikes on its red skin.

When the skin is peeled, rambutan has delicious white flesh with a single seed in the middle, similar to a lychee. The flavor can be compared to grapes, just slightly more acidic, sweet, and packed with iron.

A rambutan fruit is approximately the size of a golf ball, making it a great, though somewhat weird, grab-and-go snack. Just grab a knife to cut the outer skin and squeeze gently until the milky white center pops out. 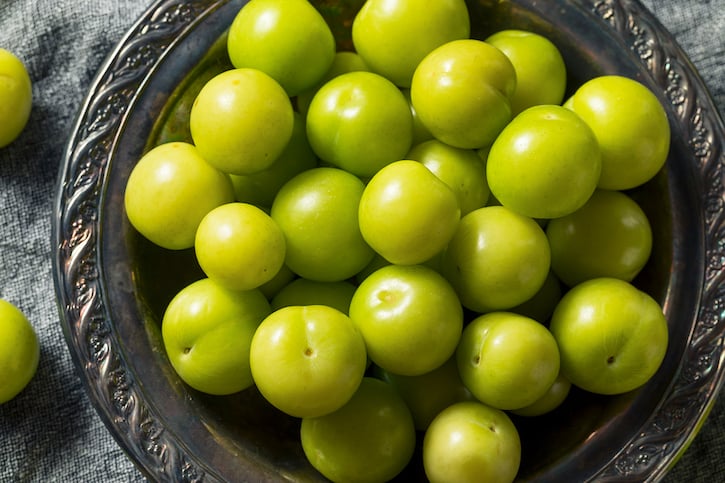 People usually steer clear of unripe fruits, but this is one you won’t want to miss out on. Sour plums, also known as cherry plums or janerik, are cherry-sized green plums considered a delicacy. They’re most commonly grown and enjoyed in the Middle East and Asia.

Sour plums are crunchy and have, not surprisingly, a very sour or bitter flavor. That is as a result of being harvested before they have a chance to fully ripen into the purple plums we’re familiar with.

As a result of its strong sour taste, most people prefer to eat the fruit with a dash of salt, preserved, or pickled. 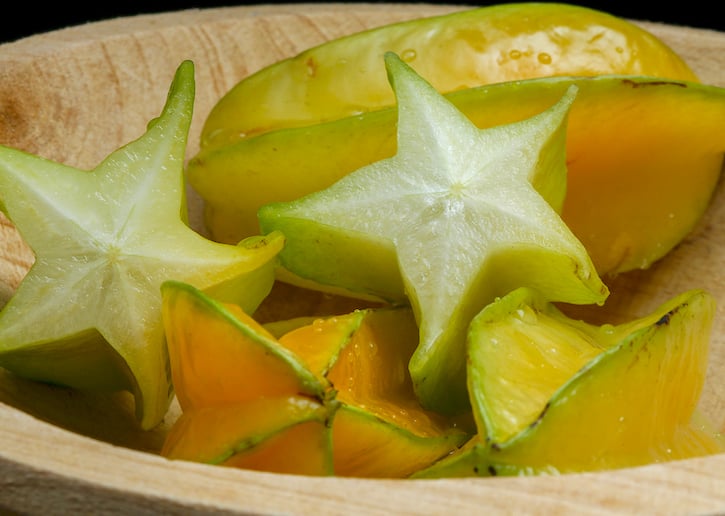 Star fruit, or carambola, is a beautiful golden-yellow tropical Asian fruit. It has a unique five-point shape that resembles a star when sliced in cross-section, hence its name. The fruit is native to Sri Lanka and Moluccas (known as Indonesia’s Spice Islands) and is now also grown in Florida, Hawaii, Southeast Asia, and Malaysia.

Star fruit has a waxy edible skin and grape-like firm flesh with subtle sweet and sour undertones. You can enjoy this fruit in many ways — slicing and eating it just as is; bake it into star fruit chips; or add it to fruit salad for an exotic accent.

Those suffering from kidney problems should beware of the fruit as it contains a neurotoxin capable of having adverse effects on the body’s brain and nerves, known as star fruit poisoning.

Want more exotic fruits? Here are others to explore.