Here’s how to create a beautiful vegan Passover Seder plate with easy replacements for two of the components. Central to the Passover observation is the Seder plate, a round dish with designated spots for the symbolic foods to be sampled during the reading of the Haggadah. 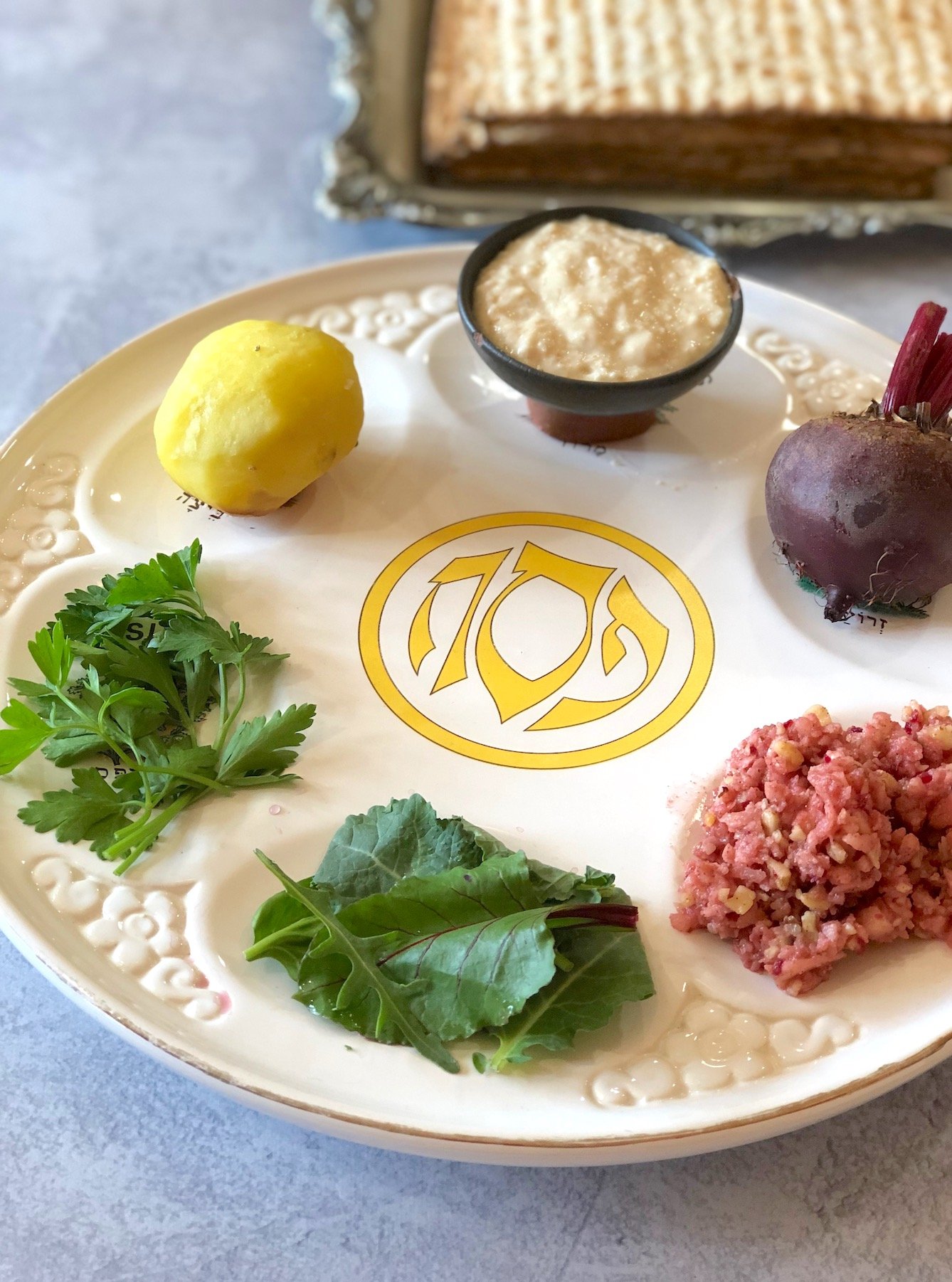 So exactly what isn’t vegan? In the traditional Seder plate, there’s baytzah, or egg, and also zoreah, or shank bone. Quite honestly, I’ve been to many a Passover seder (actually most of them), at which the latter hasn’t been used at all.

Those who celebrate the holiday most strictly have three covered matzos (or matzah, as it’s sometimes spelled) on the table near the Passover plate, but in more casual celebrations, there’s a platter of stacked matzos, and these are replenished as needed.

The matzos, or unleavened bread, of course, represent the food that the Israelites took with them during the Exodus.

There are often slight variations in the interpretations of the symbolic foods on the Seder plate. Here are a few:

Following, we’ll find out what’s on the plate, and address the two components that need to be replaced for the vegans at the table.

Here are the four components that everyone can partake of:

Karpas: A mild green herb, such as parsley. This symbolizes the new growth of spring. As part of the Sephardic Passover plate, a small leaf of romaine lettuce or other mild green might be used. It’s sometimes dipped into salt water as a reminder of the tears shed by enslaved Jews.

Maror: A bitter herb, usually horseradish for Ashkenazic Jews or a bitter green such as escarole or endive for Sephardic jews. This represents the bitterness of slavery suffered by the Jews in Egypt.

Hazeret: Another green, either slightly bitter, like chicory, or mild, like lettuce. Some traditions hold that two bitter herbs should be tasted. This particular platter designates a spot for lettuce, so I split the difference with some slightly peppery greens.

Haroset: A mixture of nuts, wine, and apples (as Ashkenazic Jews make it), or nuts, wine, and dried fruits (in the Sephardic tradition), this sweet mixture has color symbolizing the bricks used by the Jewish slaves to build Pharaoh’s cities. 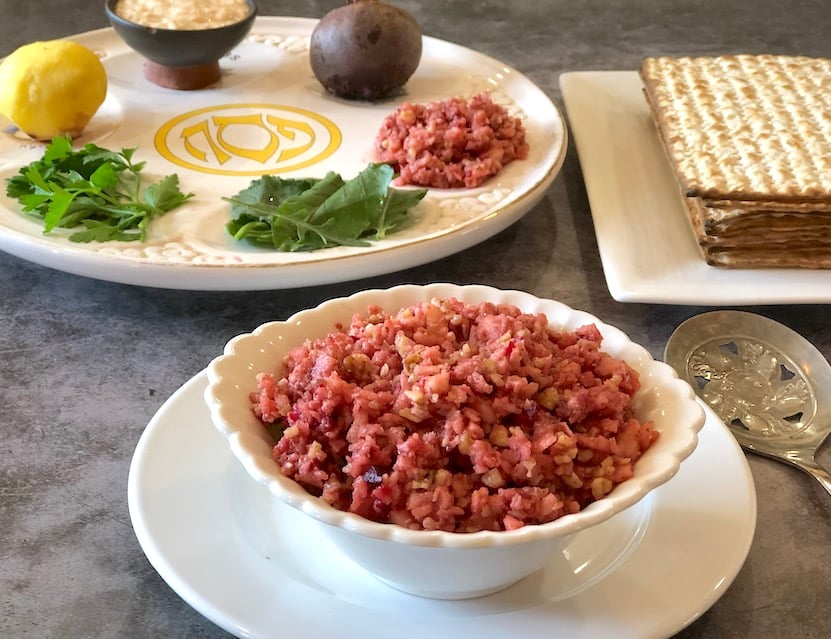 Our recipe for Haroset

Vegetarians might choose to retain the egg, but the two components of the Seder plate that vegans will replace are:

Zoreah: The shank bone represents the paschal lamb whose blood was said to be on the doorsteps of the homes of the Israelites on the eve of the Exodus. As I mentioned earlier, I can’t recall a single Seder I’ve ever attended that used this item, so replacing it doesn’t stray much from tradition.

To fill its spot in the vegan Passover plate, it can be replaced with small whole beet, or chunks of roasted beet.

Beytzah: A hard-boiled egg, sometimes roasted. The egg’s symbolism shifts depending on the source. It is sometimes said to symbolize the eternal mourning for the loss of the Holy Temple.

In other interpretations, it’s said to symbolize the sacrificial offerings performed in the days of the Second Temple. And for yet others, it’s the usual symbol for spring and renewal. For tasting, chopped eggs are combined with salt water, representing tears.

A cooked potato, more for its shape than any symbolic similarity, can be used to replace the egg on the seder plate. Similarly, chopped cooked potatoes can be served in a little salt water for tasting. A more contemporary swap is a whole small orange, though you wouldn’t want to dip that in salt water! 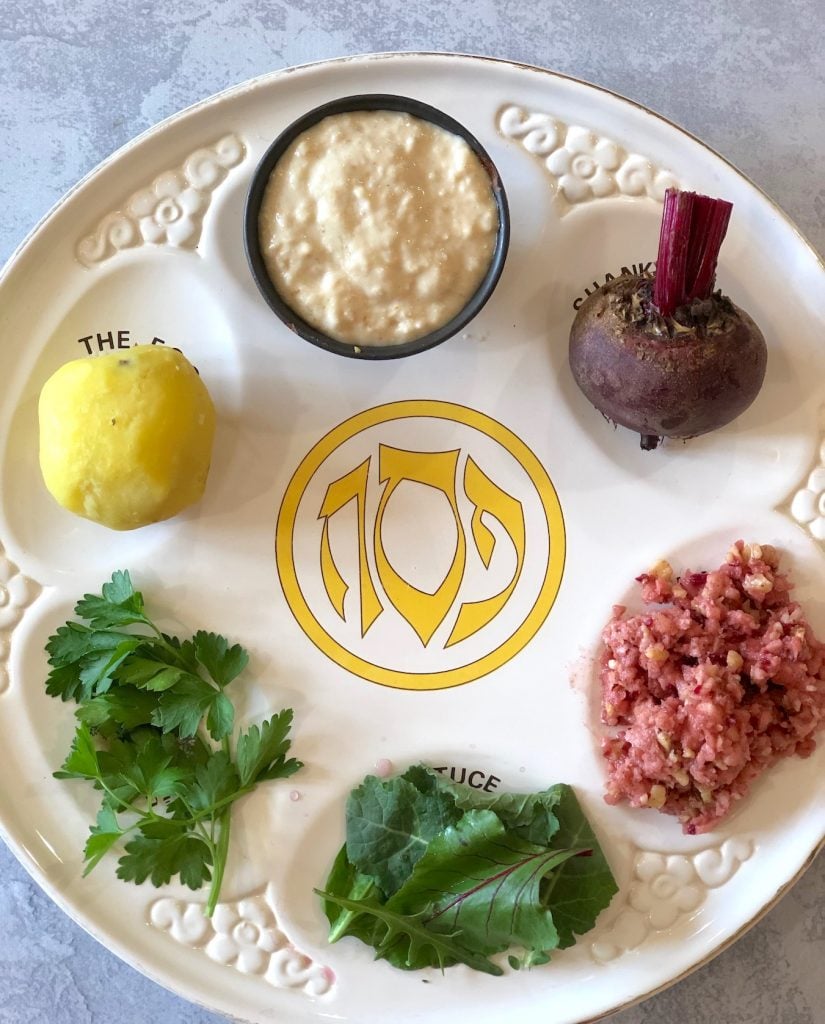