Prague’s cobblestone streets twist and turn in on themselves, wrecking your boot heels and sense of direction. Its castles, churches and towers reach high above the city, their spires glittering in the sun.

Walking across the Charles Bridge, the Gothic pedestrian bridge from Malá Strana (Lesser Town) to Staré Mêsto (Old Town), it feels as if time has stopped since Charles IV commissioned the bridge in 1357.

My roots are Czech-ish, with paternal ancestors coming from Moravia, Bohemia and other parts of the Austro-Hungarian empire that no longer exist.

“We don’t like vegetables,” my Czech driver told me on our drive from the airport in to Malá Strana. “We like meat, beer, and dumplings.”

Limited options on a tour

I did not eat meat, beer, or dumplings on my group’s food tour the following day, though there was plenty on offer. We met at a gingerbread shop, where, amidst the aroma of warm, sweet spice, Petra, our Eating Prague guide, explained Czech gingerbread was traditionally made with just three ingredients, flour, honey and black pepper.

I asked if that made it a relation to Polish pierniczi. Perhaps, she said, but the Czech did it first. Czech pride, along with the meat, beer and dumplings, would be an afternoon motif. 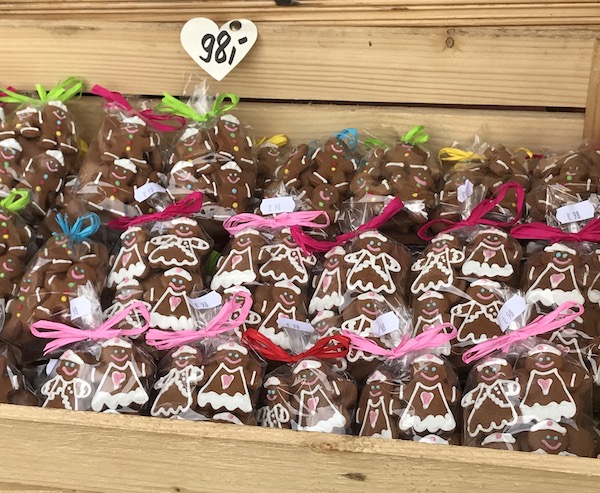 Gingerbread is beloved here all year long, but especially at Christmas. The traditional Czech Christmas dinner is carp and sauerkraut. Cookies are welcome. I passed on the the butter-and-egg-rich gingerbread, but I had a good time.

Food is culture, and one of my favorite ways to learn about people and place. Petra was engaging and informative … and slightly bewildered by the whole vegan business.

I enjoyed the whole sunny February afternoon. Unlike the other participants, though, I was open to the idea of dinner, having also passed on the chlebíčky, or open-faced sandwiches piled high with meat, the Old Bohemian soup made with sauerkraut, mushrooms, pork and sour cream, the beer, the duck and dumplings, svičková (braised beef in a sweet sauce with more dumplings), and strudel. 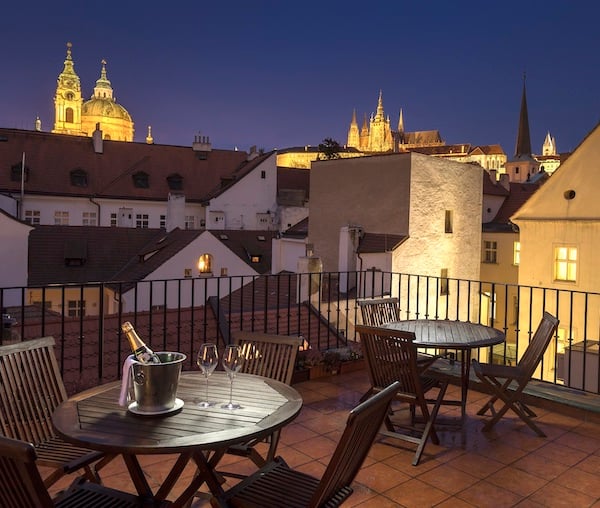 A big shout-out goes to Pod Vêží, our Prague hotel, right at the base of the Charles Bridge (its name means under the bridge). Minutes from Prague Castle and the Kafka Museum, it’s smaller (28 rooms), older and very comfortable, it defines old-world charm. The hotel’s adjacent restaurant, with cozy vibe and vaulted ceilings, serves some of the best traditional Czech food in Prague.

After a moment of panic our first night at having to deal with a vegan, the kitchen recovered and cobbled together a very fine salad with fresh lamb’s lettuce, tender pumpkin and crunchy pumpkin seeds.

The chef more than rose to the occasion after that. He prepared a vegan tomato and asparagus risotto for me that presaged spring the next night and made a luscious mushroom risotto my last night — a knockout of a sendoff.

Mushrooms, dumplings, and more
The Czech love their mushrooms, and that much of my Czech-ered ancestry lives on in me. Czech joke: All mushrooms are edible. Once.

The vegetable you’re most likely to encounter, though, is cabbage by way of sauerkraut, which, after all, is fermented and fabulous for your microbiome and probably helps balance your pH levels after all the meat, beer and dumplings.

Czech dumplings, called knedlicky, are basically yeasted white bread dough. After the dough rises, you shape it into an oblong loaf, but instead of baking it, you boil it. Slices of dumpling loaf, bland, almost tasteless by themselves, serve to sop up sauce and fill out a meal (and your stomach).

All useful information, but other than vegan risotto and salad, what does a vegan eat in Prague? And where? The good news is the city has a burgeoning vegetarian and vegan community. Soy milk can be found in all the cafés and restaurants, but vegan lattes can only take a girl so far. 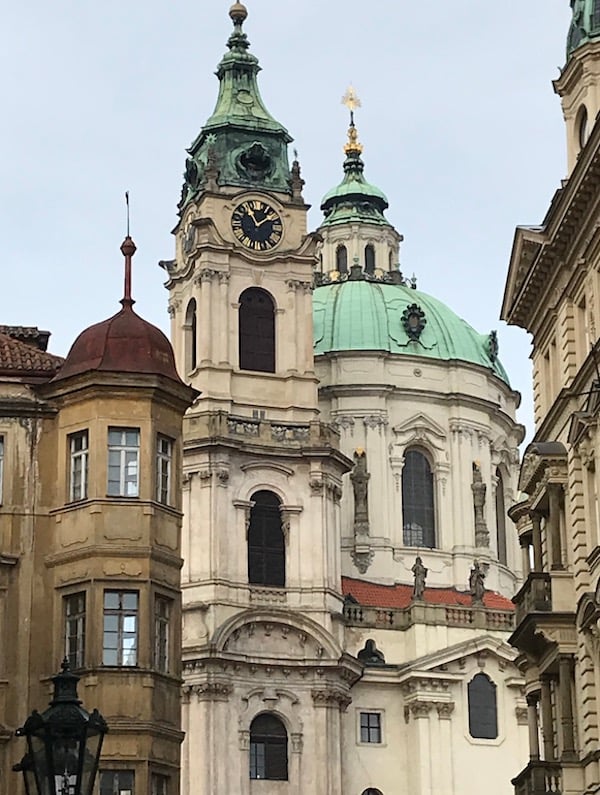 Randi of Veggie Visa has done much the guesswork and legwork for visiting vegans, reviewing Prague’s numerous vegetarian restaurants, even identifying where to shop for groceries, personal care products and clothing.

Also useful — she supplies the Czech words for those items. Czech has no cognates or crossover to any other language I’ve heard, and the words are well-seasoned with diacritical marks. Nutritional yeast is lahůdkové droždílook. Don’t stress. English is spoken almost everywhere.

Many of the restaurants Randi recommends are in neighborhoods outside tourist range and I didn’t have time to travel far afield during my brief stay. However, I lunched at two places within Staré Mêsto, just a street apart, one she recommended and one I stumbled upon. 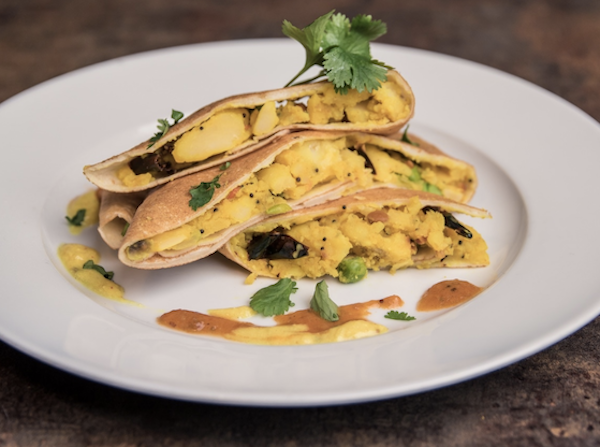 Prague is pint-sized, and quite walkable, but its streets are weblike rather than laid out in a grid. Many old homes (and almost everything is old in Old Town) don’t have numbers at all, but names — Stone Bell, Stork House, House of Three Ostriches, House of the Black Madonna — with original freizes or paintings above the door so you can identify them. It’s charming. Still, hallelujah for Google maps. It helped me find Dhaba Beas.

With eleven locations sprinkled throughout Prague, Dhaba Beas is bare-bones in ambiance, cafeteria-style and pay-by-weight, with metal trays and cups. But your nose will tell you you’re in the right place.

A wide selection of fresh, steaming Indian curries and Asian stir-fries dominate the buffet line. Their welcoming aroma of warming spices carries out the door. So does the line. Locals queue up at this lunch spot well before noon.

Many of the dishes are vegetarian, but there’s a fair amount of vegan options, and they’re clearly marked. I chose a vegan Thai coconut milk curry, some chana masala (Indian spiced chickpea stew), and some rice to soak up both.

There’s samosas, veggie sliders and salads, too, all made fresh daily, with love and respect, as promised.

My Thai curry was creamy, well-seasoned and full of tofu and broccoli which maintained both color and crunch. The chana was mellow and tomatoey with just the right amount of chili to warm my mouth and spirits.

The meal was ample, satisfying and astonishingly affordable, coming to 100 Cz krona — or under $5. No wonder Dhaba Beas is a local favorite. Dhaba Beas has various locations, which you’ll find here. 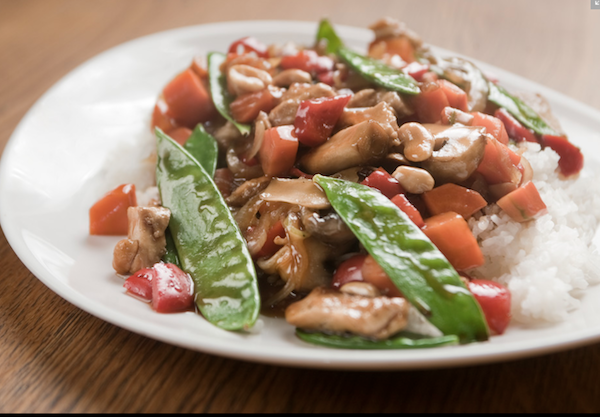 My last free day, after visiting the Joseofov, Prague’s historic Jewish quarter, and museum of Alphonse Mucha, the Czech art nouveau master who defined much of the city’s look at the turn of the 20th century, I found my way to Maitrea. Maitrea is a Buddhist term for loving kindness, and you feel it as soon as you open the door.

There’s warm lighting, elegant feng-shui design and, best of all for me, dogs. Such well-behaved dogs, too, resting calmly at their human companions’ feet, enduring my overtures, but mostly waiting for their accompanying humans to eat and be on their way. Maitrea attracts locals looking to enjoy a nicer lunch (Maitrea is open for dinner, as well).

Whereas Dhaba Beas is distinctly, deliciously Indian and Thai in influence, Maitrea reflects true Czech cuisine. Dishes are spare of spice, with mild, often sweet flavors (even in savory dishes) and soft, creamy textures. My husband, used to the hummus I make at home, asked where the lemon and garlic was.

As with Dhaba Beas, most items are vegetarian but more than a few are vegan and are clearly labeled as such. My husband and I shared two starters, the hummus and a creamy smoked tofu dip — the tofoie, a clever vegan take on duck liver pâté, both served with slices of great, grainy Czech bread. That and the soup, split pea with coconut milk pureed till velvety, was enough for me.

Vegan mains include Thai eggplant with tofu and coconut and a spicy Asian stir-fry of seitan and vegetables. Maitrea also serves smoothies, juices, teas and lattes galore. The loving kindness goes far beyond the kitchen. Maitrea has space next door for healing seminars and workshops and operates a kindergarten.

Lunch came to about $12 a person, more than Dhaba Beas but a steal in the States. Maitrea is located at 1064/6 Tynská ulička. You can see a gallery of the lovely interior and some of their dishes here.

I’d have liked the chance to try Maitrea’s sister restaurant, Lehká Hlava — Czech for clear head, situated right by the river. However, our last evening, our group had dinner at Prague’s Municipal Building.

Far from its drab, institutional-sounding-name, the Municipal Building is an Art Nouveau palace. As anyone with any kind of special diet knows, finding something appropriate to eat at big events can be a challenge.

Saying Jsem vegan — I am vegan — may earn blank, even frosty, stares. A colleague created signage for me, and it worked wonders. Rather than — surprise! — svičková served to everyone else, I got an assortment of sautéed vegetables that pleased me and generated interest and a certain longing among my omnivorous colleagues.

Veggie Visa’s Prague guide shows there’s lots more vegan restaurants in Prague to explore, beyond what I managed during my brief stay, and so much more to experience in Prague, besides. So I’m holding on to my vegan card for my next visit.