Here are some fun and easy ideas for how to use watermelon radish, the root vegetable whose vivid interior adds color and crunch to a variety of dishes. Just a few short years ago, no one in the western culinary world had heard of watermelon radishes, and now they seem to be popping up everywhere. 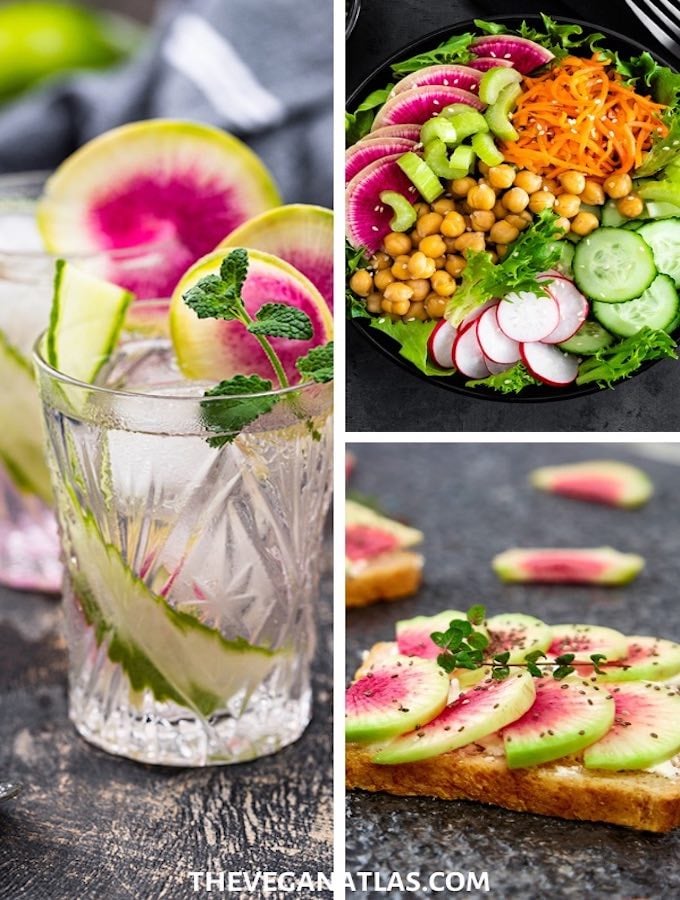 It’s an heirloom daikon radish: Despite their name, these roots have nothing to do with watermelon, but rather, they’re an heirloom variety of daikon radish. With origins in China, where it’s called shinrimei, this blushing root vegetable is a relative of other Brassicas like cabbage and broccoli.

A little bit peppery, a tiny bit sweet, watermelon radishes look pretty unassuming from the outside, with their pale green and white exteriors. But once you cut them open, they reveal their gorgeous pink interior hue. Now you’ll see why it was named for the fruit.

Larger than ordinary radishes, with a circumference much like a good-sized daikon root but round, the flesh should ideally be crisp and a little juicy. 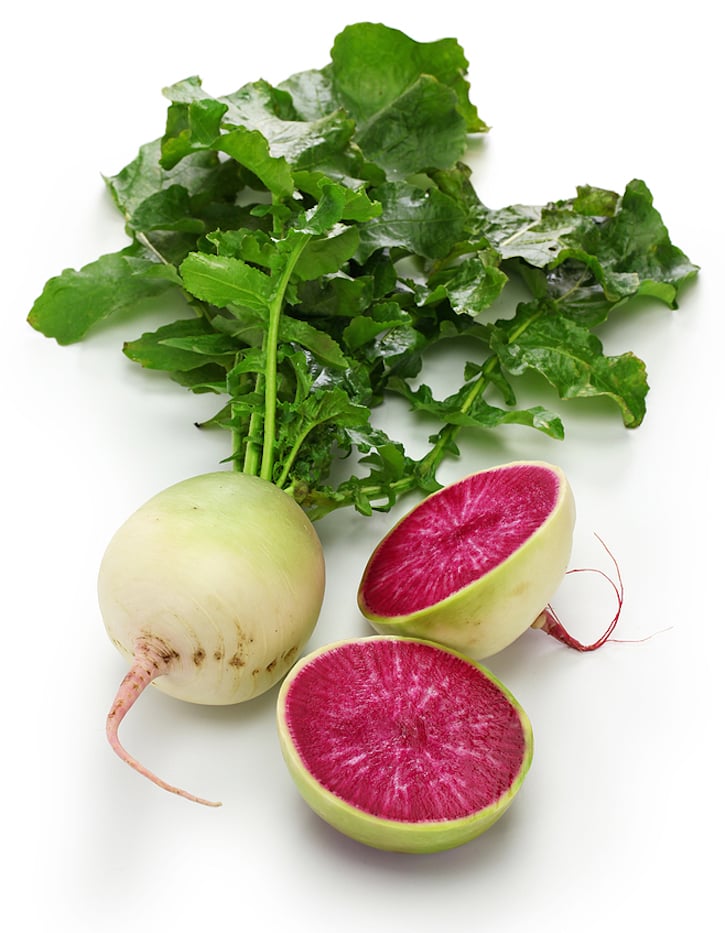 Watermelon radish is in season starting later in the fall and into spring, as they prefer a cooler growing climate. Look for firm, unbruised radishes. But don’t forget, they can look pretty plain on the outside, but always reveal a vivid interior.

Pop them into a plastic container, where they’ll keep well for at least a couple of weeks in the vegetable crisper drawer of your fridge.

Where to buy watermelon radishes: Not long ago, these delightful radishes were a rare find in the U.S.; now many supermarkets and specialty groceries carry them. If you don’t have a local source, Melissa’s Produce is a great resource for watermelon radishes in larger quantities, as well as many other varieties of radishes.

How to use watermelon radish

Though you can use them lightly cooked or sautéed, their vivid color gets washed out and they lose some of the texture and flavor that makes them so appealing.

Best used raw: With a flavor and texture somewhere between daikon radish and jícama, simply slice and use watermelon radishes raw for best results. 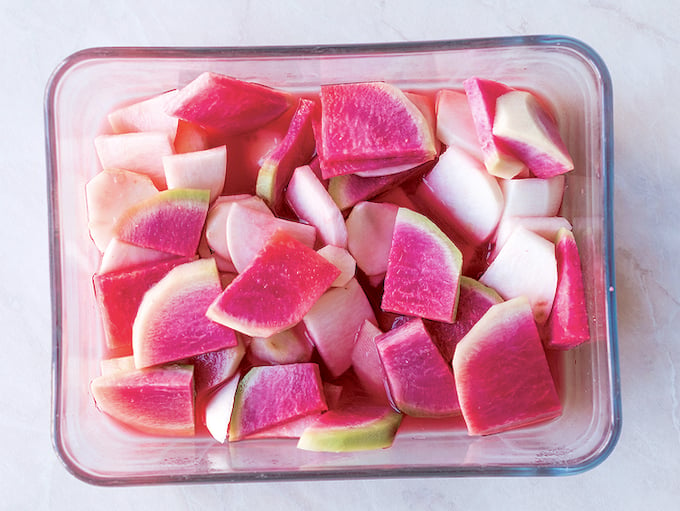 How about the greens? Sometimes watermelon radishes come with their greens, sometimes not. As with all other kinds of radish greens, these are edible. Rinse well to get rid of grit, and give them a taste. If tender, use raw, but if they’re a bit tough, cooking lightly will make them more palatable. Simple use as you would any other greens like spinach, arugula, chard, etc.

Recipes not needed: Generally, there’s no need not follow any specific recipes. Just make sure to wash well (no need to peel) and use in the following ways: 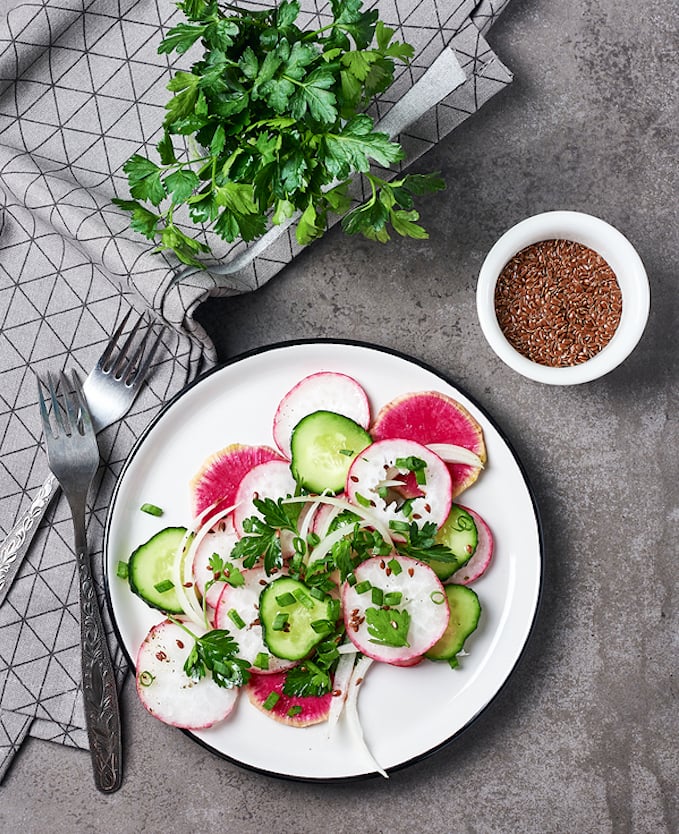 Team with other radishes in simple salads: As part of salads, they’re compatible with other types of radishes, cucumbers, herbs, and onions. 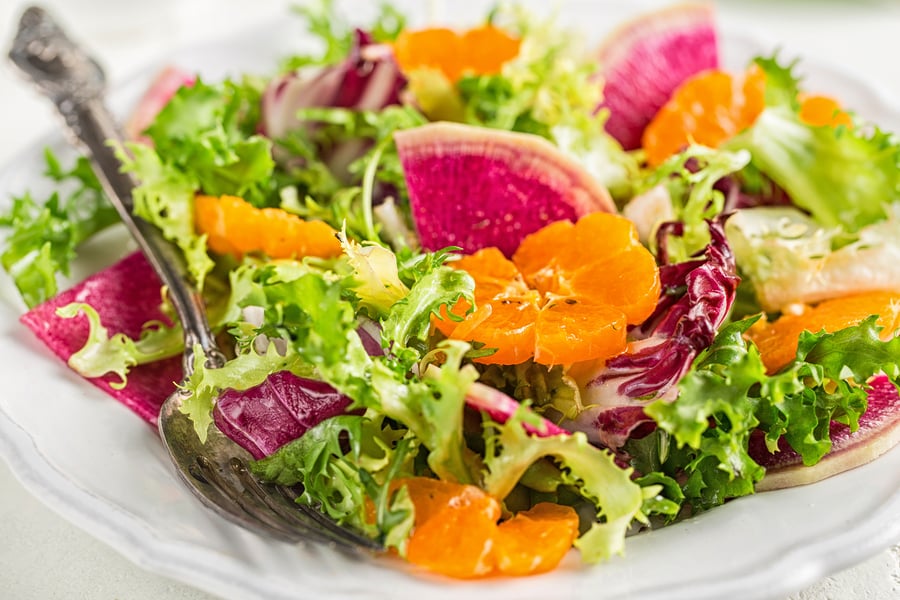 Team with citrus in simple salads: Watermelon radishes go well with citrus and slightly bitter greens in mixed salads. A simple vinaigrette will do. 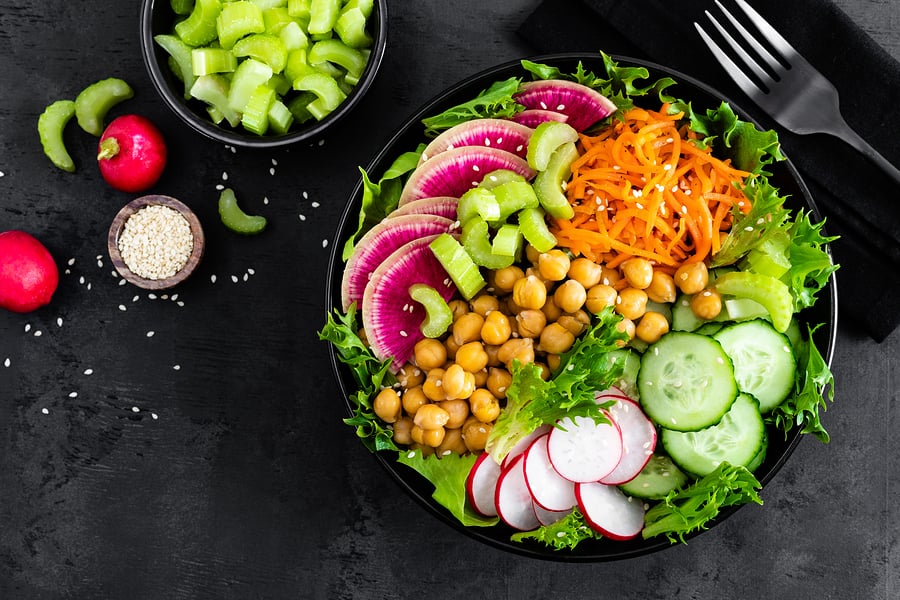 A natural to beautify Buddha salad bowls: Watermelon radishes are a gorgeous addition to Buddha Bowl type salads, where the ingredients are arranged rather than mixed. 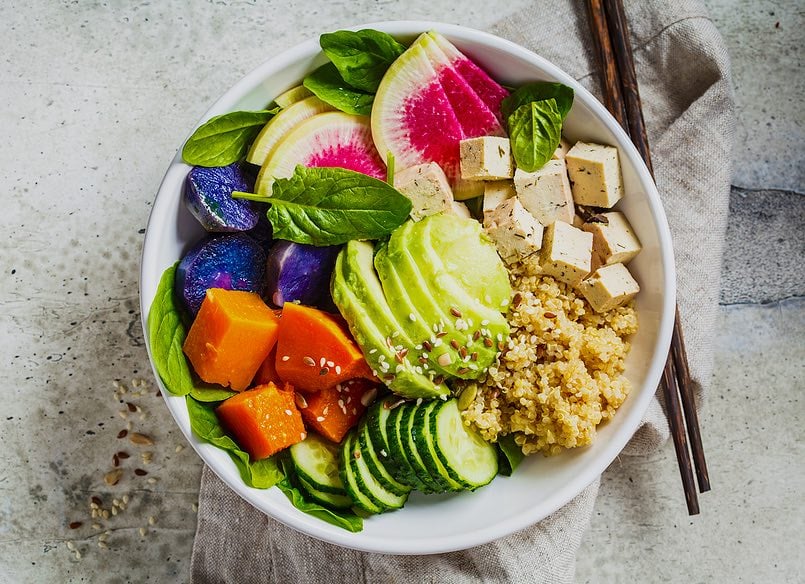 Amped up color in your main dish Buddha bowls: With color as vivid as watermelon radishes have, team them with other vivid veggies like purple potatoes, orange squash or sweet potato, and more … often the more color, them more antioxidants. Incorporate grains and plant protein to make main dish bowls. 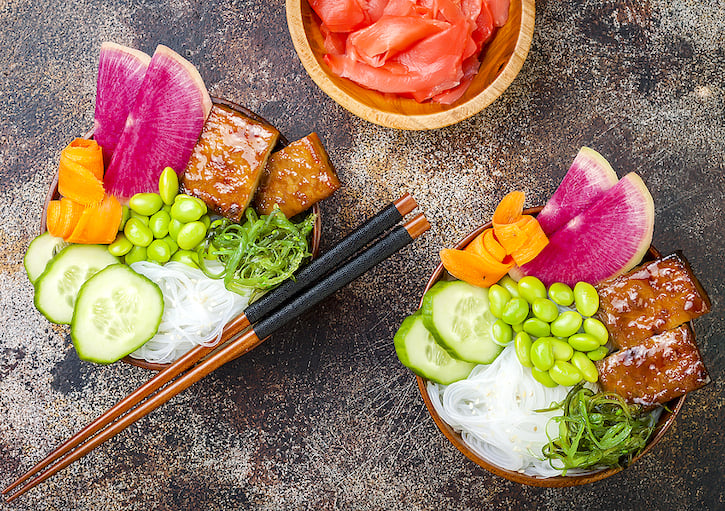 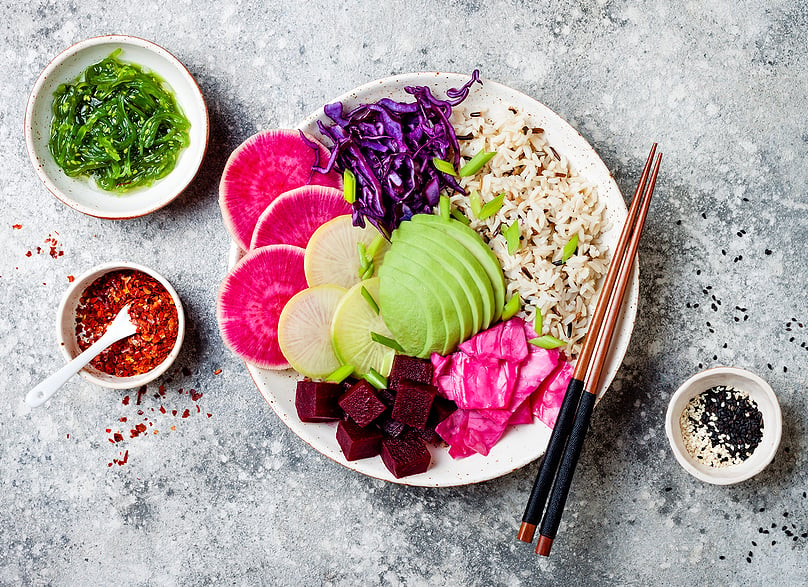 Vegan rice bowls: As part of vegan rice bowls, these colorful radishes add visual interest and great texture. No need to mix or measure, simply arrange your favorite in a large shallow bowl with cooked rice. 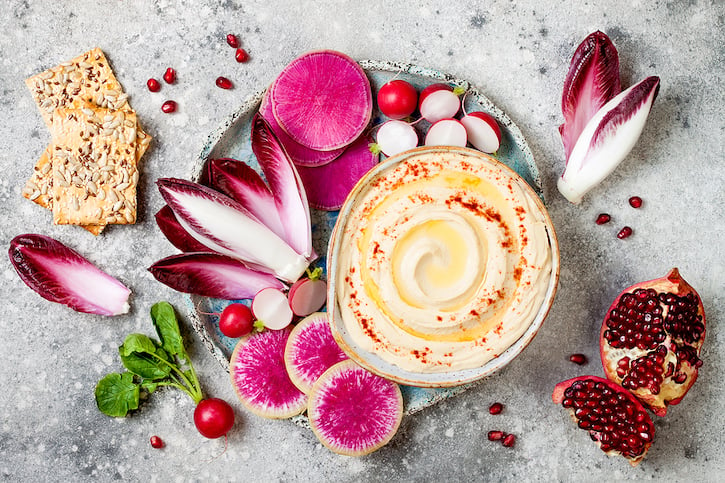 Use to scoop dips: As part of raw vegetable platters, watermelon radish can be used as a scoop for dips (like hummus) instead of or in addition to crackers. 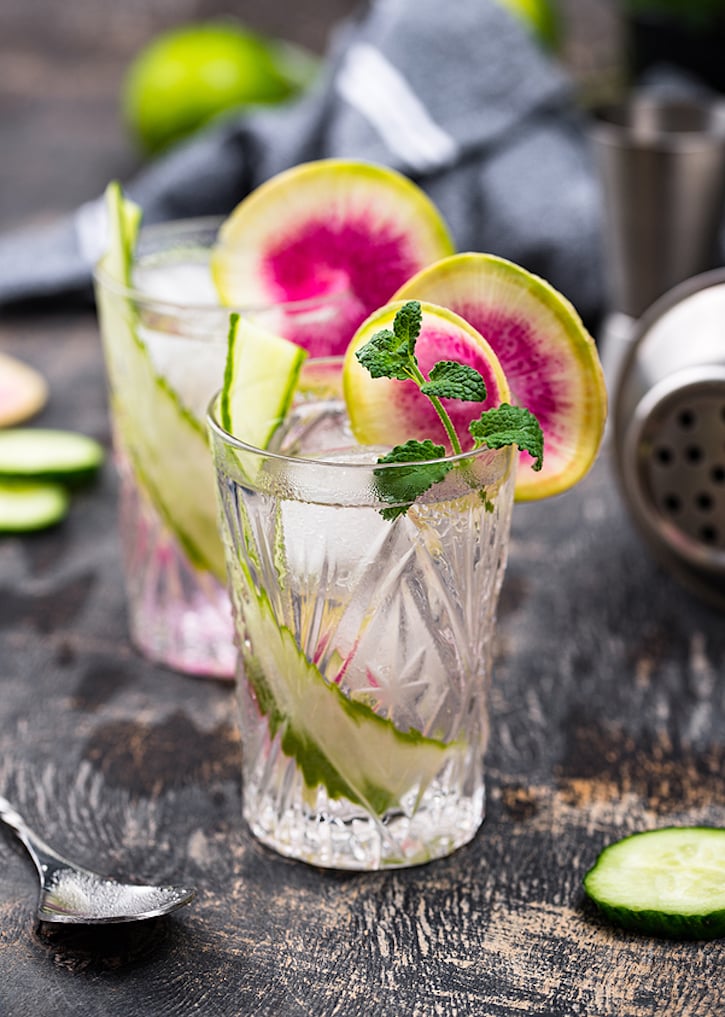 A cocktail garnish: Can you think of a more decorative garnish for beverages (including cocktails)?

Here are more of this site’s food guides.