There’s nothing like a close-up encounter with gentle farm animals to relieve the stress of daily life. Case in point, Clover, an adorable little girl goat, gives and gets a lot of love. But even though you’ll be able to hug and pet many of the animals at Woodstock Farm Sanctuary, don’t conflate it with a petting zoo. WFS tours have a strong educational component. 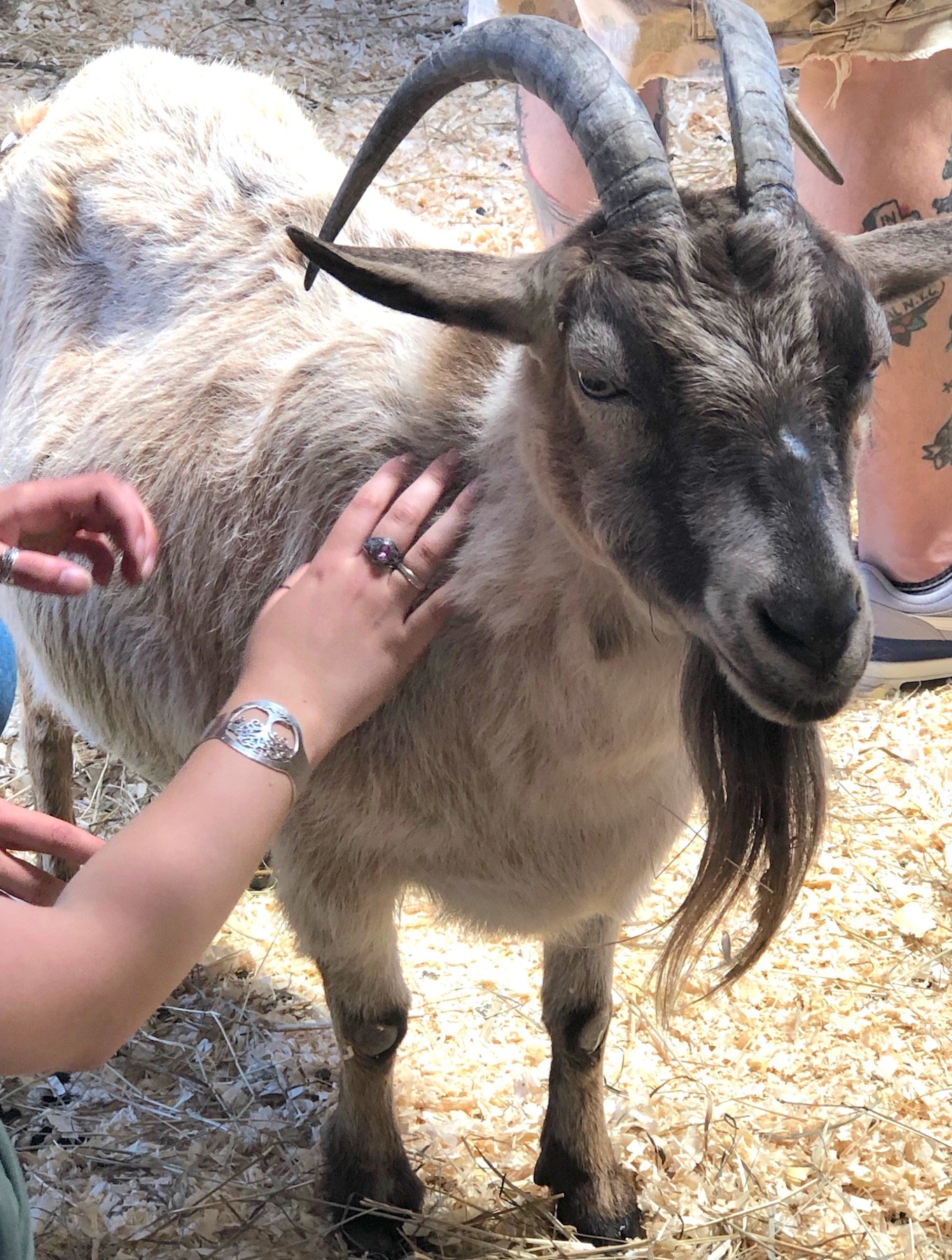 It’s great that there are almost always several kids accompanying their parents on the sanctuary’s weekend tours. Compassion is often a learned trait, and from what I’ve learned, visitors come away with a deeper understanding about how animals are treated under  so-called “normal” circumstances.

Visiting Hours: 10:30am – 4pm, Saturdays and Sundays only, April through October.
Weekend Tour Times: Hourly, starting at 11am; last tour at 2pm
Call or visit the site for the latest visiting information & reservations 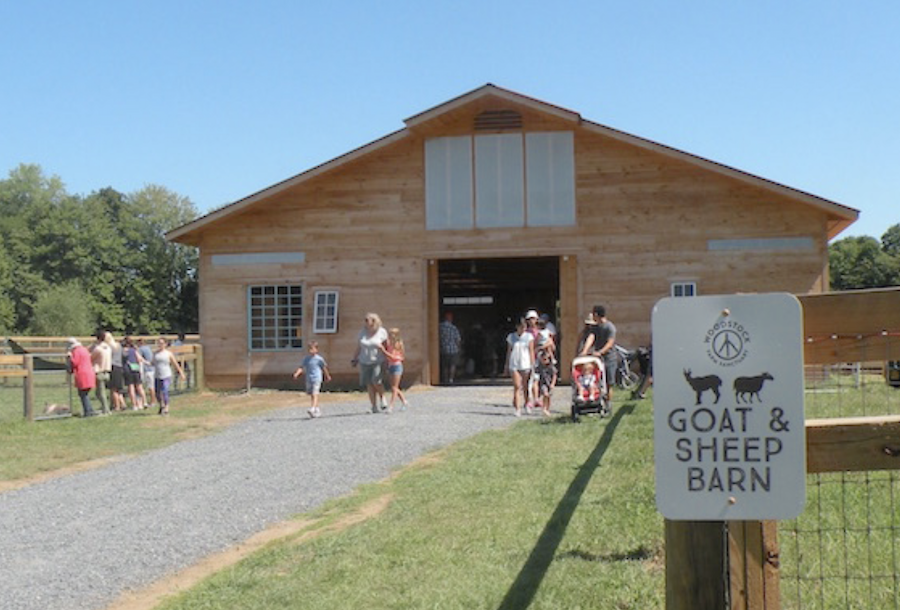 Woodstock Farm Sanctuary had its grand re-opening in 2015

In 2015, Woodstock Farm Sanctuary moved from its original location in Woodstock, NY (hence its name), to High Falls, NY, in 2015. The sanctuary’s beautiful facilities are on 150 acres of pasture land.

As a longtime fan of the sanctuary and its mission, I was delighted when their new home opened just 17 minutes (according to Google Maps!) from where I live. If you want to make a longer stay of it. WFS now has a beautiful Bed and Breakfast (vegan, of course), The Gray Barn, right on site.

The stated mission of Woodstock Farm Sanctuary is “to provide shelter cows, pigs, chickens, turkeys, ducks, sheep, goats, and rabbits who have been rescued from cases of abuse, neglect, and abandonment.” The goal of most farm animal sanctuaries is to get visitors to consider veganism — a way of life that goes further than simply eating a plant-based diet.

Woodstock Farm Animal Sanctuary is all about the animals. Here they’re well cared for and can live their lives out in peaceful surroundings. Visitors get to observe their individual personalities and unique social behaviors of each group of animals. Kids and adults alike love interacting with the animals, and it seems that the feeling is mutual. Let’s meet some of them … 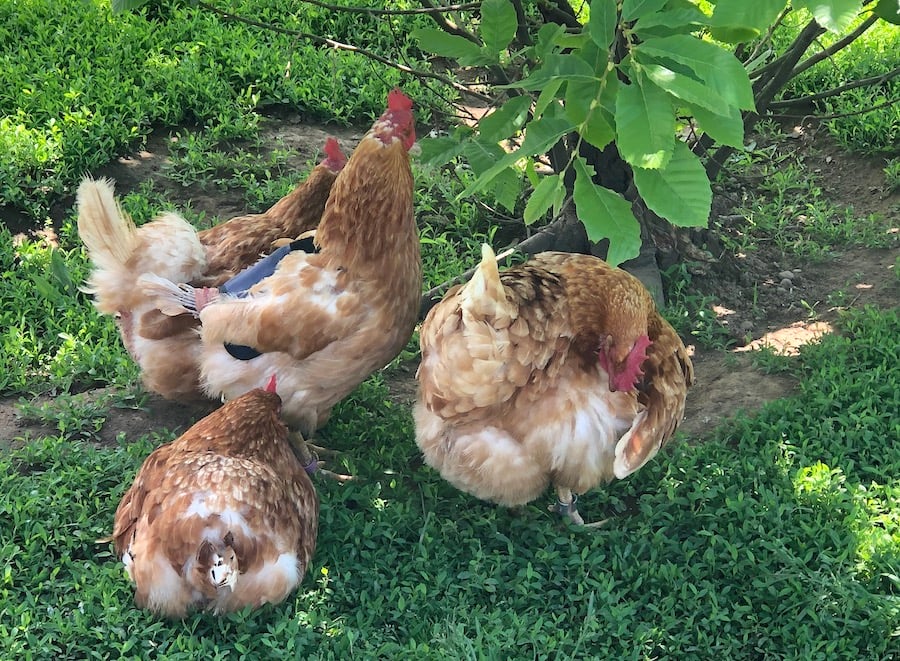 These chickens have literally got it made in the shade. Known collectively as The Philly Girls, these hens were rescued from the egg-laying industry in PhiladelphiaVisitors on the last tour I was on got to feed grapes to the chickens, which were greatly enjoyed. 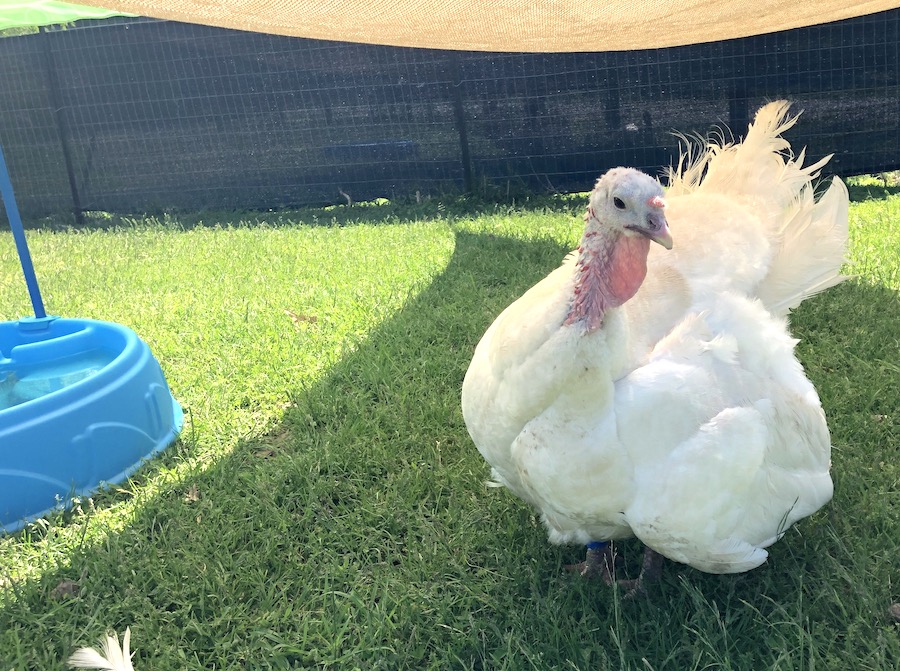 This turkey, a gorgeous girl named Tomoko, is also enjoying some shade, and even has a wading pool nearby to cool off in. 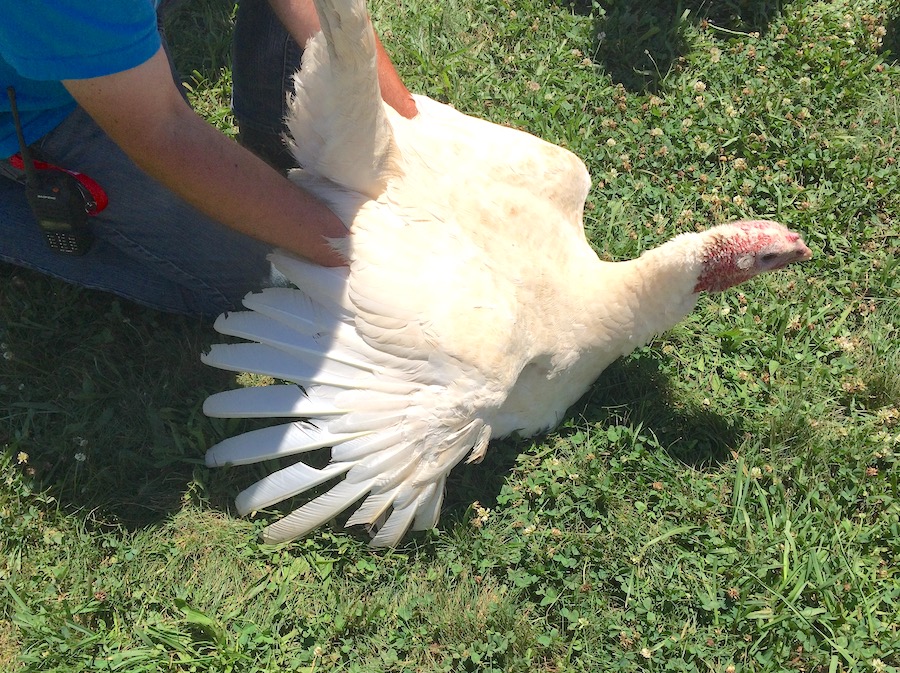 Some turkeys, like Tomoko once again, love to get scratched under their wings. This debeaked turkey would have become someone’s Thanksgiving dinner if it hadn’t been rescued. 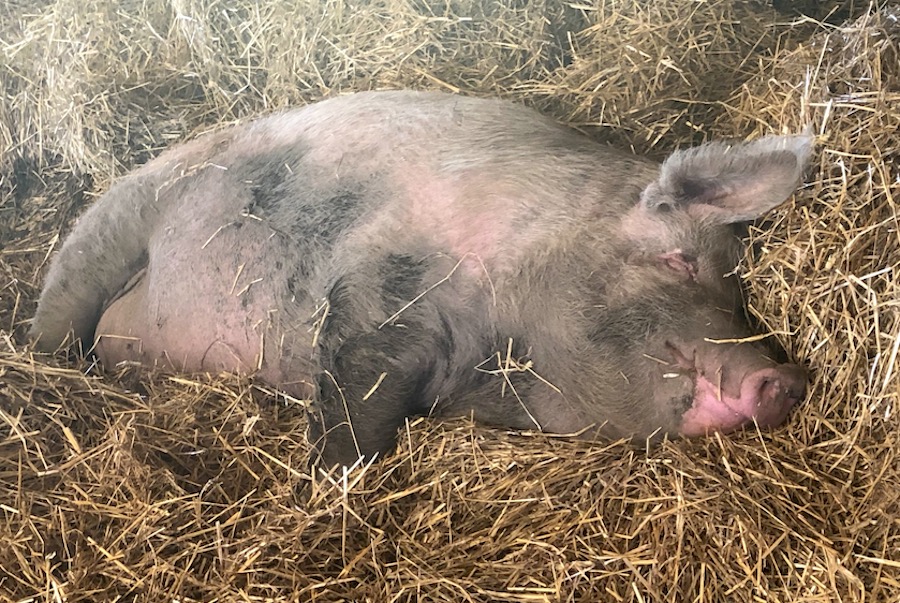 Pigs like Amelia, above, really do love to eat, sleep, and roll around in the mud, 24/7. But they’re also quite smart — smarter than the average dog! 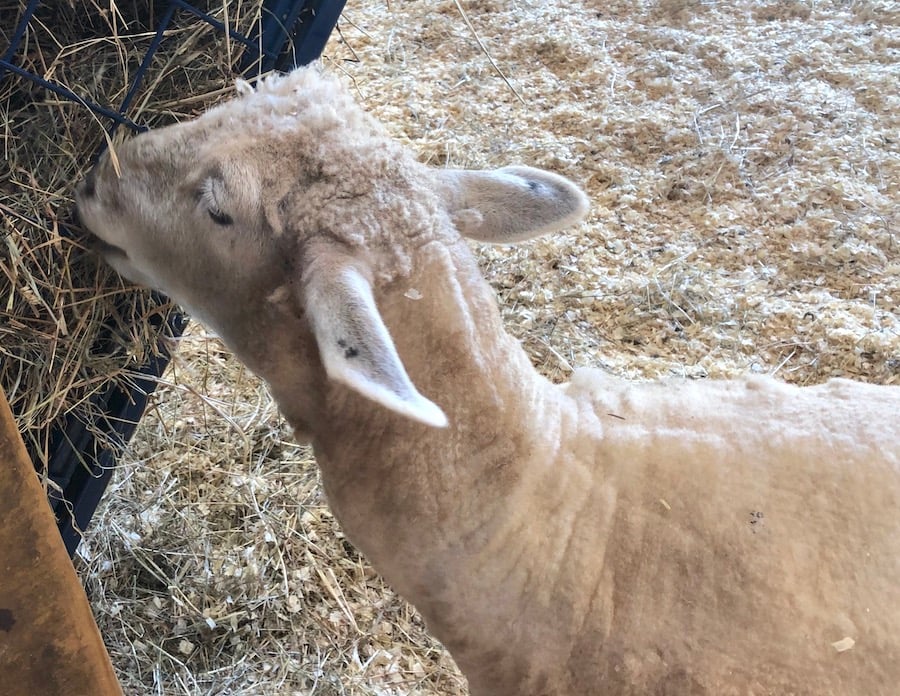 Lambs and sheep have it in their DNA to be wary of humans, so they’re a bit shy. They’re still adorable to watch, though, like this young one named Dorothy Jo. 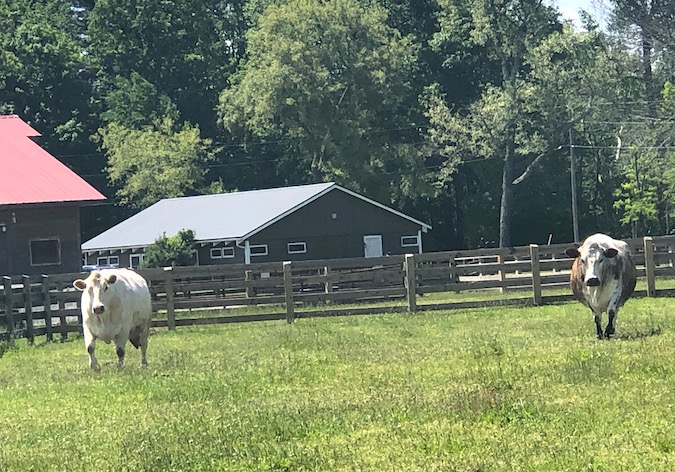 These cows, Kayli and Maybell, aren’t shy at all, on the other hand. They saw our group of humans and came running — or at least ambling — knowing that it meant getting a treat and some attention. 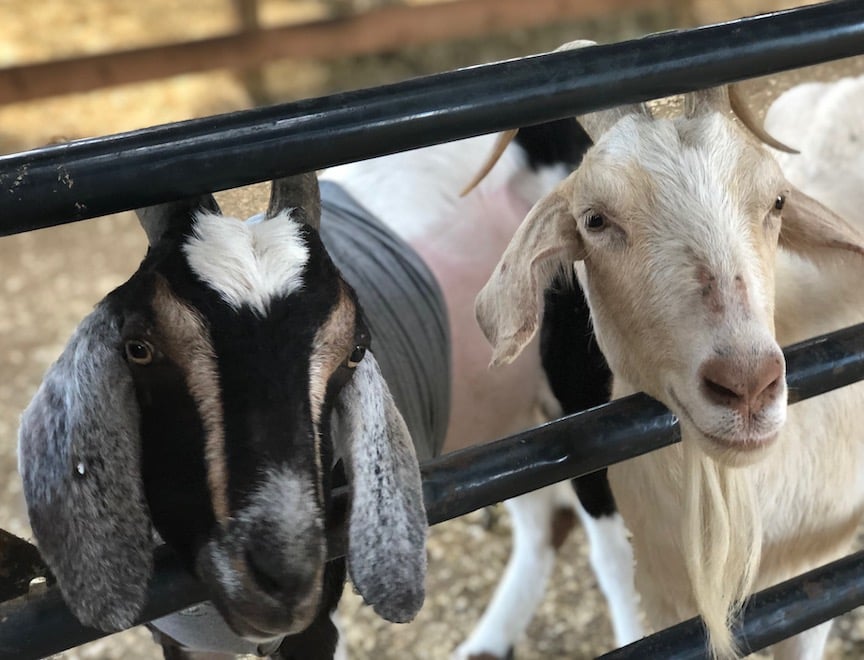 Goats are among the most playful of the animals and, being of small stature, sure to be a favorite of kids (there are even pygmy goats). Who could resist faces like these? Kellen (a boy, left) and Debbie sure look like they’re all smiles. A heartbreaking fact I learned (and was surprised by) is that goats are now the most consumed land animal on earth, after chickens. 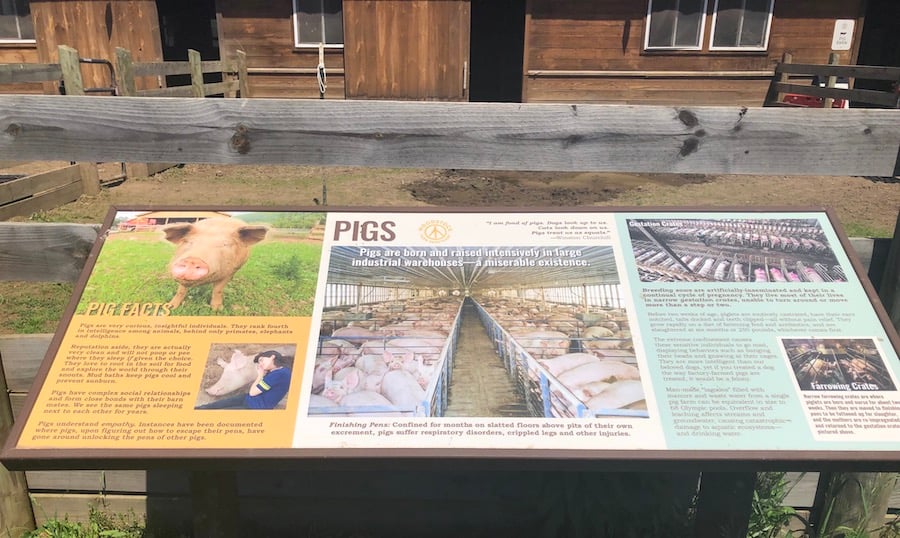 Tours include stories of how the animals were rescued and learning about their habits and personalities. For contrast, there are intermittent photo exhibits of what life can be like for animals on factory farms.

Farm animal sanctuaries are driven by a love for innocent animals, but their mission overlaps with the urgent cause of climate change. Animal agribusiness is simply unsustainable, and is a major contributor to greenhouse gases. It’s an environmental disaster in other ways as well — polluting land and water, and massively depleting resources.

Woodstock Farm Sanctuary is located in High Falls, New York, about a 30-minute drive from exit 18 off the New York State Thruway. When you get off the exit, you’re in charming New Paltz, NY. You can make a whole vegan outing of your day! Start with lunch at Karma Road Organic Café, then drive over the mountain for your visit to Woodstock Farm Sanctuary.

On your way back through New Paltz, stop at Commissary for good, strong coffee and an array of creative vegan fare. Around the corner is Commissary’s sister store, Lagusta’s Luscious, featuring delectable vegan chocolate creations. Two other major attractions in New Paltz are Historic Huguenot Street and the Samuel Dorsky Museum of Art on the SUNY-New Paltz campus.

You might also enjoy a visit to the Safe Haven Farm Sanctuary in Poughquag, NY, a place where over one hundred farm animals rescued from neglect, slaughter, and abuse can breathe deeply and run freely in the place that they call home.