Here’s a round-up of watercress recipes, some tasty ways to use an often overlooked leafy green, plus more info and tips. Here you’ll find salads, of course, plus soups, dressings, a dip, pesto, and even a delicious burger. 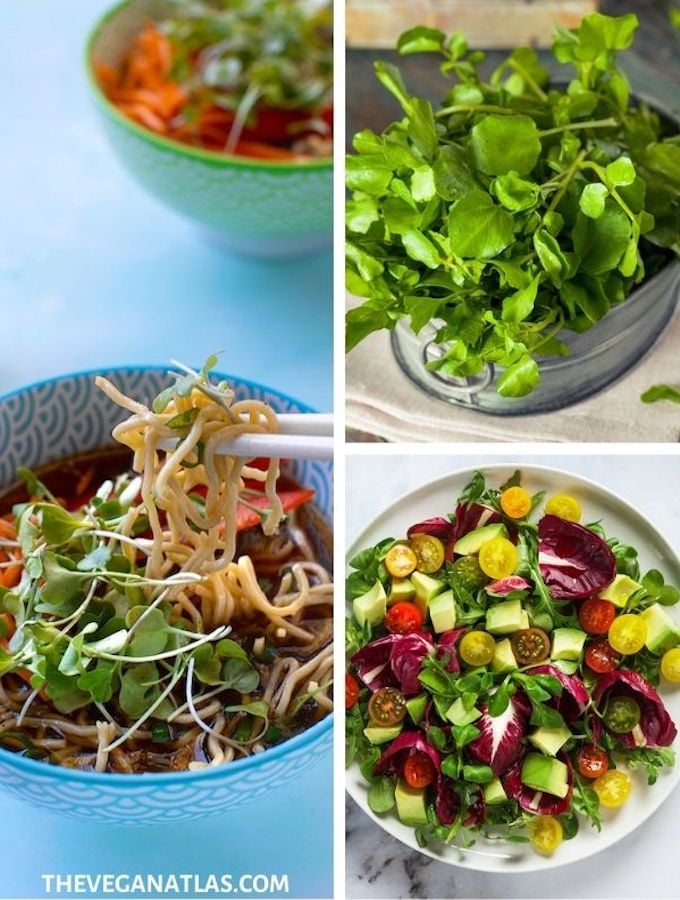 We should all be eating more watercress! Everyone knows that leafy greens are among the best foods we can be eating. But when it comes to this category, watercress is often overlooked, and that’s a pity, because it’s among the most nutrient-packed among the leafy greens.

Get to know watercress

The flavor of watercress is often described as peppery, and though that’s already a bit of a culinary cliché, but there’s really no other word for it. A member of the mustard family, the peppery heat of this tiny green comes from the mustard oils that are released when chewing the leaves. It has a mild and pleasant bite, making this tender green is easy to love. 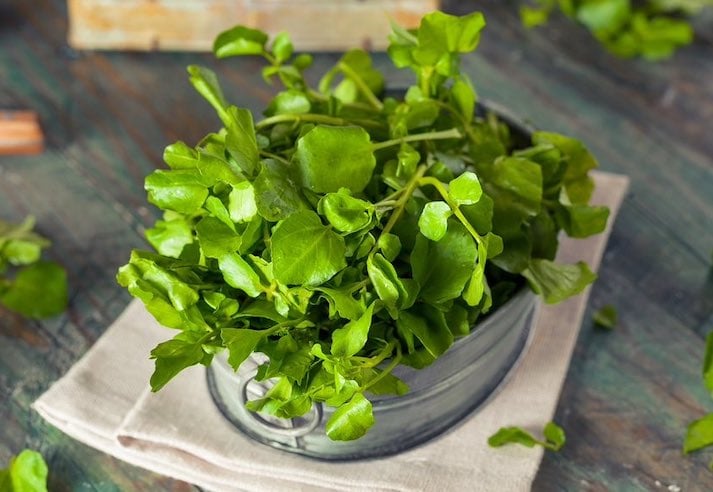 Using watercress: The easiest (and tastiest) way to use this delicate green is uncooked. In addition to enjoying it in salads, watercress is also good in sandwiches in place of lettuce, dips, and herbal salad dressings in place of, or in addition to, parsley.

Once the leaves look like they need to be used up, watercress is good as a last-minute addition to soups and briefly wilted in stir-fries.

Nutrition info: Watercress is believed to have healing and tonic properties above and beyond its splendid concentration of vitamins, minerals, and phytochemical. It’s especially rich in vitamins K and C. It has zero fat and almost no calories. Here’s a full look at its nutrition facts. 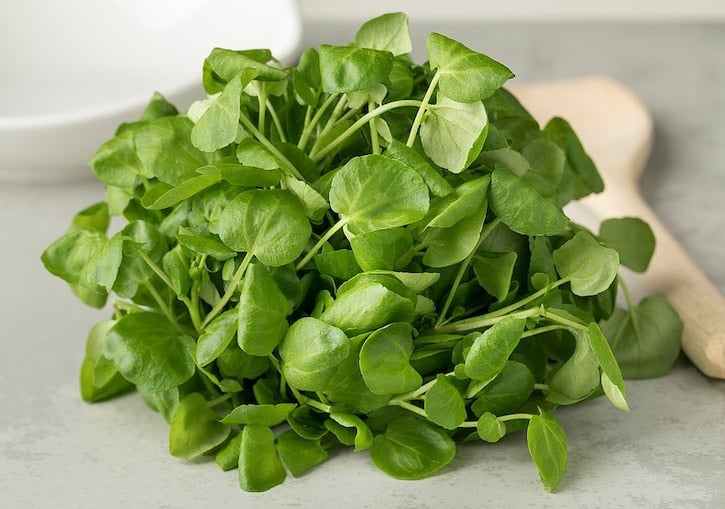 Buying and storing watercress: Watercress is usually sold in small bouquet-like bundles. The diminutive roundish leaves top long, slender stems. The stems are edible and you can use as much or as little of them as you choose; it’s a purely aesthetic decision.

Ideally, you won’t store it for long! Watercress is highly perishable — perhaps even more so than fresh herbs, so buy it no more than the day before you plan to use it. Watercress comes in small bunches with the roots intact. Wrap a damp paper towel around the roots, then put the whole thing in a plastic bag.

Thanks to the talented bloggers who participated in this roundup, with permission to use their photos and link to their full recipes. 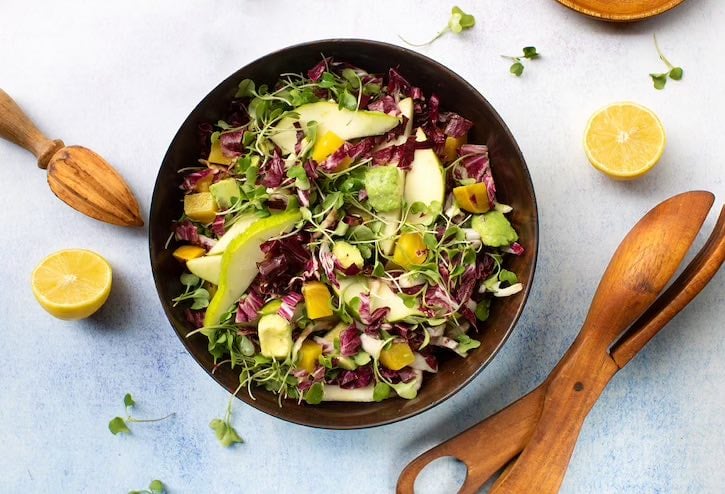 Watercress and Radicchio Salad: The colorful selection of fresh produce in this salad needs little embellishment to offer a heaping portion of refreshment. The mellow flavors, beets, avocado, and apple (or pear) are a nice contrast with the bracing greens. 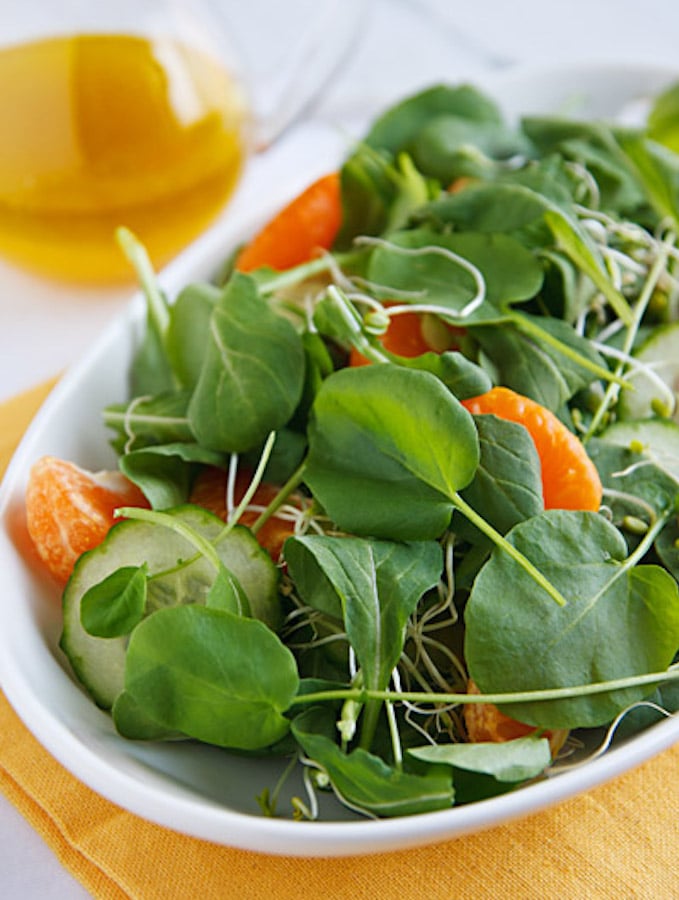 Watercress Salad with Oranges and Cucumber: This simple salad, embellished with oranges, cucumber, and sprouts is a lovely way to highlight this delectable, vitamin-packed leafy green. Though it can be enjoyed any time of year, it’s at its most optimal when spring’s early greens intersect with the last of the cold season’s citrus. 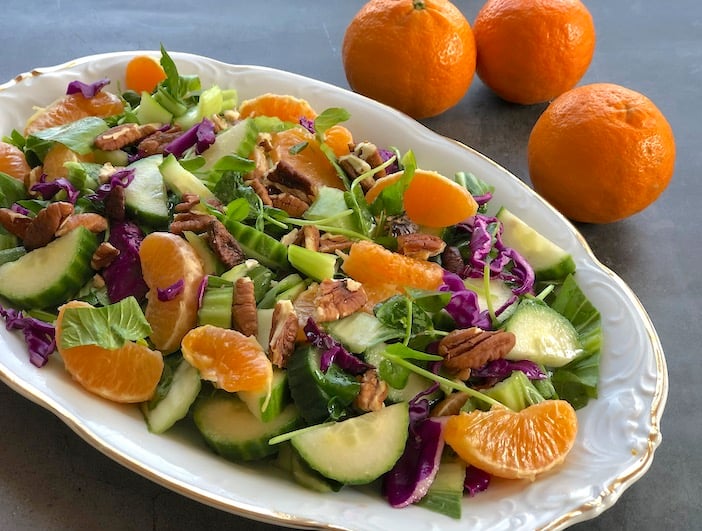 Orange and Watercress Salad with Bok Choy or Belgian Endive: This classy salad featuring has a lively citrus flavor provided by fresh oranges and their juice. Choose between bok choy or Belgian endive, two often overlooked salad vegetables, both of which pair well with watercress. 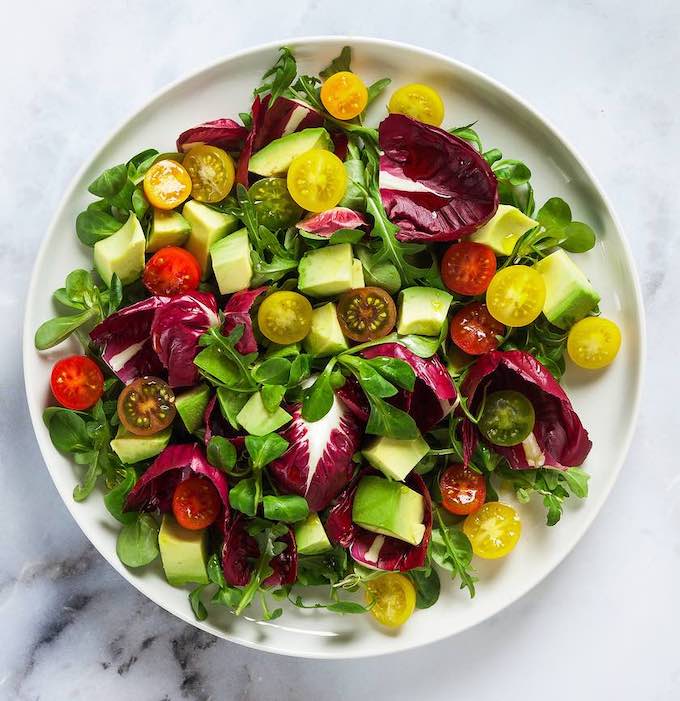 Avocado and Radicchio Salad with Lime Vinaigrette: Sometimes, it’s the combination of ingredients rather than lots of ingredients than makes a great salad. Case in point, this colorful avocado and radicchio salad. Avocado, radicchio, watercress (or other tender greens), and cherry tomatoes — that’s it! It’s a simple salad that makes a statement. 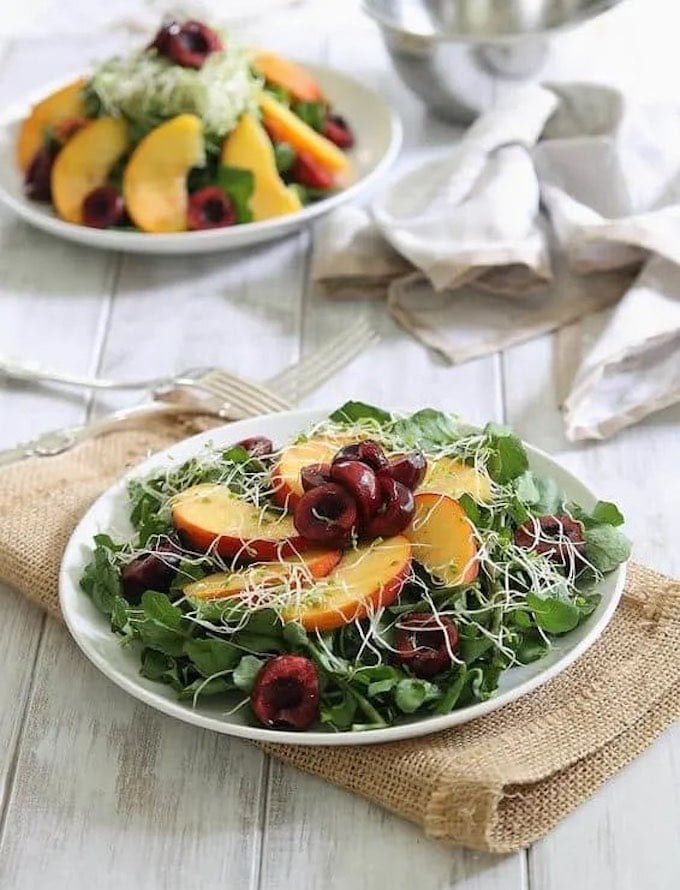 Peach and Cherry Watercress Salad: From Running to the Kitchen, a peach and cherry watercress salad that’s simple seasonal eating at it’s best. Spicy watercress is balanced out by sweet juicy peaches and cherries. 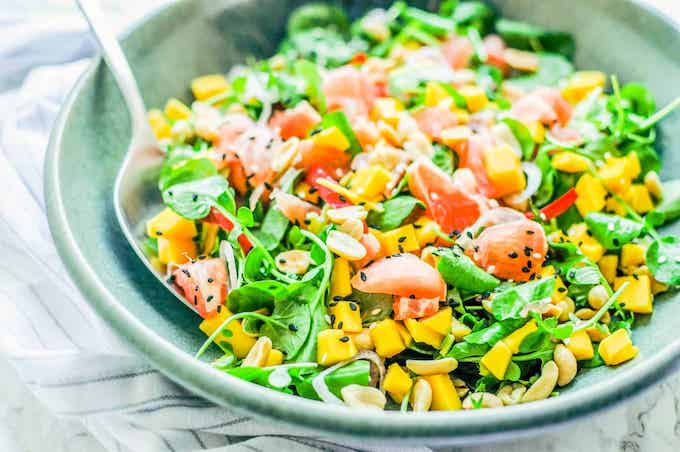 Spicy Thai Grapefruit Salad: From This Healthy Table, a spicy Thai grapefruit salad is bright and zesty with complementary flavors. It’s a real showpiece for a dinner party! 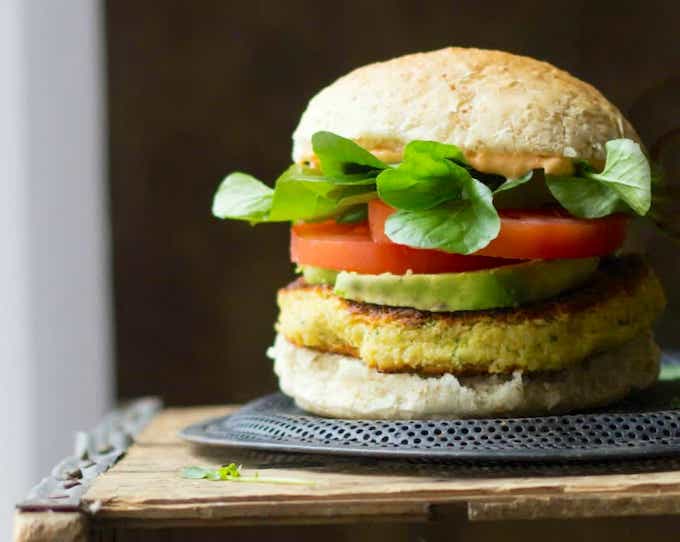 Chickpea Veggie Burgers: From The Healthy Epicure, for the best – and we mean best – and most flavorful chickpea veggie burgers, look no further than these! They’re made with chickpeas, lemon, watercress and chives atop a whole grain bun with spicy garlic aioli. 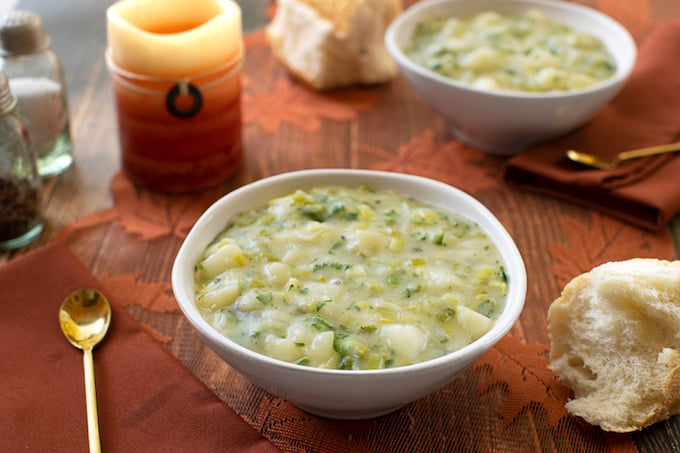 Vegan Leek and Potato Soup with Watercress: The bright color and peppery flavor of watercress adds a touch of green goodness to a classic soup. Usually a dairy-based soup, it’s easy to make vegan leek and potato soup by simply swapping in plant-based milk. 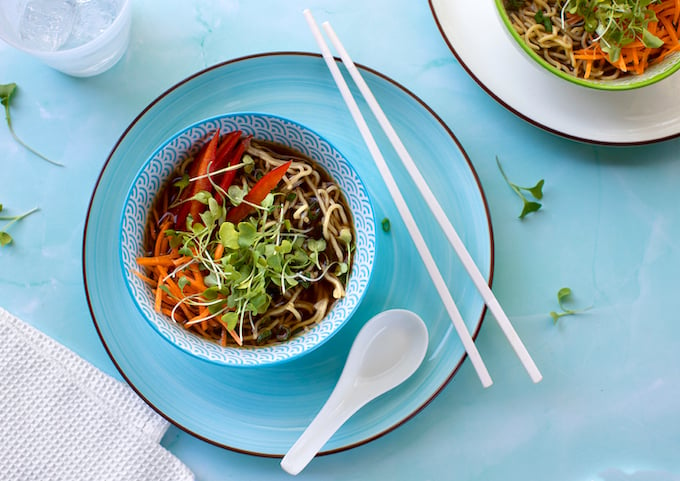 Quick Ginger-Miso Noodle Soup: In this Japanese-inspired soup, noodles are cooked in broth and are topped with crisp raw vegetables, making for a fun and offbeat presentation. Use soba, udon, or any other long, thin noodle (even ramen) for this recipe — they all work! 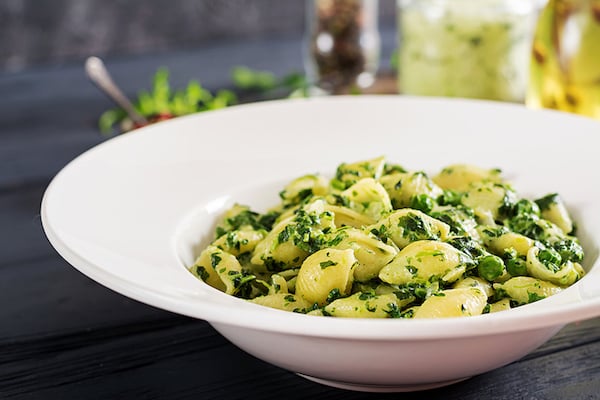 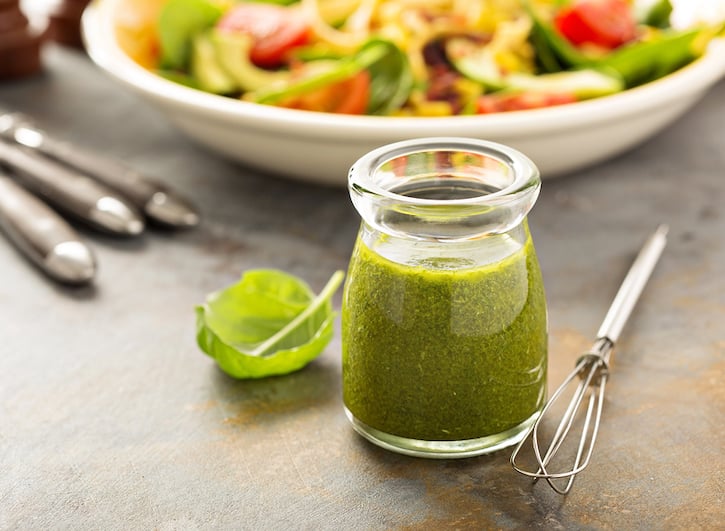 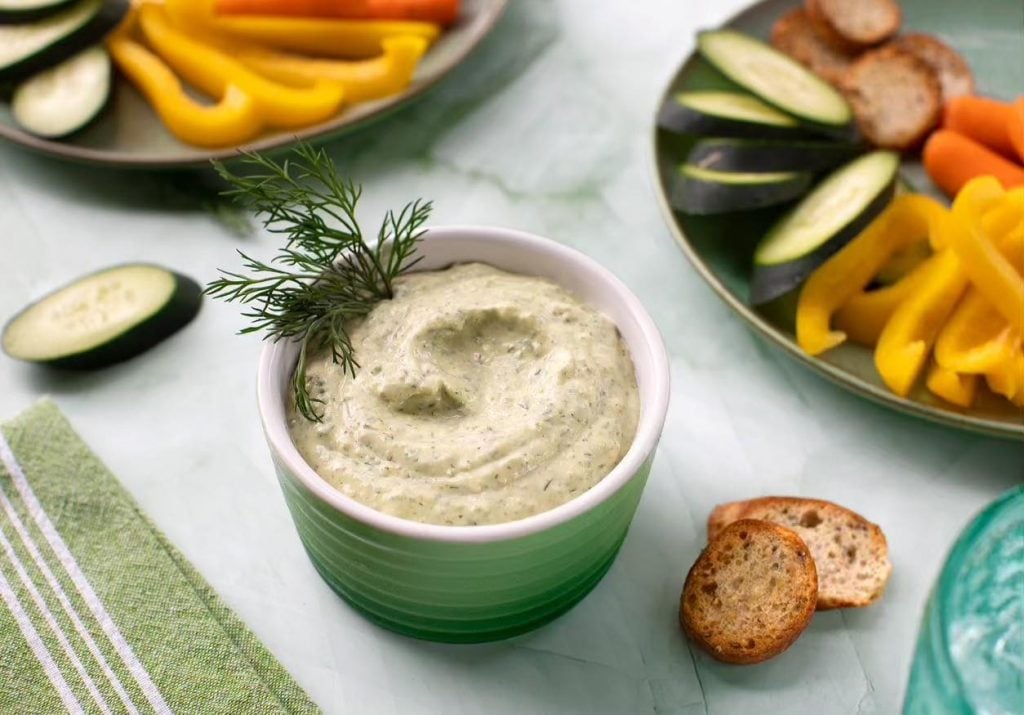 Creamy Tahini-Dill Watercress Dip: This creamy dairy-free dip benefits from the peppery flavor of this tiny leafy green. Silken tofu is a fantastically smooth dairy-free base, and hint of tahini pulls all the flavors together.

Here are more of this site’s Good Food Guides.

Previous Post: « Vegan Leek and Potato Soup with Watercress
Next Post: A Guide to Pumpkin Seeds and Pumpkin Seed Butter »