Here’s a concise guide to leeks and their varieties — baby leeks, ramps, and Chinese leeks. You’ll find tips on buying, storage, and prep as well as general uses and links to recipes. 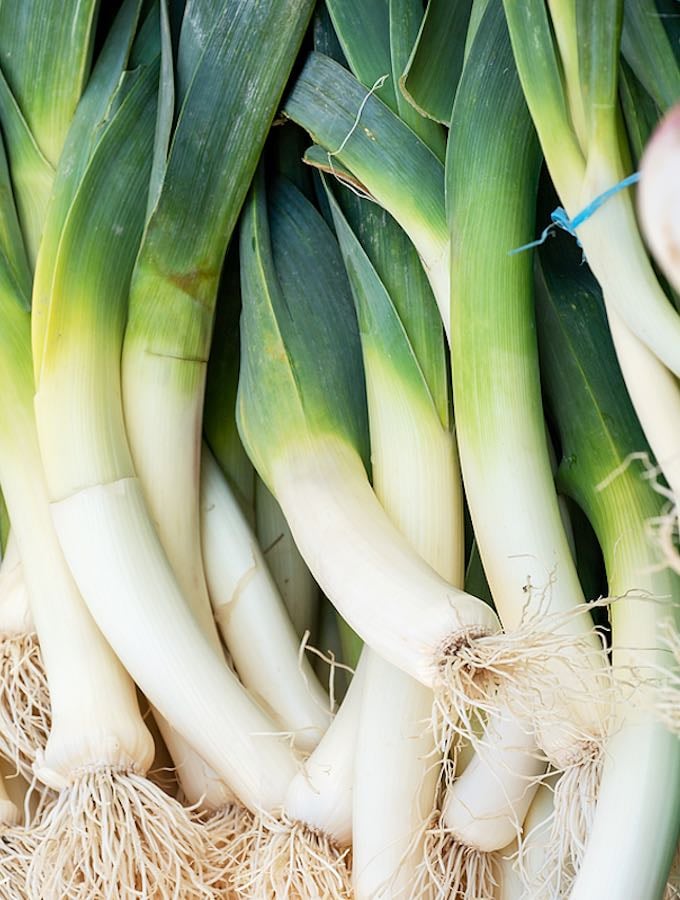 Mature leeks look like enormous green onions (scallions) with sturdy, deep green stalks forming a chevron-patterned crown atop a thick cylindrical bulb with brush-like rootlets. The bulb is pearly-white at the bottom, but as it reaches toward the stalks, the color turns from white to celery green to deep green. 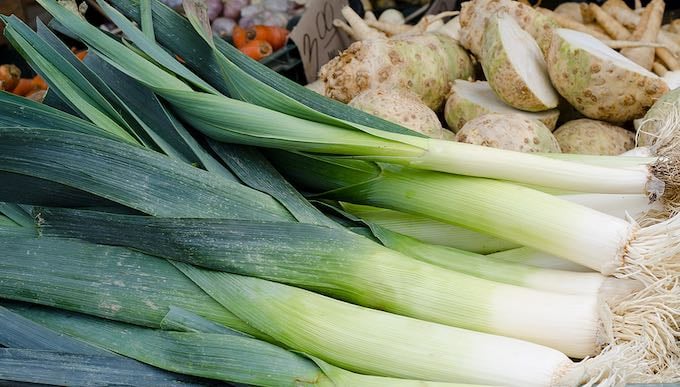 Common Leeks are related to both garlic and onions, and have a sweeter, subtler flavor than their lily-family cousins. When cooked, they have a luxurious, silky texture. 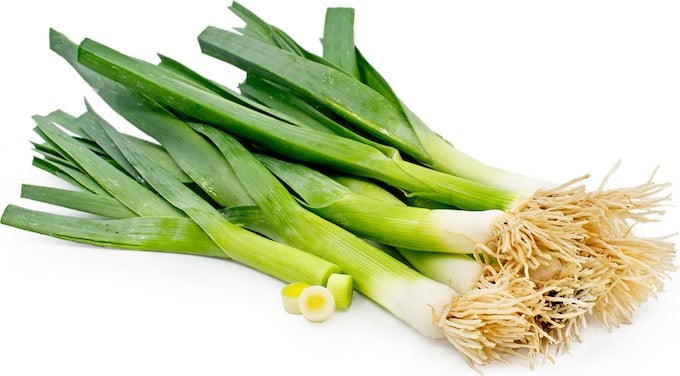 Baby leeks are pencil-thin and have a sweeter taste than mature leeks. They resemble scallions quite a bit. Because they are smaller than leeks, baby leeks are more tender. Learn lots more about baby leeks. 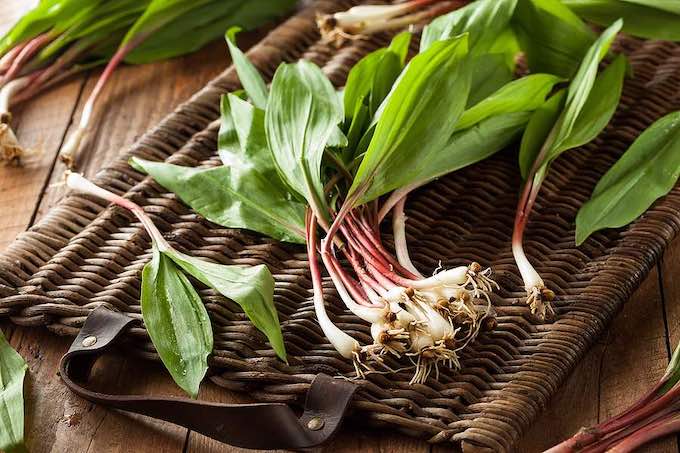 Ramps are wild leeks. Like baby leeks, their bulbs are scallion-like thin. Often they are lightly tinged with purple and are topped with flat, pointed green leaves. Native to eastern North America, ramps are available for a very short time each year, generally from March to June. The flavor is seductively pungent, like a combination of leeks and onion.

Chinese leeks are immature spring garlic. Fresh spring garlic is young garlic, before it has formed cloves. So the name reflects when it is harvested. A Chinese leek is the infant of the clan, looking like a very immature leek with a very small white bulb tinged in pink at one end and long, thin green stalks at the other.

Avoid leeks with yellowed or withered tops. White portion should unblemished and feel solid and free of any splitting. The edible portion is white and light green, so look for leeks that have the largest usable area. Don’t trim or wash before storing.

Wrap loosely in plastic and refrigerate in crisper drawer. Leeks and baby leeks will be good for from 5 to 14 days, depending on how fresh they are when purchased; ramps and Chinese leeks will last 3 to 4 days. Because ramps are available such a short time, chop and freeze in airtight container for later use. 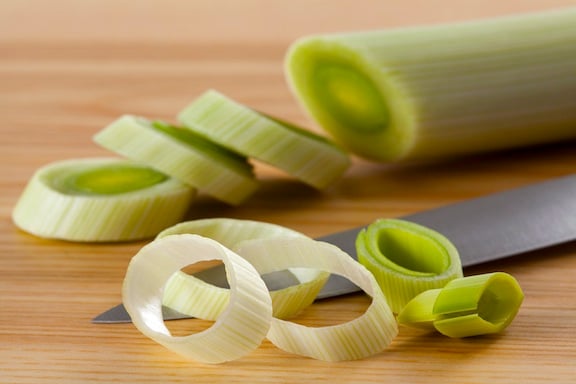 Often, there is sandy soil lodged between rings, so washing is very important. Trim off the brush-like root end and dark green stalks (stalks can be used in stock preparation, but are otherwise not palatable).

Cut remaining white and light-green portion in half lengthwise. Cut into 1/4-inch slices. Place in a colander and run water over them, separating them as you do, until completely clean. If very sandy, first put the sliced leeks into a bowl of water and swish around to loosen before transferring to a colander to complete the rinsing. Shake off water.

Wash thoroughly with cold water. Trim and discard root ends. Strip off thin outer layer as you would a green onion (scallion). Often they’re grilled or broiled with stalks intact.

All types of leeks are good sources of vitamin A and a significant source of vitamin C, K, and the minerals manganese and iron. Chinese leek is a good source of calcium. Here’s are more details on the nutritional value of leeks. 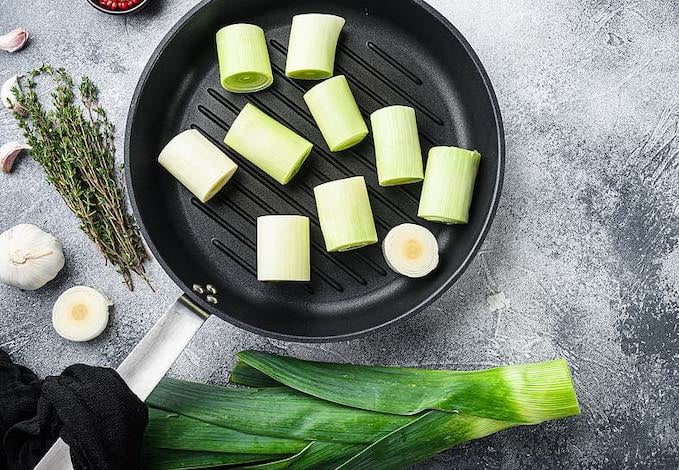 How to use leeks

General uses: Leeks and baby leeks may be substituted for onion in recipes (but not vice versa). Raw, they can be thinly sliced and added to salads, relishes, and salsas. All varieties of leek can be braised, baked, or stir-fried. They’re a delicious addition to soups, casseroles, salads, pasta, rice and other grain dishes, sauces, and gratins.

Colcannon: The Irish classic combining potatoes and scallion can also be made with any variety of leeks.

Leek and potato soup: Possibly one of the most classic uses for leeks! See links to plant-based versions of this normally dairy-based soup in the next sections, links to recipes using leeks.

Braised leeks: Place well-rinsed, sliced leeks or whole baby leeks, Chinese leeks, or ramps in large skillet. Cover with vegetable broth. Simmer, partially covered, until tender but not overdone. Drain, saving broth for another use (like soup stock). Very tasty served with a lemony vinaigrette and garnished with olives and chopped fresh herbs such as basil and parsley.

Sautéed leeks: Simply sauté cut and rinsed leeks in a small amount of olive oil plus a little water for 8 minutes or so over medium heat, until tender. Combine with other vegetable like broccoli, broccoli rabe, cauliflower, fennel, mushrooms, carrots, or any combination of these. 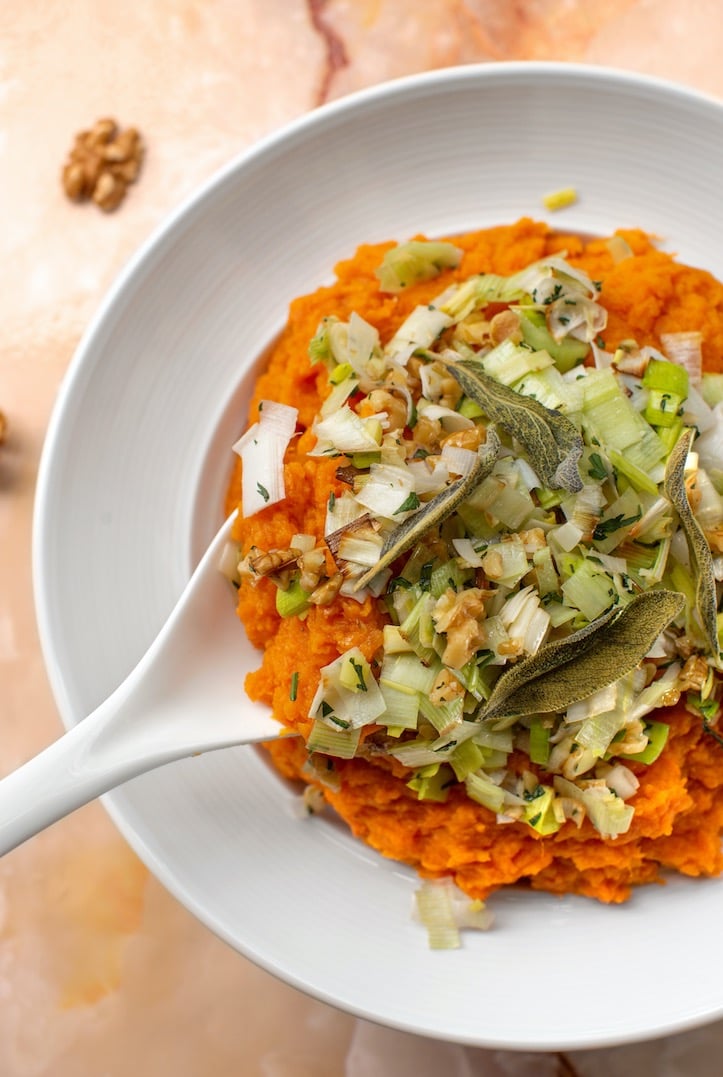