Figs conceal a world of mysteries inside small teardrop-shaped packages. Commonly understood as fruits, it’s more accurate to describe them as clusters of flowers growing inside edible shells. This guide to fresh figs features tips on varieties, easy ways to use them, and links to plant-based recipes. 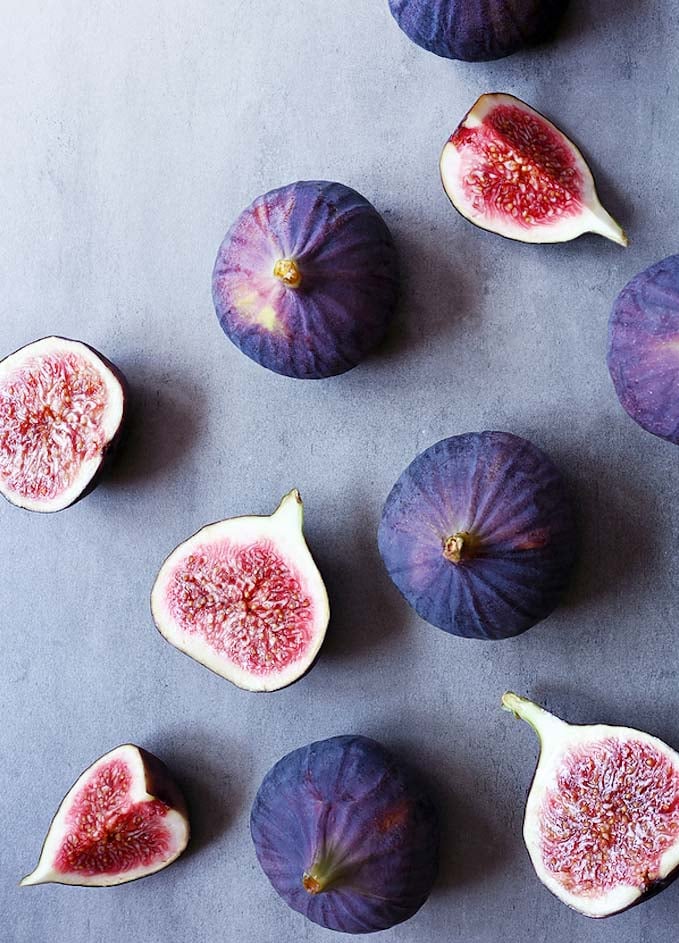 Figs contain hundreds of tiny seeds, punctuating each bite with a symphony of small pops and crunches, while the flesh itself is soft, jammy, and richly perfumed.

While dried figs were the only way much of the U.S. knew these sweet delights for many years, better means of growing and distribution have introduced fresh figs to all corners of the earth. If you’ve just discovered the wonders of fresh figs, you’re in for a real treat.

A Brief History of Figs

As one of the first cultivated fruits known to humankind, fig trees predate recorded history. Remains of fig trees were found during Neolithic excavation sites dating back to approximately 5000 BCE.

They played a critical role in mythology and religion, carrying incredible symbolic weight in the daily lives of thousands, to say nothing of their culinary contributions to society. The first fig trees likely originated in Asia and spread throughout the Mediterranean region thanks to the ancient Greeks and Romans.

Figs are found in many biblical texts, representing peace, fertility, and prosperity. Some scholars theorize that the “forbidden fruit” Eve took a bite out of was a fig, not an apple, especially based on the supposed location and supposed time of the event. 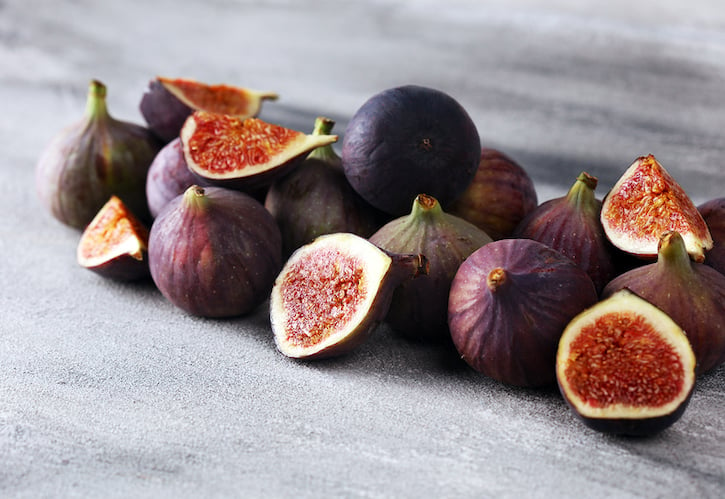 There are some 800 different species of figs grown all over the world. Some are more popular than others for enjoying fresh vs dried, though any can be processed or eaten whole as such.

What’s available in your local market depends on the growing climate, since figs can be finicky about soil, sunlight, and temperature for optimal harvests. California and Texas produce most of North America’s commercial crops, accounting for the most common varieties you’re likely to encounter, which include, but aren’t limited to: 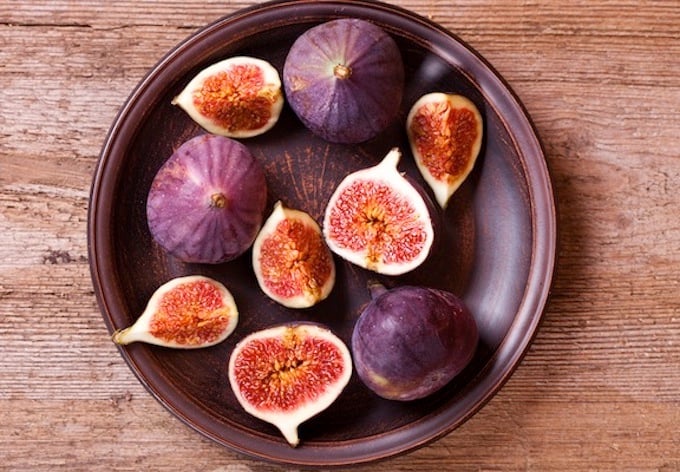 When shopping for fresh figs, look for fruits that are plump, free of blemishes or bruises, and soft to the touch. Figs will not continue to ripen once removed from the tree, but they may continue to soften if they sit out at room temperature for a day or two.

That said, fresh figs have a very short shelf life, and should be stored in the fridge in a single layer for no more than 4 to 5 days. Rinse your figs only right before using, because any added moisture can cause premature rot.

If you’re craving fresh figs but can’t find a source near you, consider a source like Melissa’s Produce, which offers several varieties of fresh figs and just about any other produce under the sun. Note that even from a source like this, fresh figs aren’t in season year-round.

Considered an ancient superfood fit for modern life, figs are an excellent addition to most diets. They’re especially high in fiber to lend a greater sense of satiety throughout the day and aid in digestion.

To that end, figs also contain prebiotics to help with regularity. Figs contain many essential vitamins and minerals. You’ll find the greatest concentrations of Vitamin A, Vitamin C, calcium, iron, potassium, and magnesium.

Though low in calories, figs are high in natural sugars, so they should be eaten in moderation by those needing to manage sugar content in their diet. Many traditional desserts have been sweetened entirely with figs. This approach creates treats that are much lower on the glycemic index for a healthier alternative to sugary snacks. 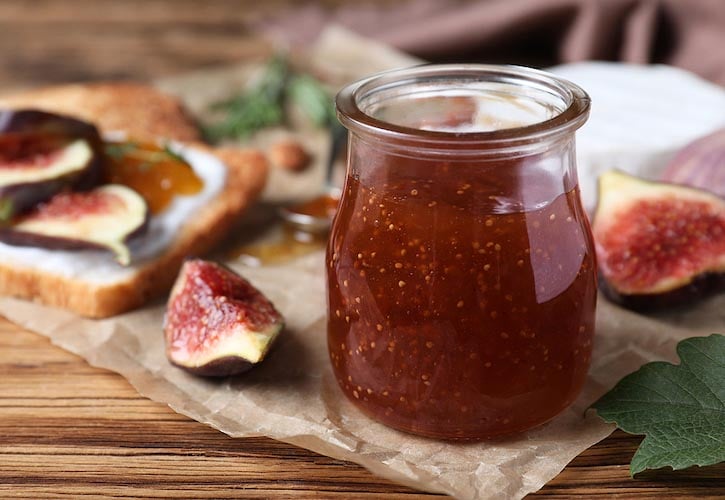 Simple Ways to Use Fresh Figs

Fresh figs can be eaten right out of hand but take care to remove the hard stems on top. The rest of the raw fruit is entirely edible, including the seeds inside. Given their perishable nature, figs are excellent candidates for canning as jam, preserves, and even pickles.

In the summertime, figs are a popular choice for grilling since the natural sugars caramelize beautifully without the need for any added sweetener. In colder months, they’re great to bake in the oven, roast, or broil for a similar effect. Served warm with a scoop of ice cream, it’s like the best parts of a gooey fruit pie without the crust.

Figs make a delightful counterpoint to savory dishes as well. They’re often added to cheese or charcuterie boards (in our case, of the vegan variety) as a contrast to salty, tangy wedges or spreads. 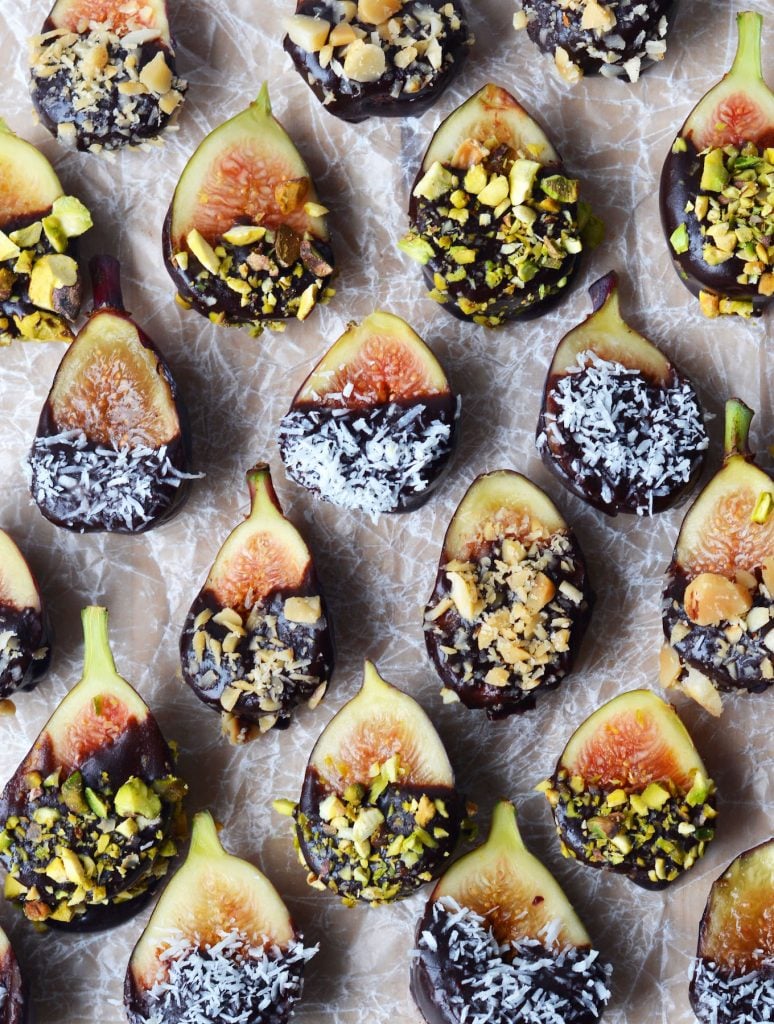 Chocolate-dipped: Halves of fresh figs are perfect for dipping into chocolate for an easy yet impressive dessert. See the simple recipe, linked above.

Jam, jelly, and preserves: There’s no shortage of inspiration for putting up excess figs to enjoy for months to come. It’s hard to beat a simple, classic Fig Jam, made with just four ingredients and no fancy equipment.

Smoothies: Think “peanut butter and jelly,” but all grown up. This Fresh Fig Smoothie with Dates & Almond Butter is creamy, refreshing, nutty, and rich. You can also use frozen figs here for an even cooler blend that could rival a genuine milkshake.

Salads: Balancing a tangy dressing over tender greens, there’s no bad time to serve Spinach Fig Salad with Balsamic Vinaigrette. While this recipe makes a versatile side dish as written, you could always add beans, baked tofu, or your favorite plant-based protein to make it a full meal.

Pies and tarts: Vegan Fig Tart with Frangipane takes a French approach to la figue, baking them into a cakey, custardy filling cradled in a pastry crust. When it’s too hot to consider turning on the oven, this Raw Fig Pie might be just the cool contender you’re craving. As the seasons shift, though, a Fresh Fig Pie to Welcome Fall could be a truly comforting treat to cozy into.

Crumbles, cobblers, and crisps: Figs can easily replace some or all the fruit called for in your favorite formulas. If you want more inspiration from start to finish, figs share the spotlight to make a marvelous Fig and Blueberry Cobbler for Two, Vegan Fig and Walnut Crumble, and Vegan Fig & Apple Quinoa Crisp.

Frozen desserts: You’ll want a double scoop of Dairy-Free Caramelized Fig Ice Cream, made with a base of coconut milk and almond milk for a lusciously creamy, smooth texture. If you’d rather a full-bodied fig flavor, you might want to give Fig Sorbet for Rosh Hashanah a spin, whether or not it’s to celebrate the Jewish New Year.

Wine: For those interested in home brewing, making your Fig Wine can be a fun and gratifying project. You’ll need a few specialty ingredients to kickstart the fermentation process, such as wine yeast and pectin enzymes, which are best found through online sources. 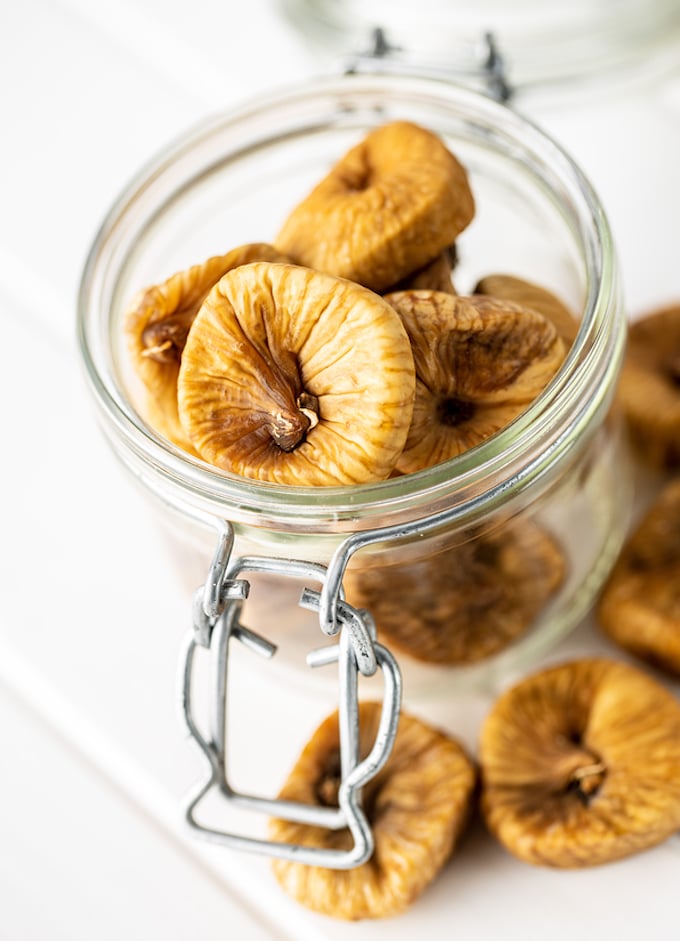 Previous Post: « 10+ Family-Friendly Vegan Recipes for using Tater Tots
Next Post: 17 Common Bean Varieties and How to Use Them »