Here’s a basic guide to common onion varieties — those most often found in supermarkets, natural foods stores, farm markets, and maybe even your own garden. You’ll find tips on prep and storage, and some easy ways to incorporate more into your daily fare. 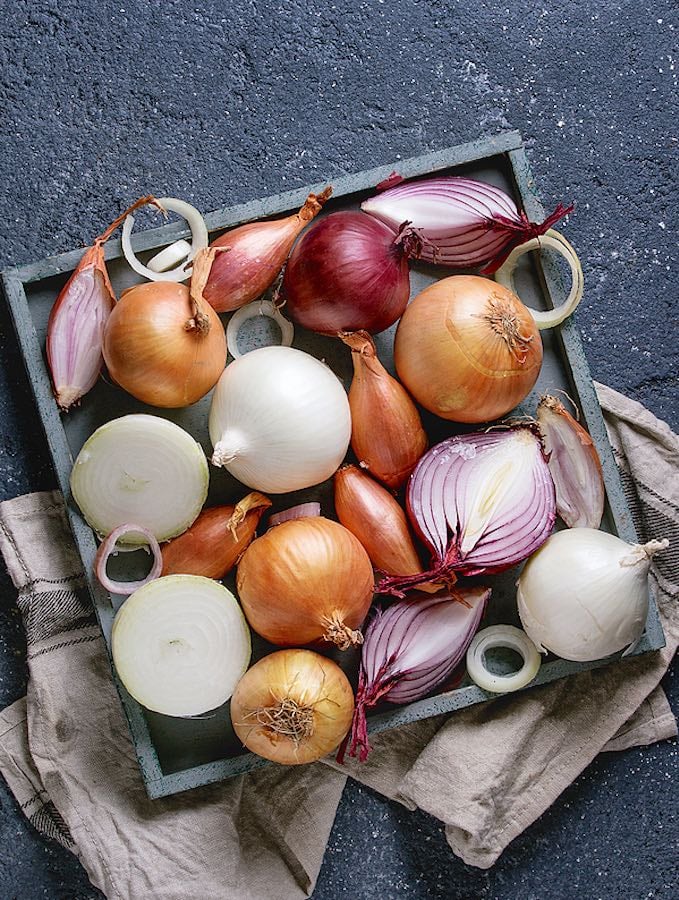 Concentric layer on layer of juicy flesh fills an onion’s paper-thin skins. Unruly roots dangle at its base, while the pungent-sweet bulb above holds endless culinary potential.

It’s too bad that most think of onions as only a flavoring element. Their delectable flavor profiles more than qualify them to take the starring role in vegetable dishes. 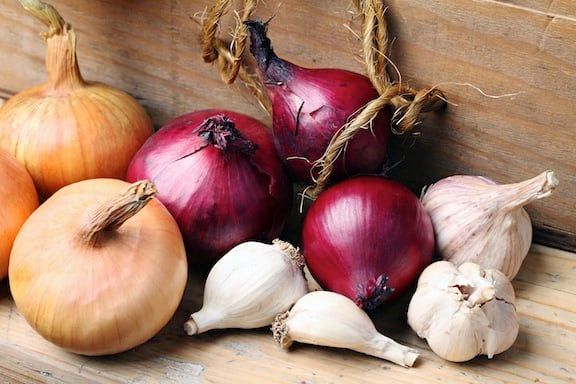 Though garlic isn’t a type of onion, it’s likewise part of the allium family of vegetables.

There are more than five hundred onion varieties, and because onions are easily crossbred, new varieties and hybrids abound. Color, taste, shape, and size vary, but generally speaking, onions fall into three major categories, as follows:

Storage onions: Those that can be stored for long periods at room temperature are dubbed “storage” onions. They generally have a more pronounced pungency (sometimes described in loving terms as mouth burn or heat).

Sweet onions: Aptly named, these onions have a pronounced sweetness (or lack storage onion heat and have lower acidity). They leave a delicious, very slight pungent aftertaste. They have a shorter shelf life than storage onions but a longer one than green onions.

Why do onions make cooks cry? Each variety shares a common trait: cutting them releases eye-burning sulfuric compounds. Often, the older the onion, the more eye-irritating it becomes. Cooks have come up with interesting ways to eliminate onion tears, from wearing goggles to working next to flames to washing onions under cold water. But most agree that working quickly while using a very sharp knife is extremely helpful. 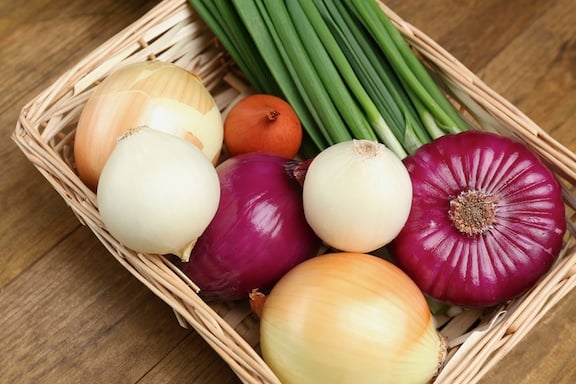 Most storage and sweet onion varieties are available year-round.

BOILER (gold, red, and white)
Storage onion that is golf-ball sized. Mild pungency Red are sweetest, but whites are most popular.

GREEN (scallion or spring)
Spring onion with small, elongated white bulb and long, bright-green stalks. Mild taste. Green stalks have chive-like taste and are often included in recipes. You might wonder why chives aren’t included here; they’re actually classified as herbs. Still, they can be used for much the same purposes.

LEEKS
Leeks often neglected members of the onion family, resemble giant green onions (aka scallions), to which they’re related botanically. Sweeter and somewhat milder than onions. The most tender leeks are quite slender, about the thickness of a thumb, but those are rare. What are most commonly available are plump leeks in bunches of three or four.

MEXICAN BBQ
Look like large green onions with big green stalks and pearl onion—size bulb. There are several onion varieties that fall into this category; all are picked immature with stalks intact. Pungent flavor with underlying sweetness.

PEARL (gold, red, and white)
Storage onion smaller than boiler. Some growers name those with less than I-inch diameters “picklers,” those with 1-inch diameters as “pearls.” Very mild pungency Reds are sweetest, but whites are most popular.

SHALLOTS
Copper-tinged brown skin, parchment thin and brittle, covers the shallot’s milder-than-onion interior. A member of the Allium (onion) genus, it’s formed something like garlic, and is only a little larger, but generally has only 2 to 4 large cloves. Arranged in onion-like layers, shallots are sweeter than onion in both taste and aroma, but can be used interchangeably. 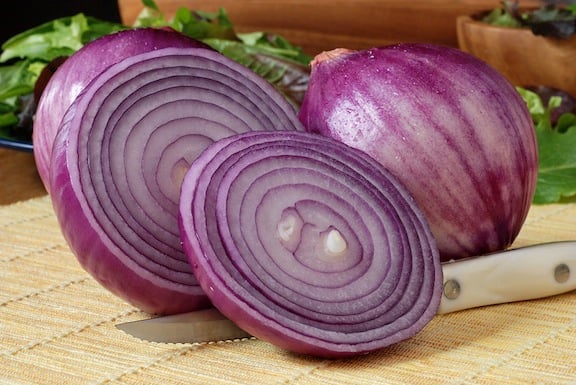 For storage onions and sweet onions, trim top and bottom, leaving enough root end intact so that layers stay together. Cut in half lengthwise. Pull off and discard skin. Place cut side down on cutting board. Cut into wedges or slices.

Peeling pearl onions can be a chore. To make it easier, make a shallow X in stem ends. Boil 5 minutes and drain. Refresh with cold water. When cool enough to handle, pinch at root ends and onions will pop out of skins. 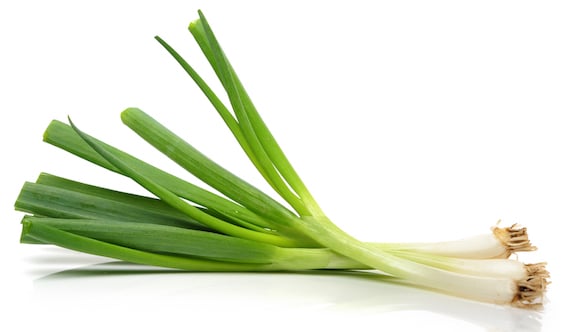 Wash thoroughly in cold running water. Trim root end. Some recipes call for using green stalks; other do not. Leeks have to be chopped then rinsed well, as intact rings can harbor quite a bit of sandy soil. Dark green leaves are too tough to use, but can be well washed and used in making vegetable broth, then discarded.

Spring onions are good sources of vitamins A, C, and K. Storage and sweet onions are a significant source of vitamins C and B6. All varieties are low in calories and carbs, as they’re mostly water, but have other notable benefits. See more about the nutrient profile of onions.

Soup starter: Nearly all soups can benefit from a sauté of finely chopped onion before adding liquid and other ingredients. 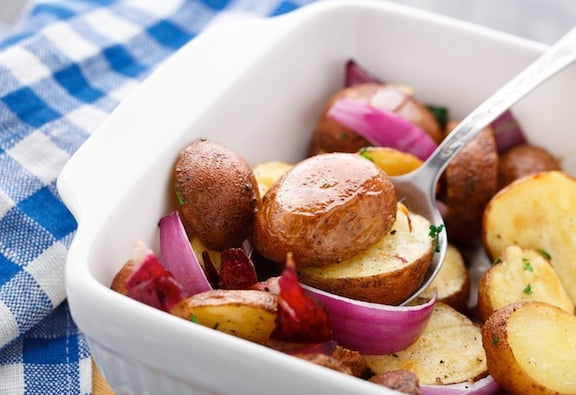 Roast alone or mixed with other vegetables. Especially good with potatoes and sweet potatoes.

To push the concept further, top with vinaigrette (1/2 cup extra-virgin olive oil mixed with 1 tablespoon white wine vinegar or balsamic vinegar, salt to taste, and pinch of dried red chili flakes). Marinate at least 15 minutes. Serve as is as side dish, or chop and stir into sour cream for dip or baked potato topper.

Raw in salads or salsas: Not everyone can tolerate raw onions, but if you’re a fan (and your parter is, too!), use them raw to your heart’s content in all kinds of salads. Red onions, cut into rings or half-rings, are especially appealing when used raw in salads. Any kind of onion can (and should!) go into making homemade salsa. Chopped fine, red onions make an amazing topper for creamy guacamole.

Caramelized: Heat a combination of vegan butter and vegetable oil in large, deep skillet on medium-high heat. Add sliced (storage or sweet) onion and, if desired, a pinch of sugar; toss to coat. Cook for 4 to 5 minutes, stirring infrequently, so that onions start to soften. Reduce heat to medium or medium-low. Cook until nicely browned, stirring occasionally.

Depending on amount of onion used, this can take 15 to 30 minutes. Season to taste with salt and ground pepper. Use on pizza, polenta, or bruschetta, or in soup or gravy. Delicious tossed into other cooked vegetables, especially mashed potatoes, green beans, or squash. 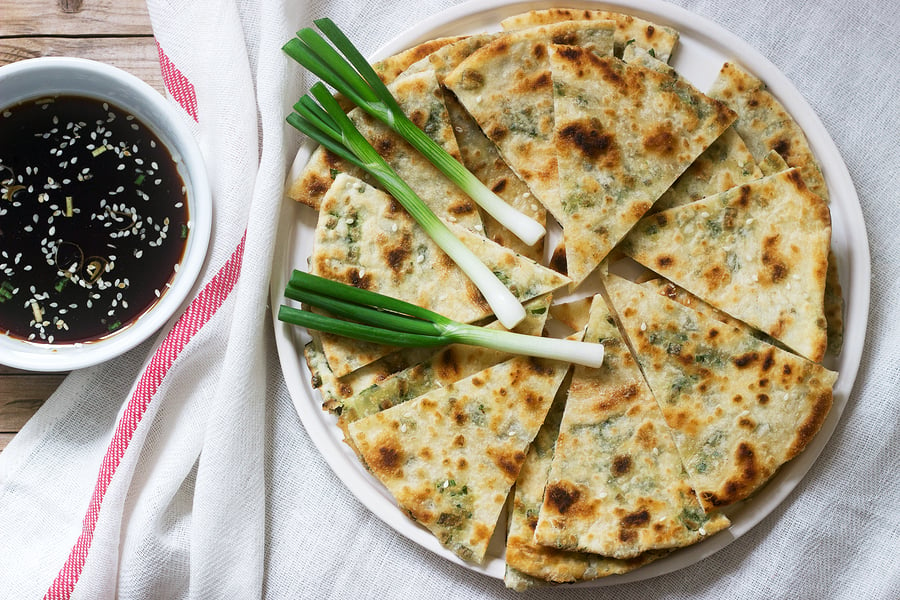 Grilled Mexican BBQ onions: Cut off roots and most of dark green stalks. Heat barbecue and brush grates with vegetable oil. Grill on medium heat, basting lightly with vegetable oil and seasoning to taste with spicy mixture such as Pico de Gallo seasoning or seasoned salt. Turn and relocate onions on cooler portion of grill from time to time to prevent burning. Grill until tender and nicely browned on both sides (generally about 10 minutes per side). 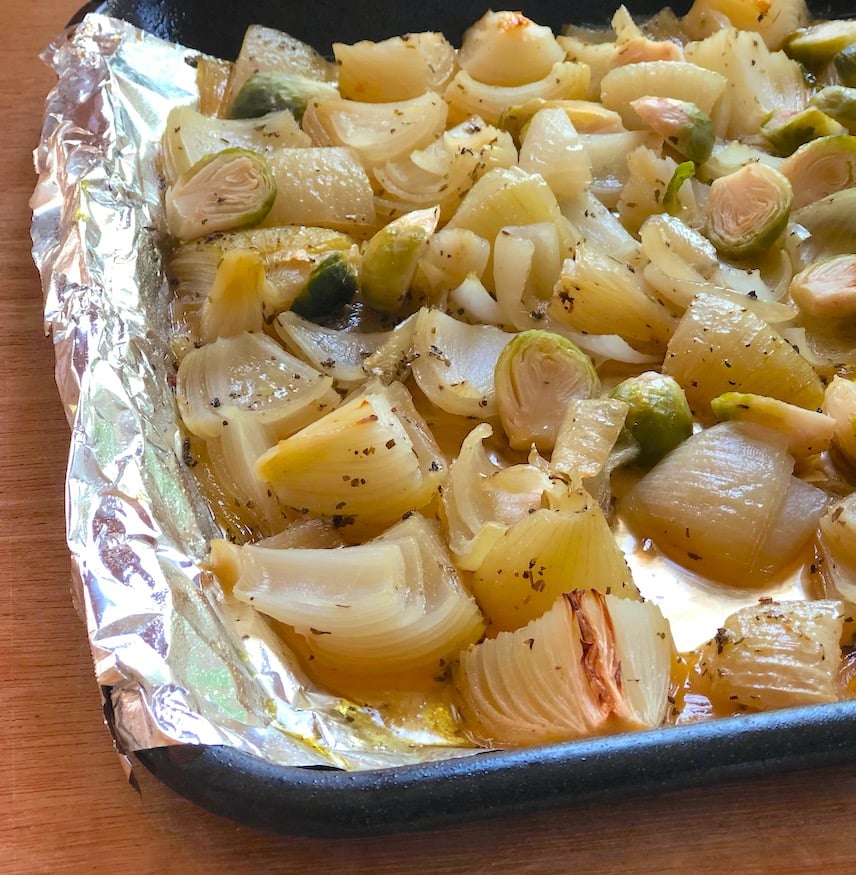 Slow-baked with a sweet glaze: Amp up the already sweet flavor of storage onions by using in a slow-baked dish with a little added sweetener like maple syrup or agave. See Maple-Glazed Onions and Brussels Sprouts.

Sweet onion syrup: Simply slice a few onions and cook slowly on medium-low heat with olive oil until lightly and evenly browned. A little wine or liquor of your choice can be added to also aid in complimenting and bringing out those juicy flavors. To make into a syrup, puree caramel in a food processor with enough maple syrup or agave to sweeten to your taste.

Onion jam, marmalade, or chutney: Use sweet or storage onion to make delicious condiments. Here’s an easy recipe for onion marmalade and a tasty onion chutney.

Melissa’s Great Book of Produce is available wherever books are sold.