What is kombucha, and why should you be drinking it? The word “kombucha,” literally “kelp tea” in Japanese, refers to something entirely different in Japan: a mild tea rather than a fizzy, fermented beverage. 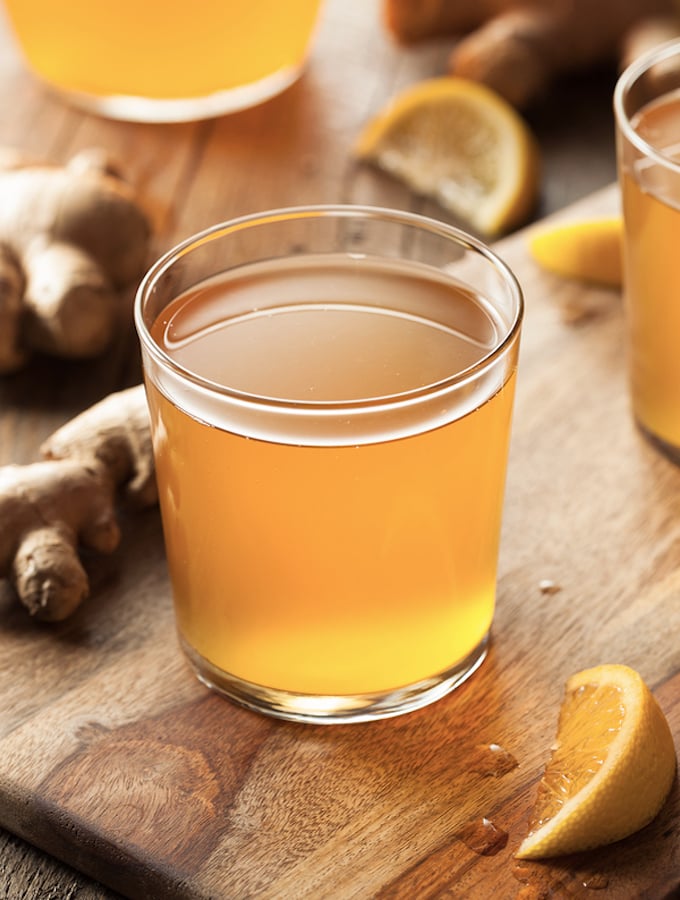 My first experience with kombucha, the ancient fermented drink, was a home brew made by a slightly loopy nutritionist. She called it mushroom tea. It looked ’shroomy — tawny and cloudy, with bits floating in it including something that looked pretty dicey.

“It’s the scoby,” she said, brightly. Whatever a scoby was, it wasn’t pretty. Still, I was game. I drank it down. It was slightly sweet, yet tangy and sharp, almost vinegary, with a little bit of fizz, and then the rubbery scoby.

I waited for the secrets of the universe to reveal themselves. Years have passed, and kombucha didn’t bring them to me.

But the secrets of kombucha, those I can share with you. In this post, we’ll be asking the question, what is kombucha, and why should you be drinking it?

5. And yes, kombucha is vegan.

Scoby, the mushroomy-looking thing, is an acronym for “symbiotic cultures of bacteria and yeast.” It looks like a floating slab of blubber, but it makes kombucha’s fermentation magic happen.

Does bacteria in your brew sound like a bad idea? In this case, the right kind of bacteria is a good thing. 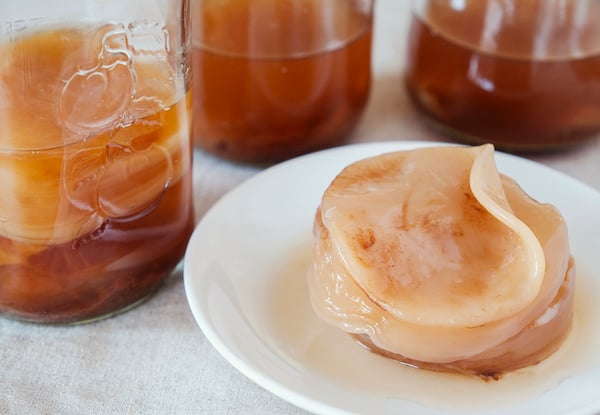 The scoby infuses kombucha with yeast and beneficial bacteria to create fermentation, giving the drink its typical tartness, effervescence and probiotic punch. Probiotics are microscopic, but don’t underestimate their power. They play defense for your microbiome (a fancy name for your gut).

True believers in the powers of kombucha credit the drink with everything from weight loss to busting stress. The most comprehensive study of its wellness properties comes from the University of Latvia, where fermentation is part of their, well, culture. This old-country practice has long been popular throughout Eastern Europe.

The study declares kombucha a keeper on four counts:

“Most people notice fairly quickly that their digestion improves, too,” says Dr. Michelle Schoffro Cook. “And in my experience, when digestion improves, overall health and specific conditions can follow behind.” A new Johns Hopkins study backs her up on this.

No wonder kombucha is now abundantly available commercially. Bottles (16 ounces, 2 servings) average $3 to $5, which is not cheap but no more expensive than a fancy latte.

Just check out the wall o’ booch at your supermarket’s refrigerated section. Among the national big boy brands are Brew Dr. Kombucha, GT’s Live Kombucha (which has been in the booch biz for over 20 years), Health-Ade, Humm and KeVita.

The Story On Kombucha’s Sugar And Alcohol

Just as bacteria and yeast have a natural place in your kombucha, so do sugar and alcohol. They’re both part of the process. Most of the sugar gets eaten by the bacteria during fermentation, usually leaving anywhere between 2 to 6 grams per 8-ounce serving. “That’s not likely to hurt most people,” says Cook.

In fact, it’s more likely to help. Sugary drinks account for much of the added sugars in the American diet. If you’re a fool for fizzy drinks, swapping kombucha for soda lowers your sugar intake and ups your probiotics.

Naturally sweet and bubbly kombucha is more fun than popping a probiotic pill and is healthier than a can of Coke, which contains 39 grams of added sugar per serving. (However, Health-Ade brand kombucha is being sued for underreporting how much sugar and alcohol it contains.)

About that booze — here’s a quick explanation: During fermentation, the yeast eats the sugar, creating carbon dioxide ― that’s the fizz ― and a trace amount of alcohol. The alcohol serves as a preservative. Kombucha must contain less than 0.5 percent alcohol to avoid being classified (and taxed) as an alcoholic beverage.

Producers, pumped by kombucha sales going up a staggering 37.4 percent in 2017 and projected to hit $1.8 billion by 2020, are lobbying Congress to raise that alcohol limit to 1.25 percent. 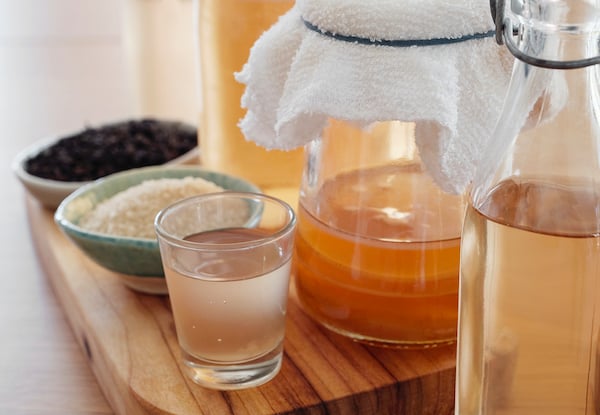 Kombucha Brands Are Adding More Nutritional Benefits To Their Bottles

In the meantime, kombucha brewers are outdoing each other to create more flavors and add more active cultures ― because with the market so hot, kombucha’s natural probiotics are no longer enough.

Companies are cramming in prebiotics— naturally healing fiber-rich whole foods that help foster probiotics — and adaptogens like ginseng, rhodiola and other plants that help you protect your body from stress.

Beneficial? You bet. But the amount and concentration of prebiotics you’ll get per serving is unlikely to make a dent. Cook’s advice? “Eat fruit, nuts, seeds, legumes, whole grains, or other food that contains fiber and natural sugars.

Then you don’t need to worry about prebiotics,” she says. “Just ensure your kombucha contains live cultures and has not been pasteurized during the bottling process.”

Overwhelmed by options? Cook urges you to DIY. She even provides recipes in her book, The Cultured Cook.

“Kombucha is so simple to make. I brew a batch of sweetened tea, let it cool, pour it into my crock, and let the scoby work its magic for the next five to seven days. Then I drink it and bottle it for the week ahead.”

Kombucha artisans are generous souls. Befriend one and ask for some scoby. An excellent Plan B is to score your scoby from a trusted source, like Kombucha Kamp.

Cook has never had a batch go bad. For the scobyphobic, she suggests discreetly draping a tea towel or cheesecloth over the crock while the contents ferment away.

Kombucha has been around for such a long time, Cook doesn’t think it’s likely to go the way of unicorn Frappuccinos.

“Our ancestors made fermented foods as part of their daily routine because they knew they helped to keep them well,” she says. “Making kombucha and other fermented foods is simply going back to our roots.” 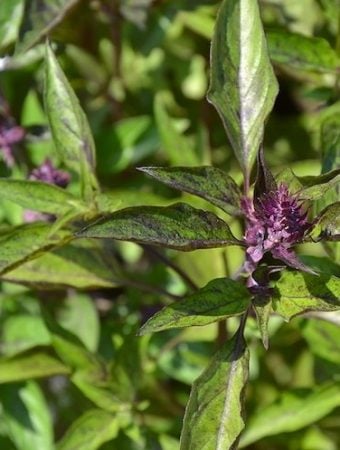 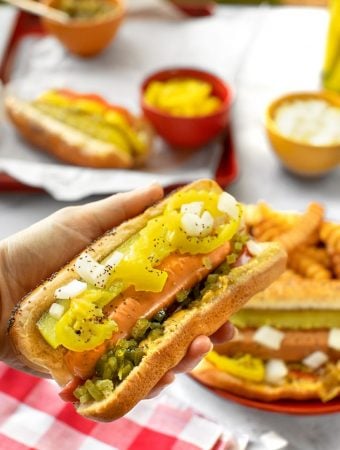 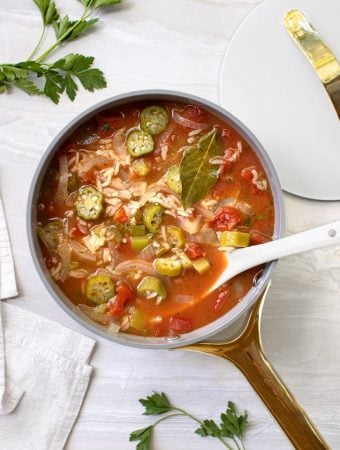 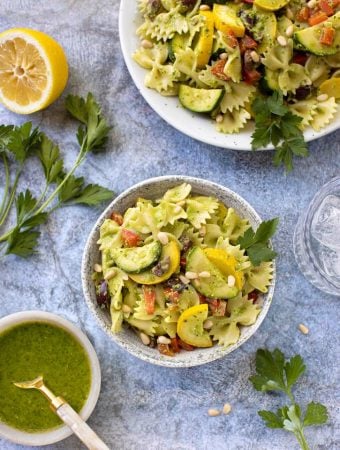 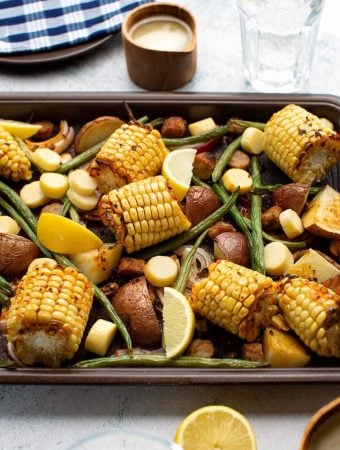