Here’s your resource for do-able, hearty fare for celebrations, year-round! With more than 200 mouthwatering recipes, Vegan Holiday Kitchen is your go-to guide for recipes and menus for major holidays. Vegans can every course of holiday meals, from appetizers to desserts.

What’s more, these lovingly crafted dishes will satisfy everyone who loves great food, no matter what their culinary preferences. There’s no reason to wait for a special occasion to enjoy these recipes — many are easy enough to make as everyday fare. 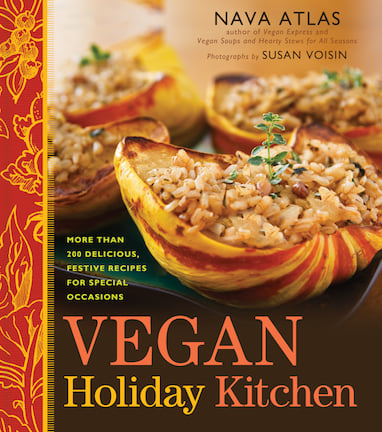 Vegan Holiday Kitchen on Bookshop.org
Also available on Amazon*, Barnes and Noble,
and wherever books are sold

Delight friends and family with delectable dishes for …

You’ll also find that many of the recipes in this collection are gluten-, soy-, and nut-free. Full color throughout, with more than 40 dazzling photos by Susan Voisin of FatFree Vegan Kitchen. Published by Sterling Publishing.

Every family should have its own designated party giver. When vegan diva Nava Atlas was growing up, that meant her Aunt Blanche. “She was the family hostess, she set the style,” recalls the author of many meatless cookbooks including Vegan Holiday Kitchen. “It was never anything fancy, but comfortable, generous and gracious. She was someone to aspire to. She helped everybody. And everyone loved her.”

Aunt Blanche would have approved of Vegan Holiday Kitchen, which offers favorite dishes for every holiday. As Atlas puts it, it’s “tradition with a twist.” The twist is a vegan makeover.

Let’s be clear — vegans like to party, too. We just choose not to do it with ham. Or brisket. Or lamb. Or all the other meaty, eggy, milky dishes that seem to make up a traditional holiday table. “Our pleasure should not come at the cost of harming other creatures,” says Atlas.

Happily, those of us who like to eat and party well need not suffer, either. This was not always the case. Atlas went meatless, back in the 1970s, when meatless meals were boring, brown and bland. “Being vegan today is easier,” she says. “The products taste good, vegan, there’s ethnic eateries everywhere.” And there’s Vegan Holiday Kitchen.

Atlas shows Thanksgiving can be bountiful indeed and not a turkey harmed. Beloved winter holiday hits go meatless, including vegan holiday cookies spiced with cinnamon and ginger, mock chopped liver (cashew, onion and mushroom pate) and “vegg” nog, thick and rich with almond milk and cashew butter, liberally spiked with rum. The spirit of the season remains but anything animal is excised.

“I love being part of the vegan community,” says Atlas. “It’s so supportive. We get more admiration. A lot of people say, ‘I wish I could be a vegan,’ not, ‘Wow are you crazy?’”

For vegans who may not run with such an enlightened crowd, Vegan Holiday Kitchen offers tips on navigating tricky social situations, like the family dinner where your aunt insists you eat the roast she slaved over (because what’s a family holiday without a little guilt or passive-aggressive behavior?) or the office party where everything contains bacon, including the cocktails (bacon-infused bourbon. It happens). Read the rest of the column here.

*These are Bookshop Affiliate and Amazon Affiliate links. If a product is purchased by linking through this site receives a modest commission, which helps maintain it and keeps it growing!