Wheatgrass is now found in several different forms, making it easier (and more enjoyable) to take than ever. This guide to wheatgrass has everything you need to know about this potent superfood, with tips on using it, with links to juices and lots of other recipes. 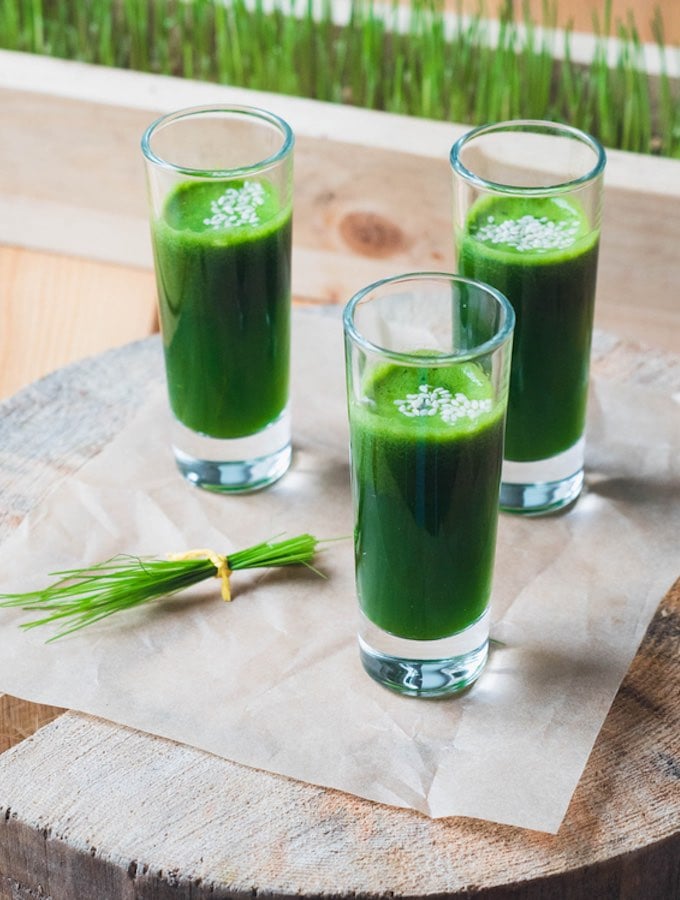 Anyone who has tried fresh-pressed wheatgrass juice will never forget their first sip: shockingly bitter, earthy, and not unlike lawn clippings at worst, or more like grassy green tea at best, few get hooked on the flavor alone. The fact that many get hooked should say something about its benefits and the power of acquired taste.

Inextricably linked with the health food movement born in the 1970s, wheatgrass has been purported to cure to just about anything that ails you. Claiming improvements in all areas of wellness, believers in this humble green elixir wouldn’t trade their daily shot for the world.

Despite the benefits it has to offer, wheatgrass still suffers from rampant misinformation, a lack of affordable access, but perhaps most notably, a polarizing taste.

A Brief History of Wheatgrass

Wheatgrass originated in ancient Egypt over 5000 years ago. There’s evidence suggesting that it existed as early as the beginning of Mesopotamian civilizations and beyond. The value of wheatgrass was recognized even in the infancy of human life, revered for its medicinal properties, and considered sacred by many.

The tiny seeds soon spread to India where they took hold as a staple of ayurvedic teachings, which is a traditional Indian system of medicine based on balancing the mind, body, and spirit to achieve harmony.

We have Ann Wigmore to thank for introducing the western world to wheatgrass in the 1970s. Renowned holistic health practitioner, naturopath, and raw food advocate, she pioneered the Hippocrates diet in which wheatgrass juice is a key component.

Even those who couldn’t follow the stringent rules of Wigmore’s regime found it easy enough to take a 1- or 2-ounce shot of wheatgrass juice, which is how it became an indispensable menu item at any reputable juice and smoothie café.

Common Wheatgrass Forms & How to Use Them

Fresh, whole wheatgrass can be found at some farmers markets and specialty health food stores, often in the produce section alongside the sprouts and microgreens. It’s highly perishable and prone to spoilage which makes this the most expensive way to buy it. Fresh wheatgrass will only last for 3 – 5 days in the fridge, at most.

Wheatgrass juice is the most common way to consume for easy, immediate consumption. Most juice shops offer it freshly pressed as a solo shot, to be taken alone or with a chaser of sharp ginger or cayenne to wash out the taste. Wheatgrass juice can also be blended into other sweeter, fruity smoothies to cover it with stronger, more appealing flavors.

To make the most of your nutritional investment, experts strongly suggest that wheatgrass should be taken raw, undiluted, as straight shots. This means drinking freshly juiced wheatgrass within one hour of pressing for maximum nutritional benefits since the quality begins to decline quickly with age.

While it’s most convenient to make wheatgrass juice at home, on demand, but it requires specialized equipment. However, the average blender can’t possibly process the fine strands enough to extract all the vitamins and minerals locked within.

Wheatgrass juicers are in a separate category of kitchen equipment, reserved for only the most dedicated consumers. These machines can cost upwards of $500, to say nothing of the hassle of regular maintenance and cleaning.

Most wheatgrass drinkers will be better off investing in sporadic treats at the local juice bar while filling the gaps with powdered wheatgrass at home. It can instantly rehydrate in plain water in any concentration you prefer. In this same way, the powder can be added to soups and stews that have already finished cooking or sprinkled over meals like seasonings.

Freeze-dried or powdered wheatgrass is the latest innovation to change the superfood playing field, making it easier to reap the benefits without the harsh taste. Stored in single-serving packets, it can keep almost indefinitely and blend seamlessly into all kinds of recipes. For those who can’t stand it in any sort of food, this powder can be found packaged in capsules like genuine dietary supplements.

For those more interested in the aesthetic appeal of wheatgrass, the powdered form can be used as a natural coloring in sweet or savory preparations. It adds a bright green hue to everything from frostings, ice cream, crackers, and cakes. A little bit goes a long way, so the added flavor is negligible. 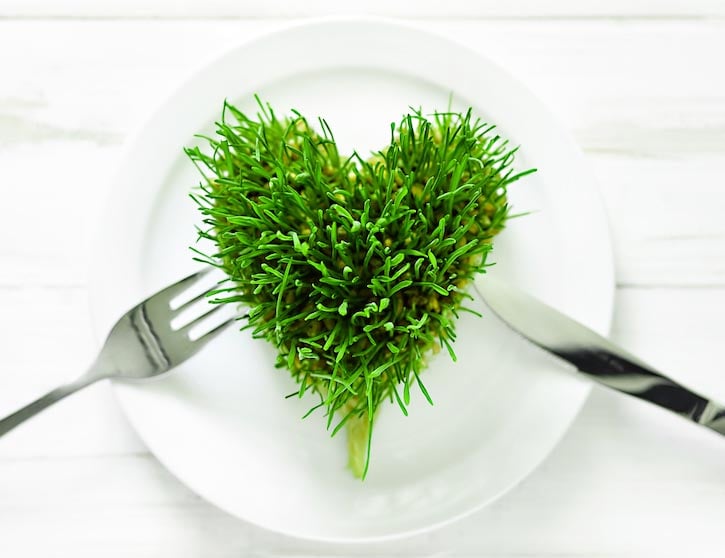 Countless health claims about the uses for wheatgrass range from reasonable to fantastical. Research is still needed to verify its efficacy as a treatment for ailments, from minor to life-threatening, beyond largely anecdotal evidence.

What’s known for a fact is that wheatgrass is an excellent source of many nutrients, including vitamins A, C, E, K, and several B vitamins. It has notable amounts of calcium, iron, and magnesium.

Chlorophyll is what gives wheatgrass such a vibrant green color. This is what allows plants to absorb energy from the sun and is a powerful antioxidant in humans.

Wheatgrass offers all these nutrients in a very small package for a few calories. A 1-ounce shot of fresh wheatgrass juice has only 10 calories and even boasts 2 grams of protein. Here’s a complete look at the nutrition profile of wheatgrass.

Wheatgrass is the fresh sprout portion of the wheat plant, however, it’s safe for most people with gluten intolerance to consume. Gluten is found in the seed or kernel, not the sprout, so wheatgrass itself is gluten-free. Cross-contamination is possible though, so those who have celiac disease should consult a Registered Dietician before using. 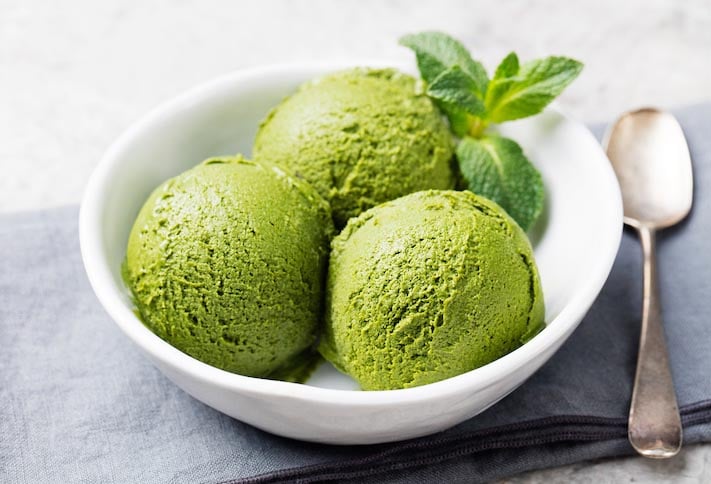 Homemade wheatgrass juice: Arguably the number one way to consume wheatgrass, here are a few tutorials on how to make it at home, for the truly dedicated:

Smoothies: The easiest way to enjoy fresh wheatgrass juice is by blending it into a sweet smoothie. This Creamy Minty Wheatgrass Smoothie tastes more like mint ice cream than health food, with the added nutrition of some veggies hidden inside, too. For a more fruity approach, try a Baby Spinach, Blueberry, and Wheatgrass Smoothie, which is quick and easy to whip up.

Lemonade: Beat the heat with a lighter, hydrating drink like Wheatgrass Lemonade. This one is sweetened with whole apples, making a great lower-sugar alternative to conventional mixes.

Dressing: Take advantage of the earthy taste of wheatgrass and use it in a savory salad. Wheatgrass Lime Cilantro Dressing is bright and punchy, adding a distinctive flavor drizzled over all sorts of leafy greens.

Soup: While you could sprinkle a spoonful of wheatgrass powder into any soup after it’s finished cooking, it’s even easier when you start with a cold blend, like Chilled Tarragon Zucchini Soup.

Dips: No one will know that your party-starters are extra green thanks to a little help from your favorite superfood. Wheatgrass Guacamole is a great way to sneak some extra nutrition into picky eaters.

Ice cream: This might seem far afield, but yes, there are a few homemade wheatgrass ice cream variations to try. Here’s a dairy-free Wheatgrass Avocado Pistachio Ice Cream, for one.

Previous Post: « 45 + Delectable Vegan Recipes for Using Avocado
Next Post: A Guide to Oyster Mushrooms – with tips, ideas, and recipes »