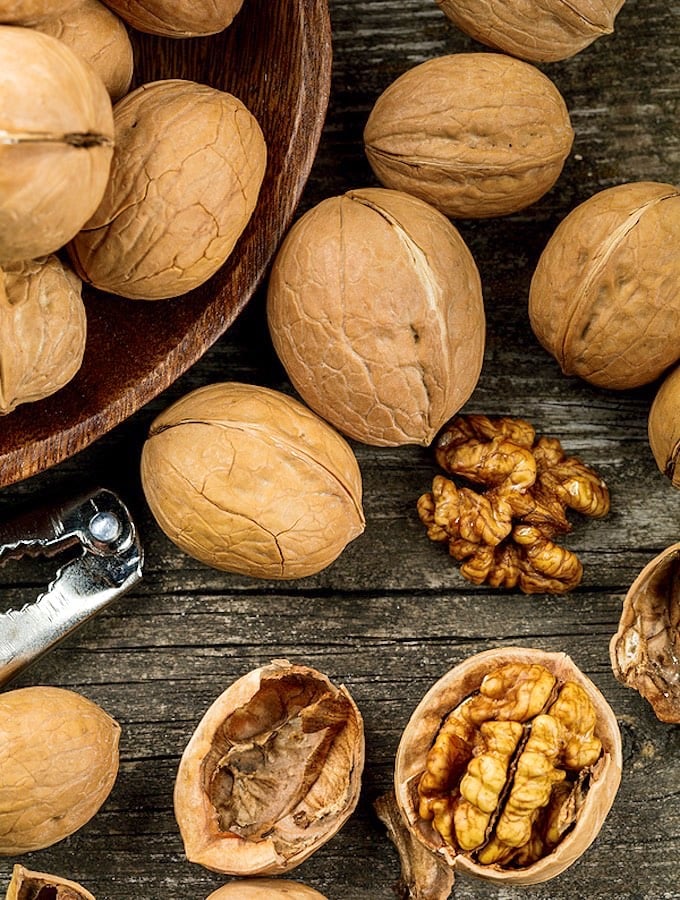 This quick guide to walnuts presents tips, info, ideas, and recipes from one of the most well-loved tree nuts.

The flavor of walnuts is sweet with a slightly bitter undertone, making them compatible with both sweet and savory preparations. On the sweet side, walnuts are used in cookies, cakes, granola, and the like. They’re also useful in salads, stir-fries, grain pilafs, and more.

A brief history of walnuts

The familiar English walnut, so called to distinguish it from the rarely marketed black walnut, is believed to be Persian in origin. English walnuts established themselves in Europe soon after the beginning of the Christian era, then traveled to North America via the Spanish missionaries of the eighteenth century.

The walnut tree found a perfect climatic niche in California, whose walnut industry supplies much of the product marketed in the United States. American, Asian, and Italian cuisines are among those in which walnuts are prized. 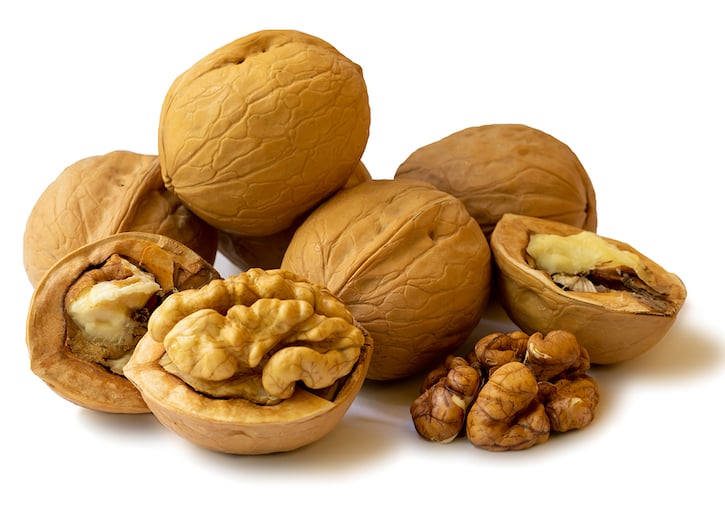 Walnuts are widely available both shelled and unshelled in supermarkets as well as natural foods stores. Despite the sturdiness of the shell, it’s easy to crack with a standard nutcracker.

Since walnuts are high in fat, shelled nuts should be refrigerated if you don’t expect to use them up within 2 months. Keep them refrigerated in any case during the summer. Walnuts in the shell will last for several months unrefrigerated if kept cool and dry. If in doubt, pop in the fridge.

Walnuts rank high in fat content among nuts, at 64 percent. That’s mostly good fat, though —highly monounsaturated, with some polyunsaturates and very little saturated fat. One cup of walnuts contains 780 calories; one ounce contains 182 calories. They are 14 percent protein, or 4.3 Walnuts provide modest amounts of calcium, iron, phosphorus, potassium, and the B vitamin thiamine.

Walnuts are an excellent source of antioxidants. They’re one of the best plant-based sources of valuable Omega-3 fatty acids, certainly best among nuts. Here’s more about the nutritional profile of walnuts.

How to toast walnuts

Walnuts aren’t customarily sold roasted or toasted, but you can do so easily. It isn’t necessary to roast them before using in baking or cooking, but roasted walnuts are nice as a snack or added to salads and grain dishes.

Toasting walnuts brings out more of their flavor if they’re going to be the highlight of a dish. You can toast pecans in the oven or on the stovetop. It doesn’t take long and enhances their flavor and aroma.

In the oven: Scatter the pecans in a parchment-lined baking pan. Bake at 300º F for 10 minutes or so, shaking the pan about halfway through.

On the stovetop: Simple toast pecan halves on a dry skillet over medium heat, stirring occasionally, for 5 to 8 minutes, or until aromatic. 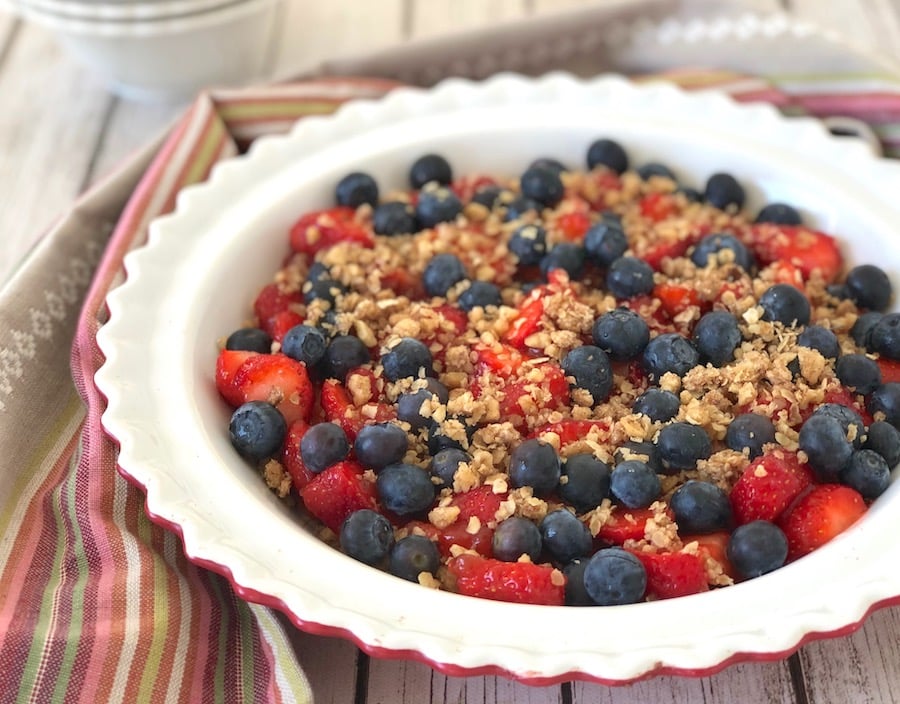 Some ideas for general use

In addition to these general ideas, make sure to see a full listing of recipes in this roundup of 25 Walnut Recipes — Sweet or Savory, and All Vegan.

Pesto: Ground walnuts are a common addition to pesto sauce, which is delicious with pasta, potatoes, or as a garnish for soups (famously, soupe au pistou).

Crumb topping (sweet): Combine an equal amount of finely chopped walnuts with quick-cooking oats, a small amount of sugar, and melted vegan butter in a small skillet. Cook until toasty and use to top muffins and other baked goods before they go into the oven.

Vegetables and grains: Toss a handful of coarsely chopped walnuts over steamed green vegetables such as green beans, broccoli, or asparagus; or toss them into Asian-style stir-fried vegetables, curried vegetables, and grain pilafs.

Grain salads: Add some chopped walnuts to grain salads. Here’s a simple idea: Combine 2 1/2 cups cooked long-grain brown rice with 1/2 cup chopped walnuts, 8 or so ounces of fresh asparagus  (steamed and cut into 1-inch pieces), and 2 scallions, sliced. Toss together and dress in a mild vinaigrette.

Best baking nut: Walnuts are a favorite baking nut, not the least because they retain their crunch, unlike, say, cashews or peanuts. Quick breads, fruit breads, muffins, brownies, and cakes are all familiar baked goods that use walnuts.

In and on hot and cold cereals: Walnuts are a frequent ingredient in crunchy granola and are good for sprinkling on cold as well as hot cereals, like oatmeal. 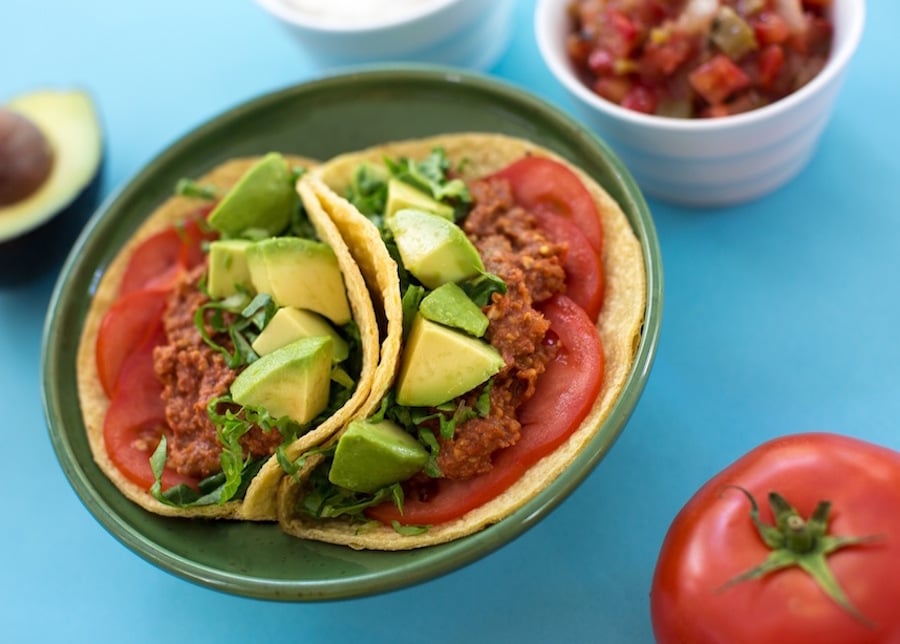