Here’s a guide to chile peppers (alternatively spelled chilis and chilies) — the most common varieties, how to buy and use them, and how to gauge their heat levels. 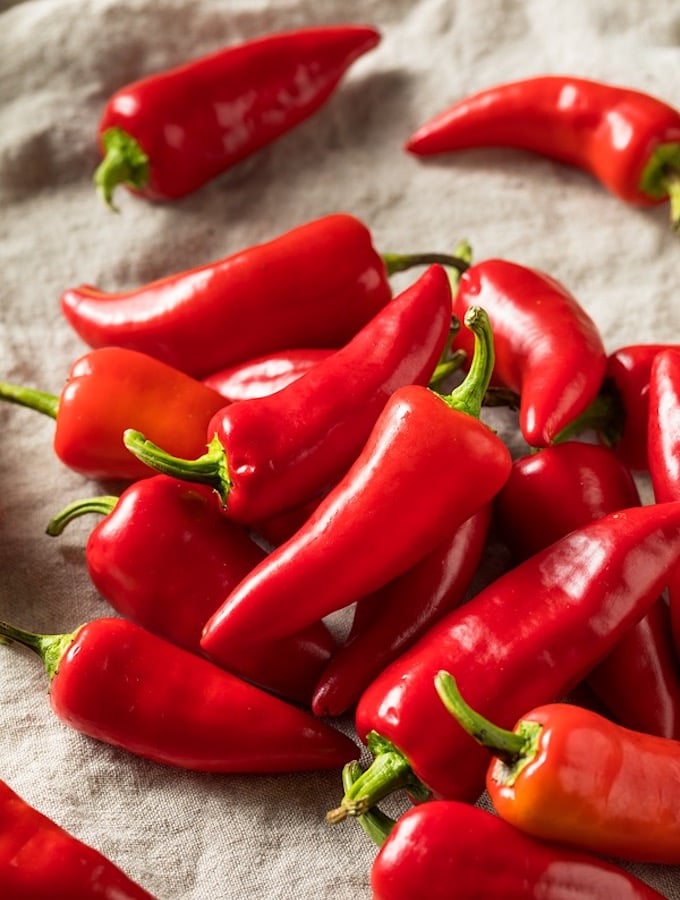 It’s hard to imagine the world’s cuisines without the delectable fiery bite of chiles. But before explorers ventured into the Western Hemisphere in the late fifteenth century, chiles existed only in the warm areas of the Americas.

This excellent information is excerpted and adapted from Melissa’s Great Book of Produce: Everything You Need to Know About Fresh Fruits and Vegetables by Cathy Thomas ©2006, reprinted by permission of Melissa’s Produce.

Choose those that are firm and glossy without shriveling or soft spots. Jalapefios sometimes have “scar cracks” at stem ends, but other varieties should be free of cracks. Refrigerate unwashed and wrapped in paper towels inside plastic bag up to 10 days. 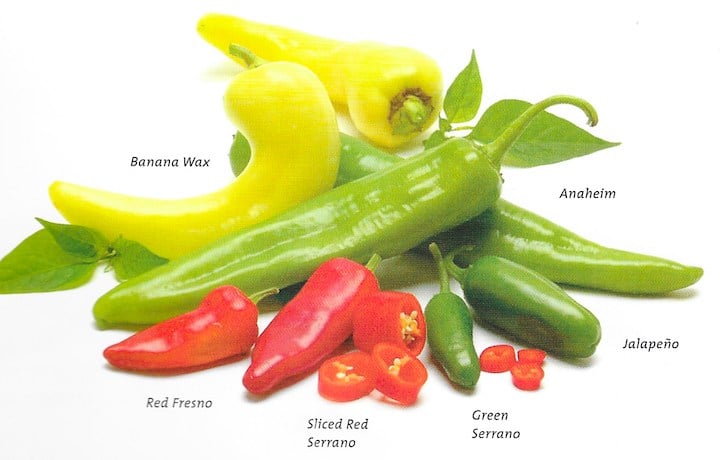 Capsaicin is the incendiary substance in chiles that produces the sensation of heat. Because the amount of capsaicin varies greatly from one Chile variety to another, pharmacist Wilbur Scoville developed a system for measuring a pepper’s power. In this system capsaicin content is measured in parts per million, then converted into Scoville units. One part per million is 15 Scoville units.

Bell peppers weigh in with zero Scoville units, while the habanero registers a scorching 100,000—300,000 Scoville units. It should be noted that chiles of the same variety (even when picked from the same plant) can vary greatly in their hotness.

Cooks with delicate skin should use gloves when working with chiles. Wash hands and work surface thoroughly upon completion and do NOT touch face or eyes. To use raw, remove stem. Most often, recipes advise the removal of seeds and veins to reduce heat; cut Chile into quarters

lengthwise, then cut out veins and seeds. Cut into desired shape.

To roast small chiles: Place in dry skillet on medium heat, turning until sporadically blackened and slightly softened. Most often small roasted chiles are not peeled.

To roast larger chiles: Use barbecue, gas flame, or broiler. Place on hot grill or flame from gas burner, turning with tongs as they blister. Or, under broiler, place on rimmed baking sheet and broil, about 6 inches below heated broiler element, turning as they blister (note that chiles roasted in oven have softer texture). Either way, when blistered and moderately blackened, place in a bowl or on a plate and cover with plastic wrap or kitchen towel, or place in plastic bag. Let sit 5 minutes, then uncover.

To peel and seed after roasting: Wear rubber gloves if hands are sensitive. When cool enough to handle, peel skin (or rub off skin if easier). Core with small knife, cut in half, and scrape out seeds. If necessary, rinse briefly with cold water, but water rinses away delicious juices. Sometimes, a moist hand can remove loose debris. Holding Chile in sink (but not under running water), rinse hand and run wet hand over surface. Repeat until seeds and skin are removed. Cut into desired shape. Can be refrigerated airtight up to 2 days, or frozen.

Use in salsas, bean salads, and sauces. Use in curries, stews or casseroles. And remember to add small doses to dishes; taste, then add more as needed. It is easier to add than subtract.

A trio of delicious sauces

Salsa and black bean dip: In a bowl, toss 1/4 cup finely chopped red onion with 4 diced medium tomatoes, 2 teaspoons fresh lime juice, splash of balsamic vinegar, 1 to 2 minced (seeds and veins removed) jalapeño chiles (or use serrano for a hotter version). Toss. Drain and rinse a 15-ounce can of black beans; add to mixture. Add 4 tablespoons of chopped cilantro. Toss and add salt to taste. Serve with tortilla chips, or on tacos or quesadillas.

While this isn’t an exhaustive list, here are some common varieties you’re likely to encounter in global groceries and farm markets. 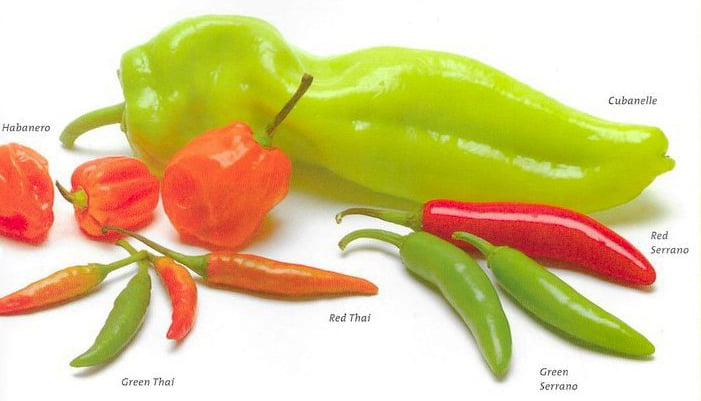 CUBANELLE, HUNGARIAN WAX: These two chiles are very similar and are often marketed interchangeably. In the Southeast, marketed as Cubanelle; on the West Coast, marketed as Hungarian Wax. Elongated and tapered, about 5 – 7 inches long. Greenish-yellow skin and thick flesh. Scoville units: 500 – 1,000. 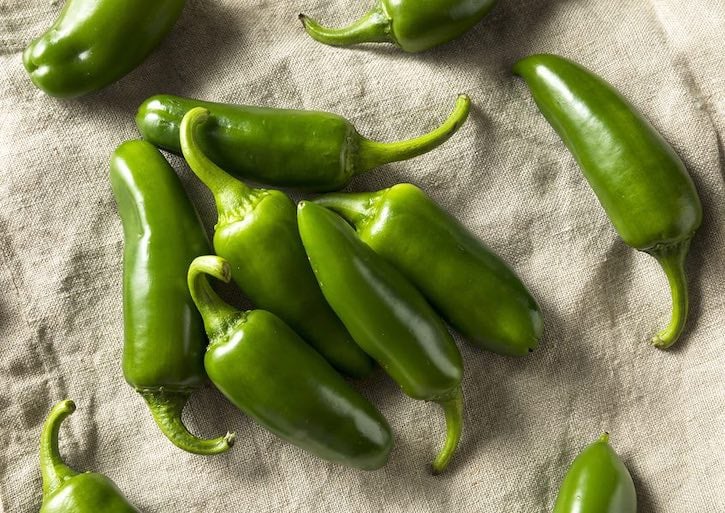 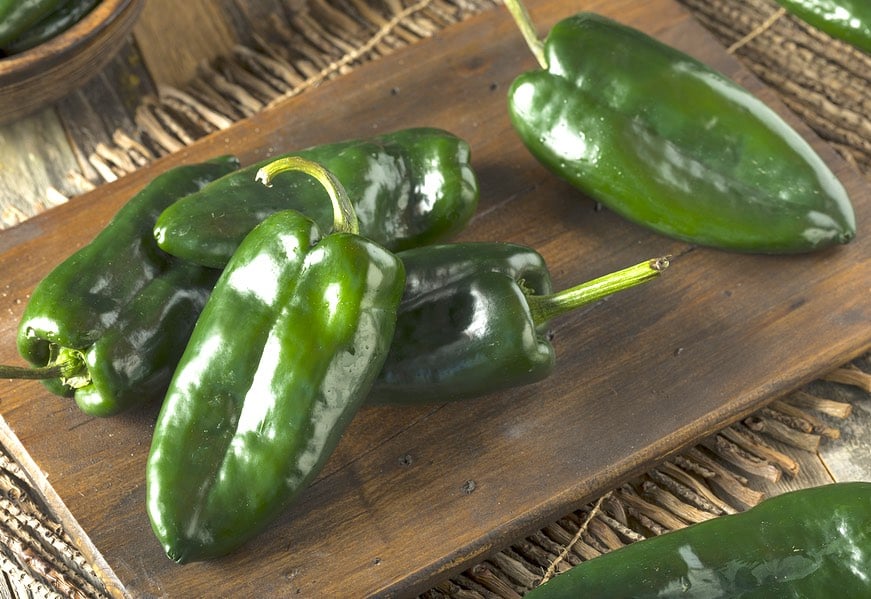 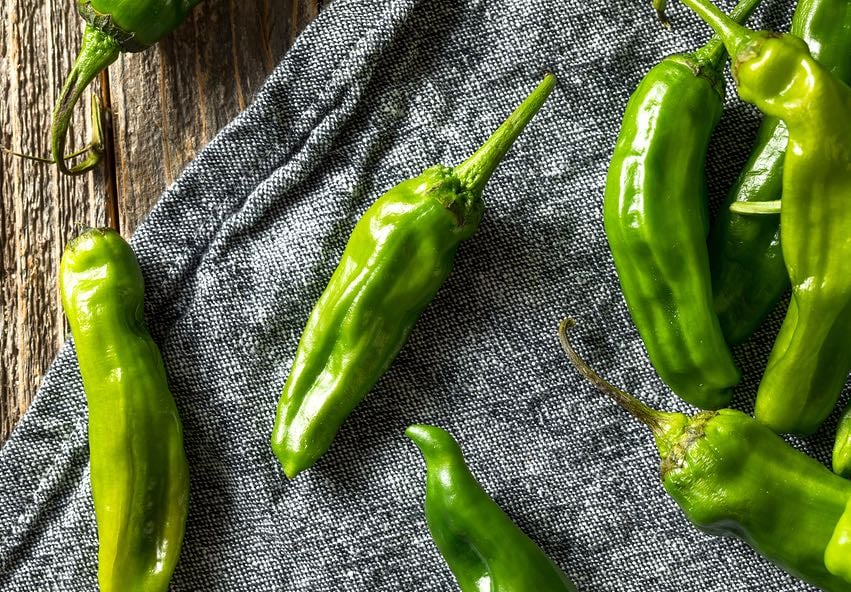 SHISHITO: This small Asian chile pepper (known as kwari-gochu in Korea) has become popular in the West, just in the last few years. A very mild pepper with a medium-green, wrinkly skin. Scoville units: 100 – 1,000.