This concise guide to bulgur, or pre-steamed cracked wheat, tells you what it is, how to buy and store it, and how to cook and use it. Bulgur is produced by parboiling whole wheat berries, which are then dried and cracked. 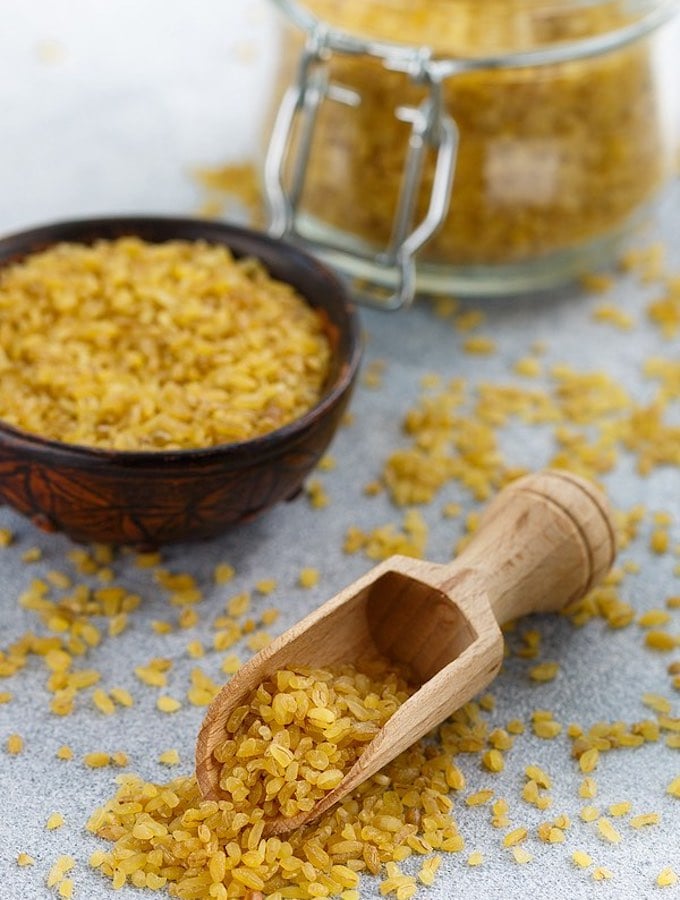 The origins of this versatile wheat product can be traced back to the ancient Near and Middle East, when legend has it that bulgur was cited as a favorite delicacy of the conquering armies of Genghis Khan.

Today, bulgur is best known for its use in Near and Middle East cuisines, with tabbouli (alternatively spelled tabbouleh) salad perhaps the most well-known recipe, but it has made its way into all types of recipes.

Not to be confused with cracked wheat: Cracked wheat is quite similar to bulgur, and indeed, they come from the same source — wheat berries. But cracked wheat is not pre-steamed, and so it doesn’t cook nearly as quickly as bulgur does. The size of the grind of bulgurcan vary, and the hue is a golden brown or tan.

Bulgur is wheat, so those with wheat intolerance, allergy, or sensitivity needs to avoid this food altogether. 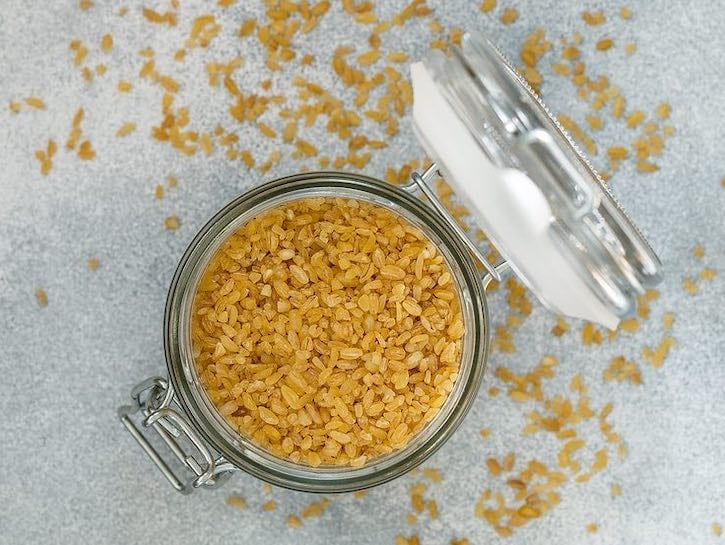 Is bulgur good for you?

Bulgur retains much of the original nutritional value of the whole berry. When cooked, it has a chewy texture and slightly nutty flavor that you might compare with brown rice.

A cup of cooked bulgur has 150 calories, 6 grams of protein, 8 grams of fiber, a host of B vitamins, especially folate, B6, and niacin. It’s a good source of iron and magnesium, and an excellent source of manganese. Bulgur is fairly comparable to brown rice in terms of nutrition, though it beats out rice in terms of fiber, has slightly more fiber, and fewer calories. Learn more about the nutritional profile of bulgur.

The most economical way to buy bulgur is in bulk, and you’ll find it in most any natural foods store. It’s also occasionally sold in pre-weighed packages.

Bulgur has made its way into packaged mixes for tabouli and pilaf, which are available in natural food stores as well as the grain sections of many supermarkets. Not surprisingly, this is the priciest way to purchase bulgur with the smallest yield, but if you’re in a hurry and want a tasty pilaf, this is a convenient way to enjoy it.

The best way to store bulgur once you get it into your kitchen is in well-sealed jars, or something similar, such as mason jars. Stored in a cool, dry place, bulgur will keep well for several months. But like other whole grains its prone to rancidity (and occasionally grain moths), so it’s best to refrigerated it during warmer months if you don’t plan to use it up quickly. 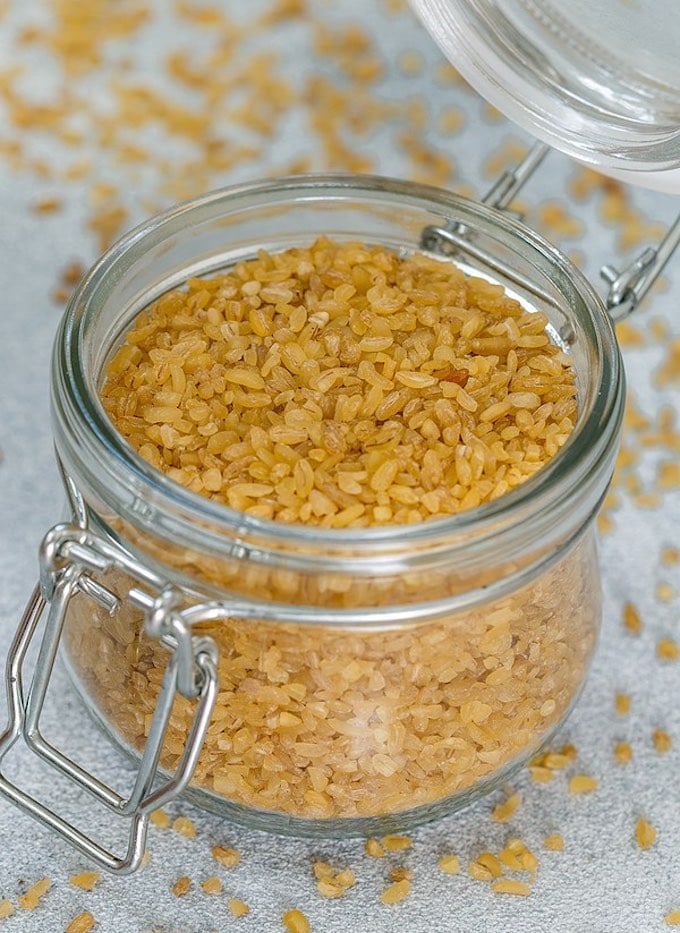 How to cook bulgur

Before cooking, to heighten the nutty flavor of bulgur, toast it first in a heavy skillet, either dry or with 1 tablespoon oil for every cup of grain used. Stir over moderate heat until it turns a slightly deeper shade of brown and becomes aromatic. This step is entirely optional.

Bulgur may be cooked in two ways. The more common is simply to place the grain in a heatproof, deep casserole dish and pour boiling water over it in a ratio of 2 to 1 — for example, 2 cups water to 1 cup bulgur. Cover the dish and let stand about 30 minutes, or until the water is absorbed. Fluff with a fork.

The other way is to combine 2 parts water to 1 part grain in a saucepan. Bring to a slow boil, then lower the heat and simmer, covered, until the water is absorbed, about 15 to 20 minutes. 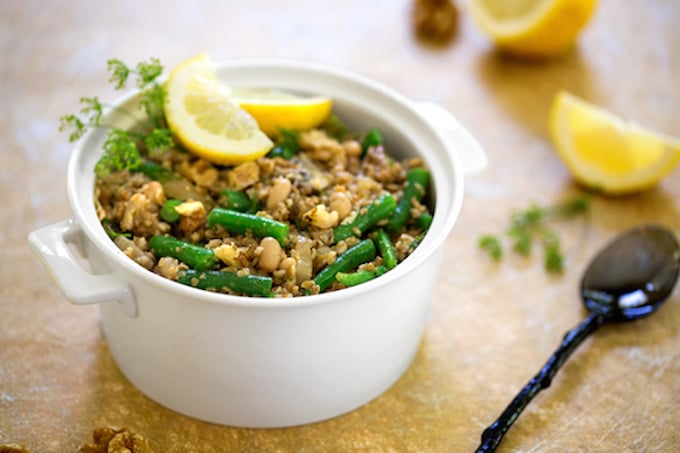 Ways to use bulgur — and links to some recipes

The following list suggests only a few of the ways in which this convenient and versatile grain may be used.

A pilaf classic: Simple bulgur pilafs can be made by sautéing any combination of onions, peppers, mushrooms, broccoli, carrots, cauliflower, and/or leafy greens and adding cooked bulgur. Good seasonings include cumin, za’atar, Italian seasoning, and/or herb and spice blends (like Mrs. Dash). See the recipe above. Another one to try is Bulgur Pilaf with Green Lentils.

Grain and bean pairings: Bulk up your pilafs with a smaller quantity of cooked or canned (drained and rinsed) beans.

A bed of grain: Use bulgur as a bed of grain as a change of pace from rice for vegetable stir-fries and stews or for bean dishes and chili.

Tabbouli (sometimes spelled tabbouleh: As mentioned at the top of this post, tabbouli is arguably one of the best-known uses for bulgur. Tabouli is a salad that combines the cooked grain with tomatoes, scallions, parsley, olive oil, and lemon juice. Sometimes olives or cucumbers are added. Try this Easy Bulgur Tabbouleh. 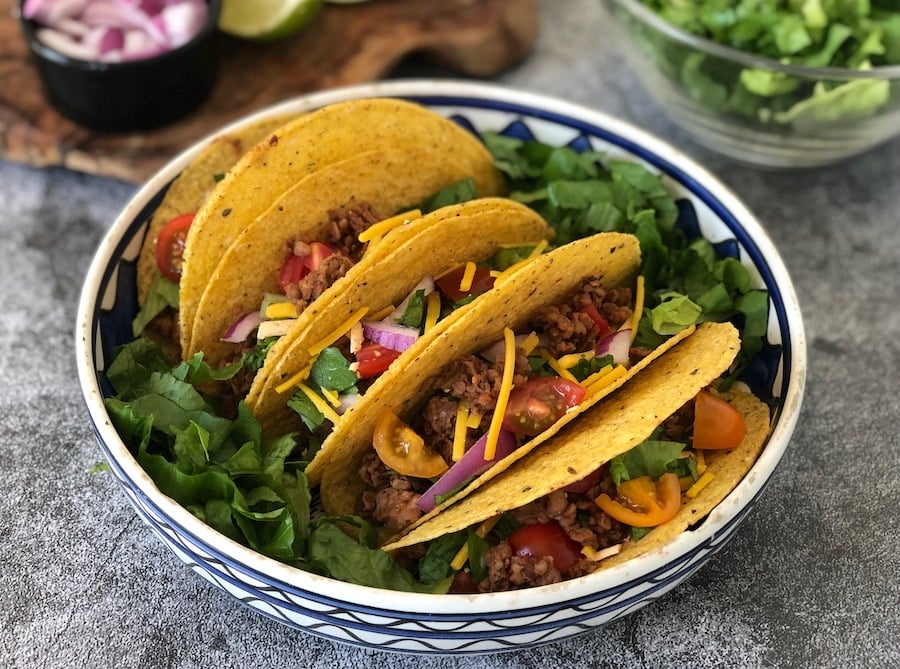 “Beefy” crumbles: The texture of bulgur is a fantastic starter for hearty plant-based crumbles to use in tacos, pasta dishes, casseroles, and more. Try the Walnut & Mushroom Beefy Vegan Crumbles (this recipes has both a bulgur and quinoa variation), above.

Plant-based meatloaf and meatballs: A terrific grain for making meatless versions of these classics. Try these Easy Vegan Meatballs.

Top with the sautéed rings of one large onion and sautéed diced eggplant pieces (from 1 large eggplant), sliced tomatoes, and 1 to 1/2 cups vegan cheese shreds (mozzarella- or jack-style). Bake for 20 minutes at 375ºF, or until the cheese is well melted,

A breakfast grain: Take some cooked bulgur (plain leftovers are perfect for this) and cook it a little further in a small amount of plant-based milk to make a hot breakfast cereal. For every serving (3/4 to 1 cup cooked bulgur), cook in about 1/3 cup plant-based milk until nearly absorbed. Stir in a little of your favorite liquid sweetener and embellish with dried fruits, chopped nuts, and a sprinkling of cinnamon.

Photos of bulgur at top of post by La_Vanda/Bigstock.