Edamame, or fresh green soybeans, resemble lima beans, but that’s where the comparison stops. They’re smoother, more flavorful, and richer in nutrients. This guide to edamame has all the info and tips on how to cook and enjoy a high-protein soy food (with links to recipes) that’s as useful as it is tasty. 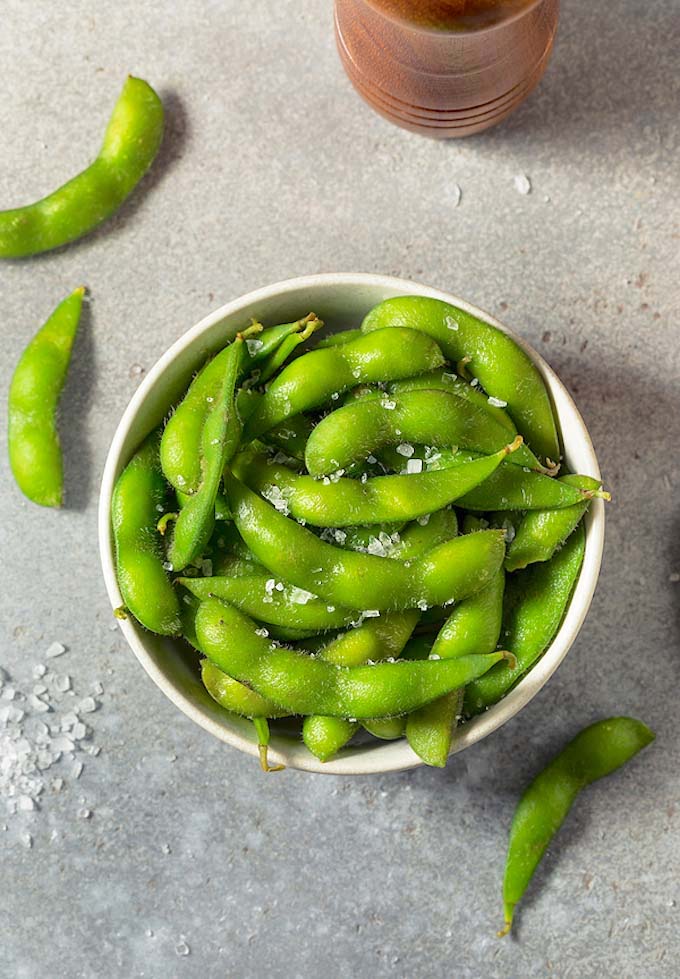 No visit to the sushi bar would be complete without a round of edamame. Served warm with a light sprinkle of salt, a splash of fiery chili oil, or a pungent dose of toasted garlic, this simple starter has become as essential to the experience as the sushi rolls themselves.

You might see bowls of the green pods served as bar snacks, in place of conventional peanuts or pretzels served between rounds of beer and sake, even when no other food is offered. Even mainstream salad bars rely on them as a fundamental mix-in where alternative protein options might be scant.

While edamame has become an increasingly familiar part of the plant-based diet, it’s a food that rarely get the praise or attention it deserves. Let’s take a look inside the pod to better understand our love affair with this Asian import. 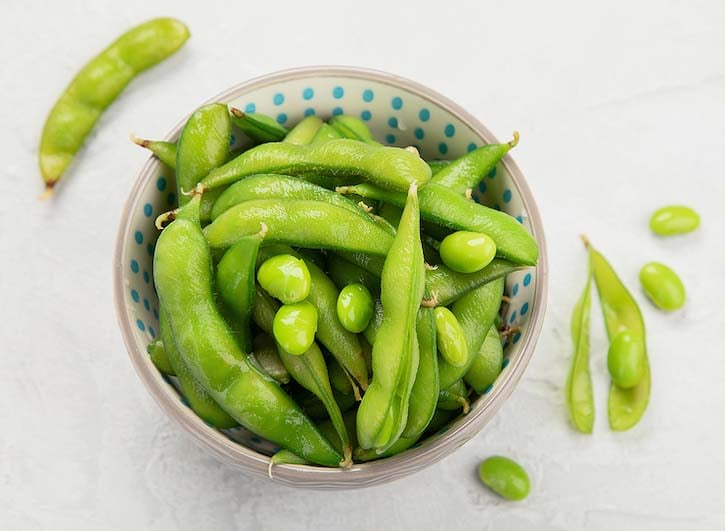 How to Buy and Store Edamame

Edamame can be found fresh in some groceries, but are most commonly available frozen. You’ll find them in the frozen vegetables section of well-stocked supermarkets. They’re sold both in the pod, which is best for snacking, or shelled, which is easier to use in recipes.

In warmer months, you might find edamame sold fresh in the pods at farmers markets. The pods should be firm, plump, and bright green. Yellowing or browning pods are a sign that the beans inside have started to mature, at which point the beans become starchy and much less sweet.

Store in the refrigerator for no more than three days, but the sooner you enjoy them, the better.

Dried edamame is also available as a shelf-stable snack, similar to corn nuts, but with a much bigger protein punch. These are typically found with peanuts or “superfood” snacks at specialty stores in salted and unsalted varieties. 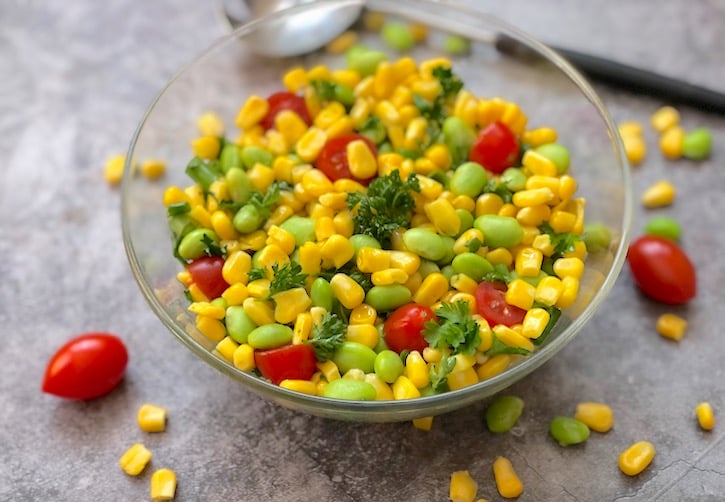 What is Edamame and Where Did it Come From?

Though closely associated with Japan, edamame was first cultivated in China over 7,000 years ago. They’ve been domesticated in many surrounding countries since then, including Thailand, Korea, and beyond. The United States is now the largest producer of soybeans worldwide, but only a fraction of that amount is eaten as fresh edamame.

Common definitions describe edamame as “immature soybeans,” but that doesn’t mean they’re unripe or not fully grown. Conventional soybeans, harvested to make soymilk and soy sauce, are simply left on the vines longer until the pods open and the beans inside are yellow and dry.

Edamame pods are cut from the branch before that stage, while still green and supple. This explains their name, which is translated from Japanese as “branch beans.” 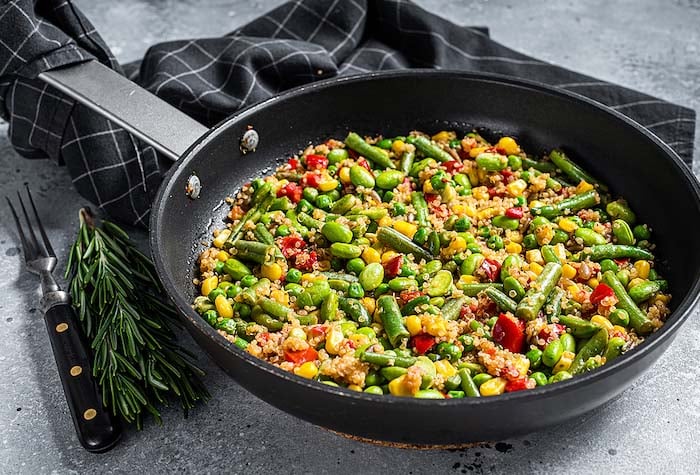 How to Cook Edamame

Some edamame sold in the pod don’t even need to be removed from the packages to start cooking. Check to make sure the freezer bags are microwave-safe, and you can simply toss them in to steam for 4 to 6 minutes until hot and tender all the way through.

Simmering on the stovetop is a great alternative to using a microwave, but don’t forget to add salt, since any included will be washed off. For greater depth of flavor, the pods can be roasted, grilled, or wok-charred, too.

Only the fresh beans inside the pods are edible. To shell them for use in recipes, you can squeeze the pods between your fingers and the beans will pop out. For snacking, it’s easy to scrape them between your teeth, which also imparts more seasoning into each bite. Discard or compost the shells since they’re too fibrous to digest. 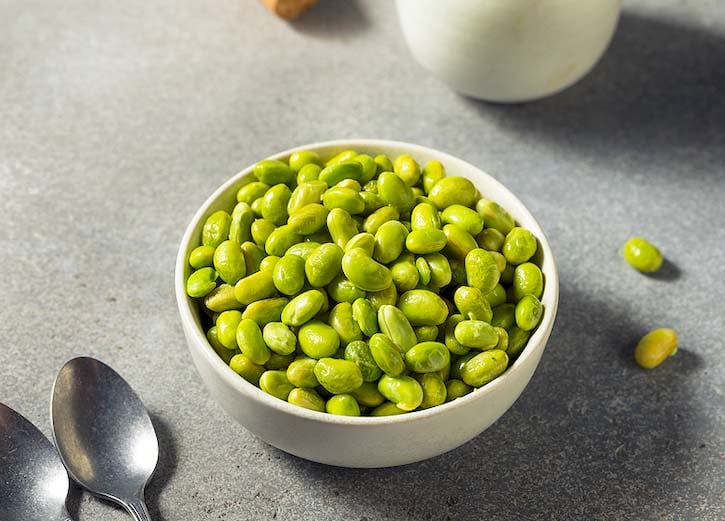 Edamame is best known for its protein prowess, and for good reason. It contain all 9 essential amino acids, which makes them a complete protein. 1 cup of cooked edamame contains 31 grams of protein — almost twice as much as other legumes.

When it comes to micronutrients, edamame has even more to offer. They’re also high in folate, manganese, and Vitamin K, and is a great source of iron, magnesium, thiamin, phosphorous, potassium, and copper. It’s fair to say that edamame is a superfood, as proven by this complete nutritional profile here. 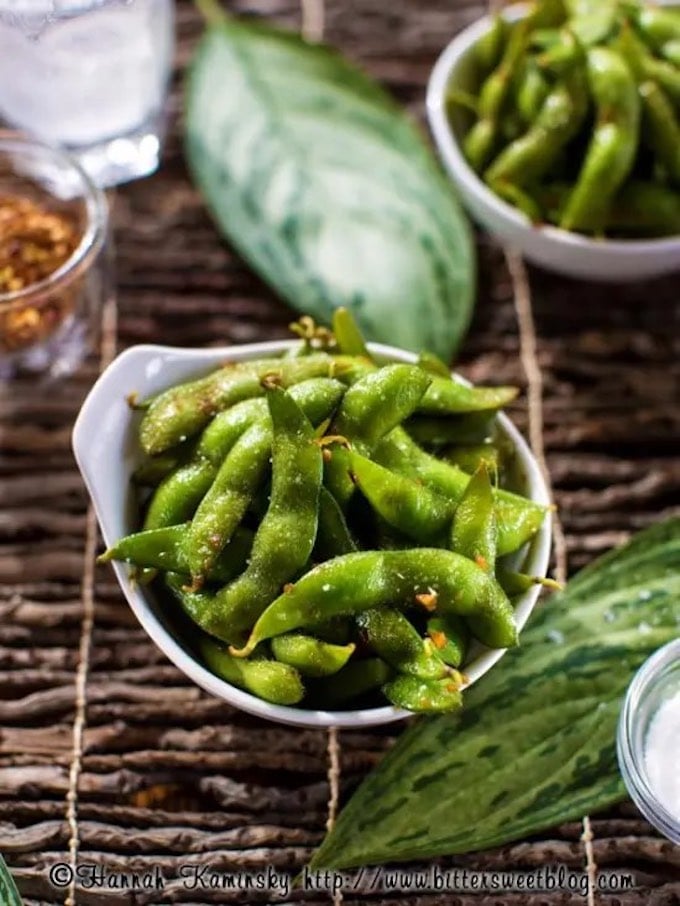 Appetizer or snack: Freshly cooked edamame, served in their shells (which has been lightly salted) is a common appetizer served in Japanese restaurants, so why not serve it at home? It’s fantastic served just as is, but if you want to go a step up in flavor, try Soybean Poke (see photo, just above). And if you’re big on snacking, you’ll want to learn how to make Crispy Roasted Edamame (but skip the regular Parmesan suggested in the latter, and sprinkle the the roasted edamame with nutritional yeast.

Salad: Toss a handful of shelled edamame into any leafy green salad for some extra protein and additional satiety. They have such a mild, agreeable flavor that they pair well with any dressing. See the photo and link to Corn and Edamame Succotash Salad for a lively change of pace from the usual salad fare, here’s Mediter-Asian Couscous Salad.

Grain pilaf: If you usually add green peas into your pilaf, try replacing them with edamame. You don’t need to change the procedure or recipe one bit, but you’ll get a higher protein side dish with a more toothsome texture.

Grain bowls: Top Buddha bowls with a pile of tender shelled edamame along with your favorite vegetables and sauces for an instant protein infusion. You can mix them into the grain itself too, for fun and exciting bites throughout the meal. Consider this colorful recipe: Spring Grain Bowls with Edamame, Bok Choy, and Oranges.

Soup: Add more color to your minestrone by tossing in a handful of shelled edamame or create a creamy bisque using them as the base. You can use them in most any brothy Asian-style soups as well, like this Hot and Sour Edamame Soup.

Dips and spreads: Start with your favorite hummus recipe and simply swap all or part of the chickpeas for cooked edamame. Blend for a few extra minutes or use a high-speed blender, since edamame tend to be a bit firmer and more resistant to blending smoothly. You can also combine cooked, blended edamame with avocado for a high-protein guacamole, or try cross-cultural flavors in a flavorful Edamame Hummus.

Stir-fries: For a change of pace from tofu, swap in edamame as a whole food plant protein. It needs no further prep after being shelled. Just toss a cupful or two into the stir-fry pan near the end of cooking for them to get a light char on the outside.

Pasta salad: Shelled edamame remain firm and hold up well over time, even at room temperature, which makes them a perfect guest to invite to any picnic. Add them to your favorite pasta salad to enhance the nutrition and flavor. Here’s an easy Edamame Pasta Salad.

Tacos and burritos: Wrap up whole or roughly chopped edamame in soft tortillas, big or small, along with all your favorite fixings for some fun fusion food! Add taco seasoning for a classic Mexican flavor or go all out with Asian inspiration using sriracha instead. Here’s a recipe for Crispy Edamame Tacos, filled with fusion flavors.

Trail mix: Dried edamame, which is the crunchy version of the fresh variety (comparable, let’s say, to soy nuts) is a great addition to any mix of nuts and dried fruits. Measure individual servings into zip-top bags for portion-controlled snacks that are ready to go whenever you are. 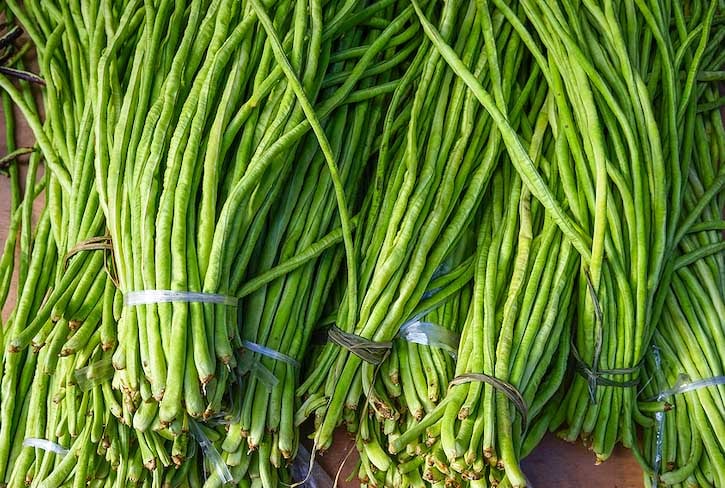 A Guide to Chinese Long Beans