The use of maca root has grown well beyond its South American origins. It has become widely available, mainly in the form of maca root powder, which is closest to its whole food source. In this guide to maca root, you’ll find answers to frequently asked questions about this superfood. 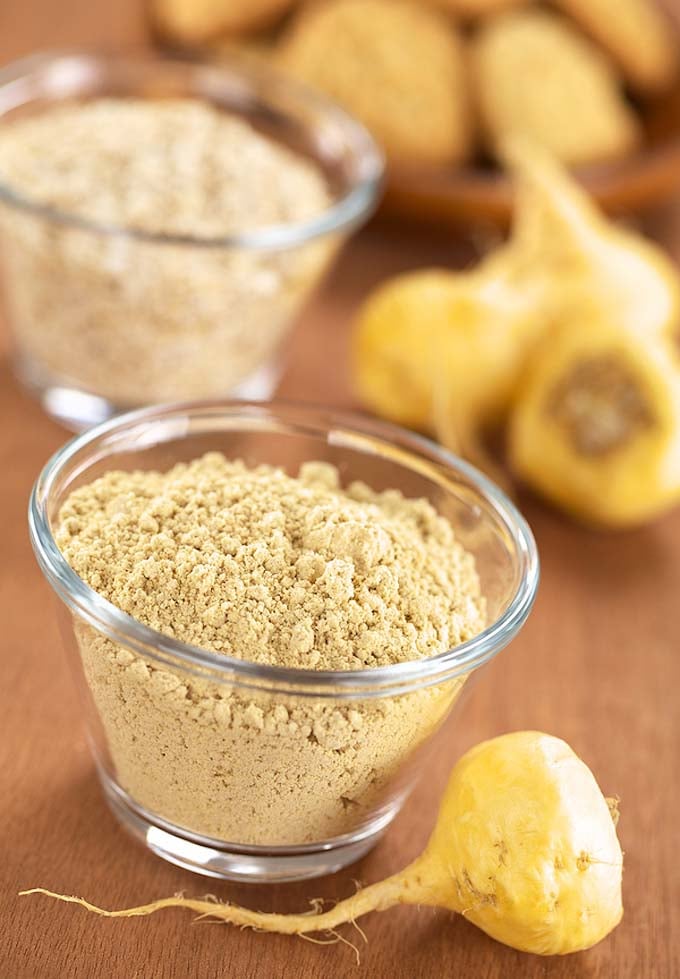 What is maca and where does it come from?

Maca is a root vegetable (alternatively referred to as a tuber) that’s a distant cousin of the radish family. A member of the species Lepidium meyenii, it has been grown in the mountains of Peru and Bolivia for millennia. Maca’s benefits have long been valued by indigenous cultures in these countries. More recently, its use as a superfood has spread worldwide.

Maca root grows in a type of soil that is found at high altitudes, mainly in the Peruvian Andes of South America. The exceedingly harsh conditions, extreme temperatures, and hard, rocky soil in which maca grows all contribute to the incredible concentration of vitamins, minerals, and other nutrients found in it.

Peruvians and other South Americans have been using maca for thousands of years. Legend has it that Inca warriors ate maca before going into battle to increase endurance and strength.

In its indigenous lands, maca has been long revered and used for a wide range of medicinal purposes in addition to its purported benefits for energy, libido, fertility, and memory. A traditional fermented beverage, Maca Chicha, is one of the beloved uses for the root, though the recipe is a bit too complicated to present here.

Where can you buy maca?

Most of the maca root distributed commercially comes from Peru. Once the root is harvested, it’s dried, then ground into a powder. This comes to market in small pouches or packages. Maca is also available in liquid, capsule, and tablet form. However, the powdered root is the closest to its natural form and is the most preferable.

Look for maca at your local natural foods store. If they don’t carry it, ask if they’ll special order if for you. You can also shop online. Amazon, for example, carries many brands; there you can see reviews, and look over answers to reader questions by the companies that sell maca — even if you don’t end up buying from Amazon.

Maca can also be purchased directly from distributors like The Maca Team — this website also has a lot of useful information). It’s best to buy maca labeled Fair Trade, which helps to ensure that those harvesting and processing it are paid living wages and work under fair labor practices.

Maca root comes in three major varieties — red, yellow, and black, all a bit different from one another. This article describes the differences between the various types. Choose according to what seems best for you. The yellow variety is the most common, as well as the easiest to incorporate into foods and beverages. 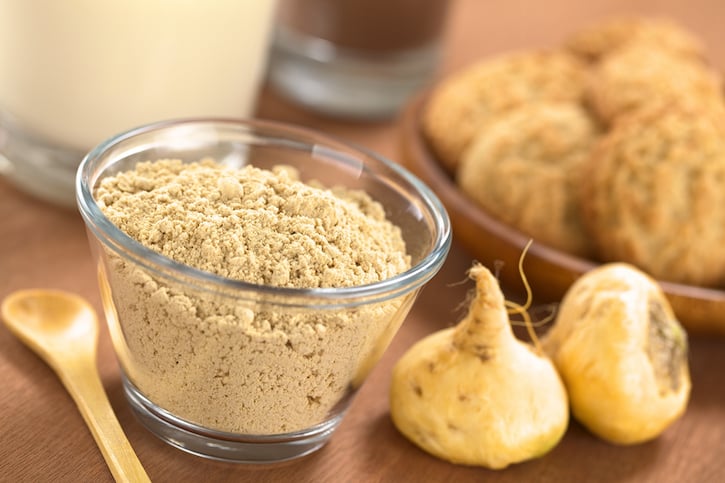 What are some of the benefits of using maca?

As a general tonic and adaptogen, maca has been touted as a food that can help the body manage stress, boost immunity, and balance the various internal systems. It’s also valued for its supposed abilities to enhance libido and increase strength and stamina in athletes and active people. In traditional societies, maca was used to treat anemia, increase fertility, and prevent and treat disease.

These are quite a lot of claims! Please be aware that other than the benefits provided by the vitamins, minerals, and multitude of other nutrients verifiably contained in maca, other reported benefits (while widely accepted) are largely anecdotal. Though maca has a long and illustrious history as a means to improving vitality and well-being, claims that it can cure serious ailments or diseases should be regarded with a great deal of caution.

Many regular users of maca use it for increasing stamina and endurance, which is why some athletes take maca for peak performance. When used in conjunction with a good workout regime, supplementing with maca may help to preserve muscle mass.

Other benefits often mentioned but which are more anecdotal include improvement of sexual function and libido; relief of menstrual issues and menopause; mental energy; skin health; mood balance; and hormone balance. There are a lot of claims for maca above and beyond the nutrition facts; do your research with a skeptic’s eye and with the placebo effect in mind.

The widespread interest in maca has led to some actual studies. The National Institute of Health has conducted one such study of maca, too extensive to quote here, but it’s worth reading if you’re looking to incorporate maca regularly. Some of the claims made about the benefits of maca show promise, while others may be overstated. There are areas, as the study notes, that deserve a closer look.

While certain benefits are being studied, and others remain anecdotal, there’s little doubt about maca as a nutrient-dense superfood. A rich source of vitamins, minerals, enzymes, amino acids, and antioxidants, it’s an especially bioavailable source of calcium and magnesium — great for bones and teeth.

Other minerals, in varying amounts, include zinc, iron, manganese, silica, and phosphorous. It’s also one of the few non-animal sources of B-12, which is good news for vegans. It’s also rich in other B vitamins and vitamins C and E, high in fiber, and contains beneficial fatty acids.

A tablespoon of maca contains only 60 calories, and the fat content is nearly zero. Here’s a detailed look at the nutrition data of maca.

How does maca taste?

Maca root powder has a distinct flavor that’s been described as malty or having a hint of caramel. It has also been called nutty and tasting of  butterscotch. Though maca isn’t sweet, there’s something about its flavor that makes it more compatible with sweet preparations, including beverages, unbaked cookies and bars, smoothies, and cereals. You’ll find some easy ideas of ways to use it, ahead. 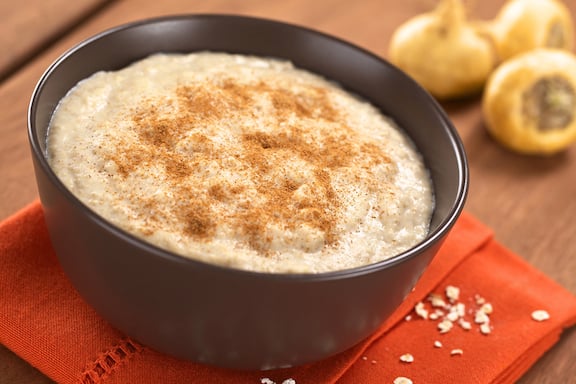 What are some ways to use maca?

There are lots of easy ways to incorporate maca into food and beverages. It’s best to use it in its unaltered state, that is, without much if any cooking or baking. That way, more of its nutrients remain intact and bioavailable. 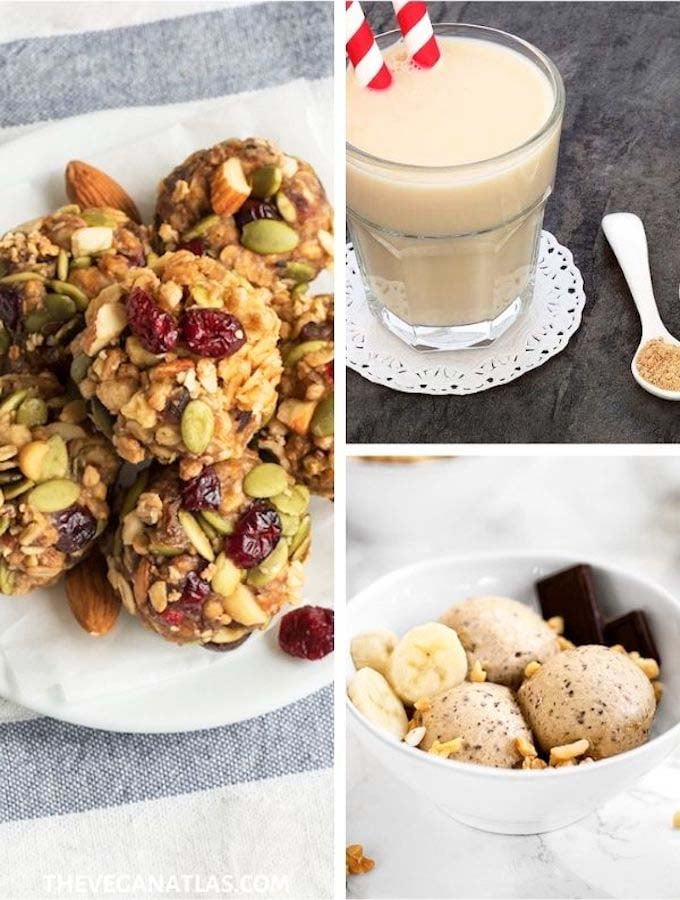 What is a serving size?

When first starting to use maca root powder, it’s best to begin by taking smaller amounts and building up; as little as 1/2 teaspoon is a good place to start. One tablespoon of the powdered root is an average daily dose. Up to two tablespoons a day is fine too, depending on body weight.

Though maca is a naturally grown root, it’s a powerful superfood and should be used in moderation. It’s often suggested that if you use it daily and consistently, it’s good to take a break from it for one week of every month. If you use it only occasionally, rotating on and off, or two to three days of the week, this isn’t a concern.

Maca is stimulating, so it’s best to use it during the day when you want to get revved up, rather than in the evening, when you want to be winding down. There are no hard and fast rules. Maca isn’t an all-or-nothing proposition. Use it regularly, or once in a while, as you prefer. 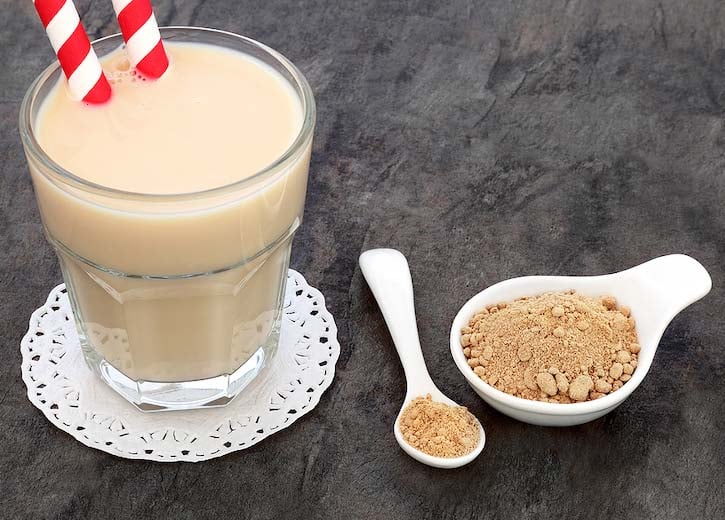 Are there any precautions?

In its long history of use, maca has shown no adverse side effects or toxicity. This has been confirmed by the National Institute of Health study referred to above. I

If you’re just starting to use it, or use too much at once for your body weight, maca can make you feel jittery, almost like having too much coffee (though maca doesn’t contain caffeine). As with many good things, maca should be used in moderation, balanced with other natural foods.

Stomach upset: Some maca users have reported stomach upset, heartburn, and indigestion, though this isn’t a common occurrence. Though unpleasant, these effects aren’t harmful and will pass. If maca disagrees with you to such an extent, listen to your body and don’t use it! There are many other superfoods to explore.

Thyroid issues: Raw maca contains iodine and other goitrogens, which can irritate the thyroid. Maca labeled “gelatinized” (more about that later) has been cooked, which mitigates those substances. If you have thyroid issues, you should consult a Registered Dietician before using maca. Traditional MDs are less likely to be familiar with it.

Most of the major maca brands sold are organic and non-GMO. If this is important to you, make sure this is stated on the label of the brand you choose. It’s naturally vegan and gluten-free.

It depends on how you look at it. The price of various brands varies, though not wildly. As of this writing, a one-pound bag of raw (not gelatinized, which is a bit costlier — this is explained just ahead) from one distributor is a little over thirty dollars.

That may sound pricey. But it’s calculated that the cost of taking a tablespoon for 50 days is less than 60 cents per serving (not including the shipping cost). If you feel your overall well-being benefits from maca, then this starts to sound reasonable.

What are the varieties of maca?

Maca comes in a variety of colors — yellow (sometimes called blond), red, and black. There isn’t a world of difference between them, but it’s generally accepted that the deeper the color, the more potent it is.

What variety of maca you prefer is a matter of personal choice; they’re fairly interchangeable.

What is gelatinized Maca?

In this case, the term “gelatinized” simply means that the root has been cooked before being dried and pulverized into powder. There’s no gelatin involved! This is closer to how Peruvians have prepared the root for many centuries. In this way, many of the nutrients become more concentrated and bioavailable. For some people, this kind of maca is also easier to digest. This is due to the reduction in starch level, which makes it less likely to cause stomach irritation.

Many brands of maca are labeled “raw,” though that’s not completely accurate; the roots are heated, but usually not over 115º F (45º C). The argument for this kind of maca is that the enzymes some of the micronutrients are preserved that cooking (gelatinization) destroys.

Since maca is taken in small quantities, using the so-called raw variety shouldn’t cause issues, but the gelatinized type is best for those who have taken raw maca that has disagreed with them. These pros and cons aren’t major, and unless you have a very sensitive stomach, the choice is yours.

How long does maca powder last?

Once you open a package of maca powder, it can be kept at room temperature for many months, but it doesn’t hurt to refrigerate it. That way, it keeps almost indefinitely (though you’ve purchased it to use, not to just linger in the fridge). Keep the packaging sealed up well. You can also freeze a well-sealed package of maca if you know you’re going to be away for a while and won’t be using it.