A quick guide to fennel, a unique vegetable with an anise flavor and celery-like texture — how to buy, prep, and use it in recipes. Sometimes markets label fennel as “anise” or “sweet anise,” both are misnomers. 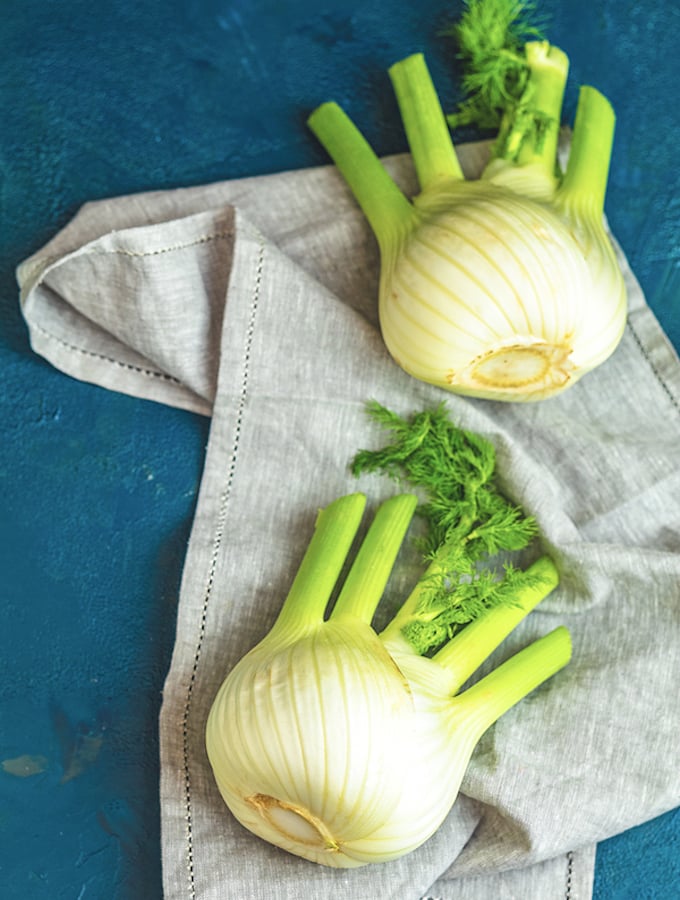 Because it has its feathery, dark green tops, it’s sometimes mistaken for dill. Fennel is a green-tinged, almost white bulb with green celery-like stalks sprouting at the top. The stalks are adorned with fernlike, dark green leaves.

Called finocchio in Italian and fenouil in French, this aromatic vegetable is an essential ingredient in many mouthwatering Mediterranean dishes.

This information is excerpted and adapted from Melissa’s Great Book of Produce: Everything You Need to Know About Fresh Fruits and Vegetables by Cathy Thomas ©2006, reprinted by permission of Melissa’s Produce. For those who love to cook with fennel, or want to use it more often, there’s more to learn than you imagine! 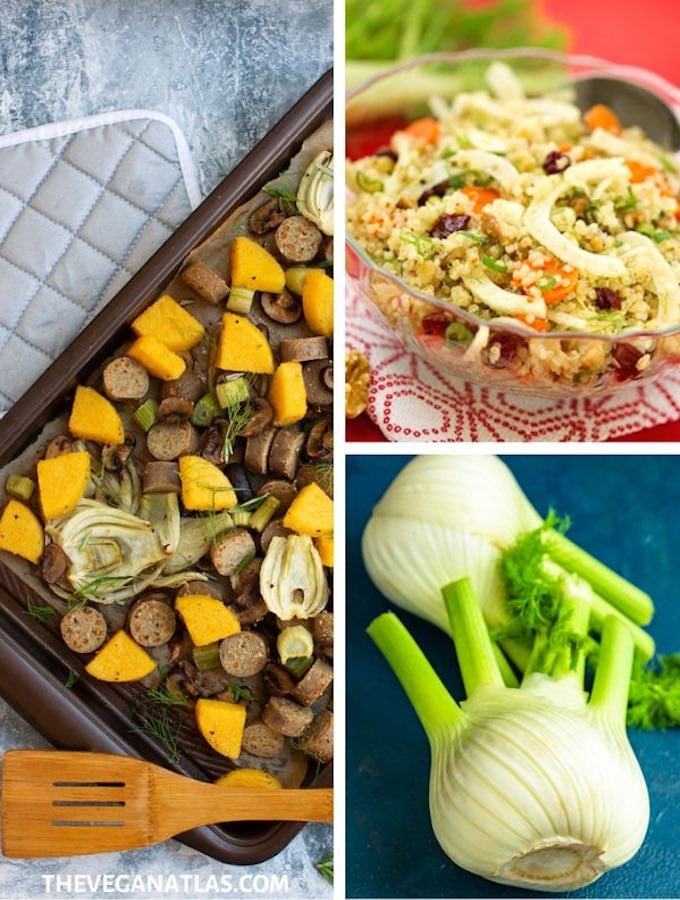 Generally, the true season for fennel is fall and winter. Choose bulbs that are unblemished, without yellowing or browning; should be fragrant, firm, and rounded. Green feathery leaves at top should be bright green and not wilted.

Refrigerate, unwashed and dry, wrapped in plastic bag up to 5 days. Baby fennel is more difficult to find; sometimes available in markets with large specialty produce items, or farm markets. 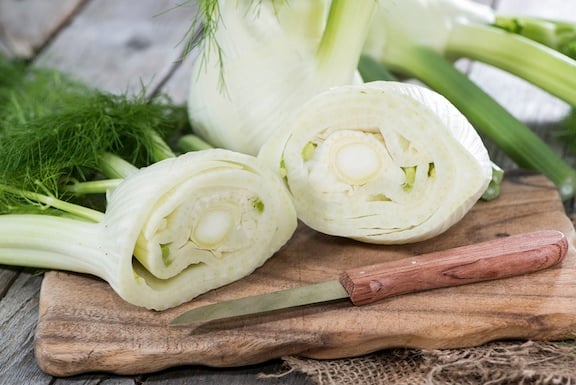 How to prep fennel

Wash with cold water. Cut off fern-like greenery at top (reserve it for garnish or last-minute flavor enhancer). Trim away the base, removing and discarding any discolored layers.

To prep the bulb: Cut away the celery-like stalks away where they meet the bulb. To cut into crosswise strips, cut bulb in half lengthwise; place cut side down and cut in half lengthwise again (if there is a core in center, generally it is small and doesn’t need to be removed, but if it’s large, cut it out and remove it with a small paring knife). Cut into crosswise slices. Or for braising, cut fennel into halves or quarters.

What about the celery-like stalks? Truth be told, they’re quite tough — definitely not for eating raw. You can chop them up and use in homemade vegetable broths; or steam them, then puree in a high-speed blender to add an unusual flavor to soup bases.

Can the feathery leaves be used? Absolutely. Use just as you would fresh dill, which these leaves strongly resemble (though they don’t have a similar flavor) — toss into soups and salads, and use as a garnish for just about anything. 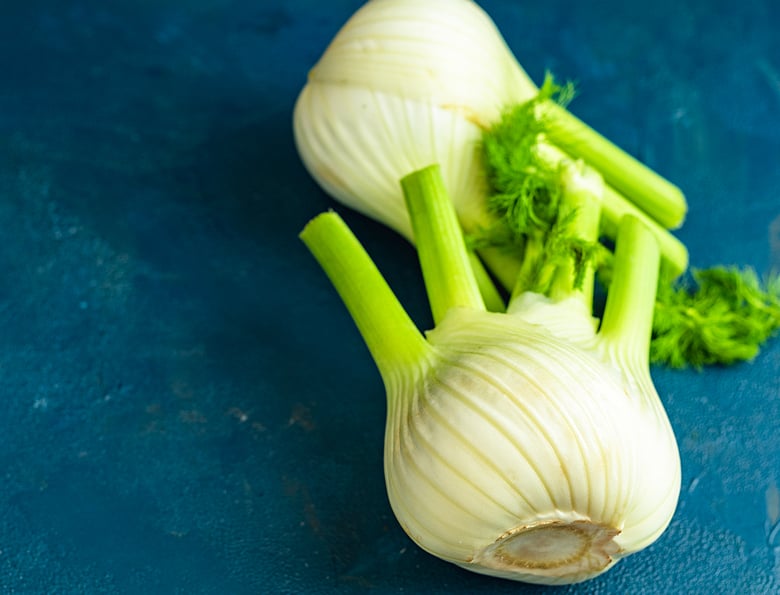 Fennel is very low in calories, has almost no fat, and is a modest source of fiber. It’s a good source of vitamin C and folate, and has an array of minerals. Apart from the major nutrients, fennel is also a source of antioxidants and phytonutrients. See the full nutritional profile of fennel. 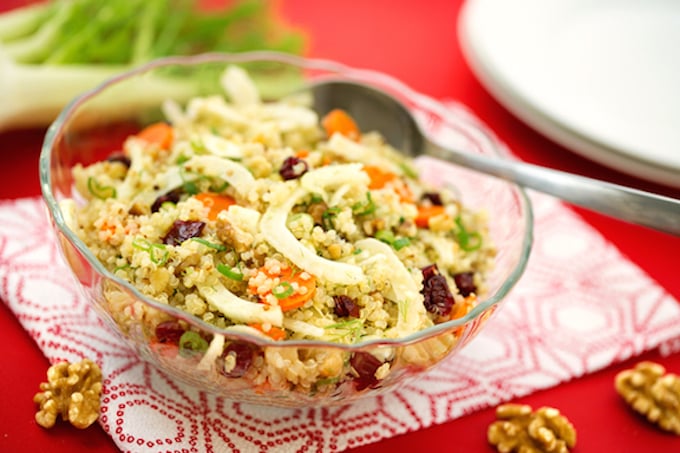 Quinoa and Fennel Salad with Walnuts and Cranberries

How to use fennel

An Italian favorite with pasta: In Italian cuisine, chopped fennel bulb is used in pasta sauces or steamed and tossed with fresh herbs and a basic vinaigrette. Try this luscious Fennel Pasta.

A celery swap-in: Substitute fennel bulb for celery wherever the latter is called for in raw or lightly cooked preparations.

Gratin: Fennel is a wonderful vegetable to use in savory gratins like Caramelized Leek, Fennel, & Onion Gratin.

Sautéed or braised fennel: For a basic preparation, cut the fennel bulb into chunks or strips. Sauté in a little olive oil over medium-high heat until golden and touched with light brown spots here and there. Stir often. If you’d like to continue the cooking process by braising, add 1/2 cup vegetable broth per bulb and cook for 10 minutes or so, until tender. Either way, season with salt and pepper. 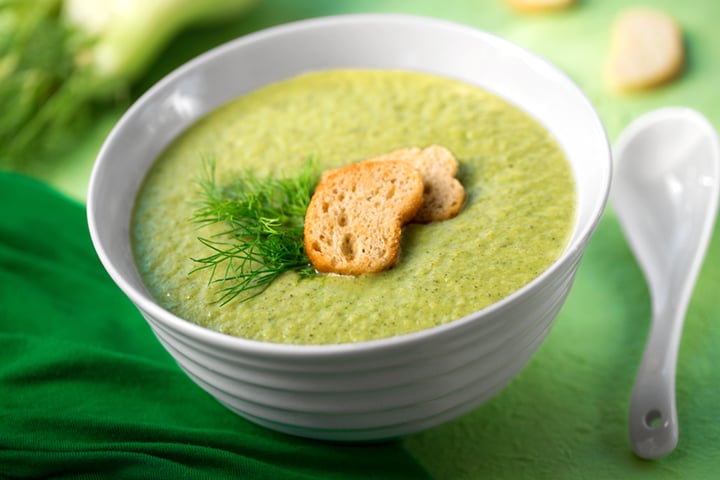 Roasted: Add thick slices of fennel to your roasted vegetable mélanges —it’s a lovely addition to mixtures featuring root vegetables. Or enjoy it on its own — see these simple recipes for Roasted Fennel with Garlic and Herbs and Roasted Fennel with Potatoes and Peppers.

Pickled: Bite-sized sections of fennel can be pickled just as you would any other kind of pickle. Use your favorite pickle recipe, swapping in fennel for cucumbers, let’s say, or try this Quick Pickled Fennel.

Grilled: Brush 1/2-inch-thick fennel slices with enough olive oil to very lightly coat. Cook on both sides on a medium-hot grill or grill pan, until tender-crisp and showing nice grill marks. If desired, toss with vinaigrette. Season with salt and pepper. Can be eaten hot or cold. 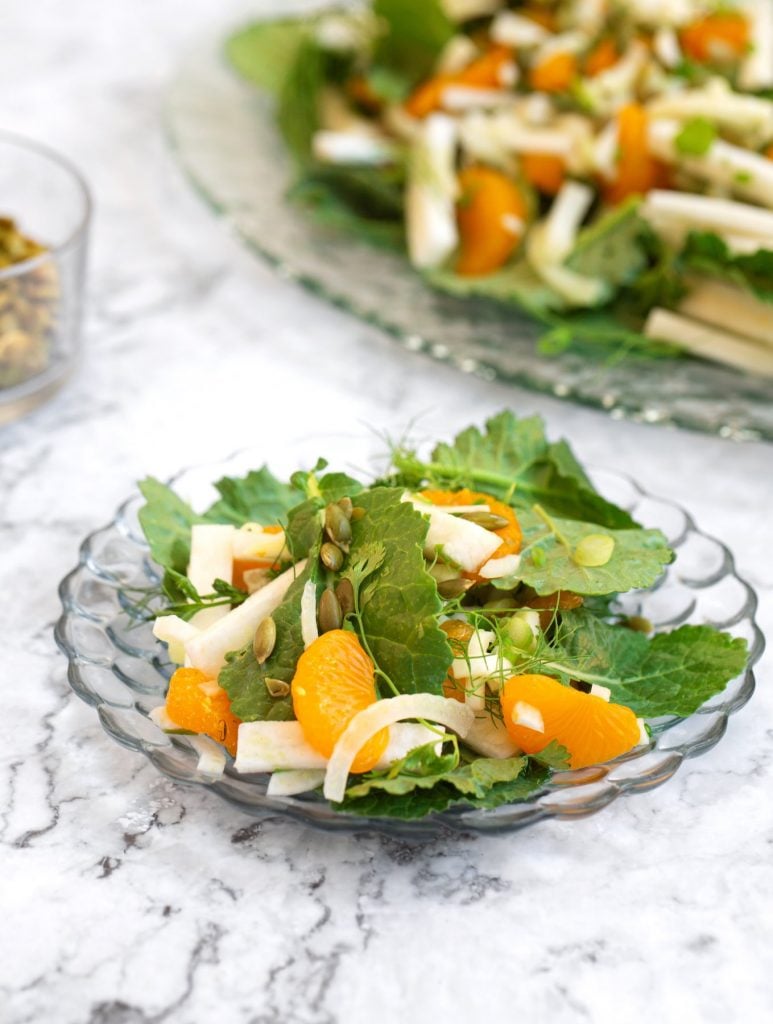 Salads of all kinds: Add thinly sliced fennel bulb (cut about 2 inches in length) to any kind of green salad. Citrus is a perfect companion, as seen in the recipe just above, Jícama and Fennel Salad with Oranges and Herbs.