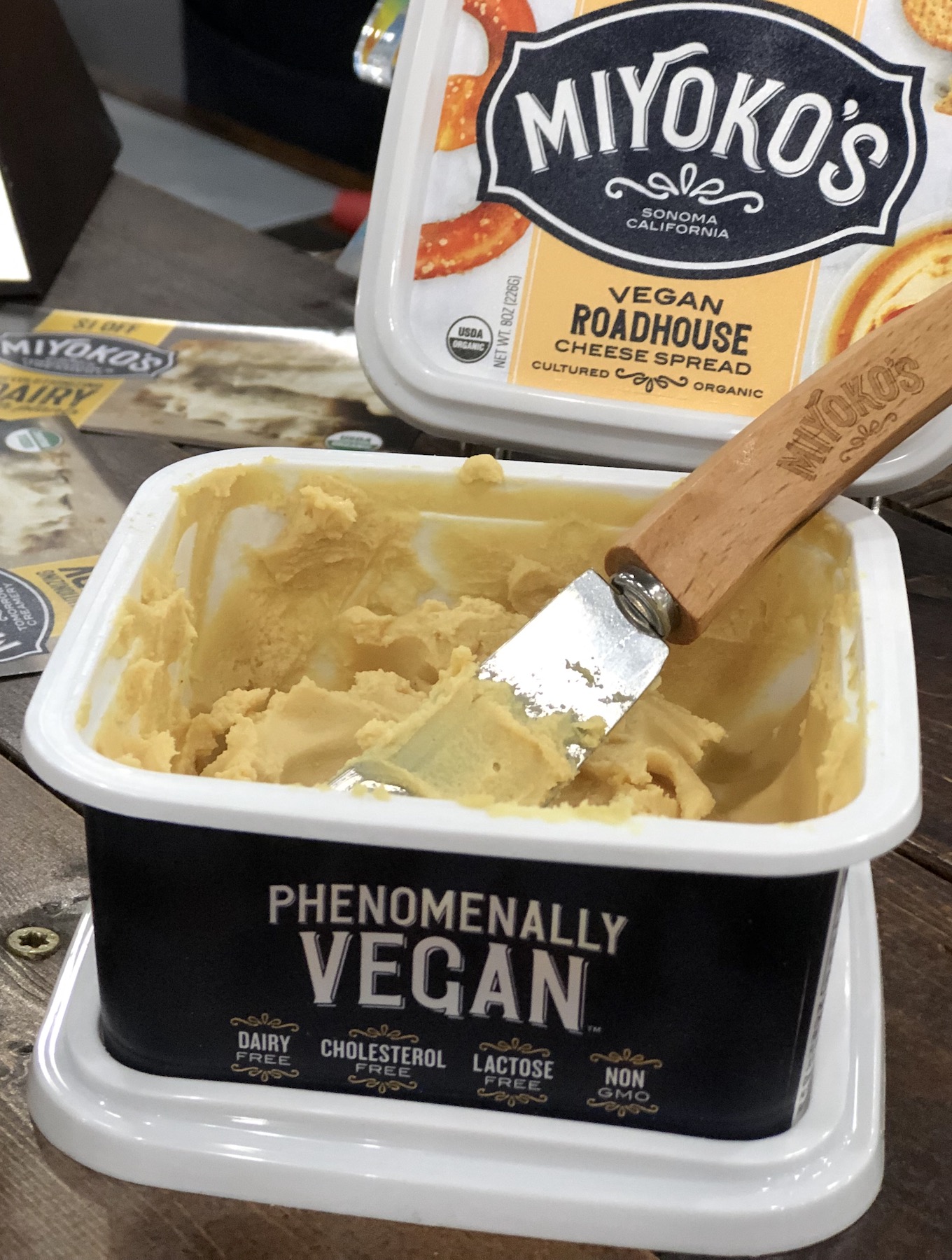 At the first-ever Plant-Based World Expo (which took place on June 7 and 8, 2019) at the Javits Center in New York City, I didn’t spot much broccoli or kale. There were scant few booths devoted to bean or nut products, though there was a scattering of specialty products like ice pops and vegan stuffed pastas.

What stood out in the exhibit area were the wide array of plant-based meats, cheeses, milks, and even seafood. In all, it represented a major shift in what these products are made of, how they’re defined, and the very language used to describe them. It’s no longer “meat alternatives” or faux meat; now it’s plant meats or plant-based meats. It’s not “cheez,” it’s just cheese (or sometimes called dairy-free cheese to make the distinction)— and so on. These foods just happen to be made from plant protein. 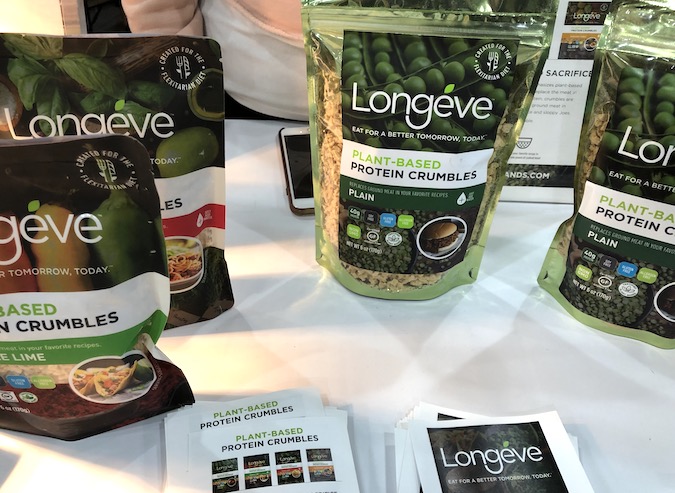 Pea protein is very big these days. Longeve was one of
many companies featuring products made from it.

The people behind the companies creating plant-based meats, seafood, cheeses, milks, yogurts, and the like, are passionate about mitigating the environmental crisis. They’re devoted vegans who want to stop the exploitation and mass slaughter of animals. But they’re also smart entrepreneurs. They know they have to meet the general public where they are at the moment.

And so, these kinds of products are being aimed squarely at omnivores and those who follow a flexitarian diet, which emphasizes plant-based meals most of the time. That’s not to say that committed vegans don’t have an appetite for plant meats once in a while, a major source of umami to add to stir-fries, stews, and more. 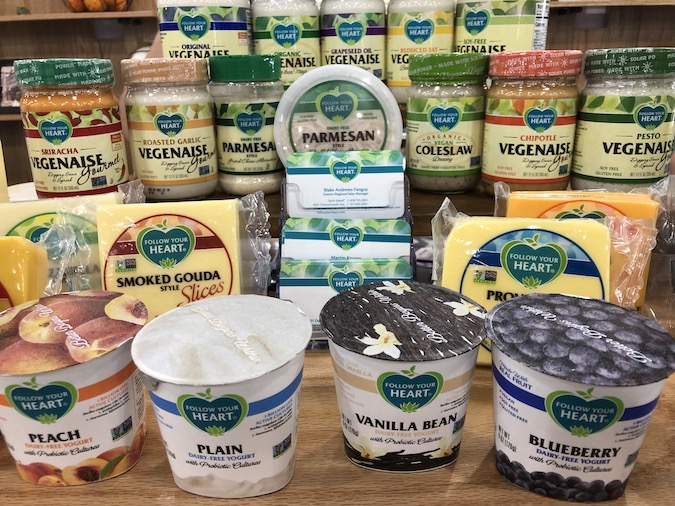 Follow Your Heart® is one of the pioneers in the plant-based world —
I consider Vegenaise® its own food group!

The major players in the plant protein space are looking to disrupt the notion of meat. There’s a lot of research and development taking place to re-create the familiar textures and heartiness of meat. The aim, at least for the bigger players like Beyond Meat®, is to position the products in meat departments. Or, as one speaker put it, what will hopefully be called the protein department in the not-too-distant future. This echoes the path that nondairy milks took to earn their place in the dairy case, side by side with dairy milk.

Interestingly, the many food demos that took place during the expo emphasized fresh ingredients to make simple summer soups, vegetable side dishes, and dishes featuring now-traditional plant proteins like tofu. This demonstrated that those of us (myself included) who gravitate more to the vegan whole foods approach see these movements as growing side by side, and definitely not one versus the other. Plant meats are quickly taking their place in food service and restaurants, but home cooks also have a growing array of options.

If there was one big takeaway, it was that this is a moment that’s becoming a movement. The speakers who have been in the food industry kept emphasizing that never have they seen an acceleration of demand for any product like they’re seeing with the plant meats. Anyone following the news has heard of Beyond Meat’s staggering IPO, the most successful in recent history. Beyond and Impossible are struggling to meet demand, especially in the restaurant space. 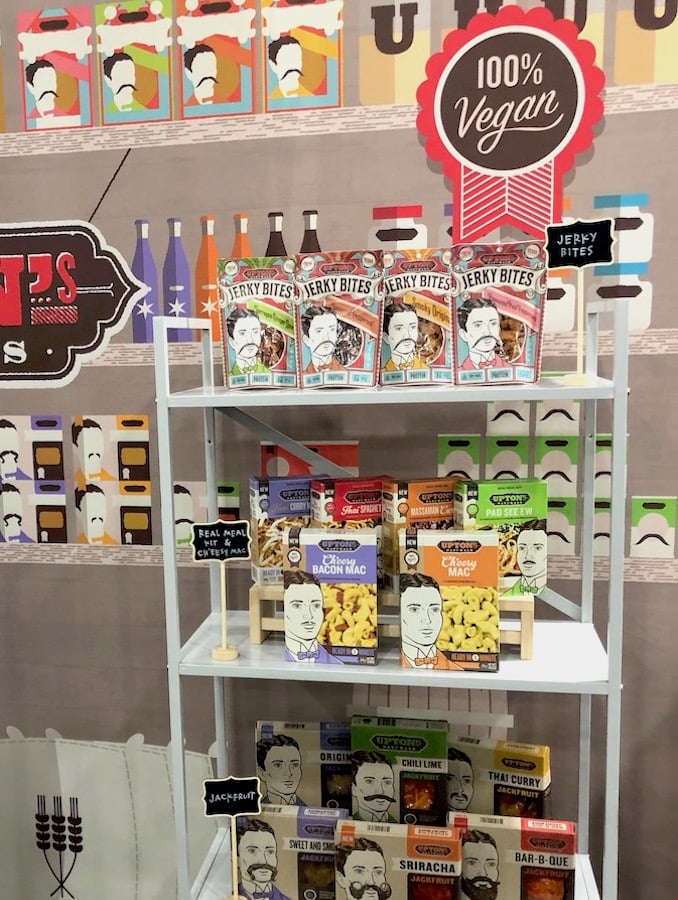 Innovative companies like Upton’s Naturals® were in full force

For the consumer, it was emphasized at the conference, food is the most powerful, accessible way to participate in helping to mitigate the climate crisis. Now, the entire concept of “meat” is being defined by composition rather than by origin.

Whether made from pea protein (which is very big right now), non-GMO soy, or other plants, a serving of plant protein uses 99% less water and 93% less land than animal protein. So while governments dawdle about protecting the environment and animals, socially responsible entrepreneurs and investors are taking control of the narrative and driving the change that’s needed.

As Seth Goldman, Executive Chair of Beyond Meat stated in his keynote, there’s nothing about meat that can’t be replicated with plants. And with the growth in scale and accessibility that’s currently happening, their vision includes the ability to underprice meat. 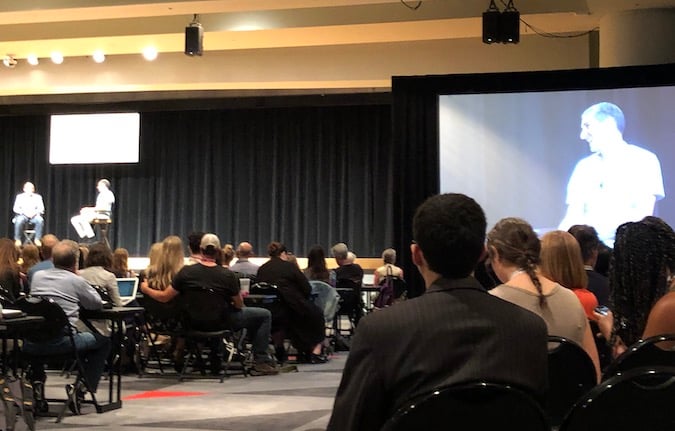 Seth Goldman, Executive Chair of Beyond Meat, looked very happy during his keynote.
Can’t say I blame him … the company is doing good and doing very well!

I caught only the tail end of the first keynote on Friday, June 7, titled “The Growth of the Plant-Based Food Industry.” It was primarily aimed at attendees and exhibitors who were brands, retailers, and food service operators, and discussed the challenges of this young industry in the face of almost overwhelming growth.

“Turning a Mission Driven-Business into a Mainstream Revolution” was the title of the second keynote on June 8, and the one that I attended in full. It was a live podcast with Nil Zacharias, founder of Eat for the Planet, and delivered as an informal Q & A with Seth Goldman, Executive Chair of Beyond Meat. Seth talked about how his first company, Honest Tea, was bought by Coca-Cola, and how his passion to bring a less sugary, fair trade beverage market has translated into his role at Beyond Meat.

Speaking with a glowing smile and a sense of gratitude and humility, I very much enjoyed learning more about Seth himself as well as the mission of Beyond Meat. Seth called this first Plant-Based World Expo “a celebration of a breakthrough moment.” Indeed, Beyond’s IPO has demonstrated that there’s a huge appetite for change. It has been the most successful IPO in some twenty years, helping to legitimize the notion that this is not a fringe movement but a mainstream approach to a much-needed change in the food system.

While governments dawdle about protecting the environment and animals, socially responsible entrepreneurs and investors are taking control of the narrative and driving the change that’s needed.

This was taken pretty early on the first day;
it doesn’t begin to capture the crowd and enthusiasm on the floor

The final keynote, “Plant-Based Playmakers,” closed out the expo on Saturday, June 8, but at that point, I’d already left, my head spinning with all the excitement, and my inner introvert shutting me down after being among thousands for the better part of two days. The speakers were Derrick Morgan, linebacker of the Tennessee Titans, and his wife, Charity Morgan, a plant-based chef.

I wish I’d had the energy to stick around for it because it must have been an inspirational finish to a fantastic event. As described in the program, “Derrick and Charity will share their story of breaking down barriers by bringing plant-based eating into the NFL locker room and discuss their vision for the future of sports, food, and nutrition.”

There were ongoing food demos on the culinary stage; many to choose from, but with all that was going on, I sat in on about four of them. It was hard to catch good photos from the distance from which I was sitting, so for that, I apologize.

Interestingly, the demos focused on whole foods plant-based cuisine and not the plant-meats and cheeses so prominently represented on the expo floor. For me, this emphasized that a whole foods diet should be paramount for the home cook. Incorporating plant meats and cheeses once in a while can be a fun indulgence for the committed vegan, and they serve as a bridge to a plant-based diet for those who are currently omnivores.

As Miyoko said in her epic talk, “A little indulgence is good for the soul.” So even if you enjoy your plant-based burger or sausage, you still need to use plenty of fresh produce and other whole foods for balance! 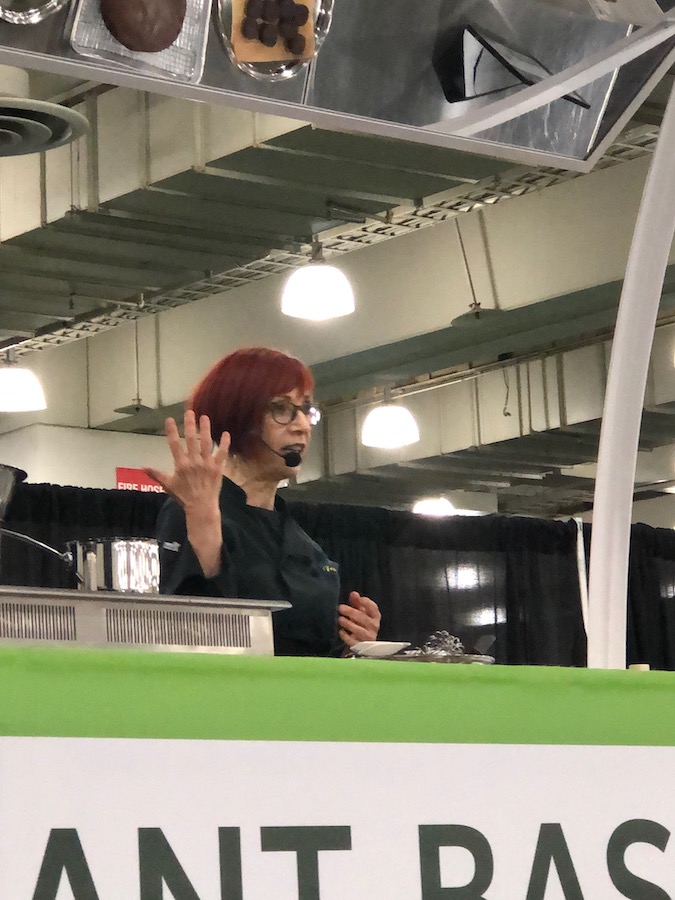 Speaking of indulgence, here’s my good friend Fran Costigan, AKA The Queen of Vegan Desserts, demonstrating her easy chocolate ganache. Chocolate (fair trade and vegan, of course) is indeed good for the soul. 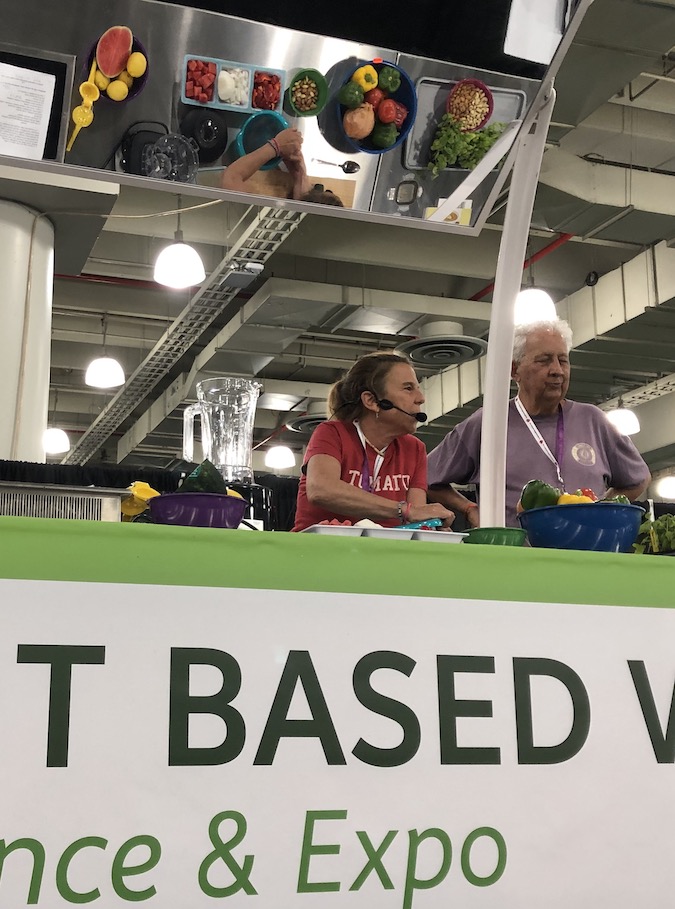 Joy Pierson and Bart Potenza, owners of the groundbreaking Candle Café and Candle 79 in New York City, demonstrate a fresh and easy gazpacho. 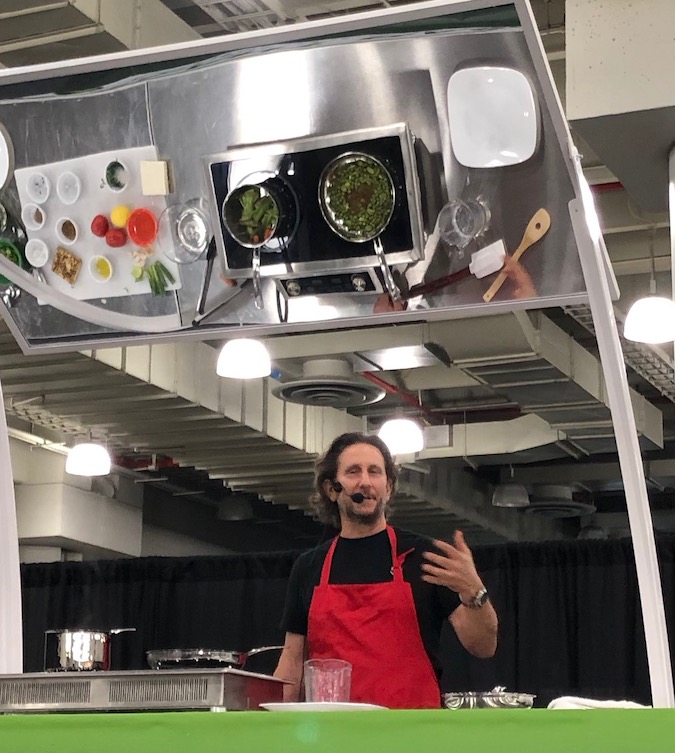 Rich Landau of the innovative restaurant Vedge in Philadelphia, in a short time, showed how to make a rich vegetable stock, a spring vegetable ragout, and hearty tofu steaks. He proved that delicious vegan meals don’t have to be complicated.

I grabbed some shots of just a few of the exhibitor booths at the expo, not only because this post would have become even more ridiculously long than it already is. Also, it was often hard to concentrate on getting a good shot because so much was going on and it was hard for me to focus, literally and figuratively. Here’s a small sampling: 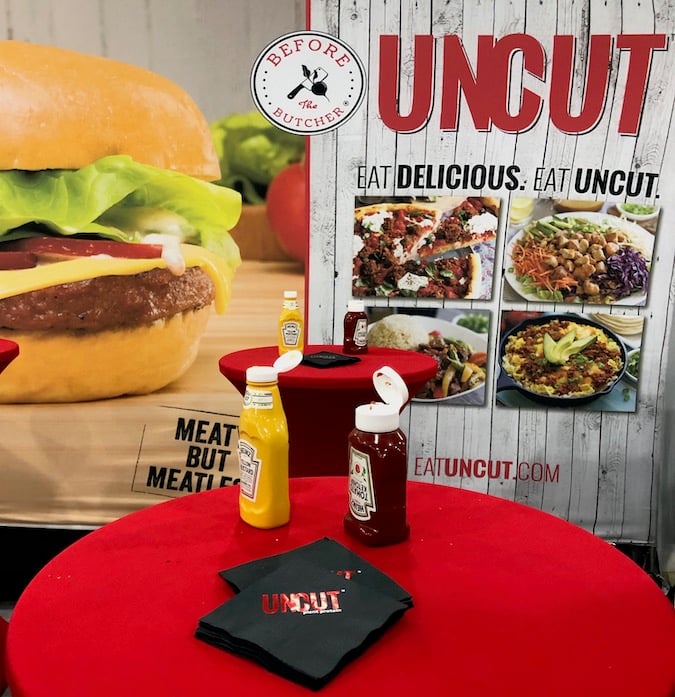 Before the Butcher® Uncut makes a wide array of plant meat products
and is expanding rapidly into stores nationwide. 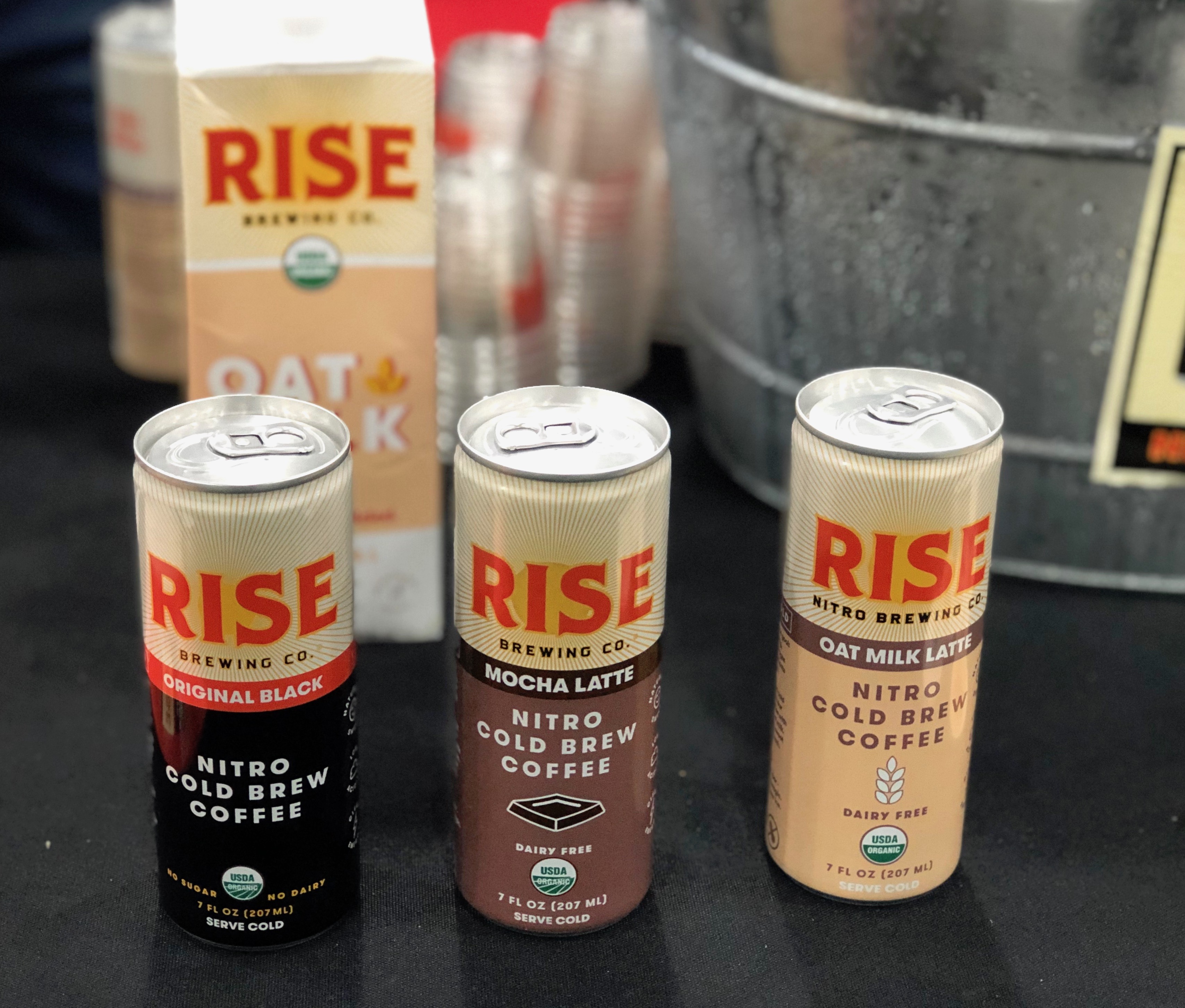 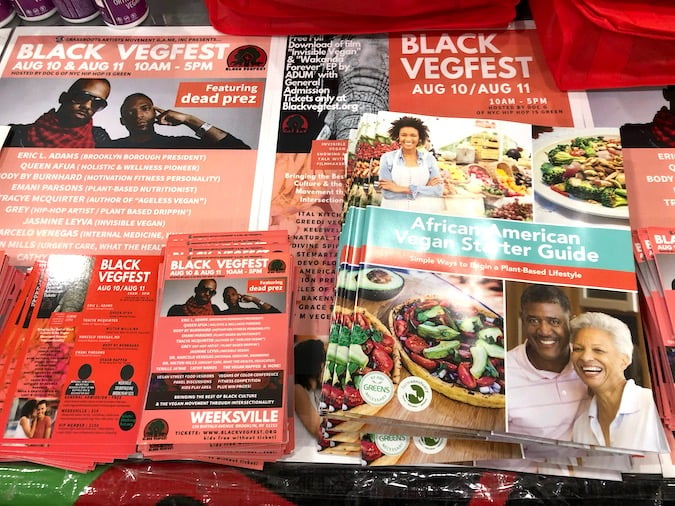 Black Vegfest is happening in Brooklyn, August 10 & 11 2019.
The vegan movement seems to be quite intersectional. 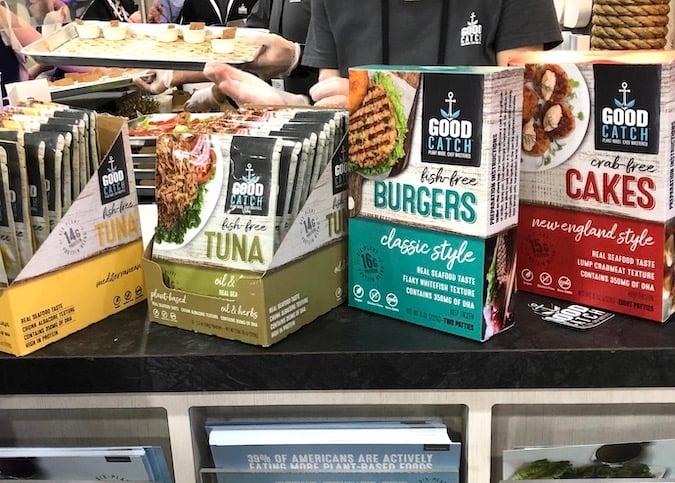 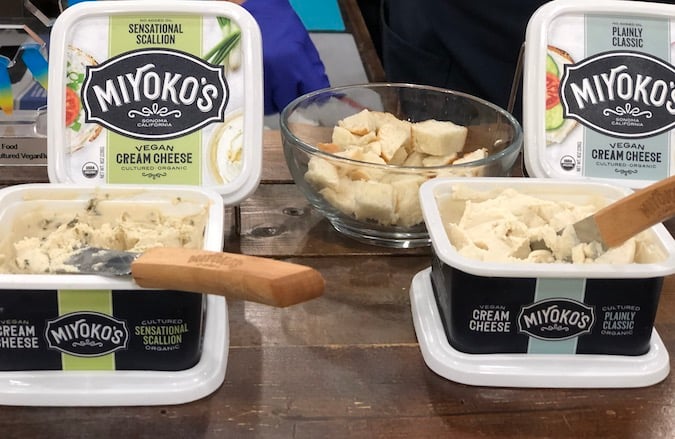 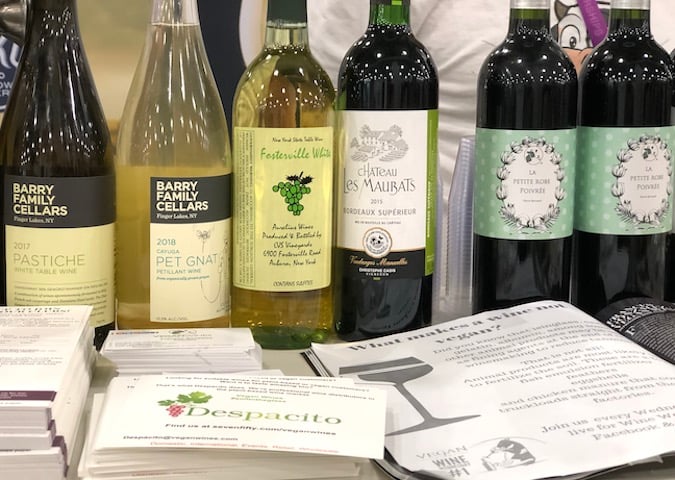 What goes better with vegan cheese than vegan wine? Sunny Gandara and Frances Gonzales,
owners of Vegan Wines, contributed
this article on what makes a wine vegan to our site. 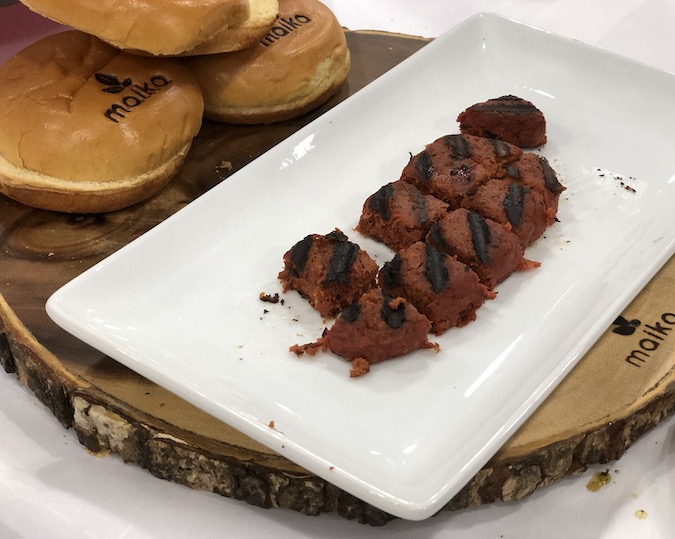 Maika® makes a line of veggie steaks and dogs based on
pea protein that are gluten-free as well. 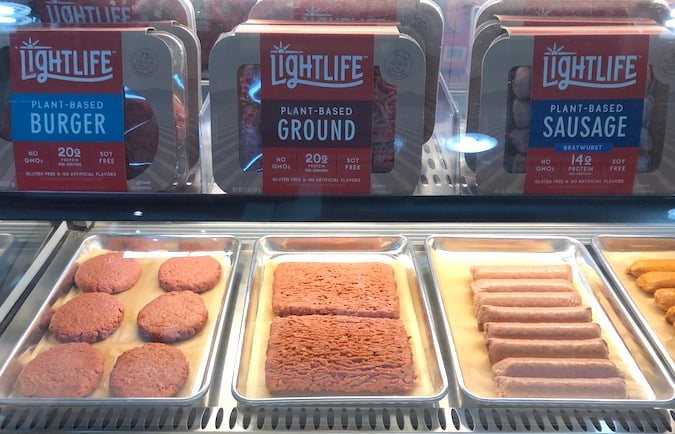 Pretty soon we’ll be seeing plant meats like these by Lightlife®, and surely from
Beyond Meat® and Impossible Foods®, right alongside regular meat in delis and
supermarkets. Hopefully, these will replace animal-based meats sooner than later. 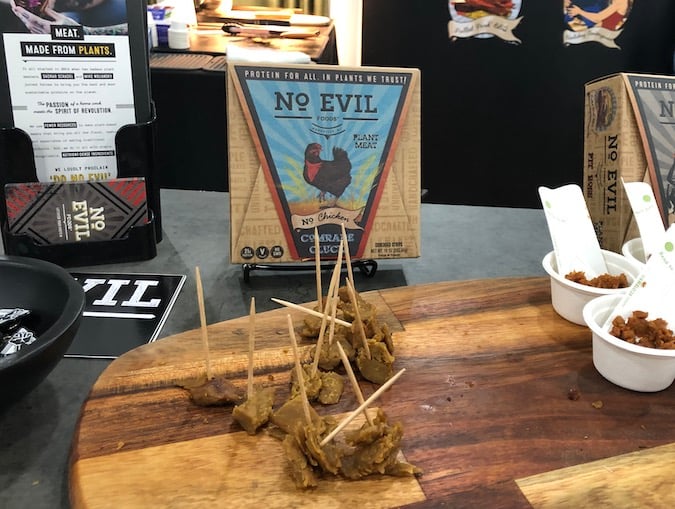 No Evil Foods’® plant meats is an upstart from the Asheville, North Carolina area.
Their products are showing up on many grocery shelves. 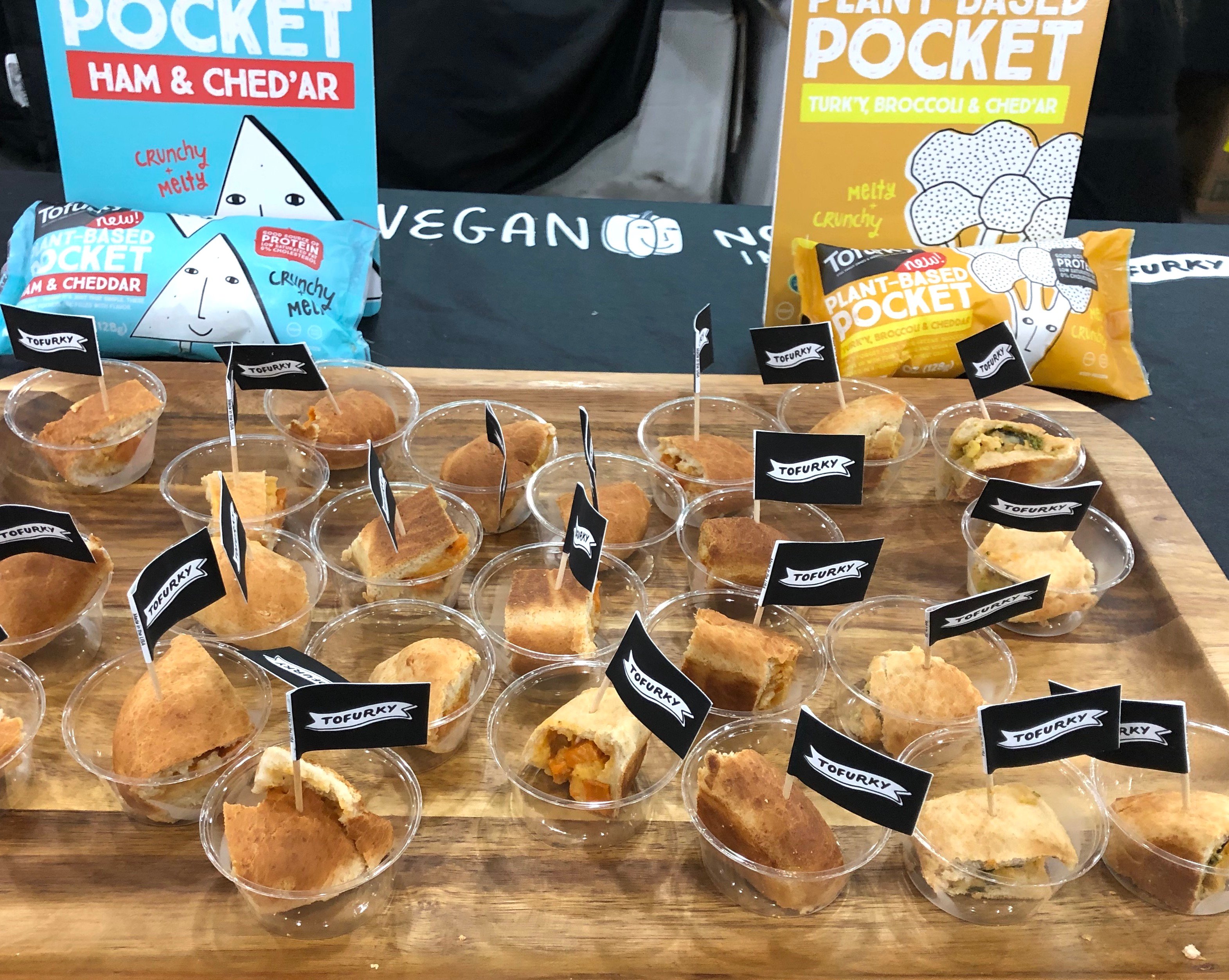 Tofurky® is an iconic brand, known for vegan sausages, deli slices, and holiday roasts.
At the expo, they treated attendees to samples of their new hot pockets. 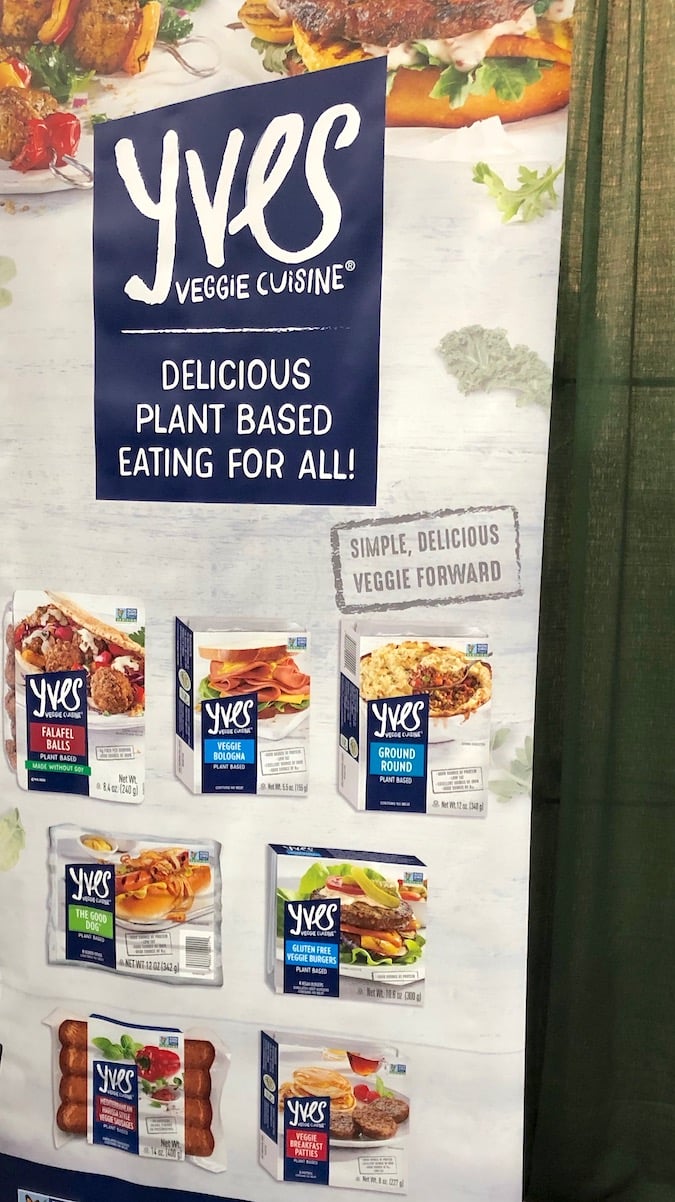 Yves Veggie Cuisine® has been in the plant-based meat space for a long time, as well. 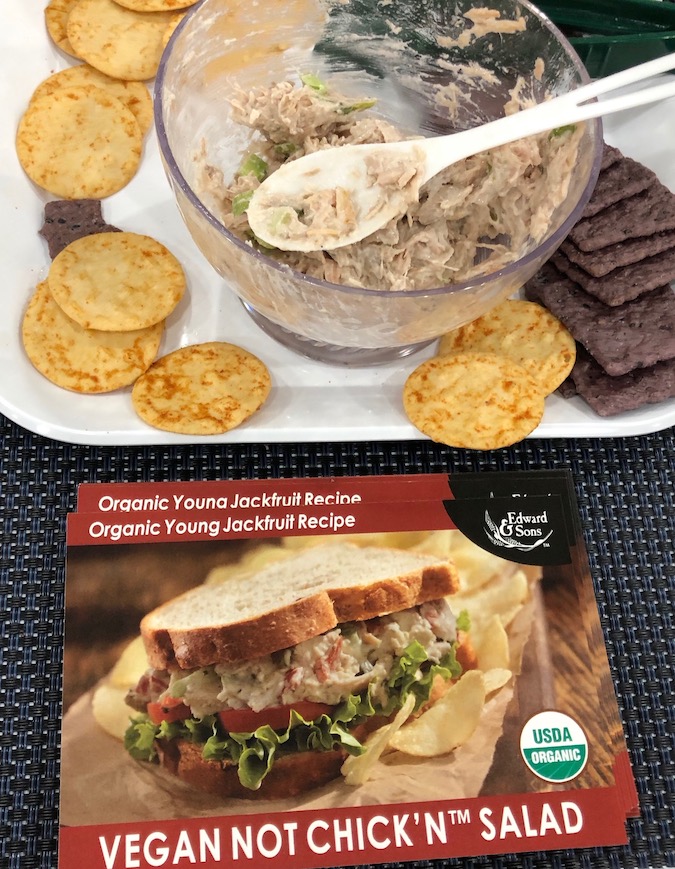 Edward & Sons has been a distributor to the natural foods market for decades.
Their Vegan Not Chick’n™ Salad, made from young jackfruit, was devoured. 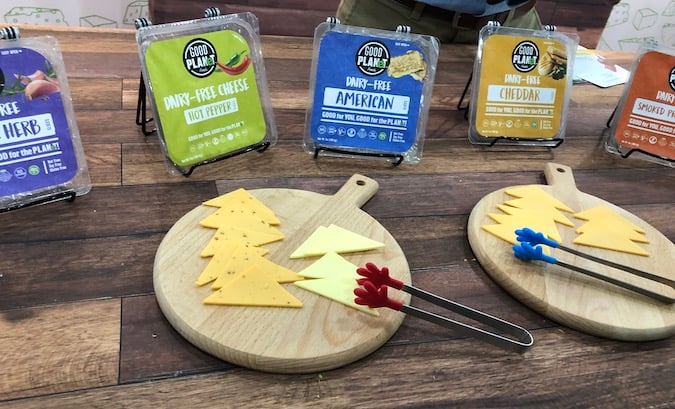 Good Planet® dairy-free cheeses have a great melt, or can be enjoyed as is! 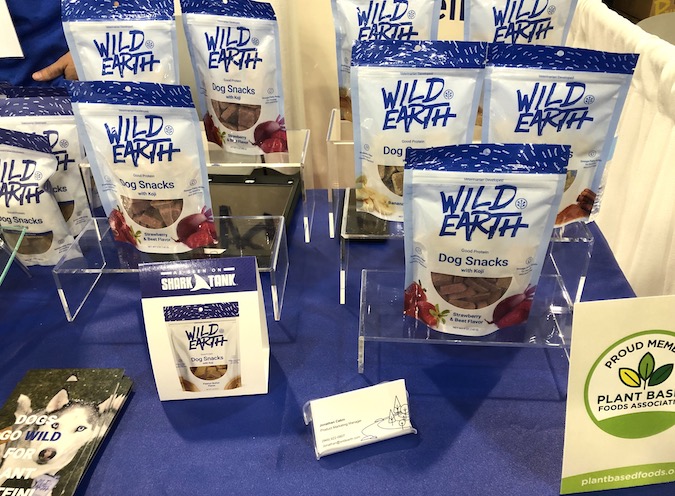 Our companion animals deserve plant-based snacks too, don’t they?
Wild Earth® Dog Snacks comes in so many canine-craveworthy flavors. 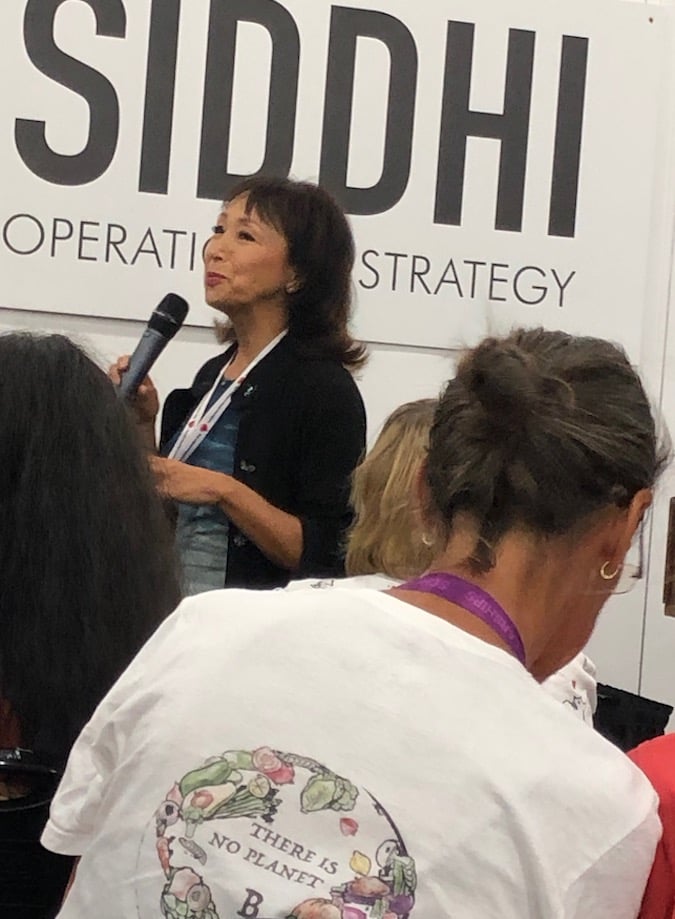 One of my favorite sessions was Miyoko Schinner’s talk, “From closet vegan to vegan evangelist.” While waiting for everyone to be seated, she sang us some Gershwin tunes. She has a good voice! Is there anything she can’t do? I’ve known Miyoko, not well, admittedly, for a long time and wasn’t aware that she also started an animal rescue sanctuary that houses 70 animals. My guess is that she’s pretty much given up on having time to sleep.

Plant-Based World Expo 2019 was incredible — so thoughtfully done and action-packed, even though it was the first ever. I hope this event happens again next year, whether in NYC or elsewhere. If it does, I predict that it will double in size and scope. Being the first ever conference and expo of this type, it was incredibly well organized, and, judging by the crowds, very well promoted. There were professional sessions for people in the industry, and for more casual attendees like myself, lots of free talks and food demos that were well done and educational.

Though my personal emphasis has long been on an ethical vegan lifestyle and the whole-foods plant-based approach, I’m “Beyond” thrilled that plant meats and cheeses are already having such an enormous impact on the market. Plant-Based World Expo will be back in New York City on June 5 and 6, 2020.

See more of our Tips & Trends.